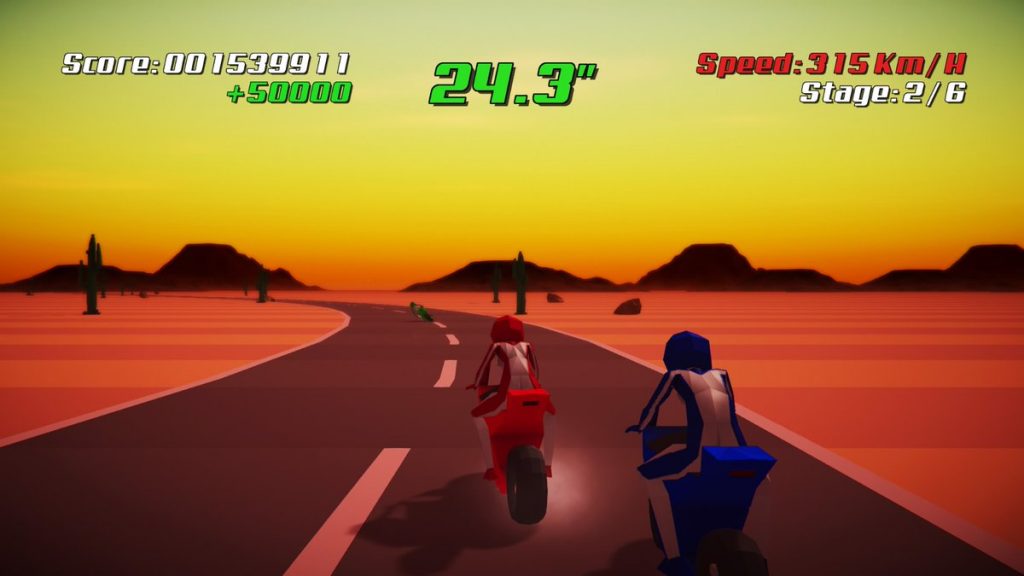 The video game industry, as broad and as diverse as it is, features very few distinguishable and truly unique titles. And most games wouldn’t be much different if they bore a name ‘Military Shooter 420’ or ‘Racing Simulator 69’. And while most games are nothing more than your usual run of the mill ‘’products’’, then throughout the years we all had a chance to play certain titles, which we remember fondly to this day due to their unique gameplay, or aesthetics. And one of such games is the highly regarded Out Run. A title so unique, and so easily recognisable, that developers world over have been trying to copy it, or rather replicate it, since 1986.

Over the last thirty years many have tried to create a game worthy of sharing the pedestal of arcade racers, with the abovementioned Sega classic. However, no matter how hard they tried, they ultimately have all failed. And the story of the recently released Super Night Riders by Neko Works, is not much different, because just like the multitude of all the other Out Run copycats, it tries its best to replicate its charm, appeal, and excitement, but ultimately fails at each and every single hurdle. Because just like all the other copies, it does its best to try to replicate Sega’s racer, but at the same time does very little to differentiate itself from it. 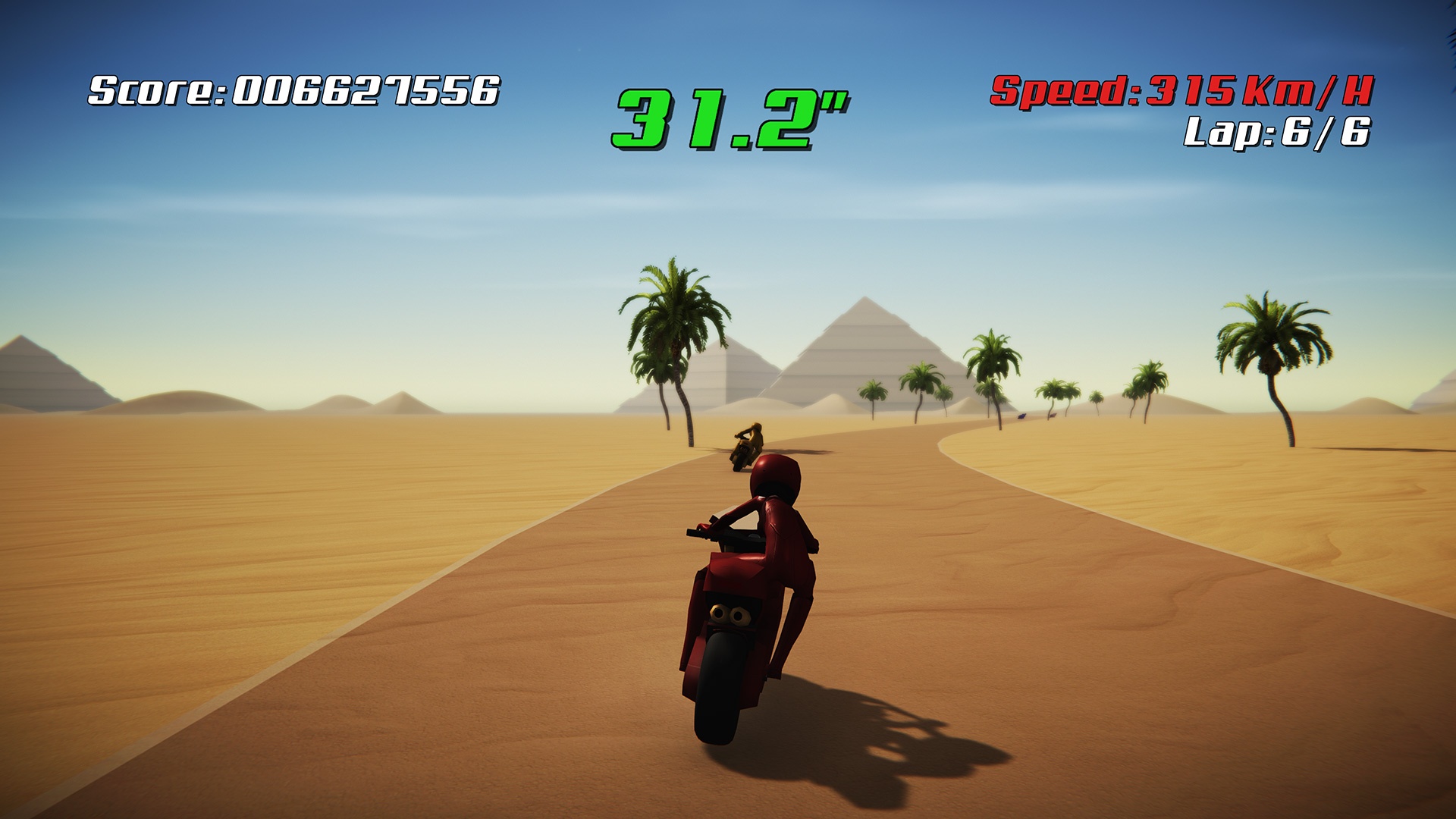 The biggest difference between Out Run and Super Night Riders is the fact that the latter features motorcycles, rather than the iconic Ferrari’s. And if not for the fact that Super Night Riders features some, but not many three-dimensional elements, it would be the one and only difference between the two. But considering that the models in question are not of the utmost quality, I would not brag about them too much, if I were in the developer’s shoes. And that’s because they are simply not that great – in fact they are rather unpleasant. And can be an eyesore, if one plays the game on lower difficulty settings, and has time to look at certain details, such as the rather rough models, or the overly simplistic textures which entail them.

As far as gameplay goes, Super Night Rider and Out Run are virtually identical, as they both have you go down a bendy track at high-speed, while bobbing and weaving between other racers, while trying to reach the next time gate. And while such approach to gameplay is not exactly original, as it copies other racers of this particular sub-genre to a point, then it has to be commended for its somewhat impactful sense of speed, which as most of you know, the vast majority of Out Run copycats lacks. But that being said, if you are looking for an Out Run’esque game with a great sense of speed, then you are much better off simply playing the classic. Because as good as Super Night Riders might be, it is nowhere near the original, in fact it is not even in the same neighbourhood.

Super Night Riders is in no way, shape, or form unpleasant, nor offensive. It is unfortunately much worse, as it is an unambitious, mundane, and largely spineless arcade game, which offers no excitement, entertainment, nor challenge. And there would be nothing wrong with it if it was a free-to-play mobile game with unlockable, rather than a pay-to-play console release, with nothing significant to unlock. And this is perhaps might be the greatest gripe with the title. As besides simply driving in circles, there is no other significant aim, nor objective. And if not for the rather easy Platinum Trophy, which can be earned in under two hours, Super Night Riders would simply have no inherent value. 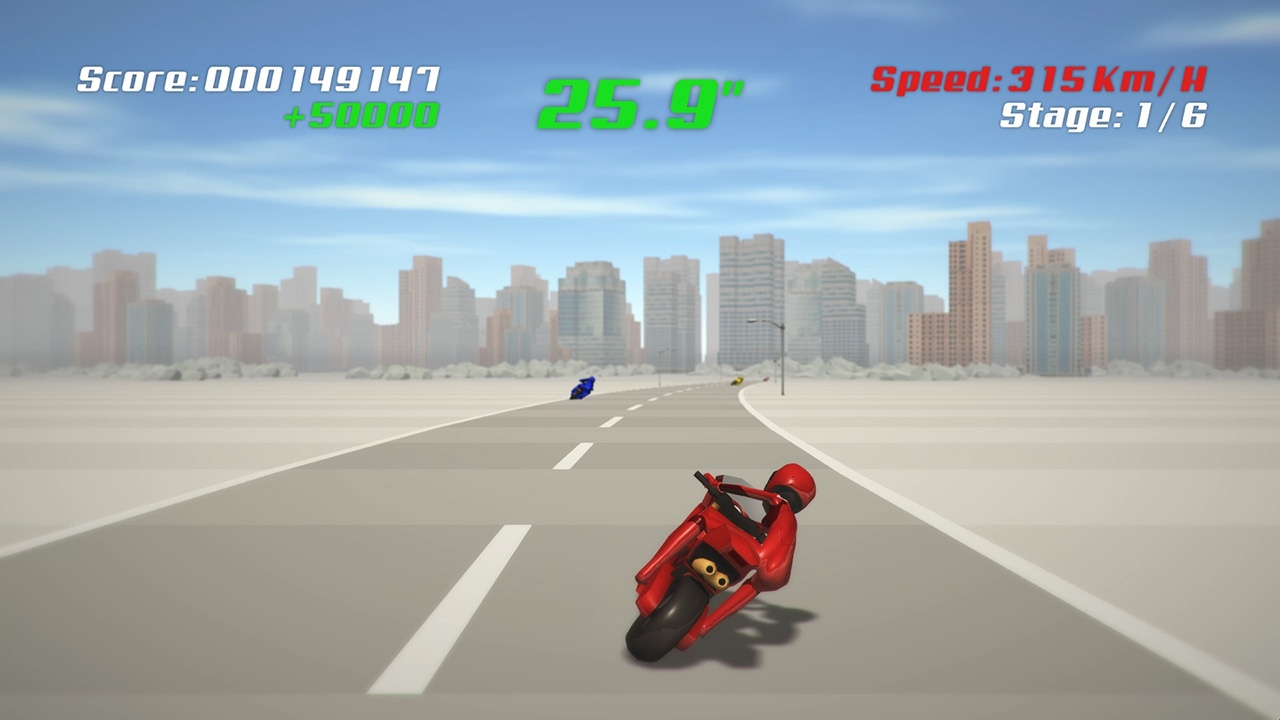 As a consumer product, Super Night Rider has very little to show for itself. And what it possesses doesn’t shine particularly strong either – as you already had a chance to see for yourself. But ultimately, this title will not be judged by the features and attributes which it possesses, but by the things it lacks. And unfortunately, it lacks a lot of basics, such as the aforementioned unlockables, auxiliary modes, and ultimately any form of quality. And as harsh as it may sound, it is ultimately true, as from the splash screens, all the way down to the in-game tracks, Super Night Riders is simply not good enough to be called average, as many of its components, such as the main menu, are miles below par. And if not for the fact that it works relatively well, and is only 123MB small, it would probably now be in the depths of the PlayStation Store alongside classics such as The Life of The Black Tiger, Alekheine’s Gun, or the now infamous, Honor_And_Duty:_Arcade_Edition.

Ultimately, Super Night Riders does not feel like a complete game. It does looks and play like a promising game demo, or even an alpha of what would become an indie classic, but not a complete and ready to sell product. And for that reason, it simply cannot score it any higher. And if not for the fact that it is a fully playable game, with a couple of redeeming features, the score probably would have been much, much lower. But even then, I simply cannot recommend this title to anybody at its full price, but if you happen to come across it during a sale, where it costs less than £2, then you should go for it, as the Platinum Trophy is easily worth that price alone.

Super Night Riders feels like a tech demo, of what could otherwise be a fairly entertaining title.