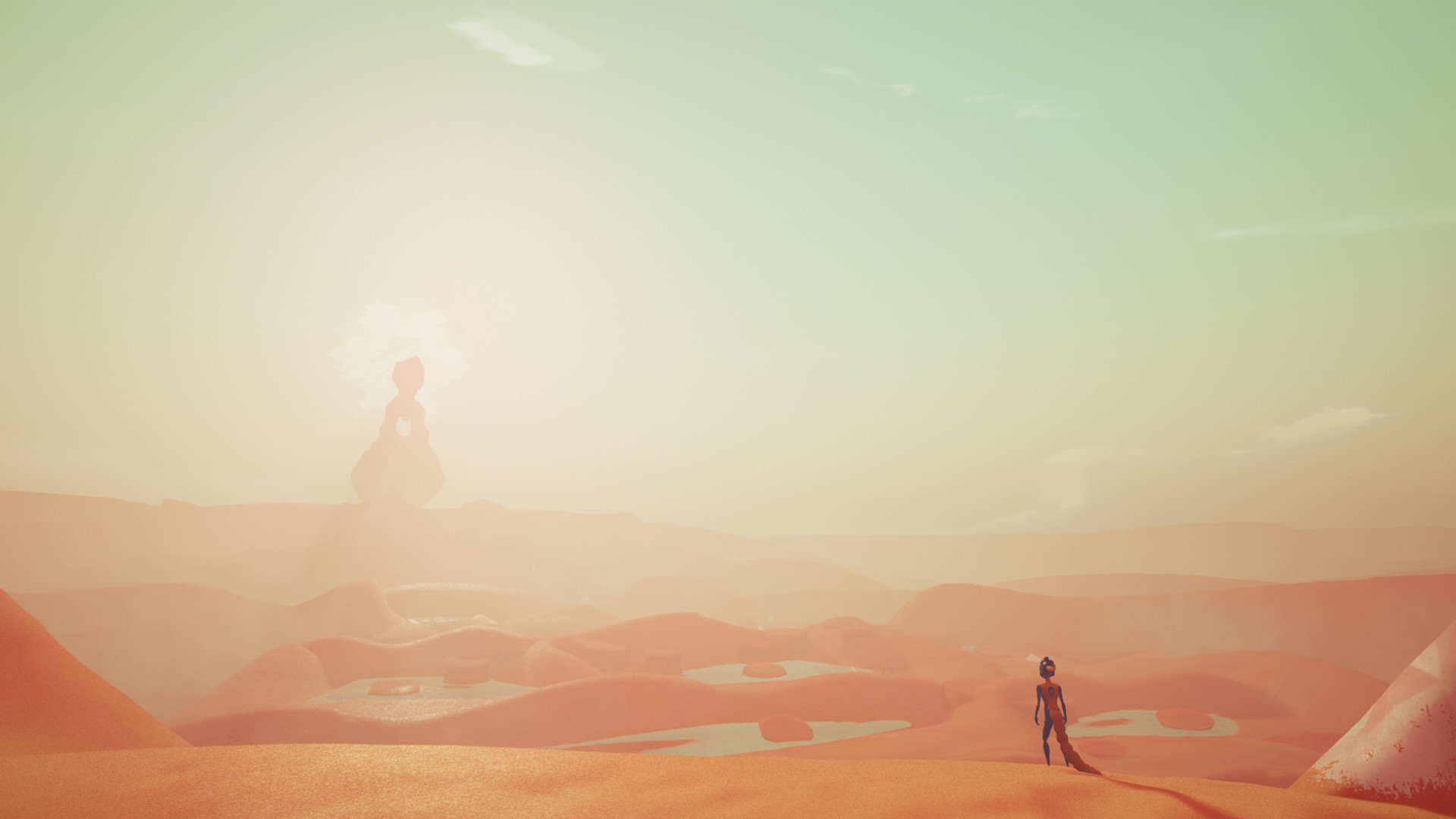 Areia: Pathway to Dawn deserves all the credit it can get for trying to do something different, and as a concept and an idea certainly have a lot going for it. The graphical style and soundtrack have an intentional mystical Eastern vibe, and in places it’s actually a very pleasant and satisfying experience, with a fair bit of symbolism thrown in for good measure.

Unfortunately, it has also been variously described as a relaxing journey full of harmony and spiritual ambience, a mystical adventure, and a path towards enlightenment. And while it hits a few of these buttons, it cannot capture that essential magic that makes a game fun. And in places proved so frustrating that I almost gave it up as a bad lot.

This is clearly just a beautiful but flawed puzzle platformer, but with minimal puzzle elements and without the danger or thrill of things trying to catch or hit you – if you ‘fail’ at any point, or ‘fall off’, you’re spiritual avatar just pops back up in the last place you were at, although this could frustrate if you’ve somehow ended up on the wrong edge of a dodgy rock… Similarly, if you travel in the wrong direction, a prevailing wind howls, slows you down and throws snow at you until you turn around again. I’d go so far as to suggest that although the game feels like it puts you on a set of rails to guide you from one landscape to the next, it’s still possible to find yourself lost within a few of them, and this can prove really frustrating if you’ve somehow missed an important jump or link somewhere. 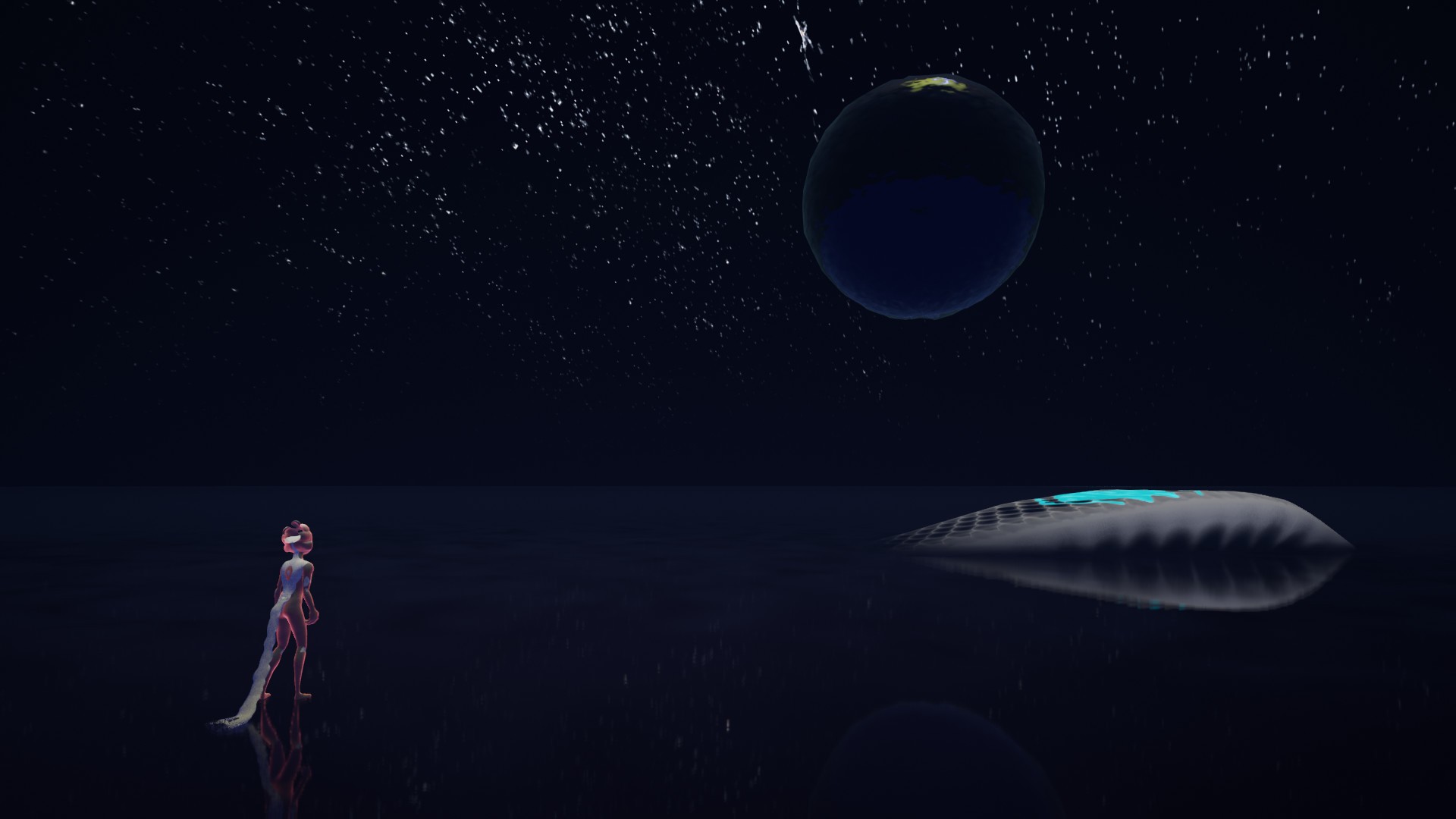 Areiaplaces you as a free spirit wandering gorgeous landscapes on a journey towards… well, I’m not really sure. The light? Enlightenment? A personal confrontation? There’s a distinctly spiritual undertone that is no doubt related to Eastern mythology and symbology as you journey from one place to the next, but most of this went completely over my head, and makes no difference whatsoever to the actual game experience. And here’s where my cynicism gets the better of me: although the intention of this game is to present you with some kind of relaxing spiritual journey – the music is very otherworldly, and has a pleasant flute-like lilt and melody – you’re not actually given anything to work with initially, other than a pretty opening scene which dumps you amid a red desert with no clue as to where you should head or what you should be doing.

All the game menus are keyboard-based, most of the spirit avatar’s movements are also key-based (classic WASD-style with the spacebar to jump, btw), but the game doesn’t actually tell you any of this, and despite a couple of rare initial in-game prompts inviting you to click the left or right button on your mouse to get your spirit to either sit down and assume the lotus position, or start building a sand bridge from collected water – that’s pretty much the full extent of the controls. And yes, you heard correctly; you collect water and (symbolically?) mix it with sand to make bridges which allow you to progress, which is where the platform element comes in.

I was originally drawn to this game because of the way it looked – nobody could argue that it isn’t a gorgeous on-screen creation: the landscapes are stunning, the soundtrack quite chilled out and relaxing, and the game doesn’t ask much from you as a player, but… as mentioned before, this is where the rub is for me. There is little or no game here at all, and the puzzle element is minimal at best: journey to the puzzle site, create unbroken paths between the same coloured flowers without crossing them with others (don’t cross the beams!), and then sit on the designated space in the ‘portal’ so it can change the scenery and throw you into the next stage. 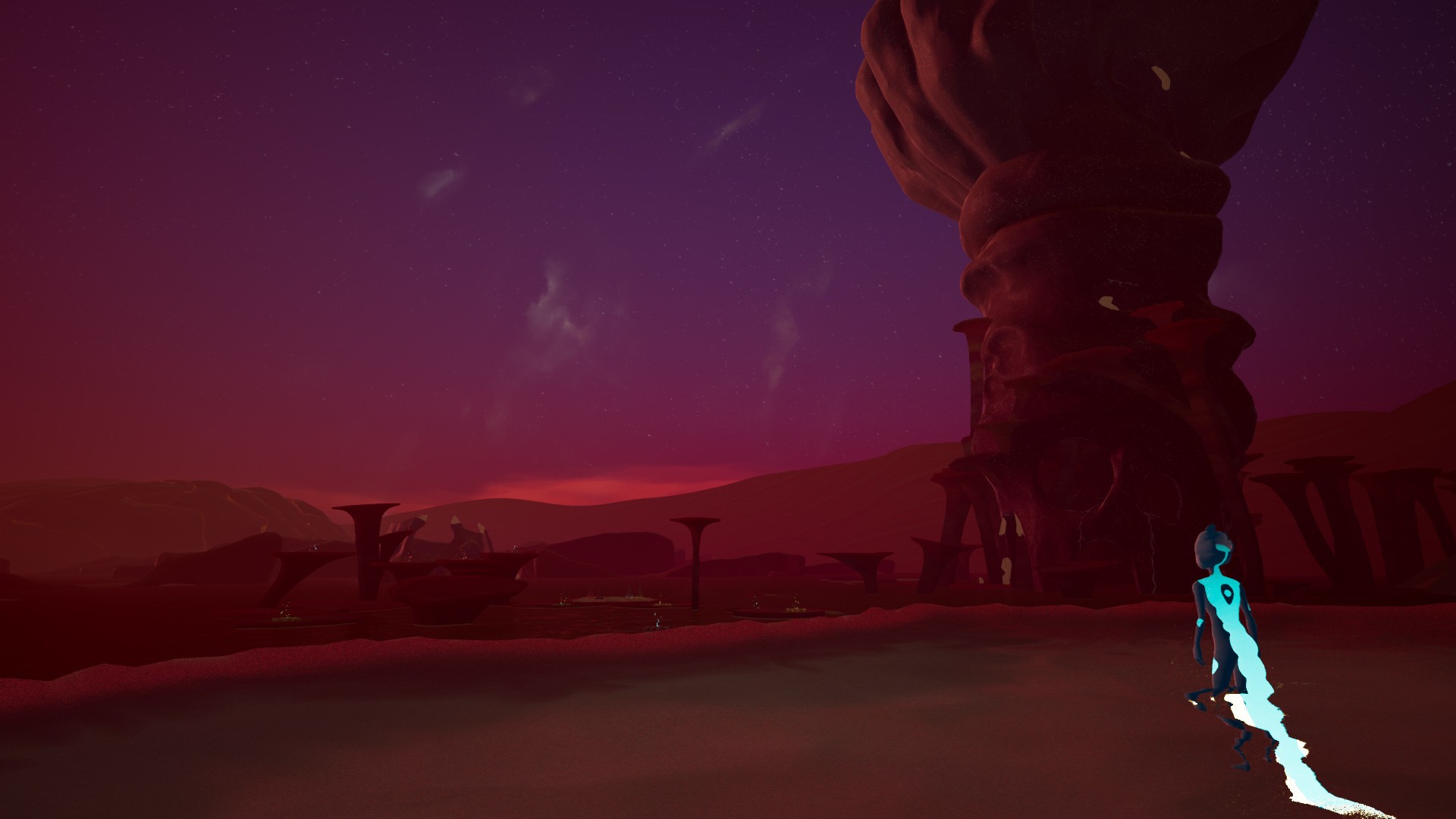 In a nutshell, that’s it – you move your spiritual avatar through pretty landscapes, jump between some bits, create paths to other bits, and solve the odd flower puzzle to progress to the next stage. Annoyingly, this puzzle element doesn’t get harder or more difficult as you progress, instead you’re just presented with more of the same: a few more flowers to connect, and a few more paths to create that don’t present any challenge at all.

If I recall correctly, there were only three or four distinct landscape styles throughout (including an otherworldly, alternate space/void-styled one that sticks you amid wire-framed bars), but even these seem to defer back to the standard-ish sand and water landscapes in the latter stages of the game. And with maybe 10-12 different stages to navigate, it’s also quite short (3-4 hours for most players, I suspect).

If it sounds like I’m disappointed, you’re right: this is an incredible effort, beautiful to look at, and full of potential, but also fatally flawed. As an experience, it’s well worth persevering with and is probably a weird journey like nothing else you’ve seen before, but as a game it just sucks, and it’s thus difficult to recommend. Replayability is also a bit of a non-starter, although I do believe Gilp Studio are trying to produce some extra content that explains a lot more of the symbology, etc. Alas, I think a basic starting introduction and some more variance is the minimum this needs to raise it above the halfway-decent mark. That said, when I last checked, it didn’t cost much more than a takeaway for one, and on that basis, might be worth considering if you’re curious or otherwise interested in trying this as a form of relaxation or meditation – at the very least it’ll pull you out of the real world for a few hours.

A relaxing journey full of harmony and spiritual ambience, and a mystical adventure. It’s beautiful to look at, and full of potential, but also fatally flawed.