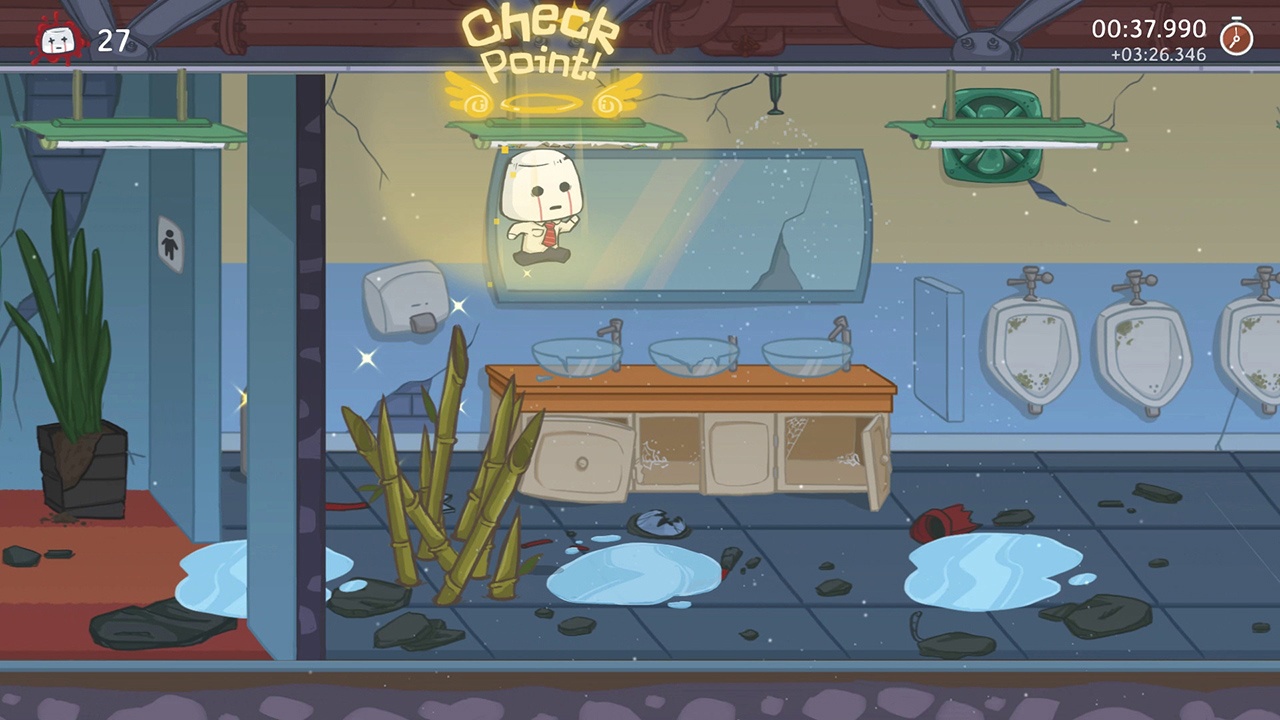 It’s hard to discern if “rage quit” is a term that’s used in any sort of positive way. After all, from what I understand, rage quitting is when you suck at a game so badly that you end your play by hurling the controller and/or inaccurate racial slurs at whomever you’re playing against. But there’s an entire subsect of gaming that is dedicated to making players completely lose their minds in the course of a game. It feels like it started with I Wanna Be the Guy!, but it sort of came long before that in terms of games that were just hard, and has now evolved into games that are downright impossible to play blind. And, joy upon joys, we have one on the Switch now, in the not-so-subtly titled Rage in Peace.

You’re playing as Timmy, who has been…well, not enjoying life, but certainly living it in the most day-to-day fashion possible. But today’s different. The Grim Reaper himself has appeared and declared that it’s Timmy’s day to die, and Timmy is strangely okay with this. His only regret is that he won’t achieve his dream, which is to die, at home, in his pajamas, drama free. The Grim Reaper, being a charitable sort who clearly has not ordered this existential hit, gives Timmy a chance to get home and fulfill his dream, even though he has to have his head cut off (that’s part of the contract, no changing it). However, at that moment the world goes insane, and we have some Final Destination level nonsense happening as everything, EVERYTHING, attempts to kill him. Spikes shoot out of the ground, light fixtures fall, Moai statues roll at him, and that’s just the first few seconds. It quickly becomes apparent that Destiny or whatever wants Timmy to die immediately, and you have to do everything in your power to get home and die the way you always wanted to. 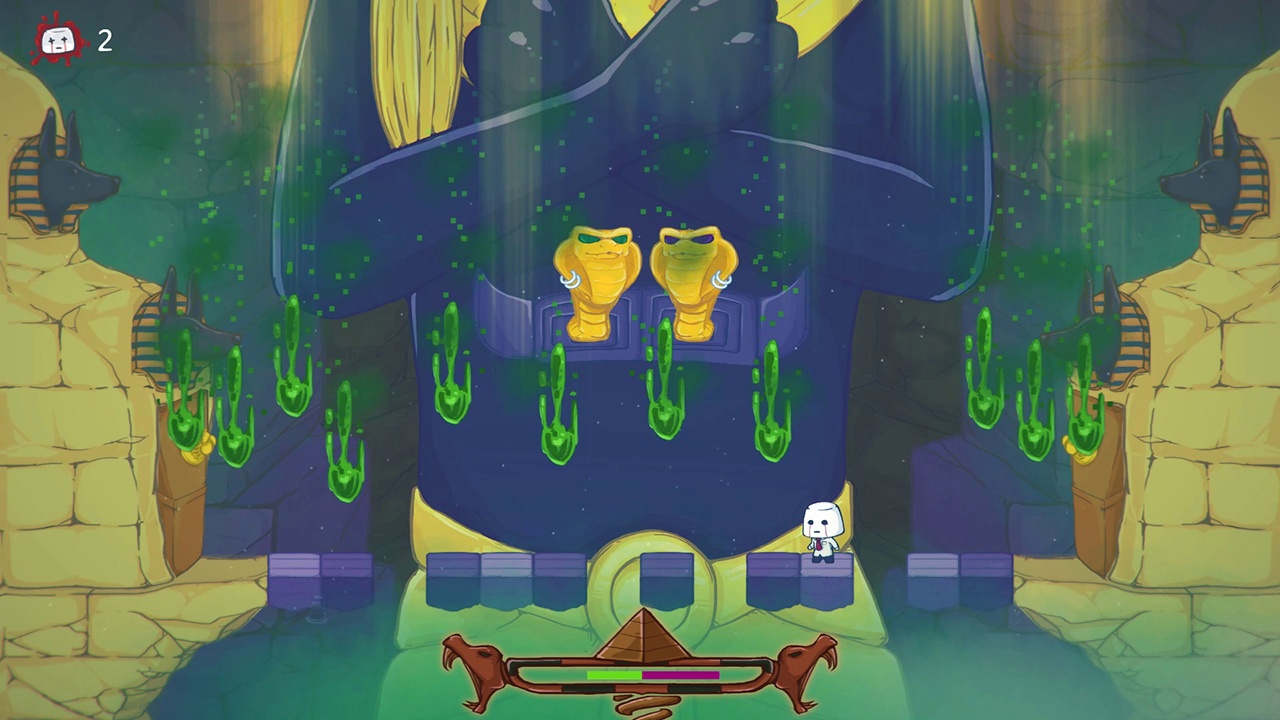 Obviously this is not a game for children, the premise is not to be taken too lightly if you’re sensitive to matters of violence, death and kind of suicide by proxy, but it IS unique. Rage in Peace is, quite literally, a rage quit sidescroller with the sole intention of making the player get incredibly upset at the unfairness of the game. There is literally no consistency on first viewing: you’ll constantly be greeted by new ways to die and contradictions to what you first see. For example, the very first puddle you encounter needs to be jumped over, because it has spikes in it that shoot out at an alarming rate. Other times, you need to walk on puddles because there are spikes on the regular floor. Things fall, shoot, run, scream and generally do everything they can to ruin your life, literally. You often won’t know what will or won’t kill you until you’re already dead. I walked past countless computer monitors without any issues, and then one of them had the girl from The Ring inside.

Hopefully the reader can extrapolate, just from what I’ve already said, Rage in Peace is not for everyone. Before even getting into the really good points, you need to consider what kind of game you enjoy playing. There is no hope here of being able to “get the hang of it” the first time you approach it. Like me, there’ll probably be several times where you need to put down the Switch for fear of absolutely losing your mind and breaking something. I audibly cursed when a sandworm shot into the air, and I waited for several moments before moving forward and then was crushed by returning sandworm. You simply have to accept that the first time you play is a stressful, anxious time wherein everything is going to kill you and will almost certainly succeed. If that doesn’t sound like fun, then you really, honestly should not pick up the game for fear of Switch damage.

However, if you can accept that premise and even look forward to it, Rage in Peace has a lot to offer. Firstly, the worlds and stages are varied, and I love the fact that we try to explain why Timmy needs to go through Egypt, of all places, on his way to get home. As a result, you don’t get bogged down in the same kind of repetitive areas or spaces: you end up exploring a lot of different, equally violent situations. That’s one of my biggest issues with other rage-inducing games is that they tend to be 8 bit, simple, and almost numbing in terms of separating which rooms are which. A grand move from the developers. 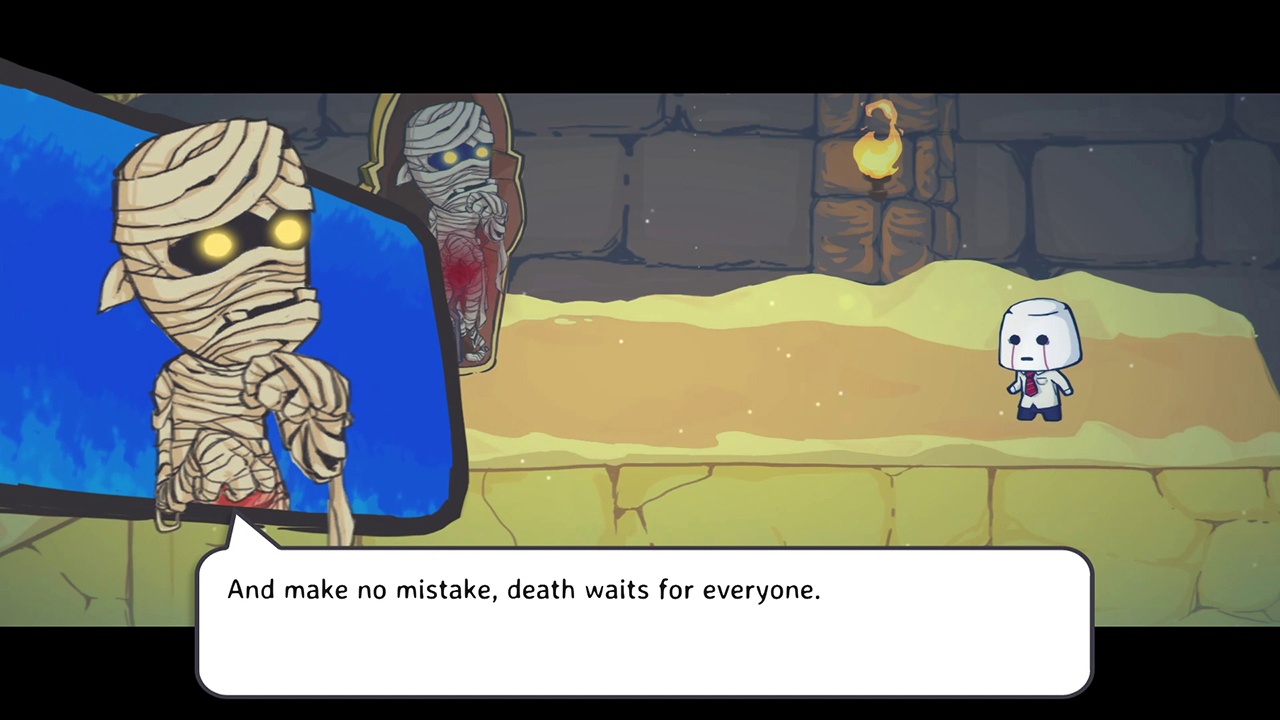 On top of that, the presentation of the game is done in a pretty magnificent way. Rather than just a straightforward quest for death, Timmy spends a lot of time getting sidetracked by NPCs who pop up to interact with him in some way. Sometimes they want to talk, sometimes they want to hurl insults, and, on a few memorable occasions, they want to kill him. I couldn’t imagine how boss fights would exist in a game like this, but Rolling Glory Jam has done a magnificent job of taking a premise and executing it with a good amount of creativity. The graphics are, obviously, a bit bloody, but there’s care in how things have been crafted and presented. Moreover, the soundtrack is glorious, and I mean that without a trace of irony. There’s such a great contribution from the indie scene to make this soundtrack really enthralling throughout the entirety of the run. I was actually surprised how much I enjoy the sounds of something called Melody Monkey, but it’s damn good.

One last note is that the game is, if nothing else, appropriately challenging. There are mementos scattered about the world that you can’t simply suicide grab for collectibles: you actually have to get the item and then stay alive for an appropriate amount of time for it to register. The deaths feel cheap, but they are always in the same place and can, with a little time, be committed to memory. Your brain and your muscles work together to get you out of the building and beyond in one piece. As you get better, you feel more accomplished. You never get to a stage where you get cocky, because you’ll get busted right back down if you put a toe out of line. But you try to hedge your bets where things might be, and you get damn proud if you guess correctly. You will build up quite a body count just trying to go die where you want to. Yet, if you can die, at home, in your pyjamas, without drama, apparently headless, why not go for the gold? Don’t let your dreams just be dreams. Rage in Peace.

I couldn’t imagine how boss fights would exist in a game like this, but Rolling Glory Jam has done a magnificent job of taking a premise and executing it with a good amount of creativity.