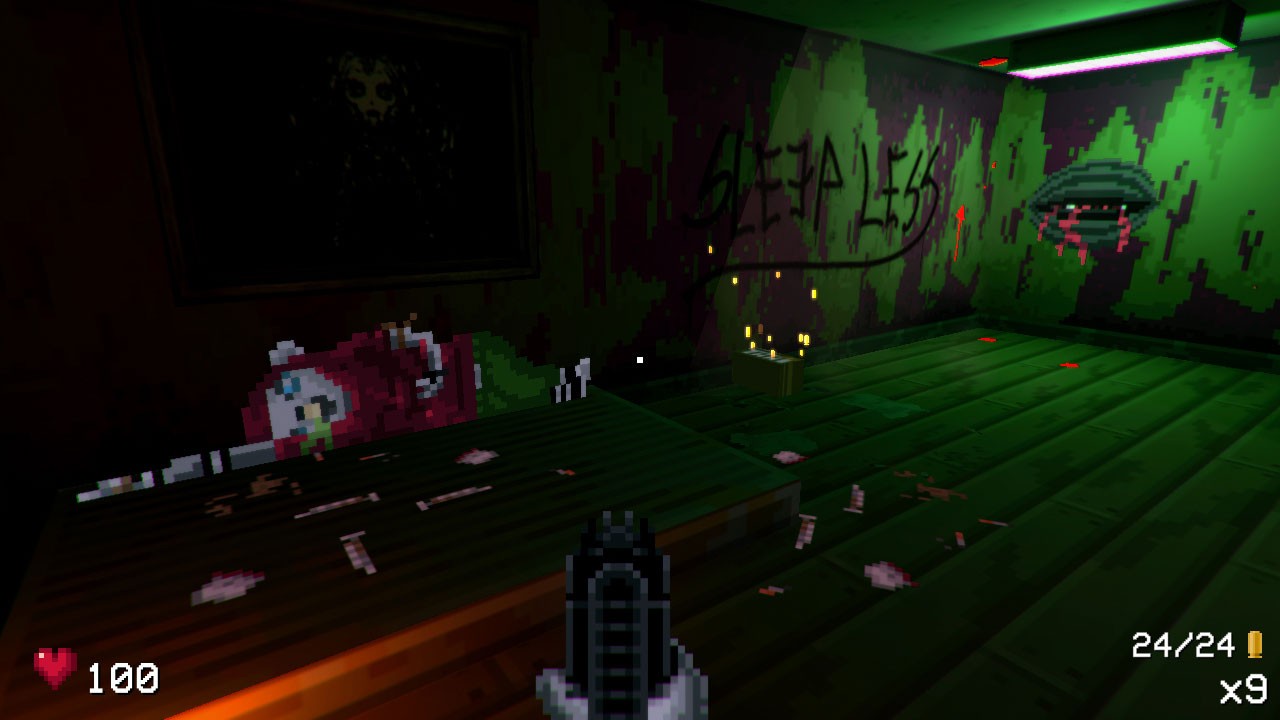 Minecraft meets Doom. Old school Doom. That was the line in my head before even playing This Strange Realm of Mine, on what I would write in the review. While I don’t play Minecraft, I respect the concept, and as for Doom, I was there shortly after Castle Wolfenstein, and I was a fan. I can’t say the same for this game.

It started off well as I got to create a character, and that always adds value to a game, as I often spend hours just on these opening scenes. However, in This Strange Realm of Mine, it’s entirely stripped down and nothing to get excited about; choose a name, colour eyes etc.. Once you’ve created a character, you’re told to forget it – much like Deltarune – as you’ll then proceed to die. It’s painless, but quite a surreal experience.

That’s right, you start off the game dead and try to collate fragments of your memory to remember who you are, meeting a few NPCs along the way, including the bartender at the Tavern Limbo. But let’s have a look at the game before going down that rabbit-hole.

The presentation and playstyle were fine as I knew what to expect, having seen the trailer beforehand. I knew this was indie territory. Controlling your character was simple enough to do, and there weren’t any contradicting commands that would take long to learn or conflict with another button. Then you encounter these upside-down imp things, that look like one of the imps in Doom and a random character in Minecraft got busy. Armed with a torch, I would melee them with two hits as they were hostile, but no matter what, they’d always manage to get a hit in. It was quite frustrating until I unlocked a gun, but it then took two shots still to kill them. 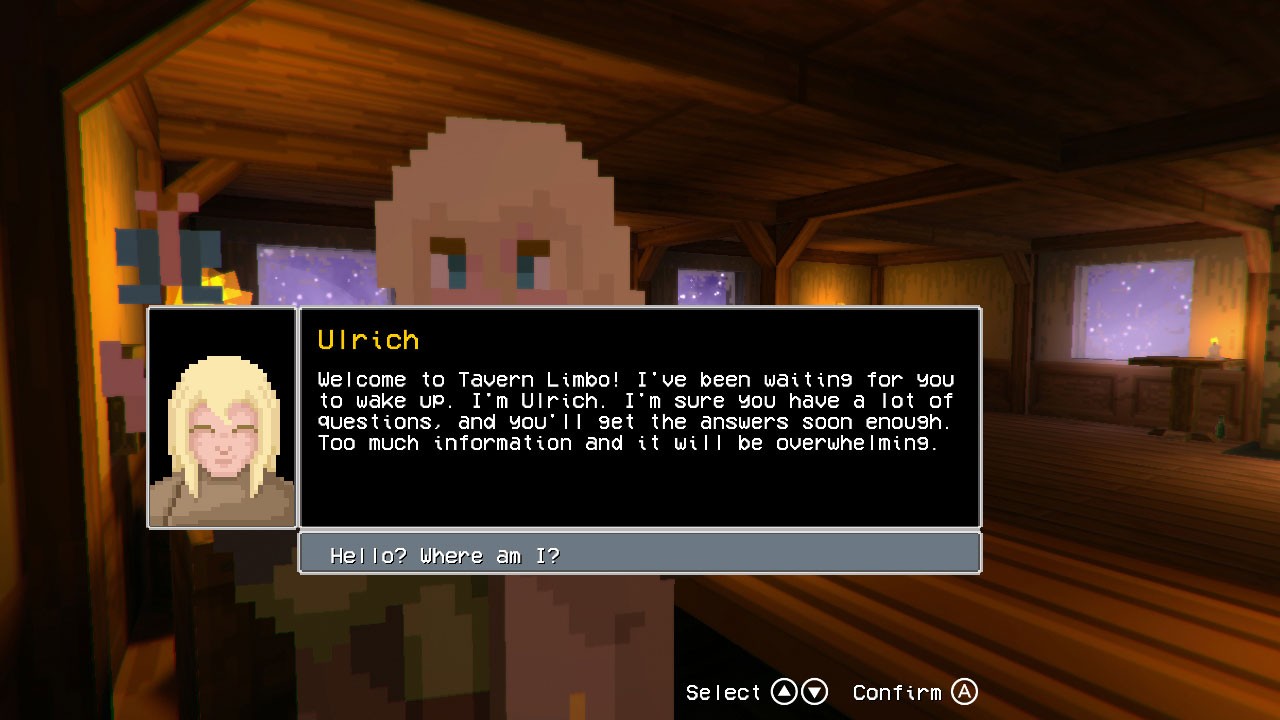 As you make your way around these Bendy and the Ink Machine type environments, with, dare I say, atmospheric lighting and an eerie, unnerving soundtrack, you encounter tile-type puzzles. It isn’t entirely clear at first that there’s a puzzle nearby as, due to the low-res graphics, you can’t make out specific shapes or patterns. What these puzzles rely on is your ability to rotate them on their axis to make a clearer image that, in turn, unlocks a doorway for you to enter. It adds a bit of variety in the game, but as mentioned, it’s a little tricky to see what you’re doing.

Thankfully, this was just one section of the game and one of the least appealing – to me, at least. There aren’t that many levels in This Strange Realm of Mine. Initially, they appear to be very different from the level before it, as you’ll go from a dungeon into space, then into a ranch, shooting goats, and even a 2D platform spin-off. Still, fundamentally, it’s the same process of navigating corridors and walking around aimlessly, shooting anything in your way.

Based on the introduction of the game, I was assuming that being hit all the time would pass, and eventually, I would become stronger or gain a better weapon, but this never changed. The combat in the game isn’t great, and the apparent ‘lesser enemies’ are forever dealing damage. It got to the point where the goal of the game seems to be searching for a medi-kit or more ammo to get revenge on the enemy that just took 25% of your health in several hits. If the enemies in This Strange Realm of Mine replaced stormtroopers, there wouldn’t have been a rebellion. These guys are accurate and heavy hitters. The frequency in that you’re hit doesn’t make it a fun experience. You won’t be losing your mind over it as, it isn’t impossible, but due to the lack of anything else going on in the game, this is a battle you’ll have to endure if you want to reach the end.

The concept of the game is great. There are so many questions it raises about death and the afterlife, and pretty darn deep if you were to judge a book by its cover. Interspersed with these existential segments is a lot of poetry, which is interesting, but there are quite a few moments where the narrative started to feel a little preachy and put me off. When it comes to visuals, This Strange Realm of Mine was a mixed bag as it mixes 2D sprites with 3D environments. It some respects, the graphics come across as very crude, but I like this. Some of the characters, in particular, are quite disturbing and abstract, while others are a little more generic and look straight out of a public domain title. 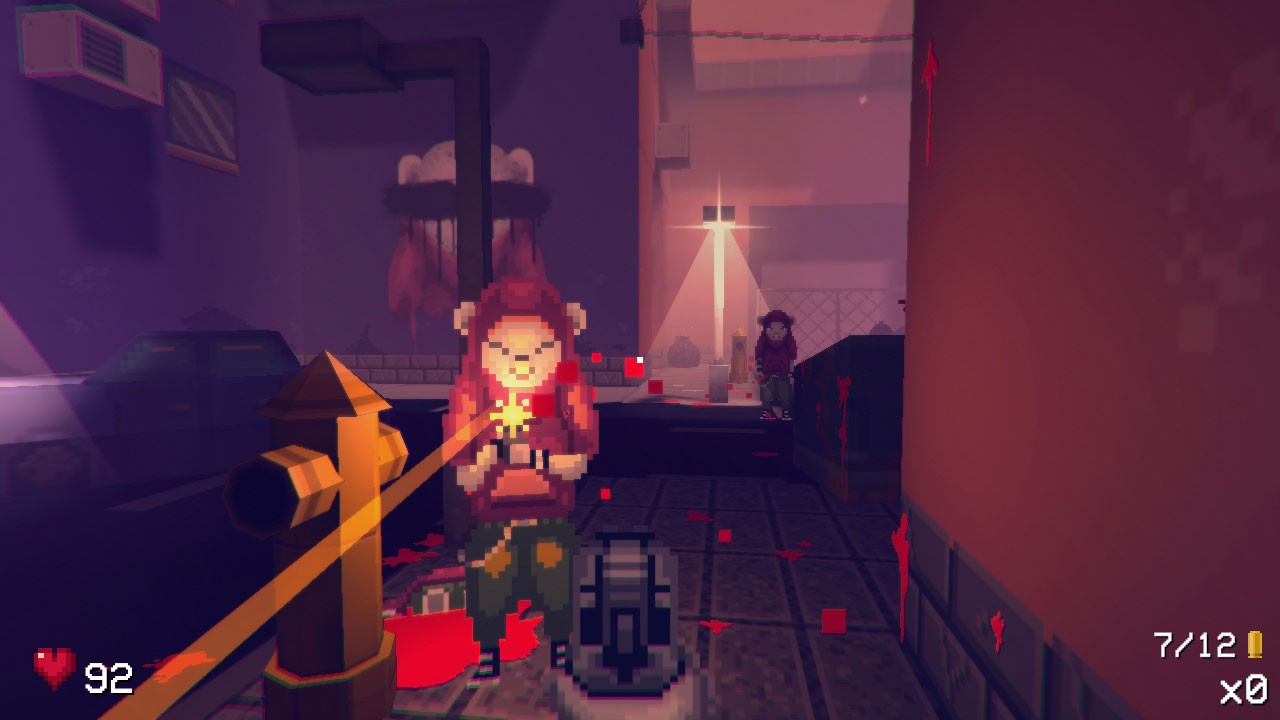 Another focal point between stages is the Tavern Limbo. In these sections, you will share conversations with the bartender and any NPCs you’ve met along the way. Unfortunately, these conversations are set in stone with no dialogue paths. It’s a shame as these areas showed potential and I would have liked to have seen more. This Strange Realm of Mine, while having varying levels cosmetically, does lack a bit in variety. I was looking forward to playing the game, but it just felt uninspiring and metamorphosed into Minecraft without the building or foraging. In some respects then, the game was able to replicate the earlier Doom titles, as there’s a lot of walking around in the game. Too much, in fact.

From the title screen, there is a section for achievements. This is always a welcome addition for Switch users – it’s nice to have the option, even if you don’t unlock everything, but I have to admit, I skipped over it. Based on the awards to unlock, you’re going to need to play through This Strange Realm of Mine a few times to 100% everything, and that’s just not something I’m prepared to do.

There’s something about this game that makes me wonder whether it was ready to be released. It looks like someone has put this together as a first attempt to make a game that shows a lot of promise. If a friend showed me this as a work in progress, I’d be impressed but would give a few pointers here and there on how it could be more playable. While I don’t jump on my orange box with a megaphone, I’m an advocate of indie games but not just for the sake of it and regrettably, as is always the case when it comes to an independent title, I have to say that I didn’t enjoy This Strange Realm of Mine as much as I wanted to.

This Strange Realm of Mine Review

A title that has a wealth of very good ideas that is a bit of a mismatch as a little inconsistent and at times a bit preachy with its themes. No doubt there will be many who like the experience and the questions it raises, but for me, this isn’t an art piece, despite the concept, and it lacked the gameplay to be engaging for multiple playthroughs.