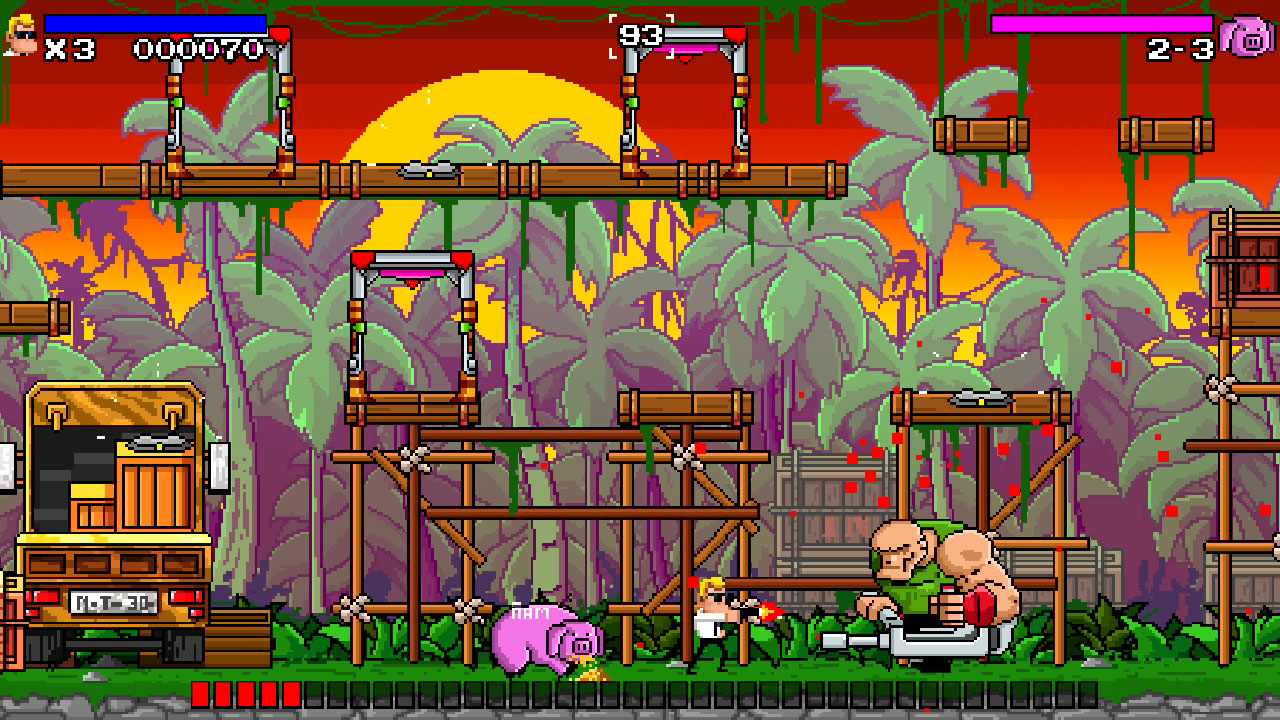 At some point, I’m hoping to let the glossy allure of retro titles, pixel graphics and chiptune soundtracks stop being the siren song to get me to review games. It’s not all bad: quite frequently, I end up playing spiffy titles that have a niche appeal and really do a good job of entertaining me, and it fits in with the mission statement of the Nintendo Switch. Plus, if I keep playing them, that’s probably because the market is successful and people keep making them, right? But sometimes I end up with something that really doesn’t sit great, and I curse myself for leaping before really looking. In this case, it’s a little game called Operation Pig.

The premise for Operation Pig is already a bit bonkers. You’re Agent Wood, a top ranking agent that works for the President of the United States (don’t bother asking what branch or division), and you’re recalled from the field for a special assignment. Now, in an effort to fully impress upon you the ludicrous nature of this plot, Agent Wood was literally about to arrest a boat that was full of plutonium barrels off the coast of South Africa, but it was insisted he return to…take care of a pig. The pig is a gift from the President of Spain, and, apparently, it grows gradually more delicious the longer it’s allowed to roam about, doing whatever the hell it wants. Your job is to keep the pig safe: after all, other governments have heard about the pig and would like nothing more than to kill it and annoy the President (because world leaders are all junior high bullies). Also, the pig can travel anywhere in the world whenever it wants, because this is a video game and that’s what it does. That’s not me rambling excuses: that’s seriously what the scientist in the game tells you. So it’s semi-meta, but not really leaning into it in any complete fashion. Great. Let’s get started.

Operation Pig is a 2D limited platformer with a timer and a mission objective. Each world you visit has five stages, and each stage has approximately four gates through which enemies appear, without exhaustion, to try to kill the pig. You’ve got your average grunts with guns, you get flying drones, you get massive dudes with flamethrowers, the works. The gates generally only take a few bullets to destroy, but you have to time manage and realize that the other gates are still spawning dudes who’ll do damage to the pig. If the pig takes too much damage, it’s game over. If you run out of lives, it’s game over. If you run out of time, it’s game over. Basically, the odds are stacked against you. In theory, you can rebalance things through the power ups that are occasionally dropped and the ability to use a limited amount of bombs as your meter fills up. You can only move onto new worlds once you have enough coins to unlock that gate, and you basically need to unlock all the gates and complete all the worlds so that you make it to Christmas time and slaughter the pig for the First Lady. Good times. 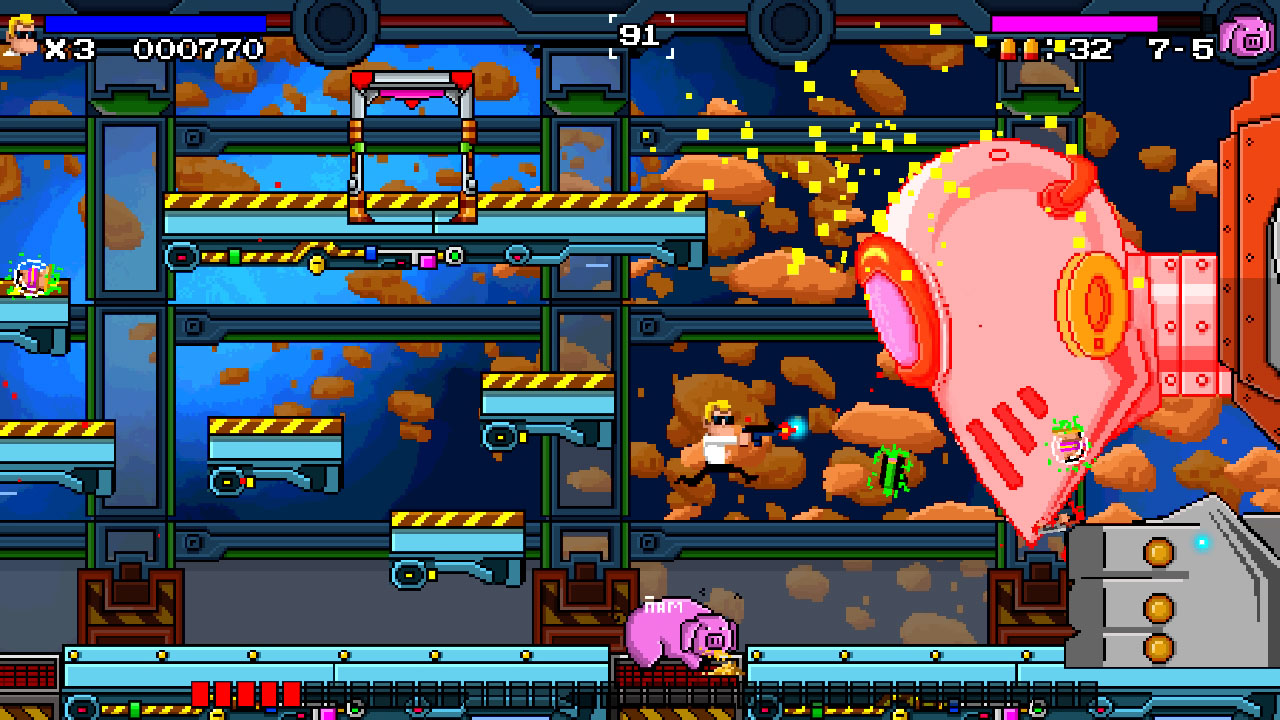 First and foremost, the concept for Operation Pig is novel, and could have been something really worthwhile. I see, through the pixel veneer, a pretty good game plot with some hilarious exposition, some good power ups and a bit of a nudge towards the insanity that is bosses and world leaders. The different items that drop throughout the stages are pretty decent: you’ve got things like shotguns, magnums, speed shoes, freeze cubes and more. When you get the right power ups, you really feel like you got things under control. It seemed like there was also a chance to actually shoot other people’s bullets out of the air, which is completely crazy but also kind of fun at the same time. Additionally, I like that the stages were complex and included hazards beyond just structure and design. However, it didn’t feel fair that the landlines would totally kill me but not even remotely damage the NPCS that walked over them. C’mon, that dude is easily twice my size and he’s got the feather touch or something.

And the graphics and sound aren’t terrible either. Operation Pig has a fairly clean pixel presentation that feels less NES era and more like 386 processor years. When the President or others spoke, they had the same flappy aesthetic to their mouths that you saw in a certain used ship salesman back on Monkey Island. The pig is appropriately robust and hoggish, and doesn’t seem to care for the world whatsoever except to eat whatever’s in front of him. The variety of grunts is strong, and they do have distinct designs so I wouldn’t be surprised when one unleashed a much bigger barrage of attacks than another. And the music, though entirely forgettable, did a bit to put you into the mindset of this style and implied generation of game. You’re here to defend a pig for the President in an age where the President sometimes made comical, absurd requests of his Secret Service. Did Ronald Reagan ever really do these things? It makes you wonder, based on what the 80s seemed to think of Presidents.

However, at that point, the game takes a serious dip downhill. Firstly, the execution of the gameplay simply isn’t my favorite. The range for your bullets is somehow both too much and also not enough. For example, a lot of your shots can go off-screen and hit enemies that aren’t in view, which sounds like it’s helpful, and it sort of is. But it’s also not enough to reach the gates at the far end, which are kind of the most important things to be shooting at. The result is needing to charge into places, guns blazing, in order to carve a path and hopefully get to the gate. Most of the gates, though, are not close enough to be reached by simple manoeuvres, often asking you to move further and further away from the pig in order to get to the gate. Whatever, that’s clearly the point of the game, and it’s hard to get mad at making the design something that you need to actually work at.

But then you realize the AI for the enemies in Operation Pig are sort of broken. Instead of being mostly interested in the pig, several times I noticed the enemies were mostly interested in, well, me. I watched as about three or four enemies kept running back and forth in front of the pig because I was almost in reach but not really and they were most interested in getting to me. The result is the pig standing there, gormlessly, because no one gives a damn about it and suddenly the purpose of the game felt defeated. On top of that, it was a shock to realize that I took contact damage from the enemies as well: it wasn’t enough that they were shooting at me, but I would also get hurt just from running into them. Considering how often you need to use yourself as a human shield in order to protect the pig, you’d think the game would at least throw you a bone in the form of being okay with a little bit of skinship. Nope, dead on my feet because the dude in black rubbed against my shoulder. 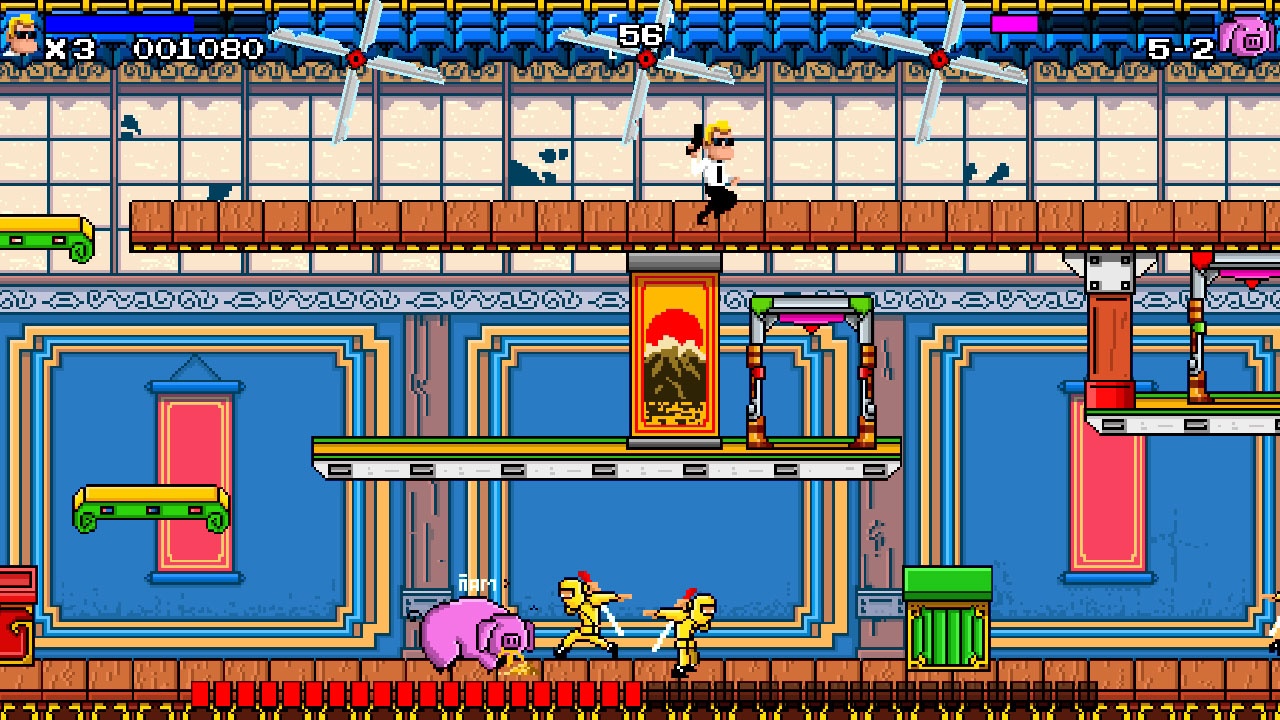 The biggest strike against the game, though, is the forced, strangely designed replay. In order to move onto the next world, you need coins. The coins that enemies drop have a unique approach in that they increase in value the longer they go uncollected, defying your natural instinct in any kind of video game. But the coins also vanish after a certain point, so the uncertainty in it makes for a stressful situation. Then, when you realize the coins don’t unlock anything except for more worlds and basically a “pay-to-progress” model (thank God, not with real money), you get a bit miffed when you see the dramatic jump in prices after the first world. But that is only overshadowed by the fact that the money dropped by enemies never really seems to dramatically increase as you move onto more worlds. I think, if you were able to, leaving the coins alone long enough would make for enough dough to progress naturally, but, since you don’t want to lose the coins, you find yourself forced to replay old levels a lot to grind out a ticket to the next world. The developers try to supplement this by having achievements per level that you can unlock, but the fact remains is that this isn’t even well done.

Take, for example, the very first world. You have three achievements you can do: pig at 100% health, hero with no damage, finish with more than 85 seconds on the clock. Semi-doable. But, should you miss, you can redo the whole stage over again and keep the achievements you make. Okay, cool. And you can always move forward onto the next one. But, let’s say you miss one of the achievements for the second stage. If you don’t redo it then, the next time you want to retry it, you gotta restart and do the first level all over again, regardless. The result is this endless time sink of redoing things over and over again, theoretically getting more coins to make things happen but also wasting precious time doing levels that are technically 100% already. The end result is…well, I hate the pig.

As a side, the English is simply broken on this title as well. I don’t know where Operation Pig’s developers hail from, but there are a ton of spelling and grammatical errors, things are oddly phrased, verb and adjective targets seem to shift…it’s pretty small in the scope of a game where reading isn’t your primary objective. But, as someone who enjoys reading and writing, it sticks out like a sore thumb and annoys the hell out of me.

Operation Pig might be alright as a one-and-done arcade adventure or even some kind of weird Let’s Play series, but I genuinely didn’t find it enjoyable or worth a ton of my time. Please proceed with caution, watch some videos and really debate before diving into this one. My own thoughts? This pig stinks.

Operation Pig could have been delightfully campy, but is instead a boring, repetitive, frustrating slag through broken English and unfair objectives.