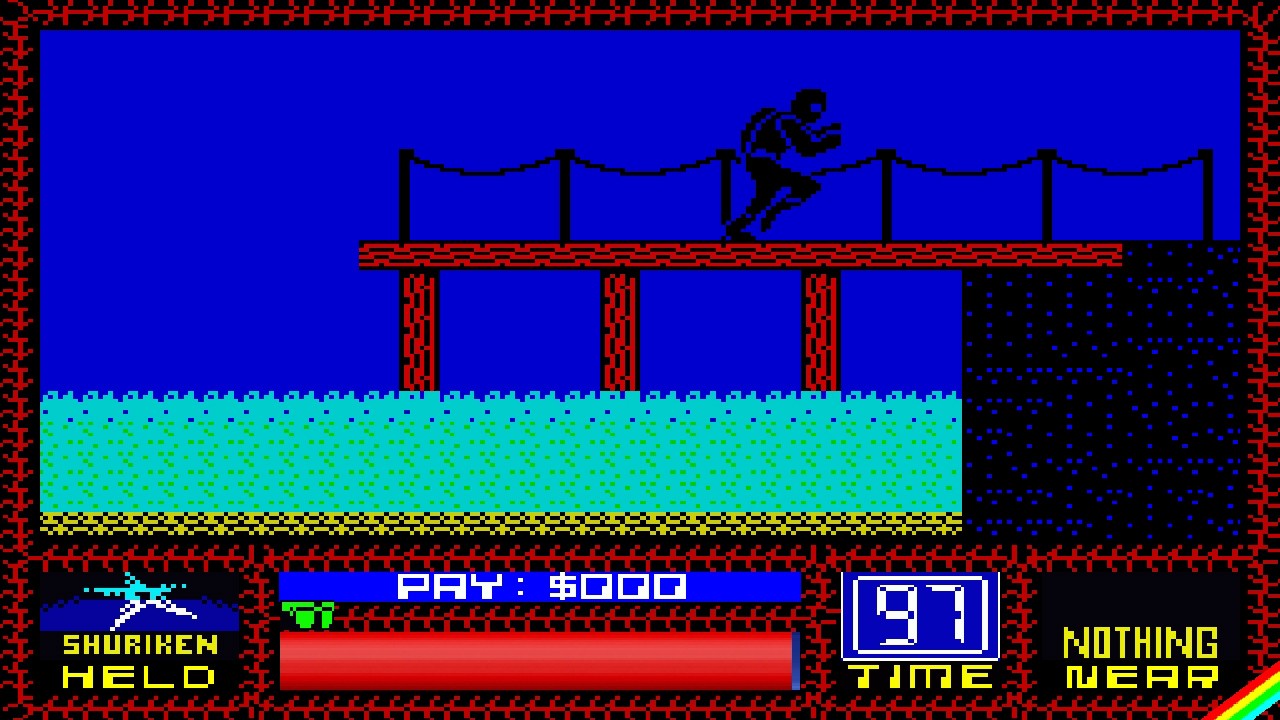 The market is rich and ripe for retro gaming. Folks who grew up playing in the 70s and 80s have, despite their parents’ insistence, not grown out of the habit and picked up a “proper” hobby, like fishing or drinking after work for hours at a bar, alone. More to the point, many gamers who had to flee the scene when the 90s landed and responsibilities stacked up are now finding a lot of extra time to go back and see what they missed, but also to reconnect with what they missed. More specifically, classic games. We’ve seen so many old titles get new life in the current generation, so why shouldn’t the ZX Spectrum get some love? It’s time to go back to a date where pixel graphics were the only game in town, where PCs and consoles were virtually indistinguishable, and where the typeface that a game might use was almost illegible due to spacing. We’re here to visit the world of Clive Townsend’s Saboteur!

The experience of Saboteur! is, as you might imagine, one of espionage and danger. You play the titular saboteur, and you have a series of objectives to accomplish in each and every level. Mostly, you need to get from point A to point B without getting murdered to death by guards, dogs, lasers and such. Find exits, discover secrets and foil (or carry out) plans made by dark forces, as you learn more about the Saboteur and all he stands for. Seriously, you actually get a plotline, this time around, as SimFabric and Clive Townsend have created a more robust world for the Saboteur to live in and to function throughout. Thankfully, you have all the tools you need from the beginning. You can climb. You can kick. And you can throw just about everything you get your hands on in order to make the plan a rousing success. Oh, and you have multiple difficulty levels with which to function, and that just makes it sweeter. 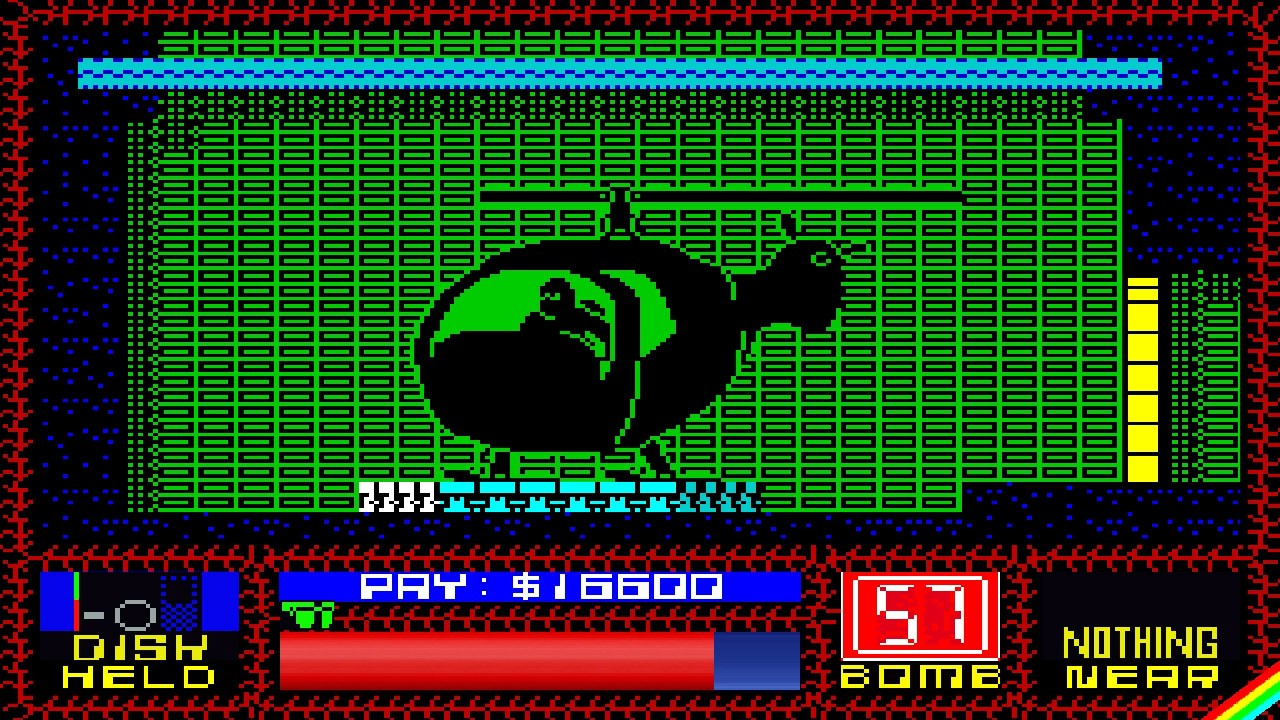 So what is Saboteur!? This is a title that’s effectively a Metrovania for your first time through and a careful exercise in coordinated action and stealth otherwise. You’re dropped onto a map that requires a lot of memorization and coordination, with just a few notes at the beginning as to what you’re supposed to do. The Saboteur will explore the correct pathway down, avoiding or engaging with enemies when necessary and grabbing whatever isn’t nailed down to stay alive. Your health will naturally recharge if you stand still, though this is decreasingly reliable the higher you set the difficulty meter. I strongly suggest first time players set it straight to one at the very beginning because this takes a bit of getting used to. For everything that was added to this game (which we’ll see in a moment), Saboteur! is still very true to the roots whence it came, specifically in handling and controls. Everything is stilted and choppy, and you have no choice but to move in very peculiar ways. The animation is reduced to some pretty set frames and falling can seem to take forever. Plus, you’ll take a fair amount of damage from the fall, so be aware before you decide that jumping is faster than the ladder, because the ladder rarely contains terminal velocity.

From a purely objective standpoint, Saboteur will be a tough sell to new audience members. If you’re not someone who is interested in retro gaming, or has a particular connection to this classic from the 80s, you must take a hard pass. Even though there’s been quite a bit added, it’s all still in the same vein, and that vein takes the teeth and venom of older games and preserves it fresh and crisp. There is a constant timer that ticks down to your instant death. Poor positioning can mean you flail like an idiot while the enemy successfully makes a lot of pot shots and kills you from afar. You can end up getting stuck in redundant moments of repetition, running between similar looking rooms and areas again and again, because there isn’t a 3D map rendering or a helpful robot to tell you what to do next. If you’re not prepared for what gaming was like back before the 16 bit revolution, then this will be a pain, and you should simply walk on by and find something else.

However, if you do like the old school feel, Saboteur is a delight and an impressive piece considering the age and era. The levels, which have arguably been beefed up with extra rooms and areas, are astounding and really intricate to explore and find the paths through. AI behaviour is fixed, but not totally predictable, forcing players to create their own systems of dealing with baddies. Being able to use nearly everything as a weapon, from ninja throwing stars to wrenches and more, makes for a slightly comical effect that carries well. Once you understand the interactions with doors and computers, you see how to trigger and affect different areas within the game, leading to a stronger connection to the Saboteur and his mission. Also, you have time to see some really clever use of robots in the latter stages that remind me of Battle Bots. And that was just fun. In order to really sell the retro life, SimFabrics and Clive Townsend have packed this title to the rafters with as many extras as they can muster. There are a ton of filters for both the sounds and the graphics, moving beyond the simple scanline addition and giving you nine different appearances, including one that most closely resembles the ‘95 remake of the game and, my personal favourite, the NES version (that I don’t believe ever existed). These need to be unlocked, but it’s simple enough once you get the main game down. You can alter the speed of the game engine which should be done with care. It’s very easy to want to amp the game to max speed, but that will make a lot fly by quickly and will be a terrible choice for newcomers. Still, as far as technical additions, it’s a cool thing to have actual gameplay editing and not just “make it pretty.”

You also do have an online Leaderboard regards scores if that’s something you care about, though it wasn’t a big deal for me. Most importantly, there are achievements, which is the lifeblood of any game that dictates replay and, frankly, are the most hilarious things. When you successfully pull off an achievement, the screen seems to explode in a 90s graphic of a Saboteur ninja jump-kicking through a fireball and the words “ACHIEVEMENT” screaming at you. The reason I love it so much is that my first achievement came when I threw a grenade at a guard at close range, resulting in both his death and the achievement activation (which was awesome). Then, checking the achievements, I realized that I had been awarded “Silent Takedown,” for killing an enemy without them noticing. Silent Takedown. For throwing a grenade from three inches away. Totally checks out, thank you Saboteur.

Saboteur is a classic title that deserves adoration by its classic audience. While there are many issues with the original game (some really hard to read text, rooms that lead nowhere, etc.) it’s a true product of what was a successful game back in the day, and it helps to shed light on why a third game has been greenlit for later this year. If you’re interested in an adventure title that is relatively short (about two hours) but is packed full of interesting notions and good design, then you might as well join the dark underbelly and come be a Saboteur.

Though arguably old school and a tad difficult to control, there’s no discounting the amazing gameplay that comes from a nearly 25 year old game.