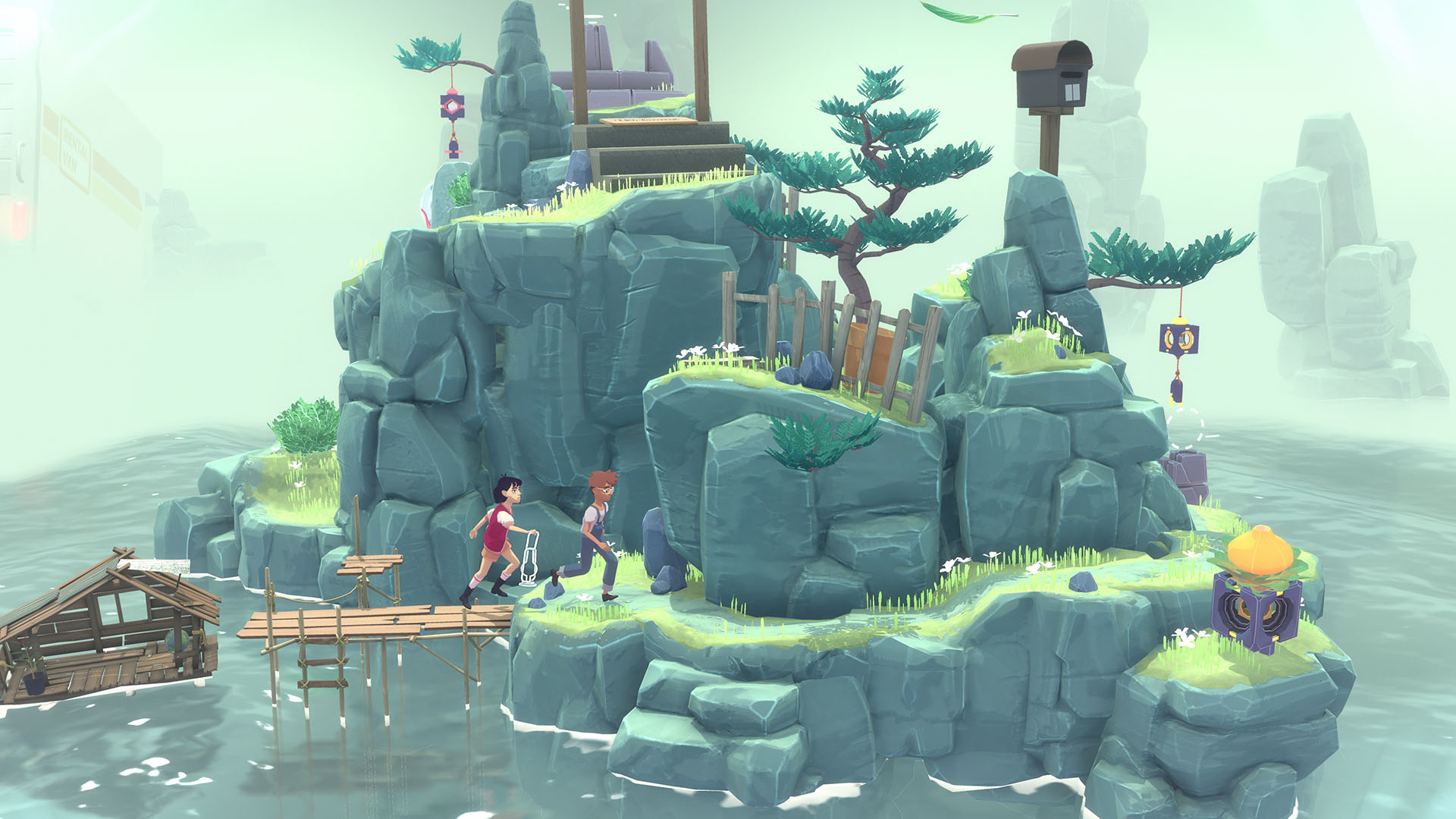 When we look back on our childhood days, there are many elements that may have contributed to making it as wonderous as we remember. There are beautiful summer evenings, endless days exploring, countless new discoveries and sprawling, limitless adventures that are concocted right in our minds. But, for many people, one of the most compelling and important assets to our rose-tinted memories is the one special person who was there to join us wherever our imaginations might take us. Maybe it was a shy little person who wandered into our classroom one day with a matching lunchbox. Maybe it’s a sibling that’s close enough in age to eagerly join us through our fantastical fabrications. Maybe it was even just a very special stuffed animal who had nothing to say, yet was the best conversationalist you ever encountered. In any case, a best friend means the world, be you very young or very old, and their essential role in our personal history is undeniable. This bittersweet truth is the key and the core to Voxel Agent’s newest title, The Gardens Between.

Arina and Frendt are one of those beautiful and lucky best friend pairs who meet one day through Arina moving into the neighborhood. To have a friend that lives next door is an experience that not many get, but is always tinged with unbelievable delight and livelihood. Arina and Frendt have spent many an afternoon playing together all over the neighborhood, but their favorite spot is their conjoined backyard, where games, stories and secrets have been shared. In the course of The Gardens Between, we watch over and join Arina and Frendt as they travel through a dream-like world of memories and moments, unravelling the complex pathways that the brain creates to store these wonderful snapshots of days gone by. More than anything else, this game is a tribute to what they’ve shared together – their discoveries, their joys, their shouldered sadness – and to remind everyone that the most important things are never truly forgotten, no matter what may come.

Voxel Agents (makers of a handful of indie games) specifically joined up with musician Tim Shiel (responsible for the Duet soundtrack) to create The Gardens Between, and the result and effect is something truly memorable in the gaming landscape. Poised as a puzzle game, each “level” is a component of one important memory that Arina and Frendt share together. In order to complete the puzzle, Arina must bring a glowing orb to the other end of the very whimsically created maps, working out various facets and interactions that make the level what it is. The level is locked in time: like a memory, you can play it forwards or backwards, but you can’t change the path the members walk, not necessarily. However, you can slightly manipulate the way that things react and behave. While Arina must carry the lantern, Frendt can sometimes activate specific changes on minor parts of the levels, like moving a platform, or opening and closing some compartments. The game is all about patience: the answer will present itself, in time, it’s just a matter of trial and error.

In terms of gameplay mechanics, The Gardens Between is deceptively simple. When you realize there are only two real buttons – one to start or stop an interaction, and the joystick to move time forward or backwards – you get the impression that this game could be banged out in an afternoon. However, after a very easy couple of memories to get your feet wet, things begin to take a turn for the complex and intricate. Purple plants will steal the light from the lantern unless Frendt can close them ahead of time. Banks of fog can impede your progress, but they can also serve as bridges to cross landless gaps. When you watch something fall, you should take careful note about how the crash unfolds: perhaps, with a little interference, the trajectory may change and either open or close a new route to travel. This is one of those puzzle games that asks you, politely, to sit back and get comfortable, because you will be here a while, but it will be by choice, not by force. You can put down the game at any time, and it will be ready for you when you return. 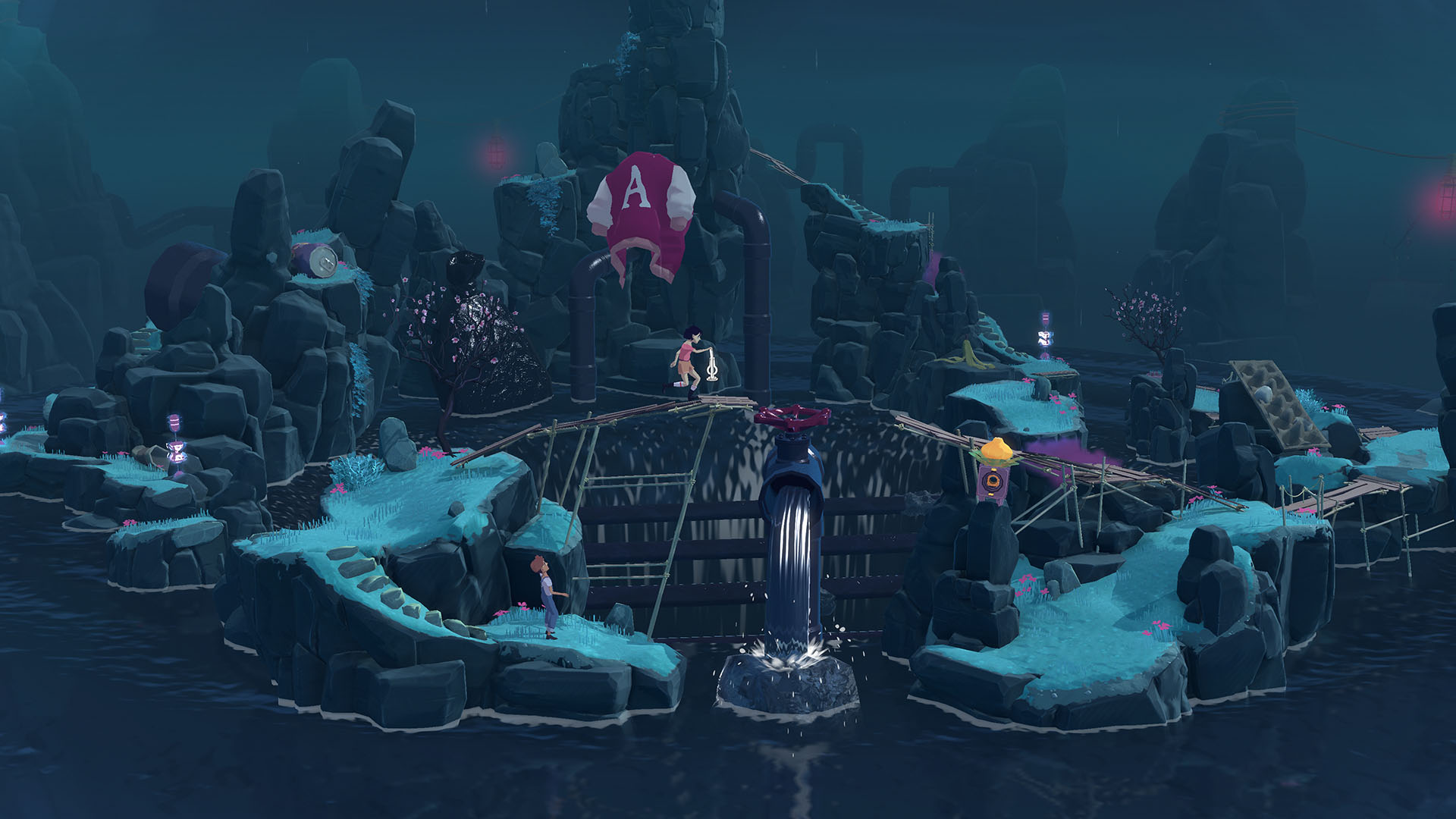 For the most part, the puzzles do have an incredibly satisfying “aha” kind of reaction when you figure out the course and the needed steps. There will be some levels (and this comes solidly under recommendation) where you must walk the whole length of the path before you can properly plan out the where and when that you need to change things. Sometimes it’s immediately obvious: I loved when Arina jumped down on a giant saw handle and it moved a little, so I rewound and moved forward multiple times until it sawed through a plank, creating a pathway for Frendt. Sometime it’s more arduous: not one level later I had to walk all the way to the finish line and then play it backwards to see where a jumping cube had started from so I could give it my lantern. The speed of moving forwards and backwards may, at times, feel far too slow, and you’ll wish you could mash the button harder and get the pair to move faster. But that’s the thing about memory, it moves exactly as fast as it needs to; and that level and style of mentality lends itself to the rest of the game, where we take a shift from simply entertainment and elevate it to art.

Visually, The Gardens Between is stunning. Each level is represented as a small, cluttered island that’s built out of important artifacts from Arina and Frendt’s memorial past. You feel like you’re a bit lost somewhere in their minds, but not in a way to raise a panic; after all, these are their memories, and each is tinged with a distinct level of fondness and nostalgia. The gigantic proportions of some items – bowls of popcorn, tire swings, even cassette tapes – is in correlation to how important and how intricate each item was to the memory in question. You get a feeling for their relationship through the visuals, and understand why they were so important to each other. As much as Arina and Frendt had in common, there were smaller factors at work that made them different people, which also made them interesting to each other. You can’t just hang out all day with your reflection, you’ll go mad with boredom.

Beyond the arenas are the characters themselves. Though you can’t directly control the lanes that the two walk, there’s been painstaking care put into making each of them move forward with their own sense of purpose and ideals. You can see that Arina is often the leader of the pair, not necessarily fearless but a bit more bold in terms of setting off, confident that the way she’s headed is the right direction, or at least will be. Frendt is a bit more hesitant when he’s unfamiliar with something, but springs to life when he recognizes and understands what he must do: the video game encounter in particular stands out. And then there are moments where the two seem to swap places. Where Arina seems to have doubts or concerns about something, and will pause, lost in thought or worry. At this point, Frendt will overtake the leadership role without question, choosing to be the strength his friend needs to get through the memory and move onto the next leg of the journey. All these small ticks that we see in the characters set the stage as the memories progress and we head towards the inevitable conclusion. 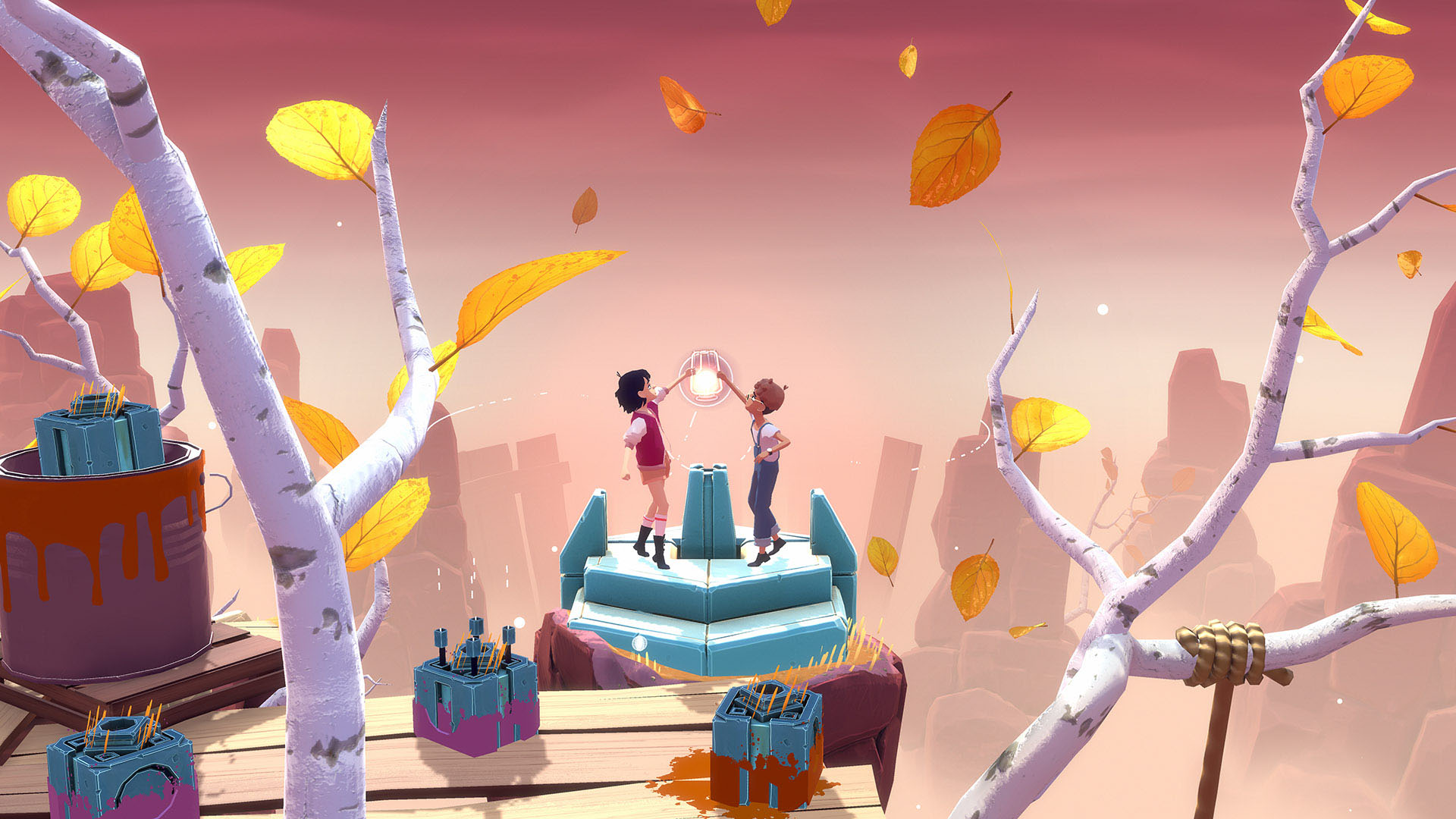 The soundtrack, the melancholy, ambient soundtrack, is a huge part of The Gardens Between, and Tim Shiel has gone above and beyond to craft something that allows you to sail the islands of memories with these two friends. Much like Old Man’s Journey or Last Day of June, it’s impossible not to become involved in the deeper recollections of someone and not brace yourself for something terrible or sad to arrive at the end. Mr. Shiel carefully sculpts the soundscape to let the player forget, for a moment, that there is something waiting for us at the end of the game, even if it’s just the end. Instead, we are captured and focused on helping to untangle the mess of memories so that we can better see and understand what the friendship of Arina and Frendt is like, caught in a perfect Polaroid of their happiest times. The music is far from falsely cheery or upbeat, but merely light and somber. The music is like that last laugh that you make when you and a friend or loved one are chuckling over a reminiscence of the last time you all went out to the forest together. In a flash, you’re back there, and it’s fun and free and chaotic and wonderful. But as the laughter dies down, you have that one last note of mirth that’s tinged with a sigh. That was the time, and this is now, and you’ll always have your memories, but that’s all they are. The music of The Gardens Between keeps you in that final laugh for just a moment longer.

It goes without saying that this game may not be for everyone. Many people balk at a puzzle game with such simple controls and a nonverbal story, and they’re more than welcome to do that. But The Gardens Between does a phenomenal job of drawing you in with beautiful graphics and immediately hooks into you with the first patter of rain before the menu even pops up. You don’t need to rush it: you can take the time you need to find out all of Arina and Frendt’s story. But you’ll find it all out, trust me. If you can find the time for an evocative title that captures the illusions of grandeur we all once had, then you’ll be delighted by The Gardens Between. After all, somewhere out there, a shadow of us all plays in the idyllic sunshine of years gone by, and our friend is still there, and their joy is eternal.

The Gardens Between Review

Sometimes we just want to hold onto the good memories for a moment longer.