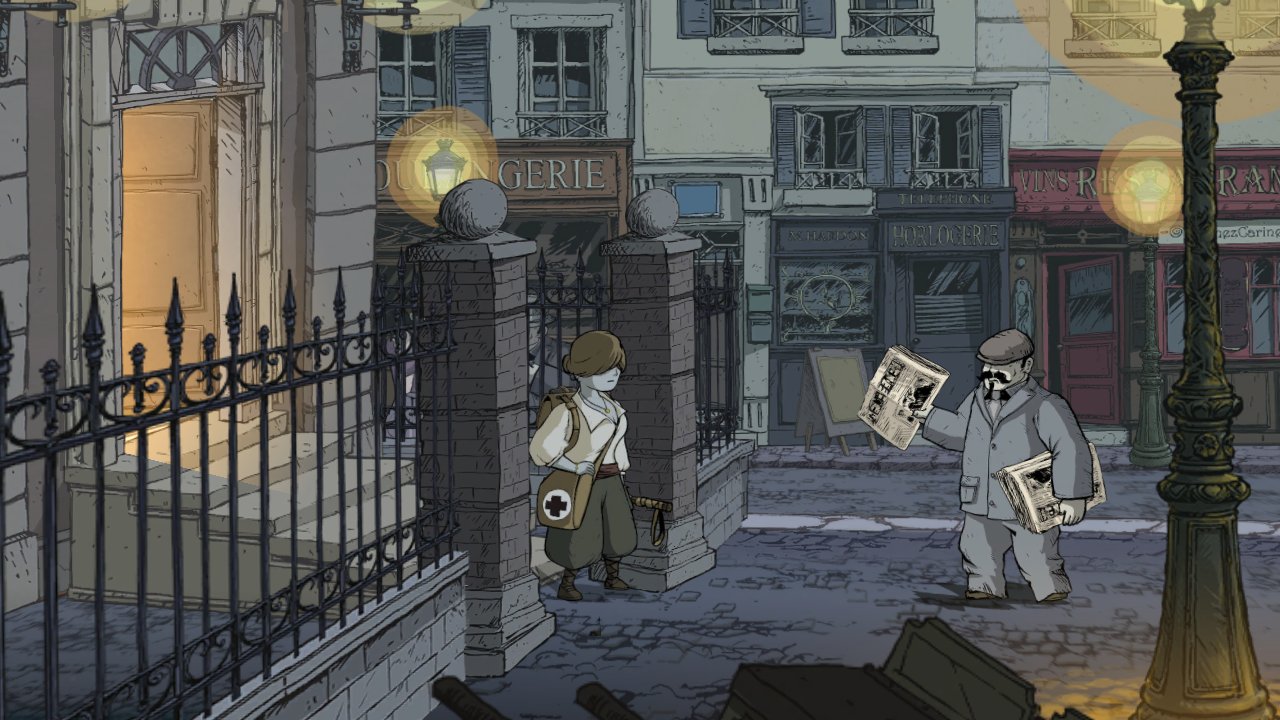 It seems quite poignant that Ubisoft have decided to release Valiant Hearts: The Great War on the Nintendo Switch, around the same time that the world is commemorating one hundred years since the end of the first world war. It’s almost befitting, not because this is a game that contains themes based on the war, but because of the underlying messages that this game conveys so well. It acts as a contrast against other war-style games, instead opting to highlight the effects of such disastrous actions and the inhumane nature of war. However, what the game does really well, is present all of this in an interesting and exciting way, yet one that contains such charm that you simply fall in love with it.

Primarily a 2D side-scrolling platformer, this is a title that incorporates other elements into its gameplay to help keep things moving along in an investment of storytelling. Animated cut-scenes push the story along, whilst a series of light puzzles hold just enough to keep things interesting without ever becoming frustrating. The story follows the exploits of several characters, beginning with a French farmer who is enlisted into the fight, an American who he meets along the way and a Belgian medic caught on up on the battlefields of Europe; there’s also some viewpoints from the German side of the conflict too, offering a variety of perspectives into the innocence of people caught up in the conflict.

The game itself contains a very basic mechanic in terms of how it plays and the complexity of its challenges. However, this is by no means a bad thing, as it creates an instantly accessible title that any age can play, plus also makes the whole journey a really enjoyable romp. There’s no need to grind or backtrack to push the story forward. Everything just flows at a perfect pace that allows you to take in the story and its underlying messages, as well as just enjoy the gameplay as a whole. There’s a nice level of interactivity here too. This isn’t a simple run and jump style of platformer, but one that involves creating distractions, stealth elements and creating new paths to overcome any obstacles that may stand in your way. 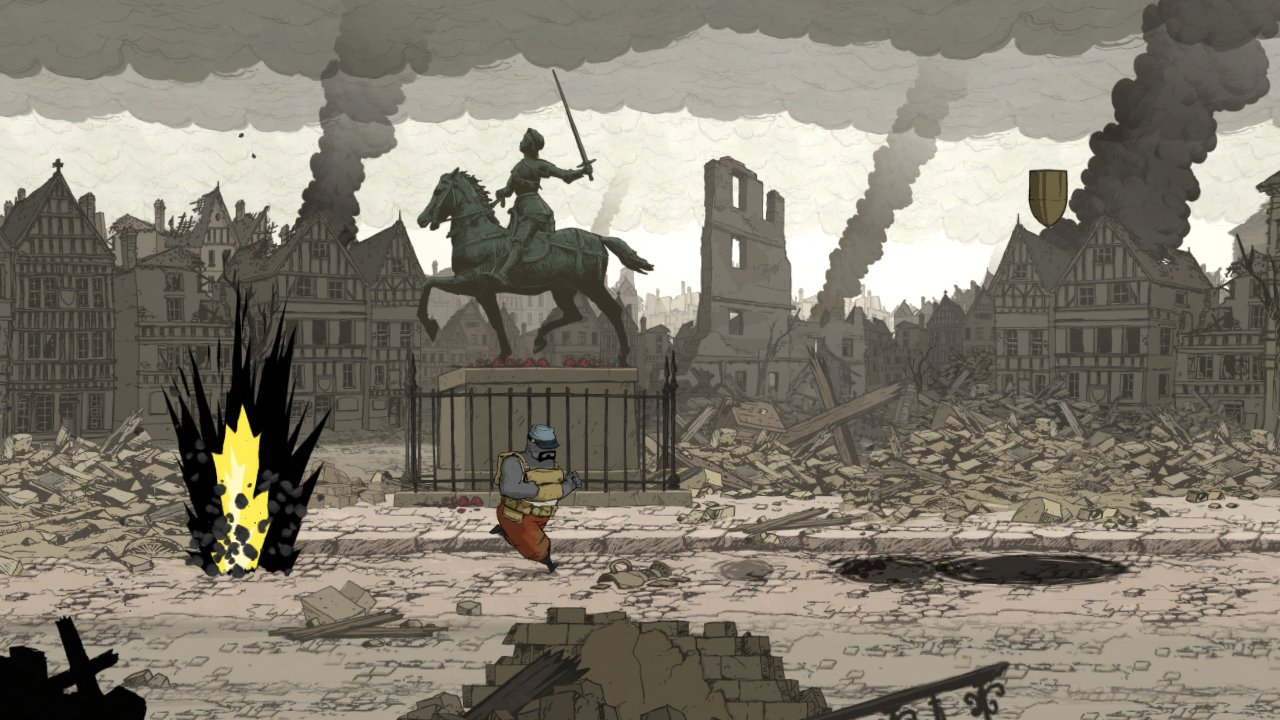 In order to progress the story, you need to interact within the environment; releasing and climbing or descending ladders, taking out sentries, throwing projectiles and even utilising dogs to succeed. Despite its elements of puzzling, or challenges that need to be overcome to proceed, there’s nothing here that is too taxing. In fact, the balance in its difficulty levels have been superbly implemented, providing a source that actually draws you into its world and despite the horrors of war going on around you, is a completely mesmerising and enjoyable experience. Control schemes have also been superbly implemented into the game, utilising both conventional and touchscreen capabilities; both of which provide equal experiences and feel very natural and responsive in their execution.

What this game does best though, is to educate the player on the events on the great war. The events of the game are historically accurate and through a series of collectibles, factual information and real-life photographs are issued to bring home the true subject matter of which the game revolves around. Ubisoft Montpellier have really outdone themselves in how they have portrayed the lessons that need to be learned from such a devastating war. It may be cartoonish in its appearance and enjoyable to play through, but underneath there’s a serious message here, one that we can all learn from. 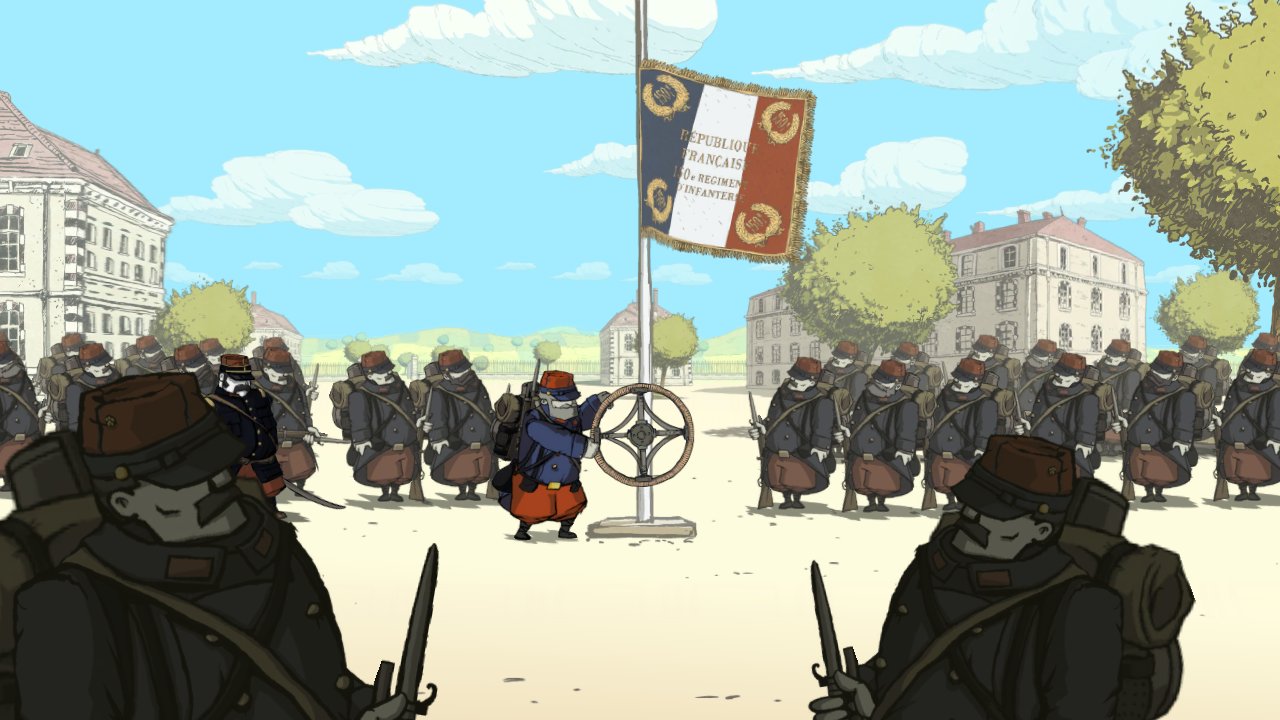 Saying that though, the true horrors of war have been softened somewhat by the overall presentation of the game. This isn’t necessarily a bad thing though, as this creates a game that accessible to all ages, which in itself is a good thing and it helps to educate future generations in a fun and interesting way. Its overall style matches the quality of a children’s television programme, along with grunted sound effects and a narrator to help explain the story. However, there’s also a certain charm that ebbs from this style of presentation, one that makes it a superbly entertaining package for adults too.

Despite the horrors of war, everything here is presented in a beautiful fashion; one that gleams from the polish of love that has been put into this game. It never becomes a slog and holds enough interest to keep boredom at bay. There’s simply so much charm and affection here, that it forces you continue playing. Not bad for a game that is now approaching five years old. However, here on the Switch, this feels like an infinitely different game from previous versions. Its uniqueness feels perfectly at home on the Switch; in fact, I’d even go as far as saying that this game has found its perfect home as despite playing it other consoles, it’s never felt as engrossing or entertaining as it does here.

Overall, Valiant Hearts: The Great War is a wonderful addition to the Switch’s ever-growing library of game. It’s fun, it’s informative, it’s utterly compelling and fun to play through. All of its mechanics hold a fine balance in all of their executions, from control schemes to difficulty, everything is easily accessible, making it an ideal game for any age. As well as the main game, of which there is enough content here to entertain for hours, this edition of the game also comes bundled with the Dogs of War interactive comic book and an artwork of the game gallery. It’s not much, but it’s still worth a look. However, it’s within the main game where the real beauty of this title lies and on the Switch, it’s underlying message has never been clearer.

Valiant Hearts: The Great War is a wonderful addition to the Switch’s ever-growing library of game. It’s fun, it’s informative, it’s utterly compelling and fun to play through.