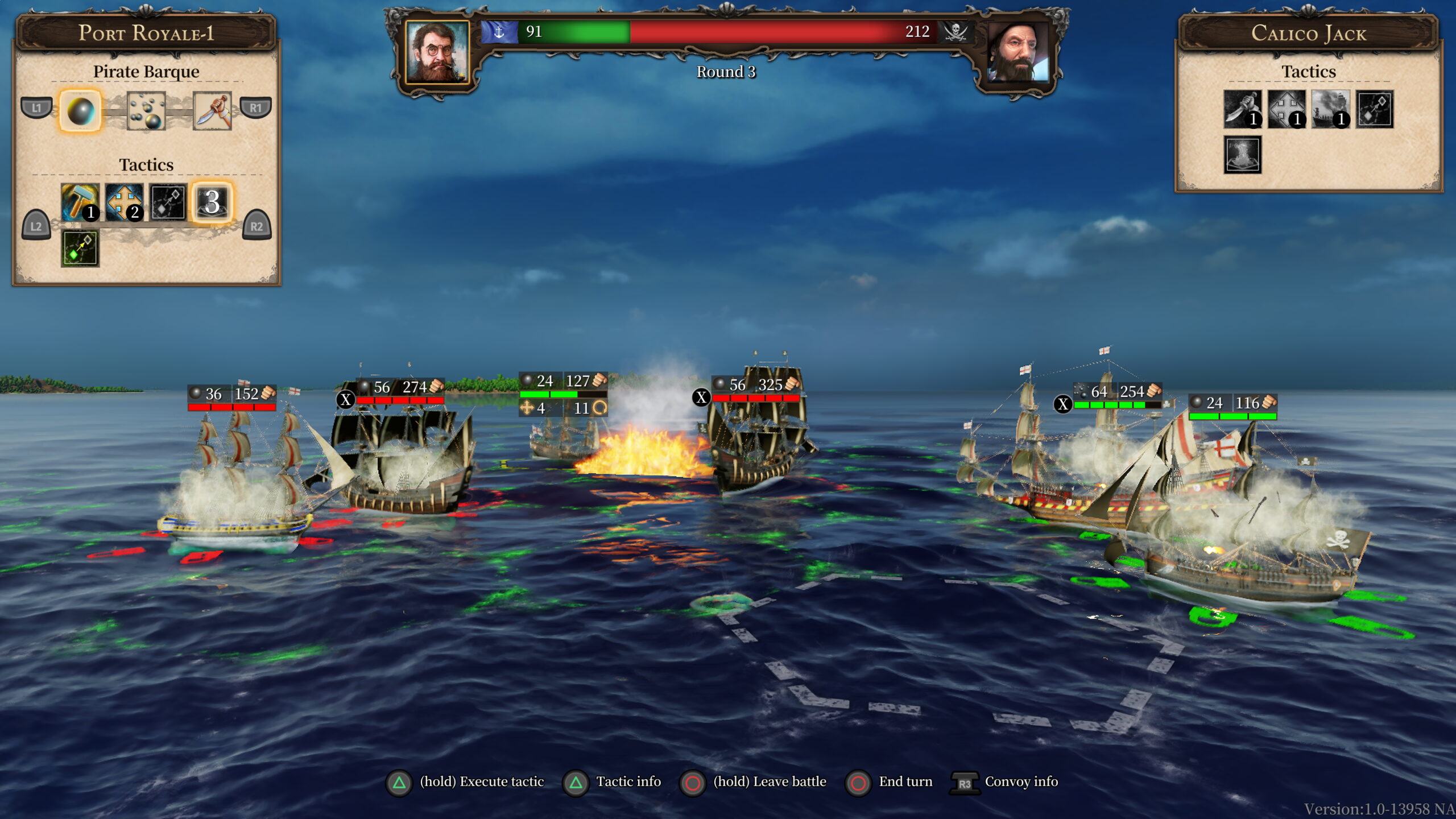 There are several genres of games I loved as a child, and one of them was strategy resource management. This love has gone from strength to strength, and as a mainly console player, I feel that my gaming choices are somewhat limited. Most developers focus on fast-paced and high-intensity titles, allowing the PC market to be spoilt with new weird and wonderful creations. Luckily for me Kalypso Media have published the latest addition of a much loved franchise Port Royale. Port Royale 4 has been developed by Gaming Mind Studios, and it carries on in the same vein as the others in the series. Set in the Caribbean in the late 16th to 17th century, you take control of your own ship, and command other captains to fulfil your bidding. You are given free reign of how you wish your life to unfold, and you choose whether you want to be loyal to one man, or no-one. Will you be an honest, hard working merchant, buccaneer, explorer, or a pirate? The choice is entirely yours, but whatever path you take, you must live with the consequences, even if that means losing your life.

Port Royale 4 is a real-time strategy, and heavy resource management title that takes a lot of getting used to. I have played every title in the series, and delved into others such as Patrician, and even I was taken back by the complexity and level of detail. If you think you are going to pick this up, and jump straight into being a world famous merchant, or notorious pirate, then think again. The game has a lengthy tutorial for a reason, and if you fail to take part, then you will not succeed at this title. This guide helps you to move through the basics, all the way through to production and naval battles. You are also provided with a handy hints and tips section if you ever get lost, or just need a helping hand.

For gamers who have had the pleasure of playing any of these games, this portion of the review will be a bit like teaching you to suck eggs, so I apoligise while I cover off the fundamentals. So what’s Port Royale all about? You are a free man, you choose how you wish to live your life, and which of the 4 nations you want to fly your flag for; England, Spain, France or Holland. You aim to become famous throughout the Caribbean, be it for the right, or the wrong reasons. You will be asked to; support towns, trade commodities, complete tasks, fight for your nation, take down pirate vessels, and fulfil missions for the country’s Viceroy. You are free to do this however you wish, and you can call anywhere home. Your help can make a nation thrive, or you can block all resources, and make any town a miserable place to live. Do you have the most powerful fleet on all the high seas and wish to take down that Spanish convoy of heavily guarded treasure ships? The reward may be high, but the risks are always higher. You will soon fly the familiar Skull and Crossbones flag, where evading any military presence will be your new focus. 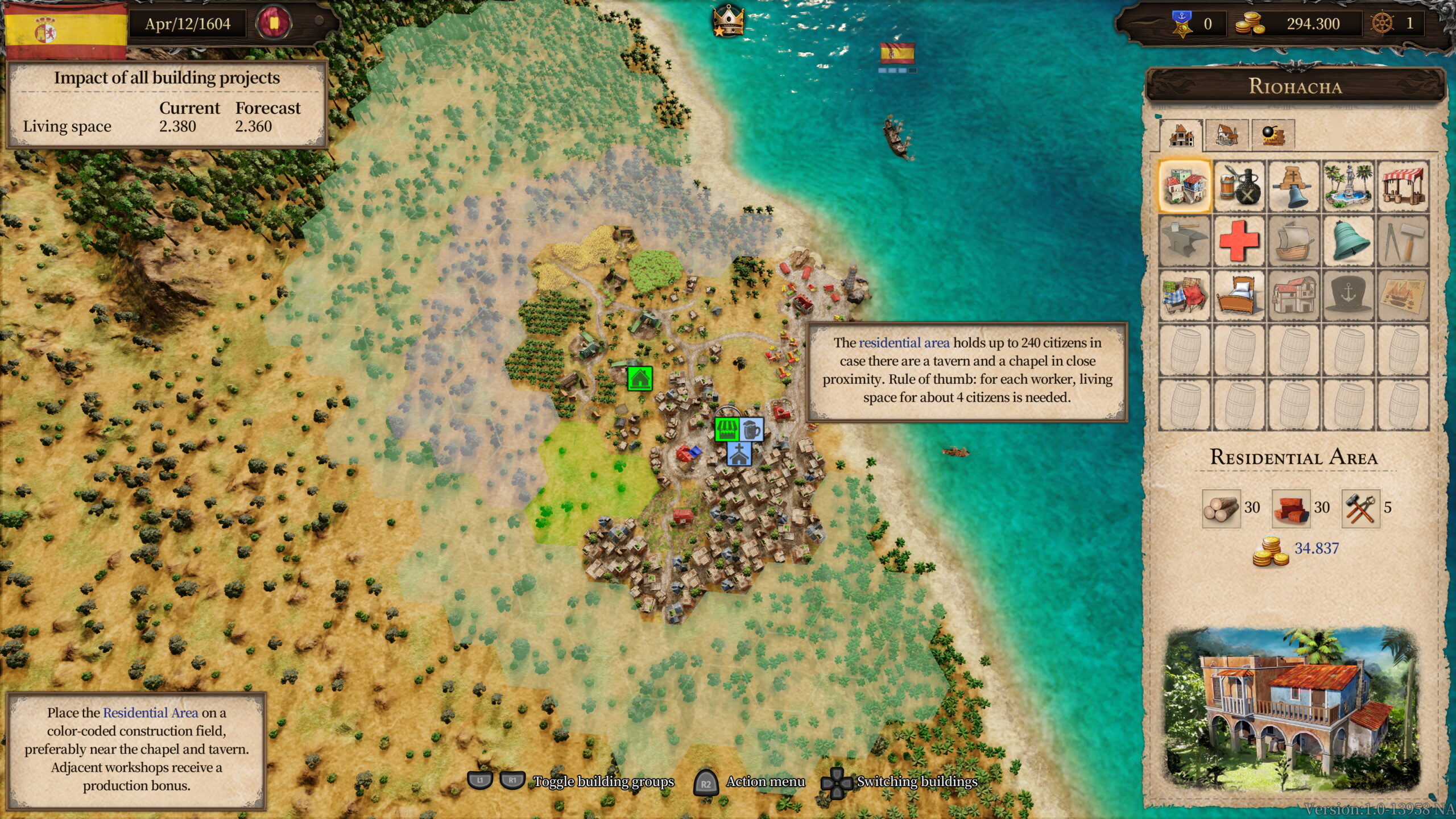 The joy of this series is that you are free to be as bland and mundane as you wish, or you can go all out, and try to control everything. For all its complexities, the game breaks down into these easy to follow categories; trading and production, missions, and fighting. Though they are separate mechanics to understand, they rarely work alone, and you’ll find that all three usually blend together seamlessly. This creates a fascinating and fluid gaming experience, and once you understand how the game ticks, you end up losing hours of your life to its many twists and turns.

The most time-consuming element is definitely the trading and production. This is where the resource management element shines through, and the world is constantly shifting because of the supply and demand culture. Like in real life, money makes the world of Port Royale go around. Sell low and buy high, create your own farms, grow your own produce, and capitalise on controlling your own supply chain. Those who have the money generally have all the power, and hold all the cards, so understanding how this element works is key to success.

Missions help to give you some much needed focus, it’s easy to lose yourself in this open world, so sometimes it’s nice to be given a task that not only demands results but also gives you an injection of fame and money. The tasks vary from simple delivery missions, to eliminating pirates, and destroying other nations’ ships. Success will reward you with an increase in reputation with the respected country, and its Viceroy. Failure does the polar opposite, so only take on missions that you believe that you can complete.

My favourite premise was the naval battles. Destroy anything and anyone you want, but if you do not have the relevant documentation, the consequences can be dire. The strategy elements of the fights were a real improvement from previous iterations. Before, you would have the freedom to select ships and float around the screen, blasting away at each other until one of you sunk. Now, you take it in turns to move and shoot, kind of like an oceanic game of chess. This change made the fights slower, and more in-depth. No longer was it just a game of chance, and the winner usually is the person who plans their attacks more thoroughly.

This was the only noticeable gameplay difference between number 3 and 4. You may think, “Well, what’s the point in purchasing a new game, if there’s little change?” It’s a fair point, and I would agree if like the Call of Duty franchise a new game came out every 12 months, then it wouldn’t be worth it. But Port Royale hasn’t been seen on a console since the Xbox 360 so this latest edition was always going to be welcomed with open arms.

The action plays out in mainly a bird’s-eye view. You are given the freedom to zoom in and out and rotate the screen. You can also inspect any towns or cities that you come across. Battles use a 3D view, with a hexagon map to show the limitations of movement. There is a clear improvement on the graphics, though it has maintained its simple art style, and bright use of colour and tone. It would be fair to state that the graphics haven’t quite made it up to the latest console standard, but with this genre of game, it doesn’t matter. The character models for dialogue and cinematic are a little dated, but for me, this just added to the charm. The view of the world is clean and crisp, and easy to follow. This can’t be said for the many submenus that you will be forced to use to make the most of all the game elements. I said at the beginning this game has a lot to it, and until you get used to these additional options, it’s all very confusing, and a daunting experience. Stick with it though, as the effort is well rewarded, and you get to grips with it pretty quickly. 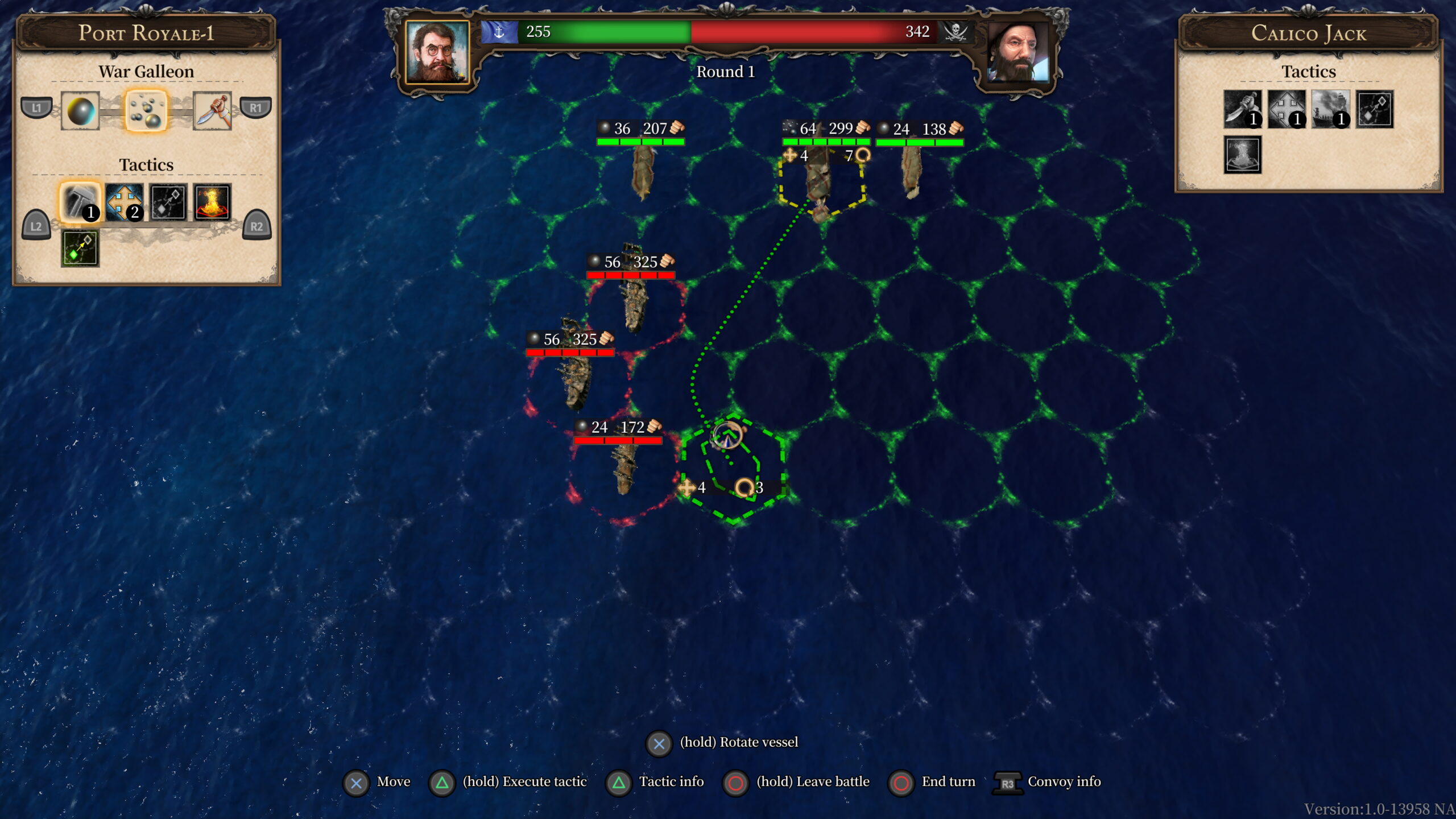 The audio is a fine example of pirate shenanigans. The roar of “aarghhhhhh” fills the air at every opportunity. The waves crashing against your ships, the boom of the cannons, and the crack of the wood as ships get obliterated in battle, it’s a fantastic spectacle, and suits the theme perfectly. Each character you speak to fills their role brilliantly, and you are transported to the world you are exploring. It would have been very easy for the developers to push the sound into the cliché bracket, but fortunately they have reeled it back enough to keep it lighthearted and enjoyable.

One issue that I had revolved around the control setup. Not the mapping, as the use of buttons is very well explained, and accessing the many radial menus is straightforward. My issue lay with the sensitivity of the analogue sticks. The cursors moved around the screen quicker than Usain Bolt going for 100m gold. I tried 3 different controllers, and the issue remained. It impacts how it plays and makes it a little tiresome. You get used to it, but I can’t help but think it would be better suited to the keyboard and mouse.

In a game that is a completely open world, where you have full control of the sandbox, you find that not only do you get a lot of challenges, but you also get a heck of a lot of replay value. You are given the ability to play both a story based campaign and free mode, both use exactly the same game mechanics, but one gives you more structure and focus. Every single game that you play differs, where each of your actions has consequences, and this alters the path that your game takes. No playthrough is ever the same, and this gives Port Royale 4 a massive replay value. A rather intense and large achievement list can be tackled alongside the main game is you want an additional focus, and challenge.

This is a franchise that has spanned many years, and many platforms. Every time it appears, it’s well received. This addition is no exception. I have waited a whole console generation to get my hands on a copy, and I haven’t been left disappointed. Do I recommend it? Of course I do! It’s a time consuming animal that will take over your life. Detailed planning and balls of steel are required to succeed. Grab a ship, choose a flag, and be the captain of your own destiny.

A detailed and tough resource management simulation that takes time to master. Choose your nation and decide what type of captain you’ll be.