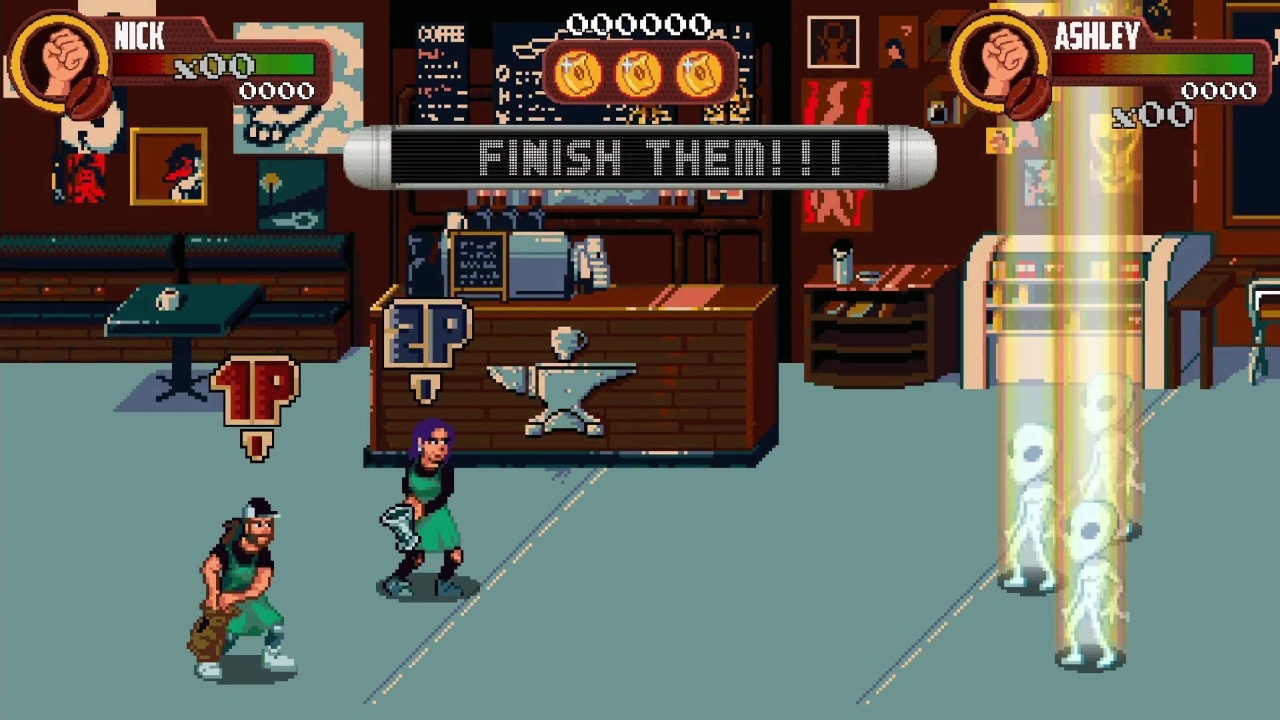 Metal and video games have gone together for a long time, and Mega Cat Studios is just the next in line of developers who decide to marry together great action and some heavy riffs on the soundtrack. From things like Brutal Legend to Slain and Double Kick Heroes, people love the idea of head banging, hard thrashing jams to drive along whatever scenario they may be landed in. I have to admit, I wouldn’t have thought that baristas and coffee would be the next pairing, but here we are, in Coffee Crisis, a neo-rogue brawler where aliens, video games, metal and coffee collide.

Nick and Ashley are your average coffee slingers at Coffee House HQ when the Smurglian race decide to spring their attack on the planet Earth. Turns out they’ve been here for years, harvesting our Wifi to make their own version of the Internet, and now they’re upgrading to steal our music and coffee, probably to pervert for their own nefarious reasons. If there’s one thing that Nick and Ashley are wont to give up without a fight, it’s everything I just mentioned (grammatically those could technically be one thing if phrased correctly). So, using the power of the special Six Demon Blend of coffee, these two temporarily close up shop to go pound heads and save the world as we know it. From little green men to possessed humans of all shapes and sizes (bodyguards, grandmothers, cowgirls), our heroes are ready to beat them to a pulp in the name of metal, coffee and decent Wifi! 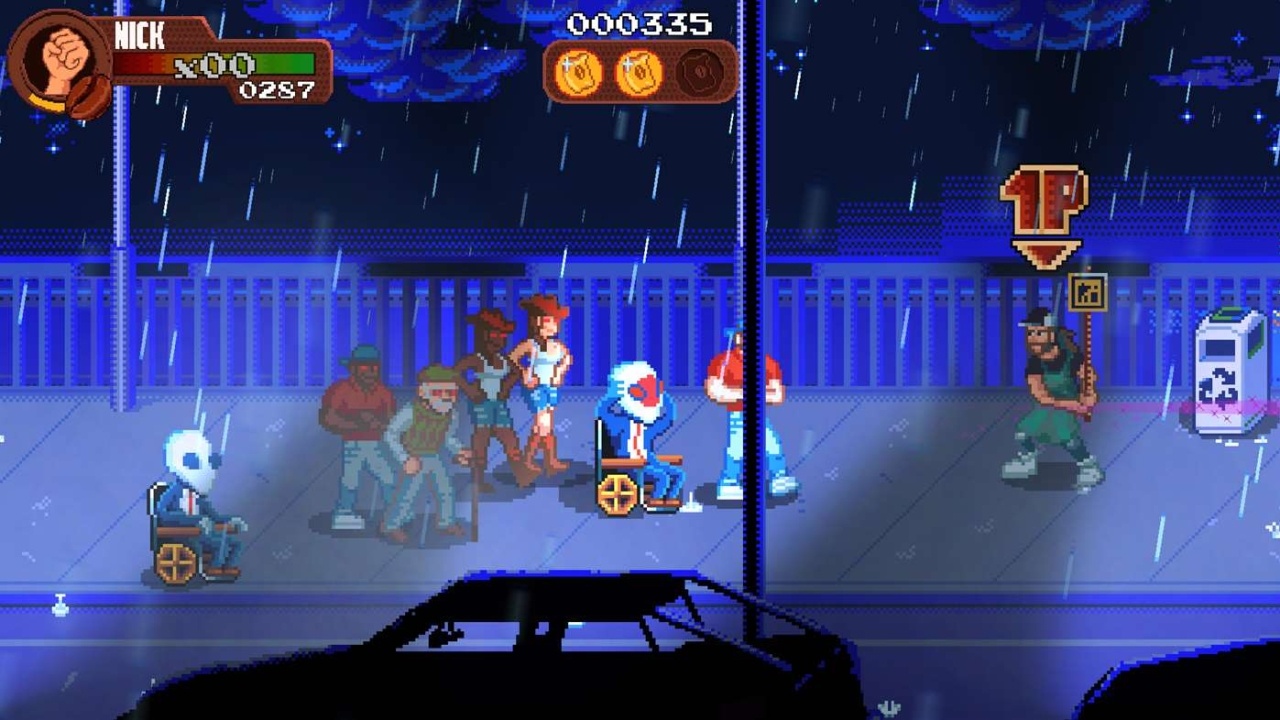 Coffee Crisis presents as a sidescrolling beat-em-up with the option to be either Nick or Ashley and the inclusion of two player co-op mode. Each level, you have to beat the ever-living snot out of a bunch of aliens who appear on the screen, sometimes looking clearly like aliens (including a handicapable wheelchair alien) and sometimes possessing people’s bodies. The game does make it easy for you by clarifying that anything that isn’t YOU should be punched, so any hesitations about accidentally hitting a friendly NPC can be discarded immediately. You’ve got a strong and weak attack with your coffee sack/coffee pot, the ability to jump and do some aerial attacks, pick up weapons that are average at best and, naturally, a screen clearing powerup move that recharges over time. Oh, you’ll also get heavily into the habit of grabbing aliens and throwing them at other aliens. It’s the easiest and best way to avoid getting overwhelmed by crowds. The aliens will drop a decent amount of items from health packs to damage multipliers, and plenty of destructible scenery allows for additional items and food to drop. In short, on the surface, it’s a brawler. A competent brawler in design, to be sure, but a brawler nonetheless.

How Coffee Crisis differentiates itself from the pack comes in a series of packages. Firstly, the “neo-rogue” descriptor of the game refers to modifiers that are randomly selected at the beginning of each game. I rather like this, simply because roguelites are my jam and anything to make a game replayable in a good way is what gets my pot boiling. The first time I ran through the game (you can go start to finish in roughly an hour and change), it seemed like items dropped a little too generously, and it turns out that was a modifier hard at work. The second time it felt like the enemy swarms were significantly more dense and aggressive, which, again, I attributed to the modifiers. Though I couldn’t find a comprehensive list of the modifiers, you can glean from the photos that are presented exactly what you might have in store. Additionally, if you’re not big into that kind of random factor, you can turn them off in the options. However, I never met a run that felt impossible as long as I kept the difficulty reasonable: when it starts at normal, goes to hard, and ends with separate DEATH and METAL tiers, you know you’re in for it.

Also, there’s this fantastic balancing act going on with all the different elements that Mad Cat Studios is trying to keep in the center stage, and I think it’s executed marvelously. For those who don’t know, Coffee Crisis was originally a modern Sega Genesis release, which is insane for something that came out in 2017 but, hey, retro’s gonna retro. The result is that you have the original framework at play for a 16 bit game that makes it endearing: strong density pixel graphics, simple controls (that are awkwardly mapped to the Switch, but you get used to it) and tight levels that give you enough room to maneuver but not enough to open yourself up too much. Then, you’ve got all the behind-the-scenes extras, like the modifiers, the ability to use cheat codes and passwords for level progression, and some crazy stuff you can stumble onto if you enter debug mode. I absolutely love that cheat codes automatically disable achievements (yes, there are achievements!) but still allow players to have that wonderful, Game Genie style of play where suddenly the game is too easy. Like “one hit kills” too easy, but whatever, it’s fun. 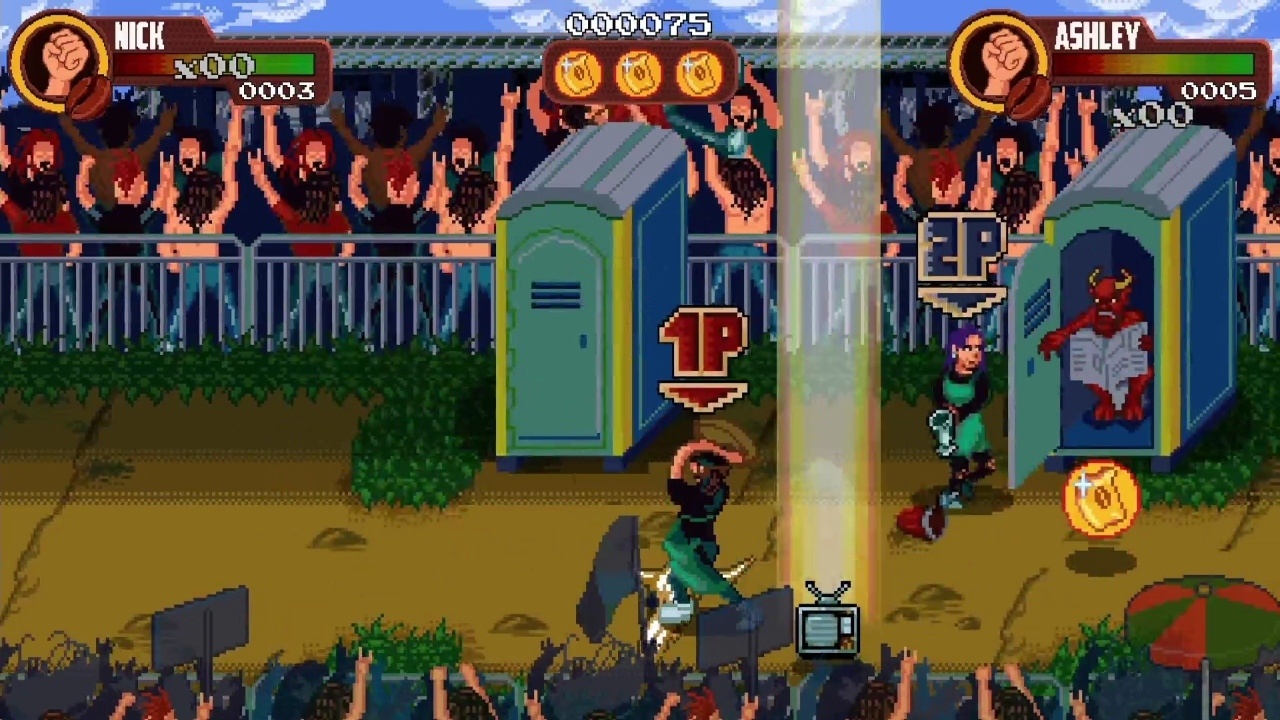 But the aesthetic and the tone of Coffee Crisis is where Mad Cat Studios really delivers. Sure, the combat is pretty good, but it can be frustrating when you get swarmed. Pick up weapons are stronger but also slow down your striking and can be confusing when you need to deal with enemies on all sides. The higher difficulties are completely insane and should only be attempted with two players because a single player simply cannot handle all that alien madness at once. Yet I look at this game as a wonderful trinity of humor, seriousness and soundtrack. The game is absolutely deadpan at how ridiculous the storyline is, and we make sure to keep in that mentality with the driving heavy metal soundtrack throughout. With games like Slain!, it came across like the music was moving the game along, regardless of the players involvement. In Coffee Crisis, it feels like the metal is responding to what’s happening on-screen, like an interpretive prog metal band is playing as they see things occur. When you pick up an invincibility powerup, the temporary strength and badass-ness of your character is captured by the music changing up and the riffing just going berserk as long as you are. If you’re a fan of some great licks, this is a shining moment for Coffee Crisis.

I know there’s a billion games coming out for the Switch right now, and writing reviews after December 2nd is going to feel like an exercise in futility as everyone and their mother gets onto the Smash hype train. But the indie devs are still here, and they’re still delivering some quality products. Coffee Crisis was born out of serious fandom and love for the 16 bit generation to the point where it was originally released there, in a time when cartridges are all but extinct. This game plays, feels and handles like an amazing Streets of Rage clone with a lot of serious work put into standing apart while still being a bit familiar. If you like retro brawlers, put down that weak cup of joe and get yourself a stiff mug of Coffee Crisis.

A fantastic reminder that the systems of old can still deliver a great modern experience if you code and design with passion and creativity.