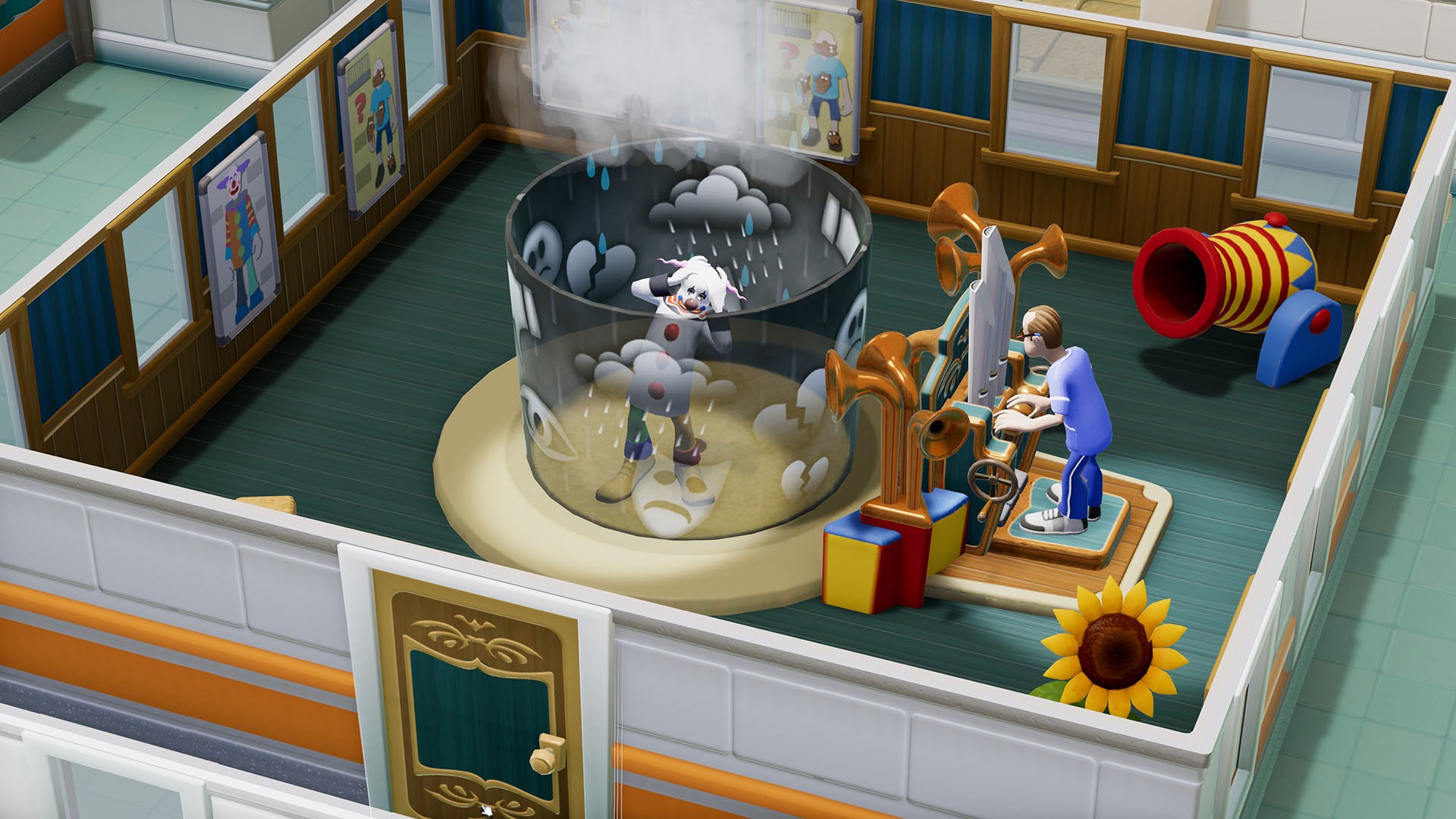 If you happen to be lucky enough to have been a gamer in the 90’s, then you would have had the opportunity to experience 2 Point Studios and Bullfrog Productions excellent game Theme Hospital. For me, it was one of the greatest simulation games ever to have been created. Its sublime mixture of man management, building, disaster strategy and dark humour made it an instant classic. Now you may be thinking, why on earth is this guy reviewing a game from 1997? Surely there are more recent titles to analyse? You’d be right! I’ve opened with my gushing praise for Theme Hospital as the developers have finally succumbed to crowd pressure and decided to present us with its spiritual sequel Two Point Hospital. We all know that producing a sequel can lead to disappointment, nostalgia can make the brain play tricks on us; rose tinted spectacles is usually the best way to describe the effect. Will Bullfrog Productions live up to the hype? Or should they have let sleeping dogs lie?

So lets start with the basics, Two Point Hospital has been available on PC since August 2018 and has been extremely well received. Now us console gamers have the opportunity to see what all the fuss is about. Like its predecessor you are charged with the day to day running of your hospital, you must hire staff, supply food, drink and entertainment, manage finances and ensure that you have the correct facilities in place to tackle the ever growing list of weird and whacky illnesses that come your way. As this has been directly ported from the PC, you’d be excused for being concerned about the controls and UI. These are 2 areas that are traditionally poorly executed when games make the leap to console. You can be assured that you have nothing to worry about, and I will go into more details later. I do own this on both PC and Xbox One, so throughout I will make direct comparisons where appropriate.

You are presented with a nonlinear storyline. Your aim is to successfully run as many of the local hospitals under your corporate banner. Now the idealist would say the target is to cure as many people as you can while reducing the risk of death. In reality, this is not the case. First and foremost, you are a business, so it’s all about driving the sick through the doors, charging them as much as you can for the pleasure, and then hoping that they survive, after all, a corpse can’t pay their medical bills. How do you increase those patient numbers? Improve your hospital, spend money on better facilities, hire the best staff, keep queues to a minimum, keep wards spotless and finally ensure your patients survive. Do all this and your reputation will increase, you will earn cash and kudosh points as a reward. People will travel from miles around just to be treated at your facility. 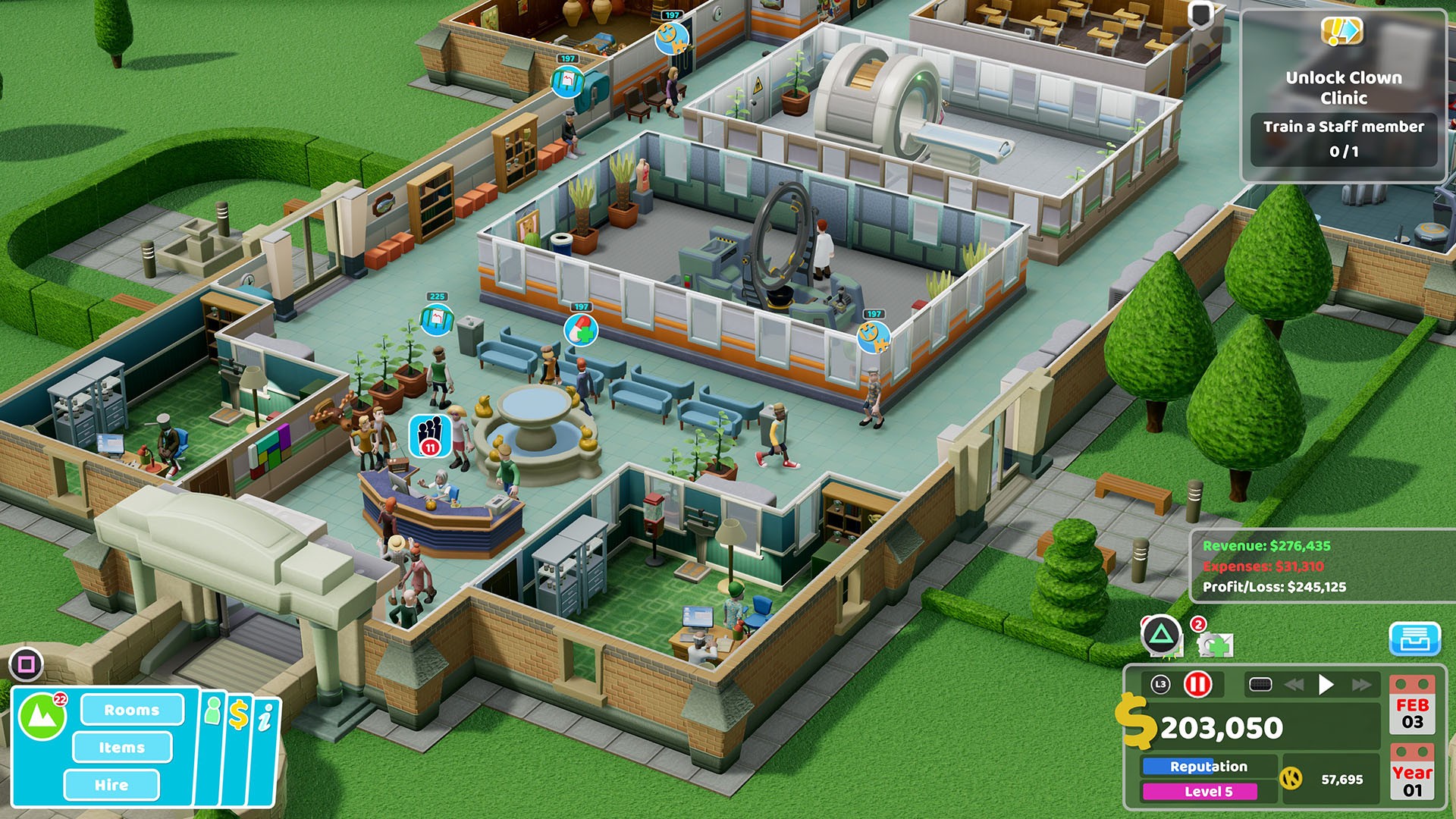 You start your experience at Hogsport hospital, this is effectively a glorified tutorial. Here you are introduced to the game’s basic mechanics. Your hand is well and truly held whilst you learn how to run this stage. The learning curve is great, it adds just enough challenge that you progress nicely while always feeling in control. It prepares you perfectly for life as a medical CEO, what it doesn’t tell you, is how crazy things are going to get. As each level plays out your planning must get better and better. Unfortunately, my wife was right, my ability to multitask is almost non existent, and its painfully evident whilst trying to balance the ever growing list of demands that each stage brings.

The game has a clear goal, improve the hospital rating from 0 to 3 stars. This is achieved by completing mini tasks such as; cure a number of patients, earn a set amount of money, or improve the hospitals value. None of them are massively challenging, until you take into consideration the problems with the everyday running of your health centre. Health inspectors will want to see how you are progressing, medical emergencies must take priority, this is where the ability to multitask comes in handy, for me I just paused the game to give me time to think. As time rolls on you will be given the opportunity to upgrade equipment, everything works quicker and patients hand over more cash for the improved service. However, these improvements come at a price. While equipment is being upgraded it can’t be used, people can’t get cured, you don’t get paid and they will die. The improved machines introduces one of the key gameplay mechanics, that is character attributes. Without the correct skills your staff can’t and won’t complete a selected task. You have 2 options; hire staff who is currently trained, or educate them yourself. The second option involves a lot of time and resources, but ultimately I found it the better path to take. The game has lots of intricate layers which are fortunately introduced slowly as the play develops, this kept the gameplay fresh, and made the learning curve not too challenging.

When playing I found that loading times were noticeably longer on the Xbox One in comparison to the PC. It didn’t ruin the flow of play, and if you haven’t tried to PC version it won’t be anything to be concerned about.

The developers are clearly fans of toilet humour, and dark jokes. This was a reoccurring element in Theme Hospital, so I was very pleased to see the jokes being utilised throughout in their latest endeavour. I don’t want to spoil them for you, as they will make you chuckle, but one that you will be introduced to very early is “Turtle Head” a disease that has you hiding your head within your body.

The comedy continues through the audio. I have to say the choice of music and sound effects are absolutely phenomenal. The only thing that is better than the songs is the hospital radio and announcements that are played sporadically throughout each session. If you’ve had to spend some time recovering in one of our fine NHS establishments, then you will be able to relate to the tongue-in-cheek radio station. I could happily sit and listen to it on repeat, it is comedy gold. The sound effects perfectly accompany the diseases and emphasise their weird and wonderful nature.

Next to the humour, the art style is probably one of the areas that players who have experienced Theme Hospital will feel most at home with. They have successfully managed to capture the look and style from their original title, but dragged it up to being relevant crisp and colourful enough for a 2019/2020 audience. With a delightful cartoon style, bold colours, and distinct lines, every detail is clear and easy to see. A number of the diseases have obvious physical side effects, and these are apparent and easy to spot. The UI is simple and not cluttered, menus are designed well, and easy to navigate. On PC, all of these areas are superior, that’s not to say they are not done well on the Xbox, it just looks crisper and handles better on the PC. 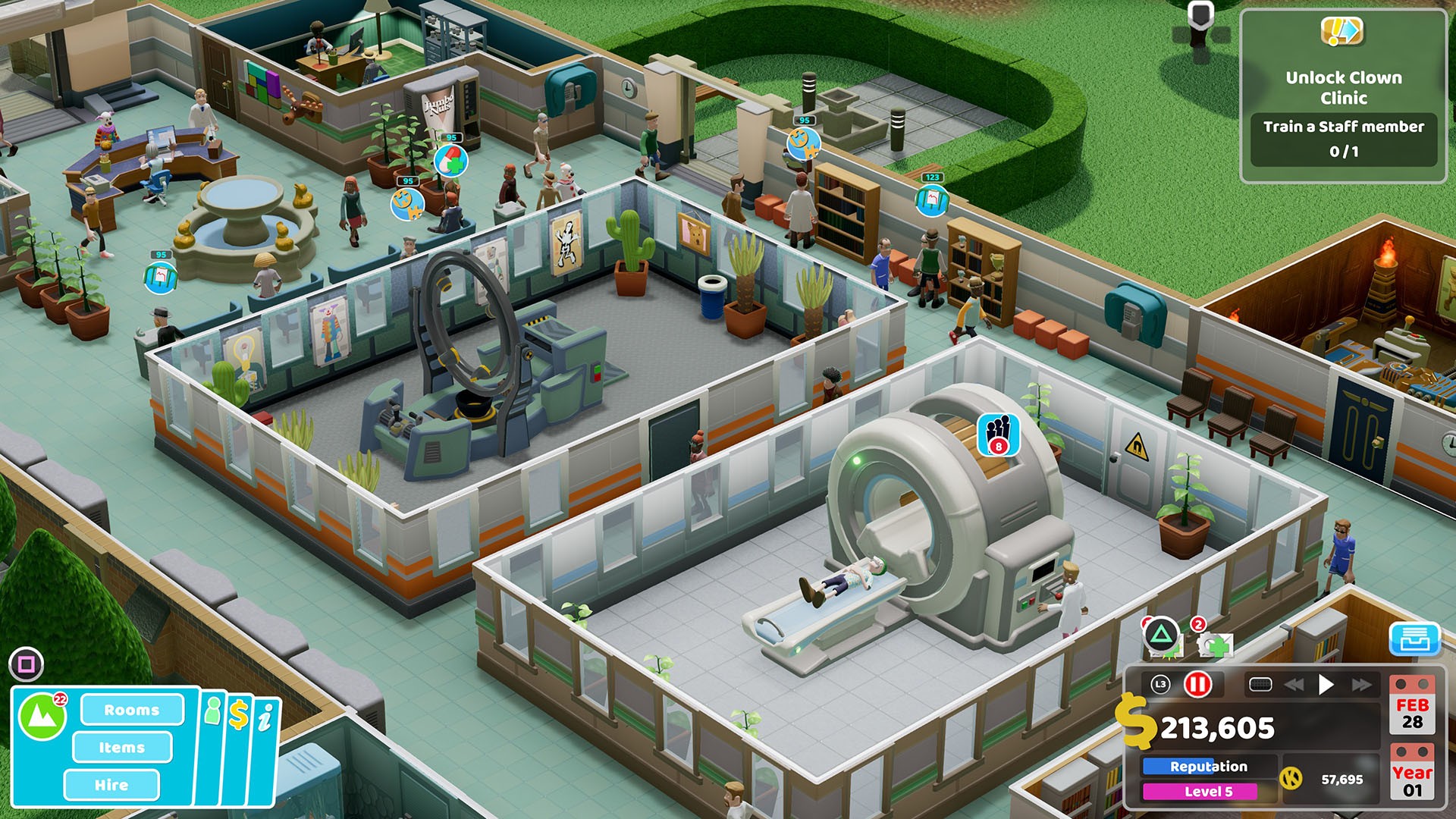 Any form of simulation game is going to handle better when using a mouse and keyboard, I think even the most hardened of console fans has finally accepted this fact. When a PC game is ported, it’s no longer a case of which feels better, its more how well does this perform using a controller? The answer is pretty darn well. The button mapping has been completed in such a way that everything is logical, you really don’t have to think about what you are doing. Movement around the map is smooth, and using items and placing structures is easy. The one negative I did find, was when moving offices around, any items left would be difficult to select, though it wasn’t a major issue, it was just annoying, having to move the cursor bit by bit until it allowed you to select it.

As you’ve come to expect from this genre, there is an awful lot to do, the Xbox version is no exception to this rule. With the obligatory achievement list to work your way through, and Bullfrog’s career list to obtain, there are a lot of tasks to complete. If you then add on top the requirement to obtain 3 stars each stage, you really do have one mammoth job ahead of you. The tasks aren’t going to be to everyone’s taste, but unlocking and upgrading all the equipment will be something that is achievable, and will have you returning for more.

With most titles that I review, I have a little grumble about at least one area. I’m a pretty grumpy middle aged man in that respect, maybe my standards are too high. With Two Point Hospital I honestly can’t find anything to fill this section. If you were to strictly compare it to its PC version, then yes, you could say it’s lacking in certain areas, but that would be true of nearly every game that was ever created. The developers have done a great job of creating a fun, yet challenging game with very few drawbacks.

Sequels usually should be kept as an idea, a plan for what the developer could have done better, but ultimately kept locked in a box never to see the light of day. Now I’m not saying anything about franchises, as we all know they are usually successful, I’m referring to a true sequel such as Jaws to Jaws II, it should never have happened. 2 Point Studios have done an amazing job of creating a spiritual sequel that maintains the soul and feel of the original. With this also being available on Gamepass on Xbox One, all you have to do is download the mere 2 GB file, and you too will enjoy creating your hospital and tackling the comically odd diseases that come your way.

An amazingly in depth simulation game that will have Theme Hospital fans excited. Step forward and try to cure the world of disease, one weird and wonderful illness at a time.