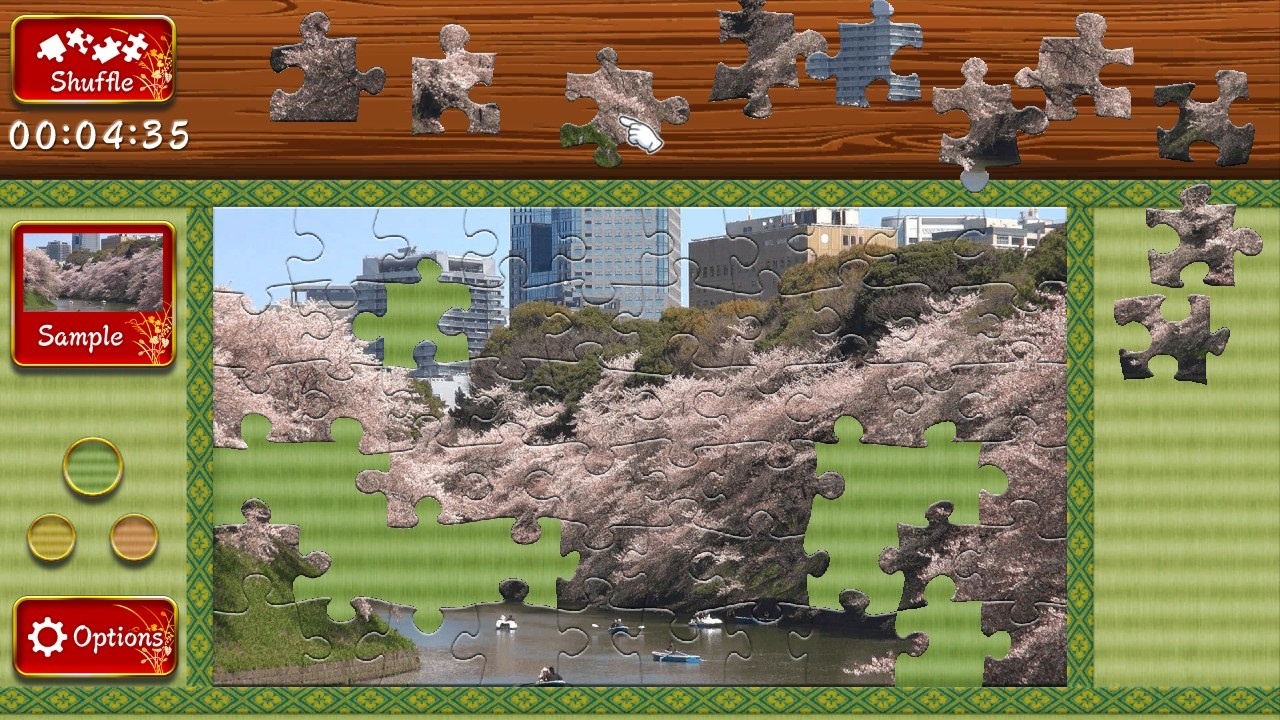 It can’t be denied that jigsaw puzzles have long provided a relaxing pastime for young and old alike. From quaint sceneries to action depictions, this form of entertainment can provide many hours of amusement towards a final goal of compiling its many pieces into one grand portrait or landscape. Animated Jigsaws: Beautiful Japanese Scenery, a new Nintendo Switch title developed by DICO and BottleCube, with publishing by Rainy Frog, offers a different premise to the usual formula of jigsaw puzzling; providing a unique take with its moving images that brings the genre to life.

Animated Jigsaws brings you ten differing puzzles, each one depicting a scene from Japanese culture that incorporates famous locales such as Mount Fuji, Kinkakuji Temple and Matsumoto Castle to name but a few. The natural beauty from this intriguing country is further enhanced with scenes that are taken during different phases of the seasons; such as spring, summer, autumn and winter. Each of the puzzles contains an animation that plays on a loop, whether it be boats rowing along a blossom-lined river in Tokyo, clouds passing over the rippling waters in Nagano or snow monkeys enjoying a bathe in a natural hot spring. These moving images provide a nice backdrop upon which to build and provides a really nice aesthetic to the final product.

Each of the puzzles comes in three sizes; sixty, one-hundred and twenty and two-hundred and forty pieces, with each increment and puzzle becoming unlocked after each respective completion. This number of varying puzzle pieces provides a good challenge that passes the time at your own pace, as well as offering a calming way with which to unwind after a hard day. The screen presents a layout that sees a tray containing the all of the pieces, set above a main board onto which you build the puzzles. A gutter runs down the right-hand side which can be used for storing pieces and the left side of the screen displays a referencing picture as well as an options menu and a timer which records the time taken for each puzzle. 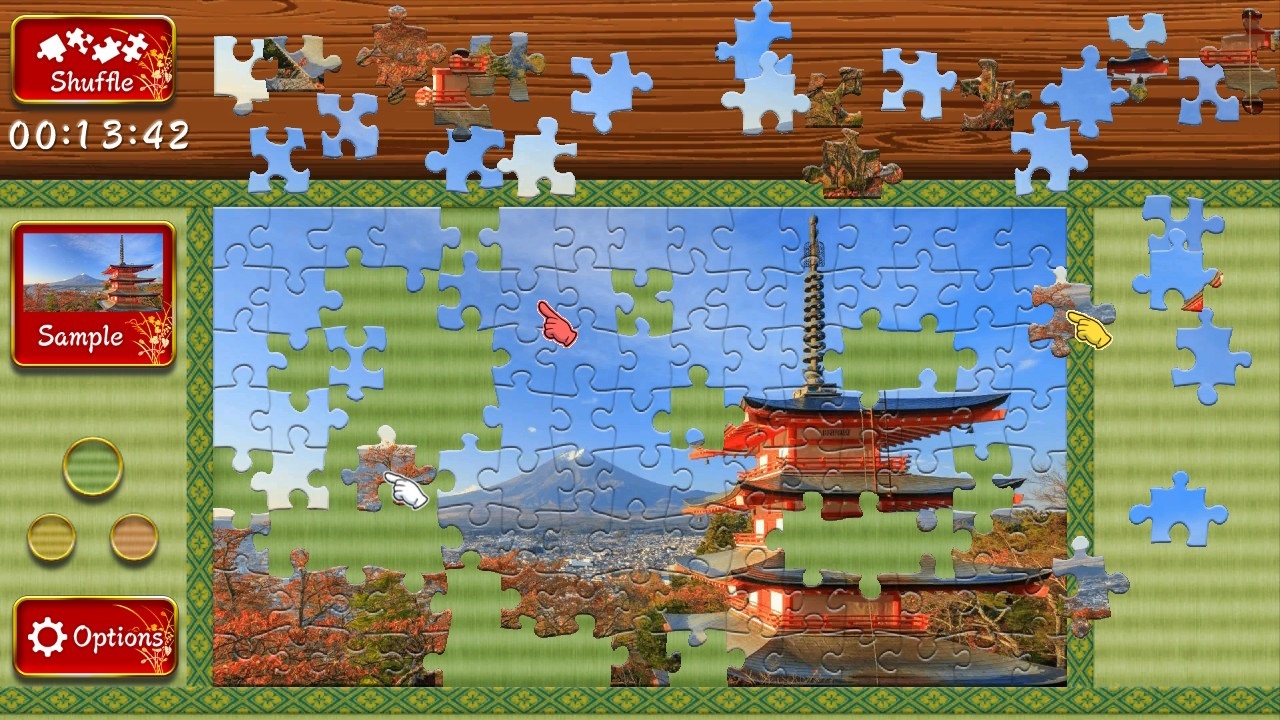 As well as these features, the screen also incorporates an option to change the background colour of your building board and various selections in how you sort and display the puzzle pieces along the top of the screen. The colour-changing aspect of the main board is purely a cosmetic feature and doesn’t add anything to the game, however, it does provide a form of personalisation and a way of distinguishing between the board and puzzle should any of the pieces, or picture, clash or blend with the background selection. The option to organise your puzzle pieces is a nice inclusion though, with selections that separates bordered and inner pieces into two neat and distinct piles.

The whole presentation of Animated Jigsaws is neatly done, with a very easy-to-use interface that will have you building in no-time at all. Each of pictures within the puzzles are crisp, clear and concise, as are the animations within them. Everything is neatly placed from menu selections to puzzle pieces. Incorporating both touchscreen and conventional control schemes, including pro-controller support, this is a nice, relaxing title that can be played either at home or out-and-about. A soundtrack of traditional Japanese music plays throughout, although I found this to be a very distracting feature. Thankfully, the option to mute the musical score has also been included.

Building each of the puzzles is also a simple affair in the execution of the game’s mechanics. It’s simply a drag-and-drop affair, with each piece slotting into its respective place upon the board and with each other; you can even build segments which can be put aside for use later on in the puzzle’s development. There’s no fiddling around trying to get pieces to fit or scrambling through a graphical mess of jumbled pieces. With its automatic saving capabilities, the game can also keep track of your progress mid-build, ready for you to carry on from where you left off at a later, or more convenient, time. The whole presentation from start to end has been very expertly done and well thought out. 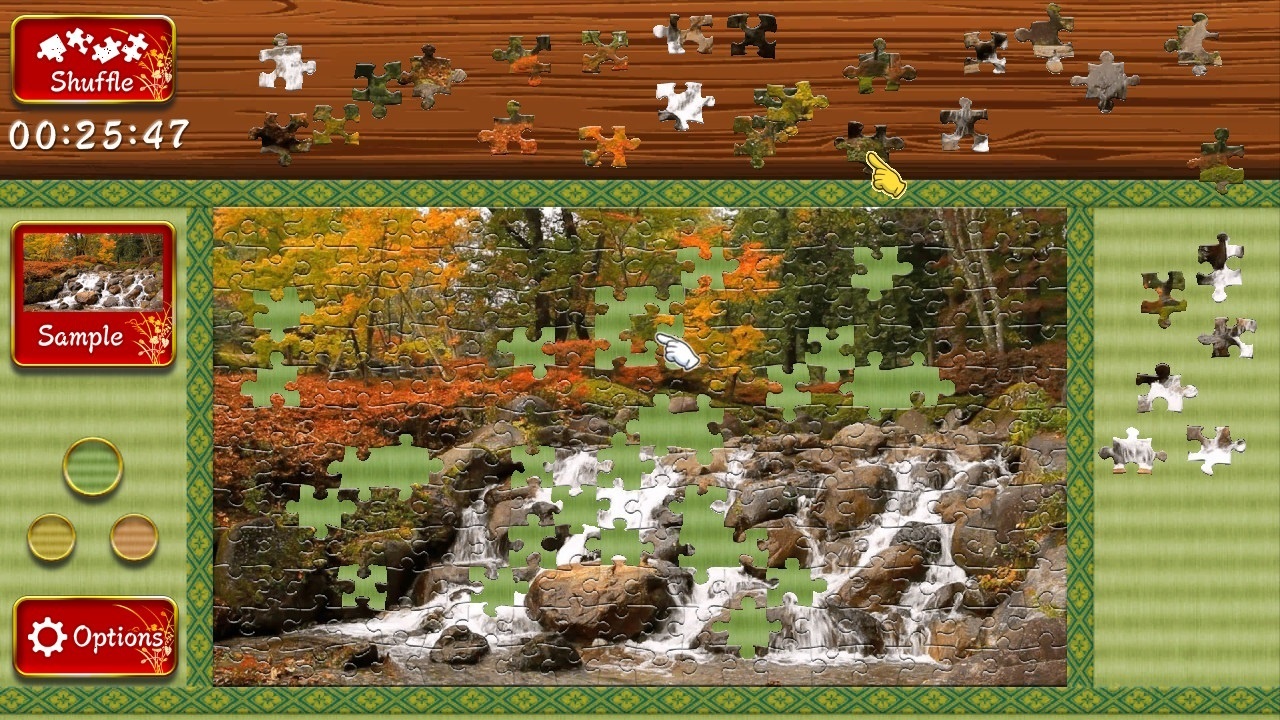 Completing each of the puzzles presents you with a gallery, in which you can view your finished creations, along with their animations, to your heart’s content. These galleries also contain information for each of the puzzles; ranging from the pictures descriptive title and the time spent building the puzzles under each relevant tile number. The game also incorporates a local-multiplayer function in which up to four players can work together in the building of each of the puzzles; a nice inclusion that can help in bringing people together.

Overall, there really isn’t a lot wrong with Animated Jigsaws. Its presentation and interface are easy to digest and as a jigsaw puzzle builder, it provides a suitable experience that is both relaxing and enjoyable. Although it only offers ten different varieties of puzzles, its inclusion of three different totals of puzzle pieces adds a surprisingly good challenge, as well as provide a form of longevity to the title and replayability. Video gaming doesn’t always have to be about blasting aliens, dungeon crawling and endless adventures. It can also be about creativity, problem-solving and relaxation; there’s no seat-of-your-pants excitement here. However, what is does offer is something that should be incorporated into whatever style, or genre, of game you are playing; and that is escapism, and in that respect, Animated Jigsaws is a title that certainly delivers.