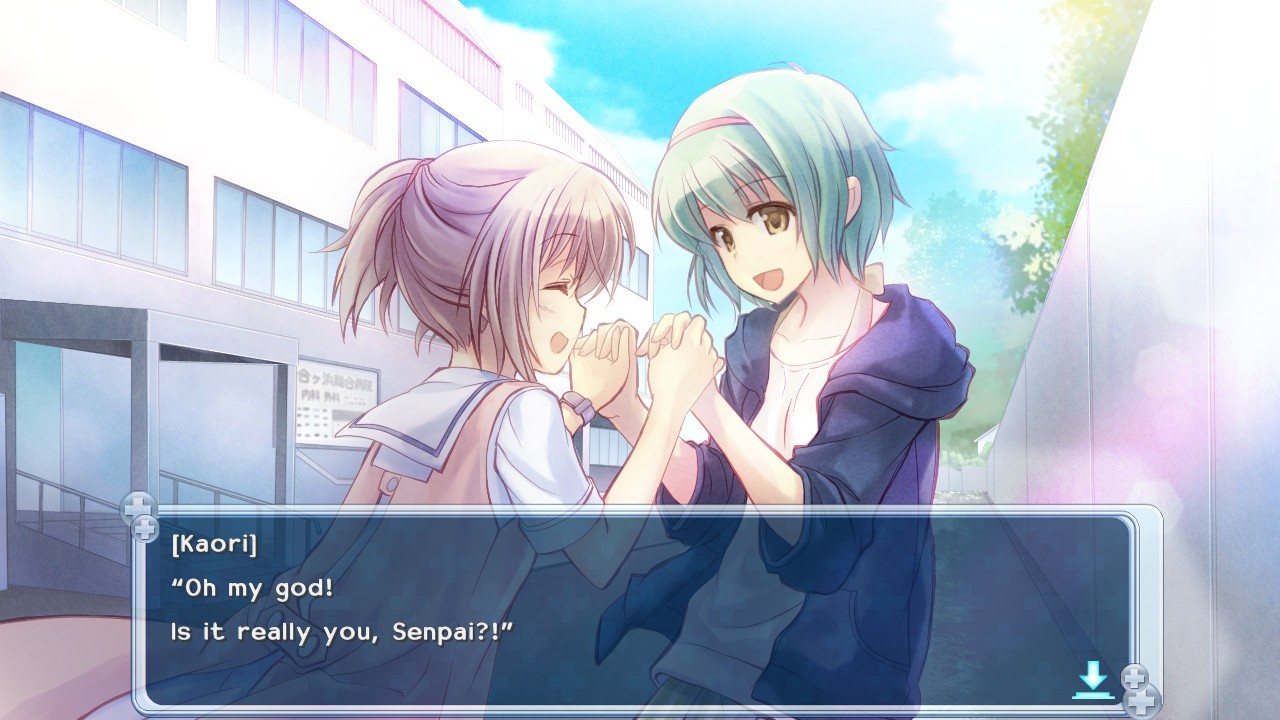 We’ve seen our fair share of romantic, harem-esque visual novels on the Nintendo Switch. Some have been atrociously bad and had me trying to track down a Visual Kei boyfriend or a Harry Potter knockoff, and some of them have involved overly cute cat maids (that’s more than one game series, my God) or a time travelling, String Theory waifu. The point is that we’ve seen a lot for these sort of games that covers all aspects of quality, but there hasn’t been a proper blend of the romantic and the compelling just yet. My Darling’s Embrace was probably the closest I’ve come so far, but even that was a bit more goofy and very aware of how silly it was to thrust these characters into that particular reality, but I digress. For a long time now, I’ve been interested in the yuri side of things: that is to say, girl meets girl sort of games. Not because I’m looking for something to ogle, but because I feel like I’ve seen almost everything else and I’m curious about the writing and styling (and I’ll be eager for the yaoi games when those arrive as well). Thanks to DEGICA, the famous and fabled games from Kogado Studio have arrived, love stories about nurse life written by two actual nurses (who use pen names to fly under the radar, totally understand). This is the first of two looks at some incredibly interesting games, with the first here being Love Nurse Syndrome.

Love Nurse Syndrome is the story of Kaori, a young girl who has recently completed nursing school and is eager to start her life by helping and caring for the patients of Yurigahama Hospital. Almost immediately, she runs into Nagisa, her upper classmate from her high school days, and the two reconnect as the story begins to unfold. We eventually learn that Kaori is interested in being a nurse due to a massive accident she had when she was younger, which may or may not connect to a unique power she seems to possess. Kaori has always been able to lay hands on herself to get clarity and focus, but it looks like she can lay hands (like a D&D cleric) and actually soothe the pain and weariness of her patients. As things move forward and more and more people come out of the woodwork (the head nurse, the Kansai-speaking Yasuko, and even a couple of patients) who seem to have an eye for Kaori in a more than friendly sort of way. In fact, Kaori must be careful; certain views of affection can lead to obsession, and you can easily get shocked by the way this seemingly adorable and demure visual novel goes.

Let’s list a few things right away that may or may not sell this game to you. Nurse Love Syndrome, despite the title, is not a hardcore pornographic romp that ends with a massive nurse orgy. There is still no sexual intercourse or abject nudity in the Nintendo Switch ecosystem, so please shop elsewhere (and on a different platform) if you really want to see anime sex. That doesn’t make the game innocent: panties are a common thing to pop up (both on and off characters), there’s plenty of strategic nudity in which arms or hair or something else can block the appearance of nipples, and there’s plenty of girl on girl kissing and touching that occurs. As a yuri novel, it feels a lot more organic and romantic in progression than certain other visual novels, but it definitely happens and could make you feel odd playing this on the train or at a family gathering, so please exercise discretion and a bit of a social compass. Still with me so far? Great, let’s move forward. 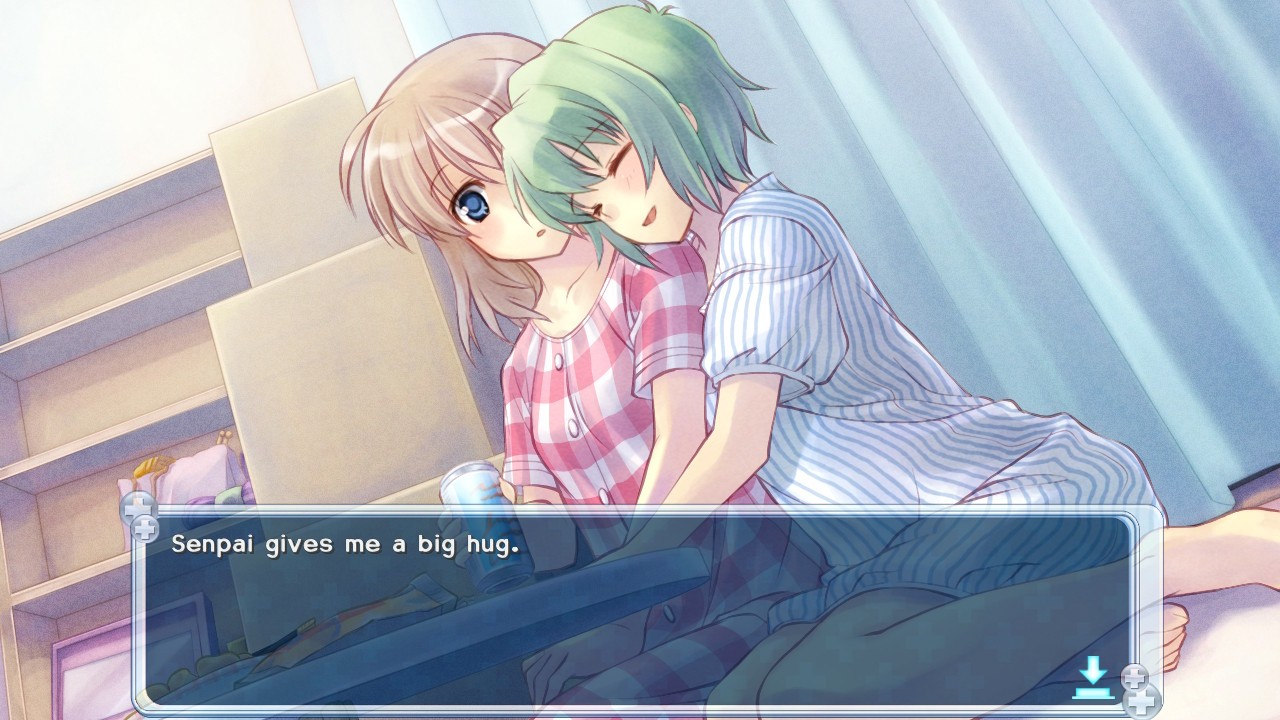 Nurse Love Syndrome is a LONG game. I’ve had this on my Switch for close to a week now, I’ve been putting in a few hours each day, and I know, for a fact, I haven’t seen all the endings. One thing that really set me back is that you need to understand that the menu uses different terminologies for saving and loading than you’d imagine. While this might seem natural to some people, I didn’t realize that “Patient Log” was the menu code for Save, and “Re-Examination” was how to load. It took me several start and stops with a lot of lost data to finally figure this out, and I feel dumb because I should have just read the manual. The quick save function only seems to work once you actually begin working on patients yourself, so you need to read through a lot of exposition, explanation, encounters, a couple of smaller choices and plenty of medical terminology before you can jump back a few minutes easily on the Switch. Thanks to the sleep function, this isn’t as arduous as it could be, but if you’re playing something simultaneously you need to set that aside for the immediate future. There also is a bit of a gap between when you make decisions, and it’s never initially clear how much of an impact your choices have (unless you’re following an ending guide online). Take that idea and couple it with the fact that I have two other visual novels currently sitting on my system, and you can imagine that it is a demanding situation…if you let it be.

But then once things get going, you really get sucked into the world of Nurse Love Syndrome. First and foremost, the aesthetics of the game are delightful and charming, as you might imagine them to be. The artwork has a soft, almost colored-pencil quality to it that keeps the characters descript while still being ethereal. So when you change between the hospital, the dormitories, specific rooms for particular patients or the various wings of medical research, there’s no starkness that makes things feel anaesthetised. The art actually makes hospitals seem approachable, which is a feat unto itself. It also makes the characters cute without falling into tropes that other visual novels might pose. Take, for example, the character design from NekoPara, where the characters are all breasts and legs and constantly making big eyes and really HURLING sexuality at you. With Nurse Love Syndrome, things are quieter, a more subtle approach that lets you slowly imprint upon the person or persons that attract you the most. Since Kaori isn’t just a blind pervert or a faceless Mary Sue, you get to help her decide where her heart might lie, and it’s more sweet and gradual. Also, I love that there’s no question or stigma that comes along with it: girls are just attracted to girls and there’s no “But I thought guys were my thing!” sort of stop gap. There is just your natural attraction and where it leads. 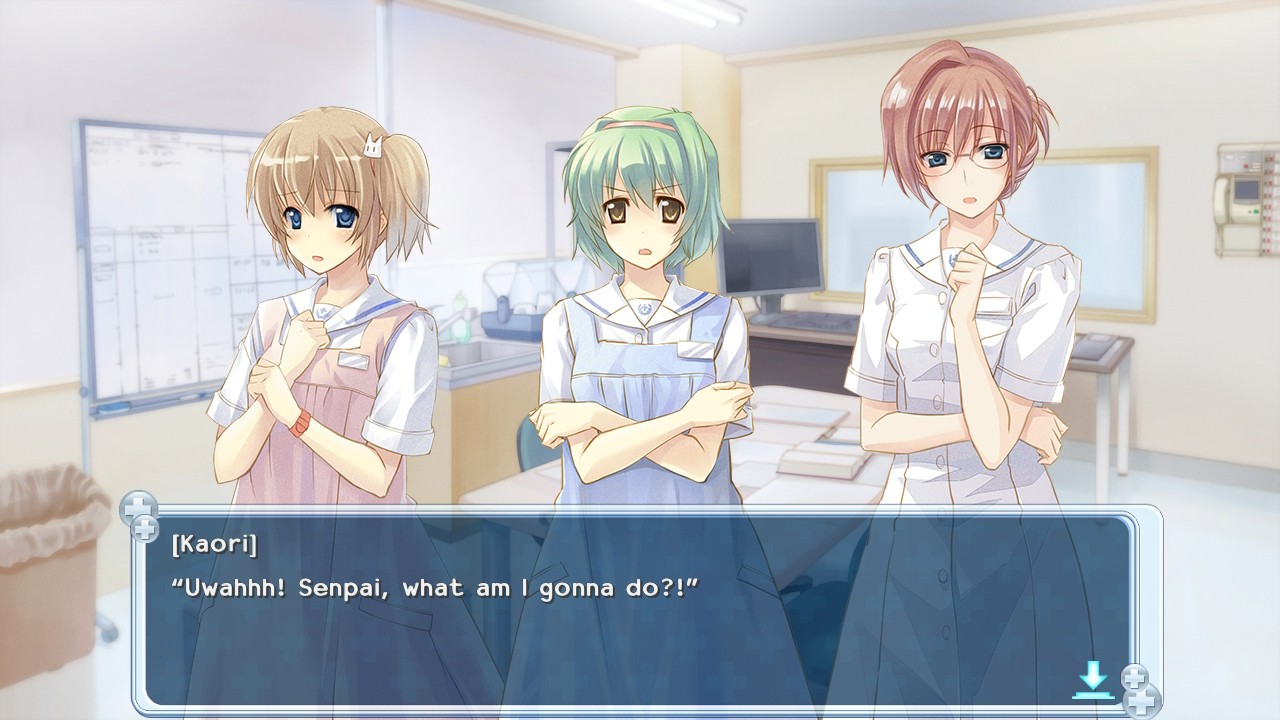 The story writing is the most important part of any visual novel, and Nurse Love Syndrome delivers on multiple levels, some of which are unique to this title. First and foremost, the presence of actual nurses in the creation of this game means that the terminology and cause/effect of different medical procedures and complications is significantly more accurate than most other games. It’s very rewarding to know there’s a basis in fact where everything that happens within this hospital has some grounds with what could actually happen if a patient isn’t treated well or there’s a problem with an IV that leads to infection and worse. While the focus on Kaori and her search for meaning, love and her own direction is the most important, it’s a fantastic bit of background that so much revolves around the patients, their treatment and what would and could not happen in the course of a day in the hospital. Granted, it can still be pretty heavy to get through everything in one sitting (in terms of each of the patients), but it can be rewarding in the same swing.

However, the biggest get from this game (as it should be for visual novels) is the twists and turns that happen with our protagonist and her companions, and that’s something Nurse Love Syndrome delivers in SPADES. It’s not enough that we already have a pretty well rounded cast of characters, each with their own direct or tangential connection to Kaori: that would be enough o drive the game forward in a big way. No, it’s also something that the good endings are good and sweet, and the bad endings are BAD. Like, sure, people can die: that’s a stone cold fact, especially when you’re working in the medical profession. They can die from random accidents or complications, but it happens. But I mean that the heartache and heartbreak can manifest themselves into some serious dark and heavy stuff. I don’t want to spoil anything, but this is like when I stepped up to play School Days and very quickly found out there is something WRONG with Kotonoha, but it didn’t feel like my doing in Nurse Love Syndrome. You want to seek out all of the good endings, but do yourself a favor: make intentional choices to get the bad endings first. It not only makes the good endings sweeter, but it helps numb you if you end up making a mistake and landing back on a bad ending. There aren’t nearly as many choices as you might think to end up in one place or another (and there are even a fistful of surprise endings that just spring up at you), so make sure you’re really ready before diving into this one.

All in all, Nurse Love Syndrome was such a pleasant and exciting surprise to play on the Switch. I didn’t realize how done I was with a lot of overt sexualization of female characters in visual novels until I got a chance to play something that was still enthralling without being so blunt. The storyline is wonderful, the game has a ton of replay value and some fantastic Japanese voice work, and it’s a storyline that can appeal to anyone willing to put in the time and effort to read and decide where they’ll go. If you’re looking for a great novel to keep you warm and cozy, this is the perfect place to start. But don’t forget: after a basic Syndrome comes Addiction…

An interesting and cute visual novel that delves into the idea of love blooming in a hospital, but don’t be fooled: some truly complex & dark twists lie ahead.