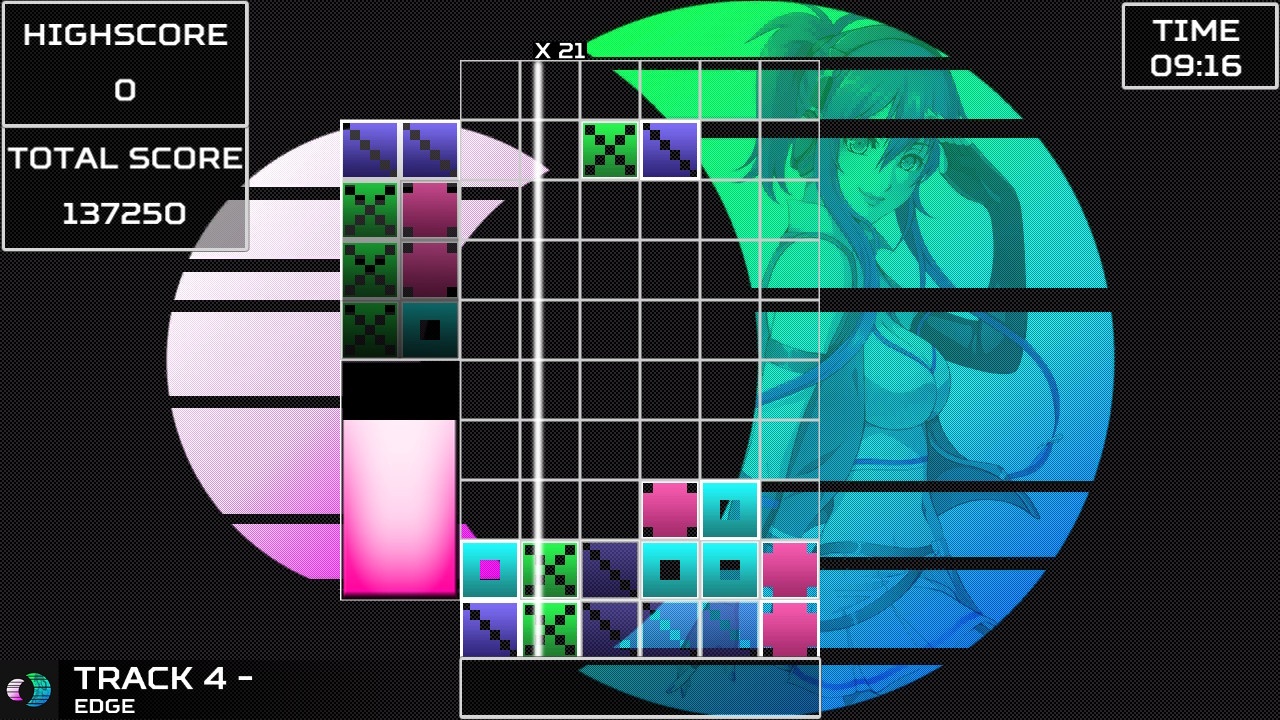 When you seek to make a new flavor or a new genre of something, no one ever hopes for middling success. I highly doubt the makers of Reese’s Peanut Butter Cups threw the two items together and said “hope like sixty people like these.” But sometimes middling success is all you can hope for: the top of the mountain is so strongly fortified you can never penetrate it, and the bottom is all awash in clones, IAP and broken concepts. So I hope that JMJ Interactive isn’t put off when I say that their puzzle rhythm game isn’t going to change worlds, but it might make someone’s just a bit brighter and funkier.

The objective of Akihabara – Feel the Rhythm Remixed is a strange but simple one. On the one hand, it’s a Tetris-style stacker in which a pair of shapes descends from the top of the screen and needs to find somewhere to rest below. You can swap things left to right but not top to bottom: your puzzle pieces will always be horizontal. Once you successfully connect four or more of the same shape, you can then clear them by striking them with the beat, which is represented by a constantly scrolling bar that moves in time with the music. Hitting the beat button will clear the shapes, but also give you points and build your multiplier based on how accurate you are with the tempo. Continue to build shapes, anticipate drop combos and hit in time with the music to build a high score as you seamlessly segue between different kinds of music set against an anime-interpretation of Japan’s infamous Akihabara streets.

For those of you out there romanticizing Akihabara, I have some pretty bad news: you can stop now. Akihabara stopped being this amazing epicenter of geek culture, otaku paradise and underground technology about a decade ago and it’s never really recovered. I won’t disagree that it’s still one of the best places for mainstream releases of visual novels, manga, questionable anime and cool game release parties, but the entire city underwent a massive cleansing to make it more tourist friendly and family oriented, and it just isn’t the same from when I was able to last visit a couple of years back. But the important part about Akihabara: Feel the Rhythm is that it does what current Akihabara is trying to do, in that it brings you beauty, wonder and sound that almost works together but not quite. 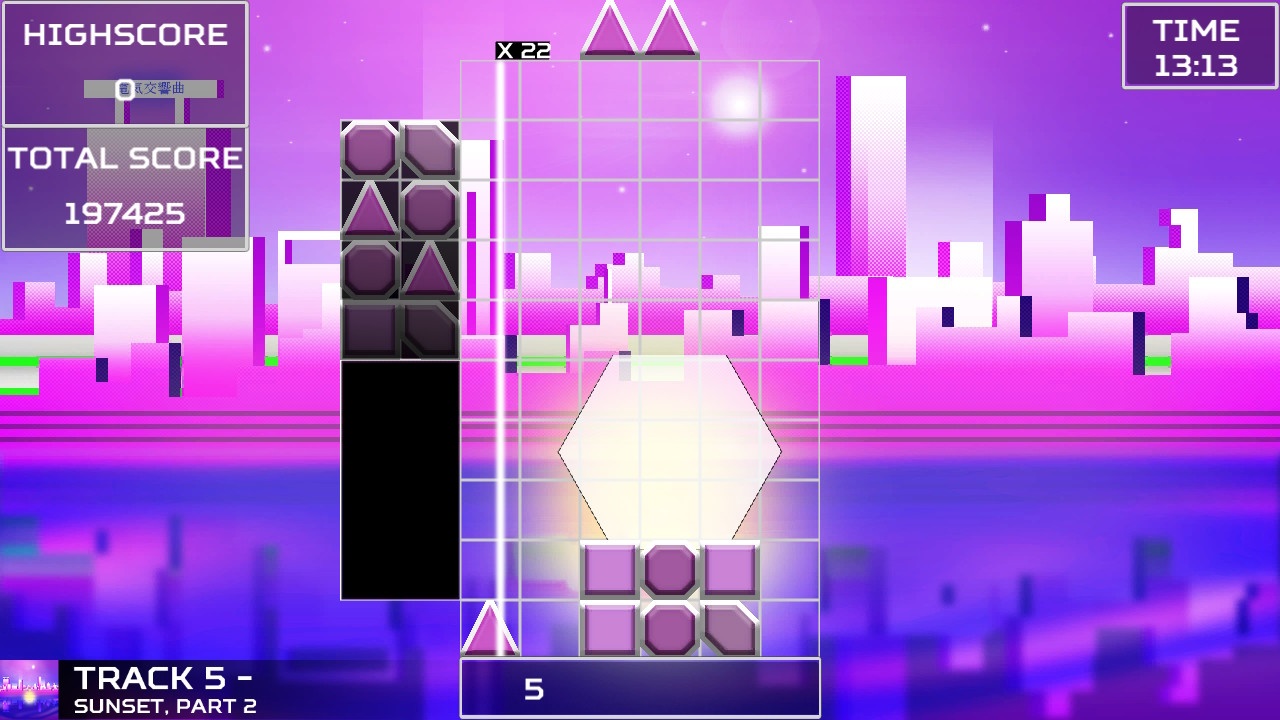 In the terms of visual presentation and audio, Feel the Rhythm is absolutely gangbusters. The aesthetics of the menus alone make the game grab you and draw you in, with a cute but somewhat generic anime avatar beckoning you to come on a journey, like you own personal guide between the neon alleyways and maid cafes. Also, good on JMJ to make her the icon for the game on the home screen, without any other text or weird framing, as it best draws the eye and reminds the player of what you’re looking for. As you play the game, the visuals of the puzzle pieces change on the fly to match the song, a trait that’s positively spectacular to view and sufficiently challenging to keep you on your toes. Move from standard geometric shapes to differently colored blocks, strange glyph cubes, absurd symbols and more as the music continues to hold your hand and lead you through an auditory tour of what they believe the streets would be like on any given day.

And the music really is phenomenal, there’s simply no discounting that. Akihabara: Feel the Rhythm Remixed has three different sort of campaigns to partake in, each of which paints a different atmosphere in which to play. The original campaign epitomizes what you’d expect from Akihabara, in which you get a lot of upbeat synth and driving pseudo-Vocaloid framing to capture the idea of strolling down a living, breathing animation. This is probably my favorite of the sets to play, even if it’s just the original, because it best lives up to the ideology of what the developers were going for. The Midnight Mix is something that really lends a slower, more relaxed and kind of ambient approach to the game. Everything is more mellow, actually reminding me a bit of trance and a bit of offshoot vaporwave that I’ve gotten into on rainy days. Midnight Mix is perfect for when you simply want to chill and enjoy a game that’s a de-stresser first and a puzzle game second. The Electric Symphony is, admittedly, a revisit to the original concept and feeling of the first mix, and it succeeds about as far as you’d expect. The beats are strong, driving and exciting, but they’re not dynamically different enough from the first to keep things 100% engaging. I would have preferred the composers try a totally drastic approach and done something different (maybe an Akihabara under assault sort of vibe), but it still sits well to complete the package and make for some great music. You do have the option to do individual tracks after you unlock them, but I always recommend doing a full campaign to experience the journey as a set. You shouldn’t listen to Explosions in the Sky as singles, and the same rings true here. 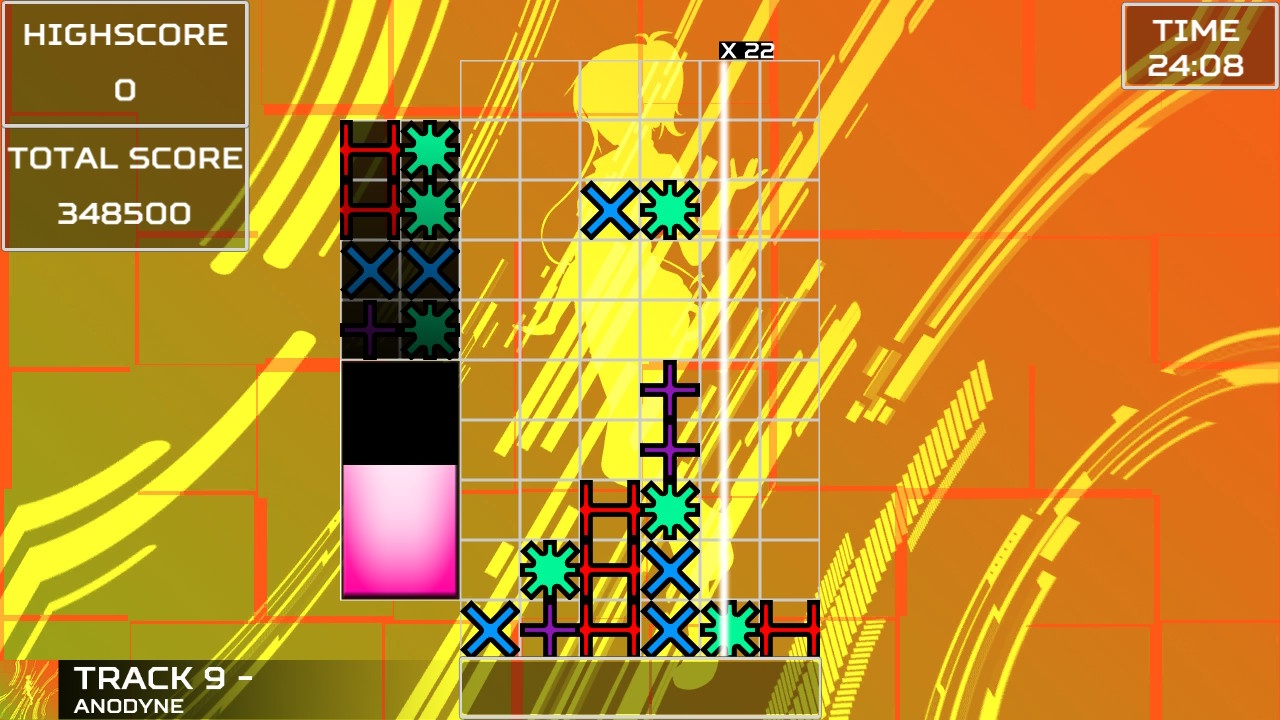 By now you’ve realized that I’ve purposely avoided analyzing the gameplay of Akihabara: Feel the Rhythm, and that’s because it’s the weakest aspect of the whole game. The concept that I described before – dropping shapes and hitting the bar in time to the beat – never really gels well enough to take off. You basically end up doing two things separately, not in tandem. You focus on lining up some blocks and calculating how fast the bar is moving, then you stop focusing long enough to mash the beat button in time to clear things up and make way for the future. The two ideas should, in theory, co-exist, but they never really reach harmony for me. So when I say Midnight Mix is a chill experience, I mean that it’s less of a hassle than the other two and I can get further and play it longer in that particular soundtrack. The original and Electric Symphony are both great, but you still need to equally divide your Tetris brain and your Bemani brain. For me, there was never cohesion, just one action then another, in a pattern, until I was too focused on the beat and got a game over. Oh, and I HATE that I can’t flip the pieces vertically, because that could have saved me a lot of frustration from not having a great set.

But here’s the thing: I’m more into music than puzzles. For someone who really enjoys puzzles, this could be a perfect introduction to more music games. Or vice versa: maybe someone who digs the beats could learn to love the stacking and move over to a slew of titles in that realm. The point is that Akihabara: Feel the Rhythm Remixed isn’t a bad game, but it’s also not even close to my favorite. The price point is more than fair, and the amount of music, the visual exploration, and the overall quality is pretty good, but my displeasure at how to play and how players engage is borderline damning. Approach with a grain of salt and please keep the facts in mind: this is certainly a different take on the rhythm games.

A rhythm game that neither drops the beat nor impresses with solos: it simply marches on, and does a decent job of it.