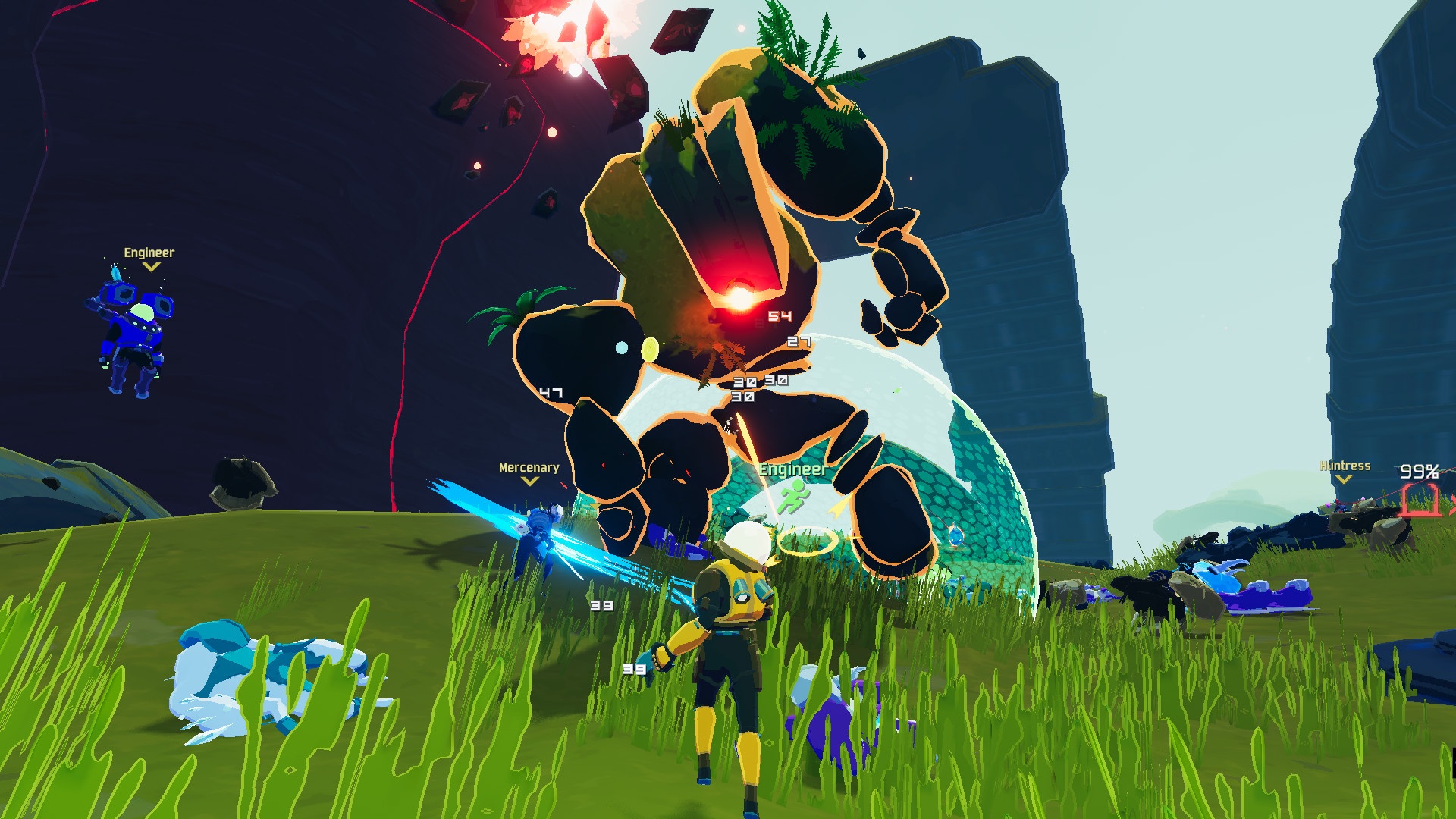 There’s something to be said for the risk/reward factor of any action or challenge that you partake in. For example, the lower end of this mentality is buying a scratch ticket and hoping to win some money. If you’re doing this because you’ve got five bucks that could literally not be spent anywhere else and it’s all in good fun, alright, buy that Mega Millions or whatever. If you’re buying the ticket because that’s your last five dollars and you desperately need to pay your rent, however, that’s a pretty bad situation to be in. Hopoo Games took their own devilish design and played some serious odds that they would be successful again in creating a new-yet-familiar approach to roguelite violence. Risk of Rain 2 is both the ultimate culmination of taking chances with gameplay and, in the same vein, taking chances with design.

Like the original Risk of Rain, you play an astronaut-turned-survivalist warrior who has crash landed and needs to find their way back home. In order to do so, you need to traverse multiple arenas full of enemies and discover a teleporter to bring you to the next area, so on and so forth until you find your way home. Also like the original, there are weapons and passive/active powerups strewn about that can be purchased with money dropped by dead foes, and a progressive difficulty meter that increases mob spawns and the toughness of the enemies the longer you play. A fast, lucky player probably only has about three stages before things ratchet into “Impossible” and then it just keeps getting harder. It’s the ultimate in collect-a-thon gaming, coupled with making split decisions about what to grab and what to drop. You can go at it alone or with friends, and, in my opinion, this should definitely be played with other people, preferably a full party. Hopoo Games is taking the smart approach and offering Risk of Rain 2 as a BOGOF situation, allowing players to gift a second copy of the title to someone else for free. Probably why this game has been out for about a week and it already has 500,000 players. 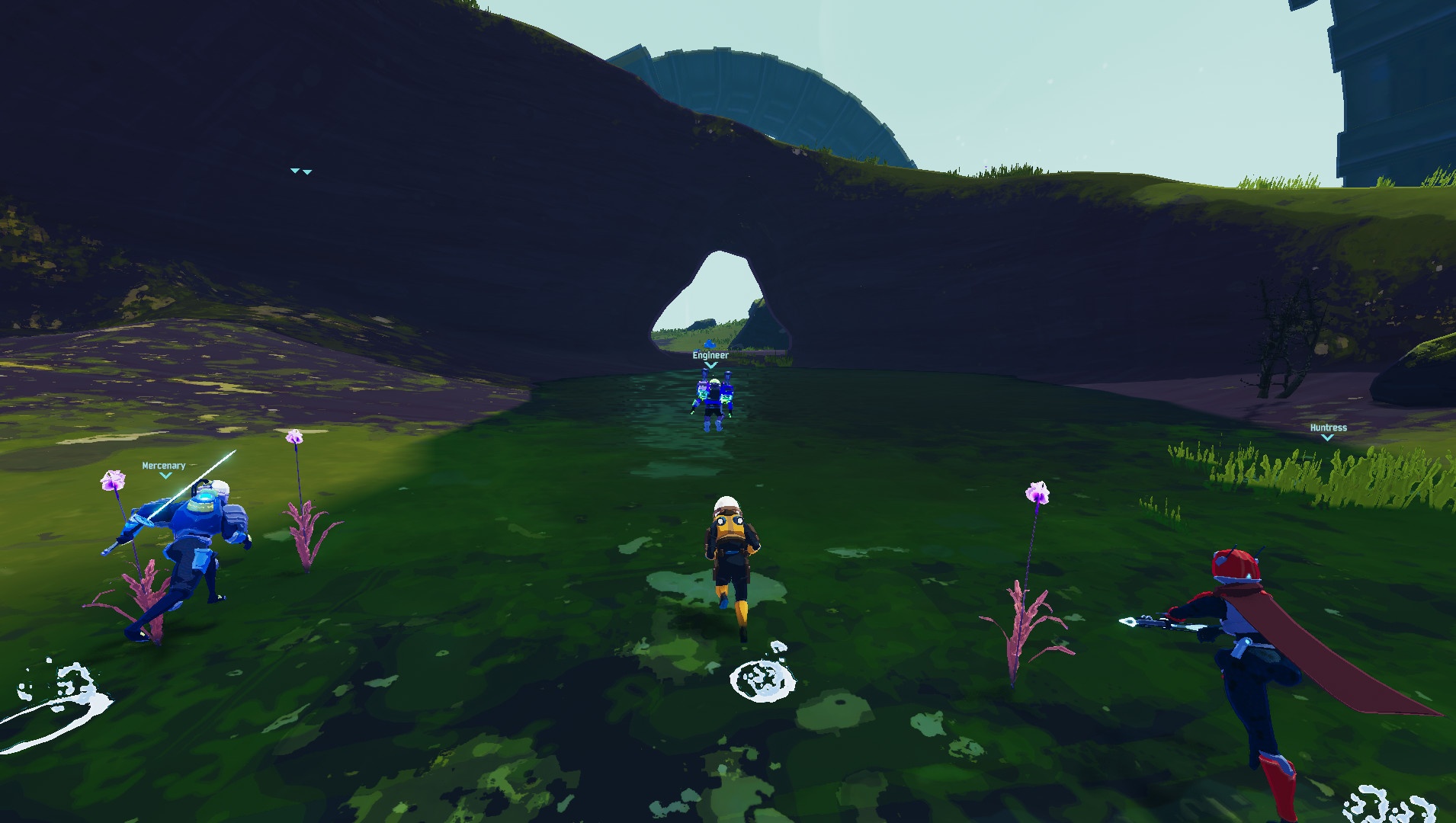 However, along with the fact that this sequel has some new gear, classes and enemies mixed in, the biggest difference is that Risk of Rain 2 is fully three-dimensional, a far cry from the 2D pixel goodness of the original. This creates a whole new approach to the game, and it works out surprisingly well. With the realms and enemies being accessible from all sides, players now can take bold new approaches in sniping and survival. For example, in one particular level, I was able to run up some fallen stone pillars and look down on the mayhem, using a 30 second charge item to literally summon lightning and fry foes from a distance. This was pretty awesome, showcasing what kind of alternative gaming you can do in a positive way. However, after a couple of minutes of this, enemies ran up after me, I jumped down, sustained massive fall damage, tried to run backwards away from things and ran smack into a massive stone golem, which promptly murdered me. And there comes the rub and the difficulty: 2D means seeing everything that’s happening directly around you. 3D means having to be keenly aware of your environment and being able to adjust on the fly, and fast.

Initial impressions of the game lead me to think that Risk of Rain 2 can be substantially more successful than the original for a number of reasons. Firstly, pixel art, as much as I love it, doesn’t always resonate with new school players, and I imagine a lot of people dismissed the crazy difficulty curve and insane number of replays that Risk of Rain contained merely on appearance. Risk of Rain 2 looks positively gorgeous and does a grand job of creating some exciting and gorgeous landscapes, especially the Wetland Aspect, which felt like a primeval swamp. I was NOT a huge fan of the Abyssal Depth, however, due to the whole “it’s dark and fiery and it feels like Hell and I’m in Hell” mentality that occurs shortly after arriving. Seriously, it’s a cavern full of fire, fire enemies, massive magma worms and just pure, unadulterated pain. If you can get past here solo, good on you, you’re a far better gamer than I. Well, if you don’t act a fool and remember to open as many chests as you can before jumping to the next level, that’ll probably help as well, but, silly me, I just wanted to go fast.

Going fast is where the whole idea of the risk and reward really comes into play. Sitting around and looting chests to get everything that you possibly can seems like a great idea, but remember that the clock is constantly, chronically, LOUDLY ticking away your doom, and there’s not a lot you can do about it. Sure, running off to the next level as soon as possible might keep the baddies at bay, but what about what’s chilling in that chest right over there? What if it’s the ability to summon a swarm of drones to help you out, or a teleporter that’ll get you out of sticky spots with your head attached? But these things cost money, so you’ll need to keep letting enemies spawn and taking them out, watching as it rolls over from IMPOSSIBLE to I SEE YOU and eventually a neverending scroll of HAHAHAHAHAHA etc. Once the game turns the corner and becomes a bloodbath, there’s little you can do, so make sure that you are geared up. Either plan to run forever or plan to be your own personal tank. There’s no middle ground.

Additionally, this is a title where, despite the fun and excitement of multiplayer, you’ll definitely want to put in time in the solo mode to get your bearings. You can often get a better feel for what some items and weapons do if you’re afforded time to attempt them yourself and not wait for the leftovers dropped by someone else. I found a damn ukulele at one point and had no idea the implications until I noticed that it did arced lightning damage to foes near the ones I was targeting. Doubt I would have had time to process that in a group match. Also, you’ll want to try and unlock additional classes and characters which I *think* can only be done by getting through the funk alone. I got to something like the seventh stage in multiplayer (five stages that then loop back around with bigger and badder enemies) but didn’t see a single character appear until I was able to get through the third stage all on my lonesome. I was shockingly proud, and damn did my hand hurt. I forget how tough it can be to WASD through long form gaming, though a controller could theoretically suffice. I just don’t have a good one for my PC at the moment. 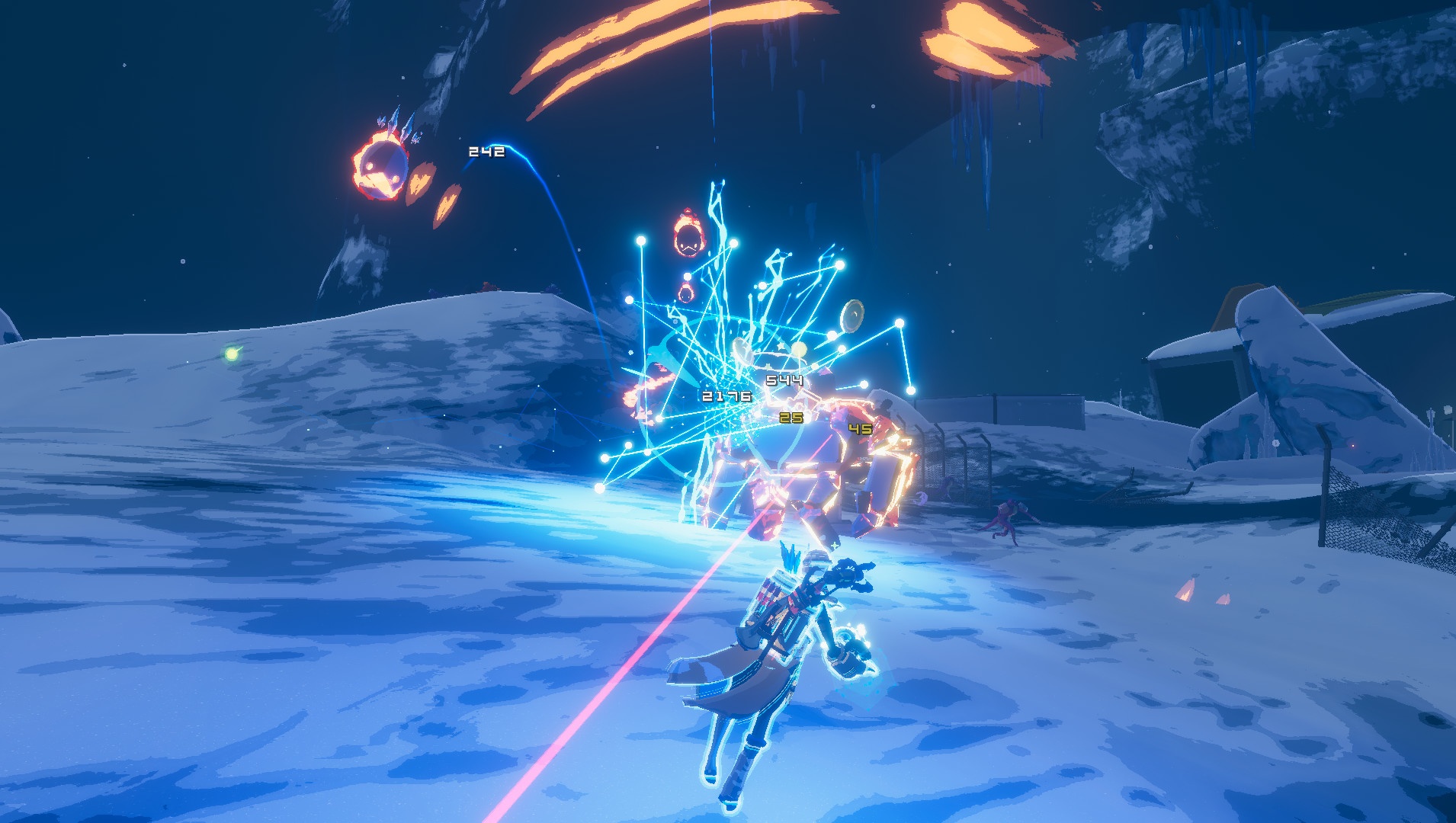 This review is being written as I watch my fellow squad mates get bounced around the screen by an absurd number of enemies. Oh, don’t worry, I’m not screwing off and leaving them to die by my own volition. No, I got killed about six seconds after landing on this particular plane and have just had to watch as everything goes straight to hell. To their credit, I got paired up with a group of incredibly talented players who probably have a better setup than I. Wandering Vagrants and Beetle Queens haven’t really seemed to be a problem for them, and I’m in awe at what they can do when they successfully gang up on something. I know they’re probably annoyed that I’m not carrying my weight, but they haven’t shown it or said anything. Once the match is over, I can probably find three more folks to bounce with, and that’s the greatest part about Risk of Rain 2 currently: the player base is HOT. There’s little to no waiting to get matched up, and there are people with seriously great skill to help carry you along if you end up getting splattered time after time.

Risk of Rain 2 is still very much in early access, but hot damn is it promising. I’m hoping that future updates include a map system so that people can get oriented a bit faster and not run in loops when the portal is just beyond their reach. Then again, because of the teamwork that multiplayer provides, that might not happen, and that would be okay in a group setting. The game currently runs magnificently on a processor that’s eight years old and a video card that clocks in at 1GB, so players should have no problems performing even in 3D. The music leaves a bit to be desired, but the soundscape overall does a magnificent job of creating ambience and cluing you in when there’s something big and deadly just out of sight. Risk of Rain 2 should be kept in any player’s mind for either immediate or future purchase, and I would vote now. Get in while the fanbase is jumping and go see some crazy, Furi-style swordplay from great players. Oh, and become one yourself, but no pressure.

The progressively punishing roguelike is back, with a new 3D approach to turn players on their heads; the excitement is palpable for new and old players alike.