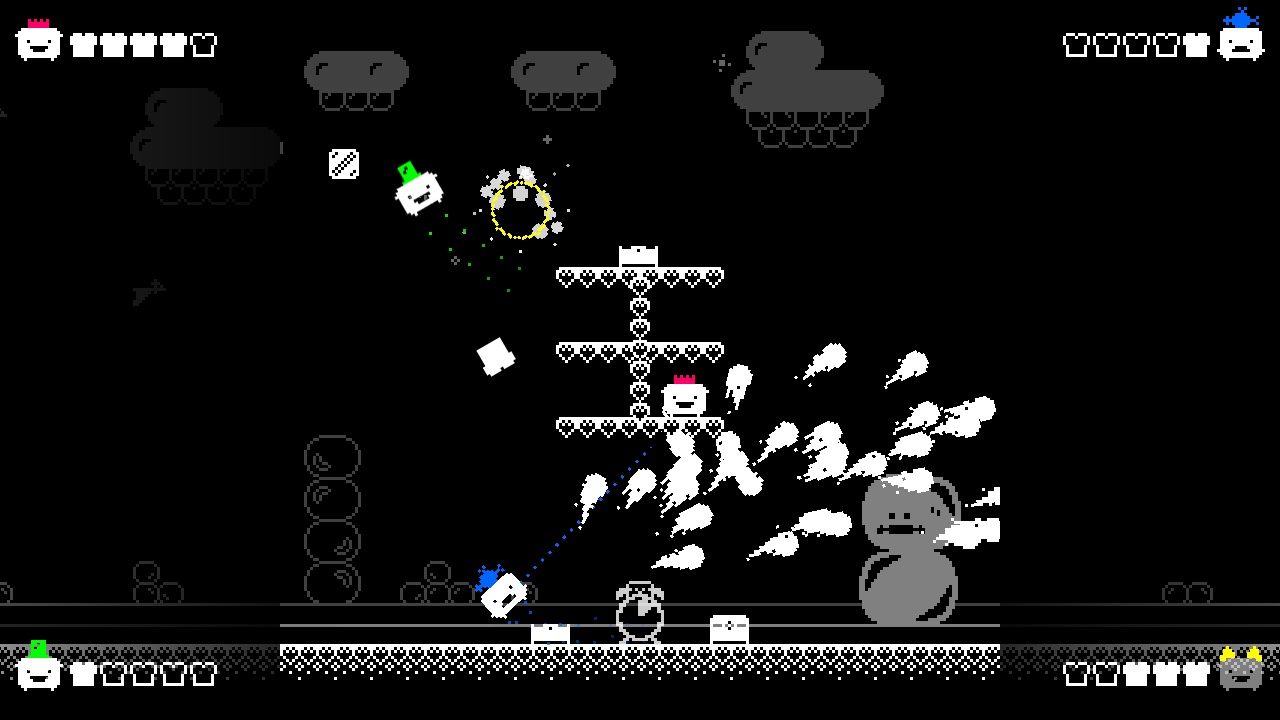 When it comes to releasing console versions of games already in existence elsewhere, one of three things need to present. One, it needs to be a game so famous and exceptional that there needs to be a demand for it that drives the developers to put it out no matter what. Two, it needs to be such a cult classic with such a massively loyal fan base that they’ll buy the game again, even if it gets released on a calculator. Three, it needs to bring something truly fun and unique, and possibly make a little extra effort to stand out on the console onto which it’s porting. For Force of Habit, a great band of developers and publishers, their game, Toast Time, is a delightful little dabbing of all three elements. I’ve always loved it on my computer, and, now, Toast Time: Smash Up!, the console release, brings something exciting for everyone in this Nintendo Switch edition.

Toast Time is an action arcade game based all around a little robot named TERRY, which is an acronym for Toast-Ejecting Recoil & Reload System. As it turns out, some awful inter-dimensional aliens have searched far and wide for free time, which is sparse and rare wherever they hail from. They’ve found it here, in our dimension, and pan to consume it all and if there’s anything more relaxing on a Monday morning, it’s enjoying some buttered toast being fired at you at several hundred meters per second. That’s right, TERRY is here to protect the free time with high velocity breads and tactical precision. After all, what else is a toaster good for other than destroying beasties from another world?

As you might’ve able to tell from my description and the wonderful screenshots that you’ve already laid eyes on, Toast Time: Smash Up! is all about the arcade shooting experience with a lot of angular consideration being put in. Each level in the solo player mission tasks you to defend your clock (which represents your free time) from aliens that attack from the sky, the ground and everywhere in-between. TERRY can launch toast in any direction he can see, and is able to take out most little critters with a single shot. The only problem is the whole “recoil” in TERRY’s name, which causes it to fly in a re-percussive direction. You can effectively freeze in space to help line up a shot, but you will automatically fly free after you loosen your yeasty ammunition. Additionally, you can hold down the freeze button whilst shooting, but it will, eventually, unstick you from the air. The best way to do things is to purposely release yourself before you get shook loose, so that way you have more control over your destiny. 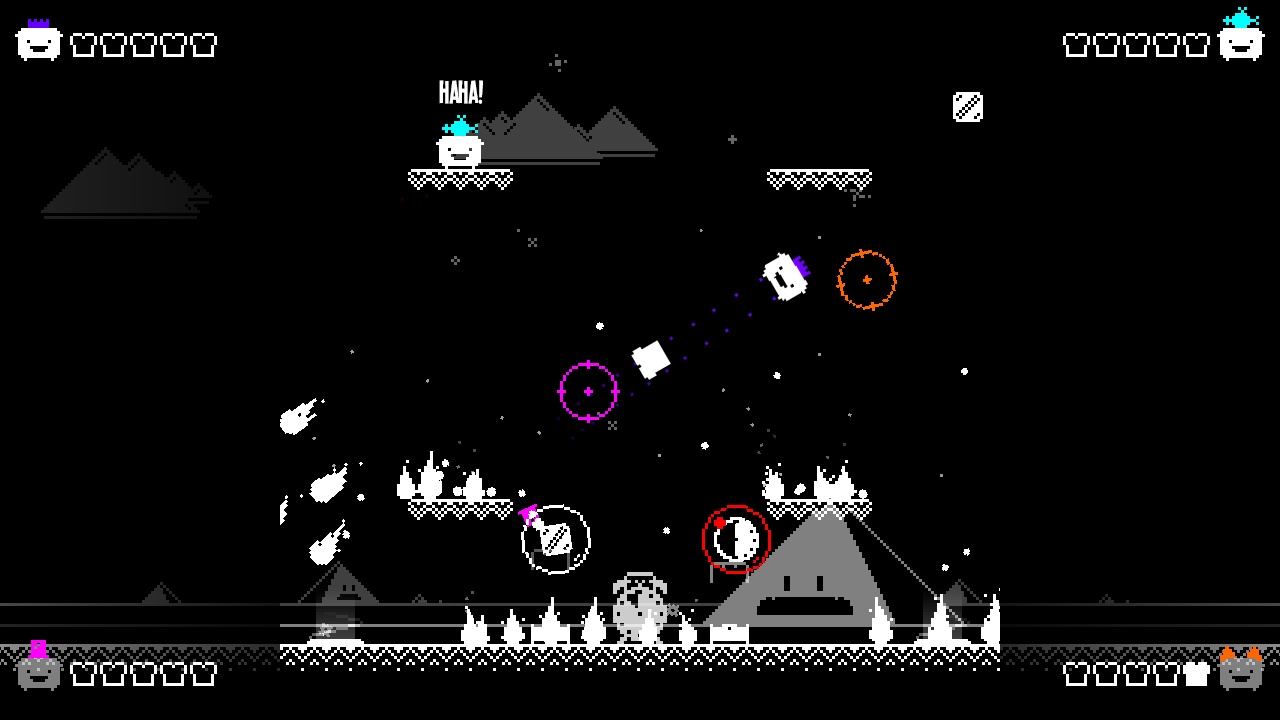 In terms of simple game execution, Toast Time is simply fabulous in making something easy so hard and so satisfying in the same swing. TERRY is a delightful hero, bouncing about merrily and utterly determined to protect his clock and make free time safe for everyone. The shot trajectory of the original bread that you possess is, well, a bit slow, but it gets the job done and, on levels that ask of it, can be more than enough to take care of everything. As you destroy crates that keep appearing in the different levels, though, more and more additional weapons get unlocked for TERRY to access, like baguette cannon shots and other delightful, breads destruction. It captures one of the greatest elements of another great pixel shooter, Super Crate Box, and does so with the added benefit of bread. You might think that you totally get and understand the how-to of making the game work, but, even as early as the fifth missions, you realize the complexity of accomplishing your mission while still getting a high score.

That’s because Toast Time: Smash Up! isn’t simply content to just line up targets and call it a day. Instead, there’s a variety of elements that come into play. Some stages ask that you use a limited number of shots, which changes the dynamic incredibly fast. You need to line up combos with enemies that aren’t willing to simply sit down and wait for you to shoot them, and, oh yea, they’re hardly a one-and-done type of enemy. Floaters, walkers, runners, jumpers, you get all kinds across the 40+ single player missions, and they all are dead set on getting your clock. Plus, if you burn through the missions quickly, go ahead and take a run at survival mode: your thumbs are going to go numb before you release it.

The “Smash Up!” part of Toast Time comes in with the new multiplayer deathmatch/brawl setup, which is something that’s certainly amusing enough but not necessarily enough to sell the experience. Basically, it’s one shot kills, and you gotta flop around in all directions in order to find your friends and bread them in the face. The level designs for the deathmatches make it so there isn’t going to be any fast,instantaneous rounds that come and go: as long as everyone has a controller connected, it’ll take a couple of seconds to get coordinated enough to even attempt a shot. This is definitely falling into that category of “easy to learn, hard to master,” simply because the controls translate very well into a single JoyCon. That’s kind of a gold standard for a good multiplayer game on the Switch is if it can work on one of the rectangles, and, sure enough, it’s damn good here. My kids were able to get the concept fairly fast, but actually being good at it is another problem entirely. Not gonna brag, but I totally kicked my seven-year old’s butt at a game that requires a rudimentary understanding of geometry and physics. Parenting! 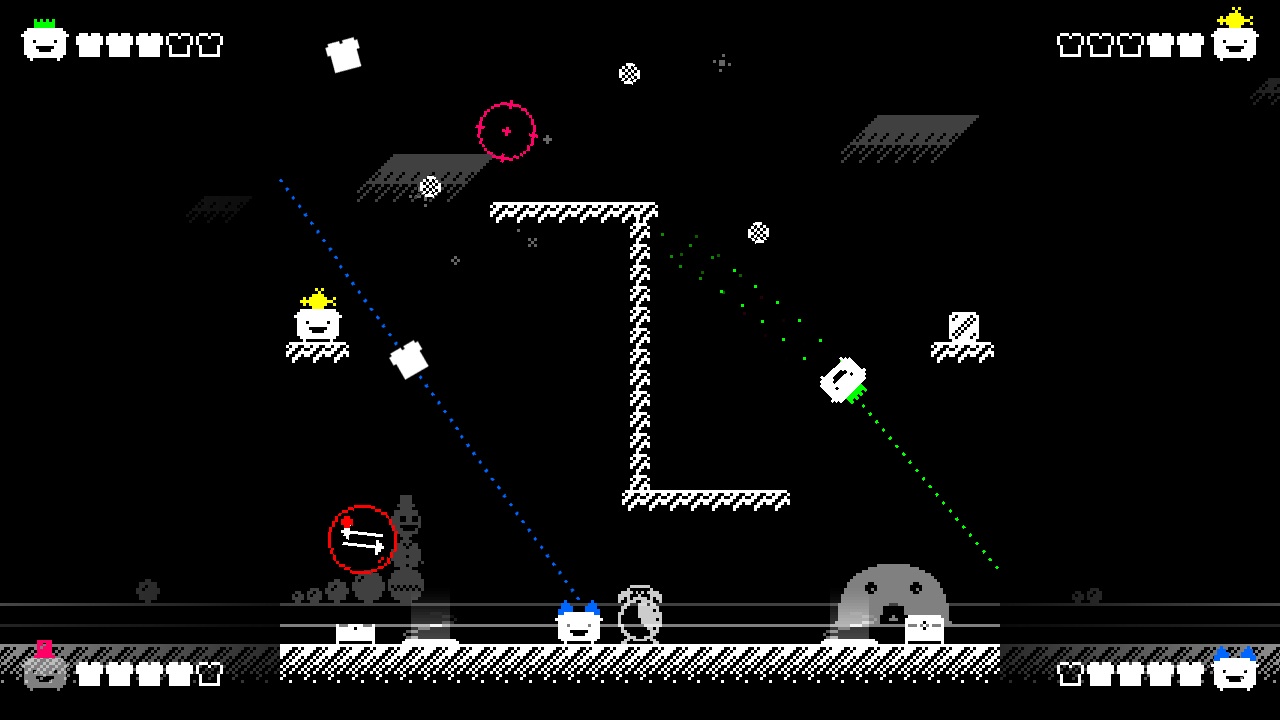 The presentation of Toast Time: Smash Up! is what ultimately sells the game all the way through on the Switch. Like so many great retro pixel games that have come out recently (Save Me, Mr. Tako! comes to mind immediately), the ability to change around the color palette and style gives some wonderful versatility in presentation and design. The sound is delightfully upbeat, chiptuned and ready for all the most intrepid would-be toasters to make a difference. As a personal victory, this is a fantastic use of the HD Rumble aspect, giving different tones and good vibrations to all elements of the game. Far too often recently, games just use traditional rumble, which is both physically unpleasant and honestly noisy, because the rumble of the JoyCons can actually be pretty damn intense. In comparison, the HD use in Toast Time is elegant and beautiful, and it’s clear that Force of Habit took time to get the vibes right.

All in all, Toast Time: Smash Up! is a joy to play for the Switch. There’s kind of a strange take on the game by the devs putting “esport genre” in the description, simply because I can’t see that becoming a huge pull, but hey, weirder things have become competitive victories. Toast Time is still incredibly fun, visually provoking and can be played quickly, in short spurts or long sagas. It’s quite worthwhile, and I fully recommend giving it a go if you’re looking for something ridiculous to enjoy either alone or with a friend. A friend who will grow to hate you for shooting them with bread.

Were you expecting to see the words “bread” and “deathmatch” in one sentence today?