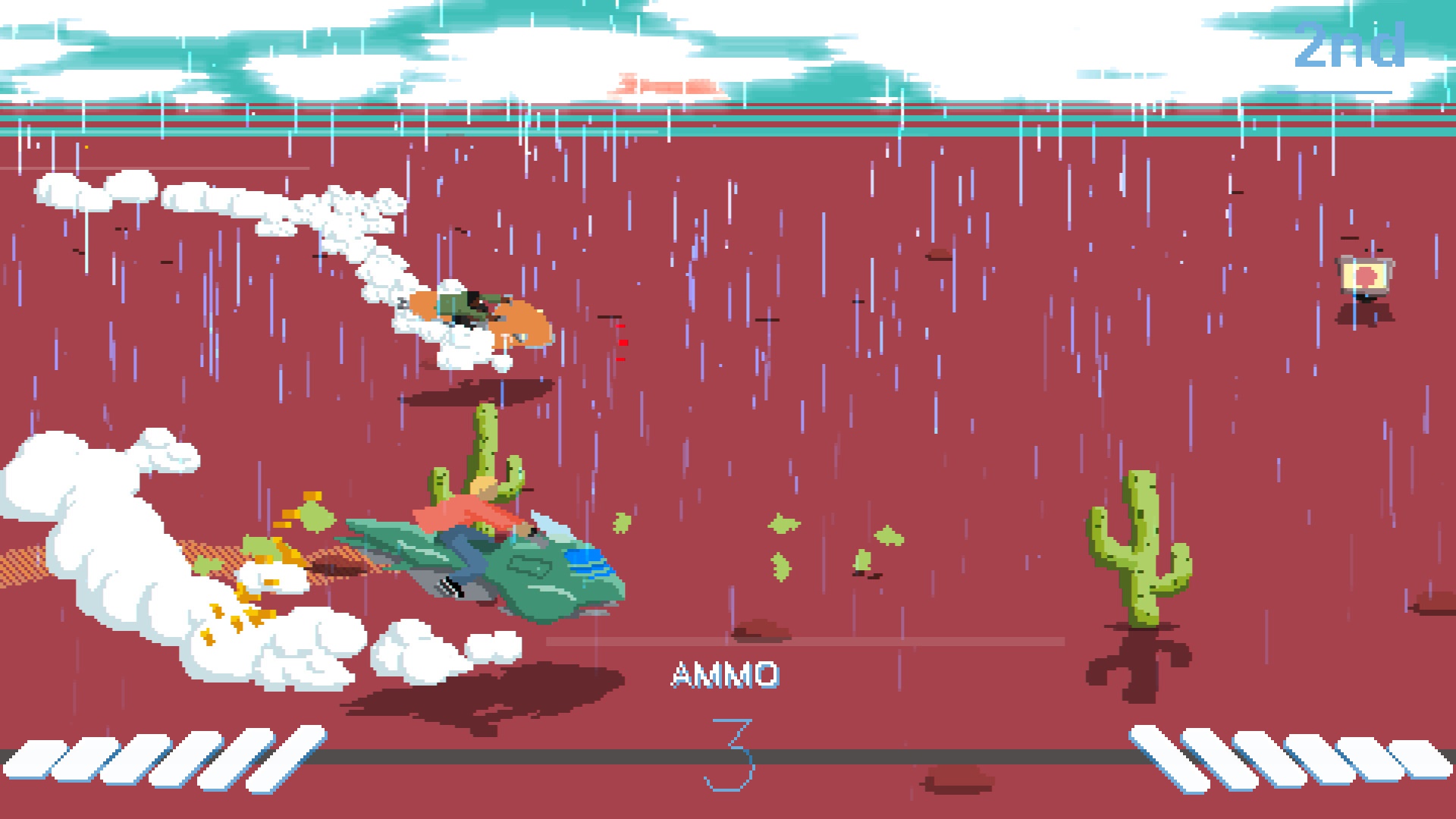 One thing that was really missing from sci-fi stories and dystopian futures in books from the 60s and 70s was a grounded sense of realism. In everything from Clarke to Dick, there was a detachment in which almost everything seemed to change. Not just the technology, but the attitudes of people, impacts of consequences…hell, even the affluent seemed to be a different kind of rich or greedy, which always struck me as odd (I love Flow My Tears, the Policeman Said, but man is Taverner a weird dude). So when the 80s rolled around and Gibson showed us that we could have all the tech in the world and people were still miserable sods, it made things seem attainable. When you pull back the veil and reveal that, ta da, people still have some semblance of relatability in the far-flung future, I’m right on board. Which is probably why I love the hell out of Oscar Brittain’s Desert Child.

In the far-flung future, the Earth is totally screwed. Seriously, the whole planet is mostly lifeless, turns out we’ve been abusing it for centuries and now it doesn’t look good. You play a character who may or may not be an orphan or something, it doesn’t matter, but the world is in rough shape. You’ve got three passions in life: your bike, your food, and not being stuck on a planet that’s going to totally give out any day now. Mars is the hot spot now, and we can all assume that humanity has learned nothing and we’ll probably screw Mars in a few millennia as well. But right now it’s a paradise in comparison, and, after a quick run in with a cool biker chick, you decide to get a ticket and get to the fourth rock from the sun. And here on Mars, things are…a lot like on Earth. So now you gotta save up some money to participate in the biggest Grand Prix bike race ever, because surely winning that will give you some kind of meaning. Okay, probably not, but hey, it’s something to do.

Desert Child is an RPG in the purest sense because you do NOT have a clear direction on what you’re supposed to do. After you do a couple of initial races to understand how the game works and what to do, you’re off to Mars to get your life on track. I wasn’t kidding: saving up ten thousand dollars to get into the Grand Prix is your big target, and that’s going to take a while with what you’ve got on hand. You can simply race against people over and over, gaining credibility, winning some prize money and repairing your bike and filling your stomach in the meanwhile. You can get an honest job delivering pizza, herding kangaroos, or even doing some weapon testing. You might decide to become Dog the Space Mullet and bounty hunt some felons, including one that looks suspiciously like Fry from Futurama. Or you can do what we all would probably do and start in on some seriously shady activities because they pay the best. Naturally, the police can and will take notice, so you gotta really watch yourself… 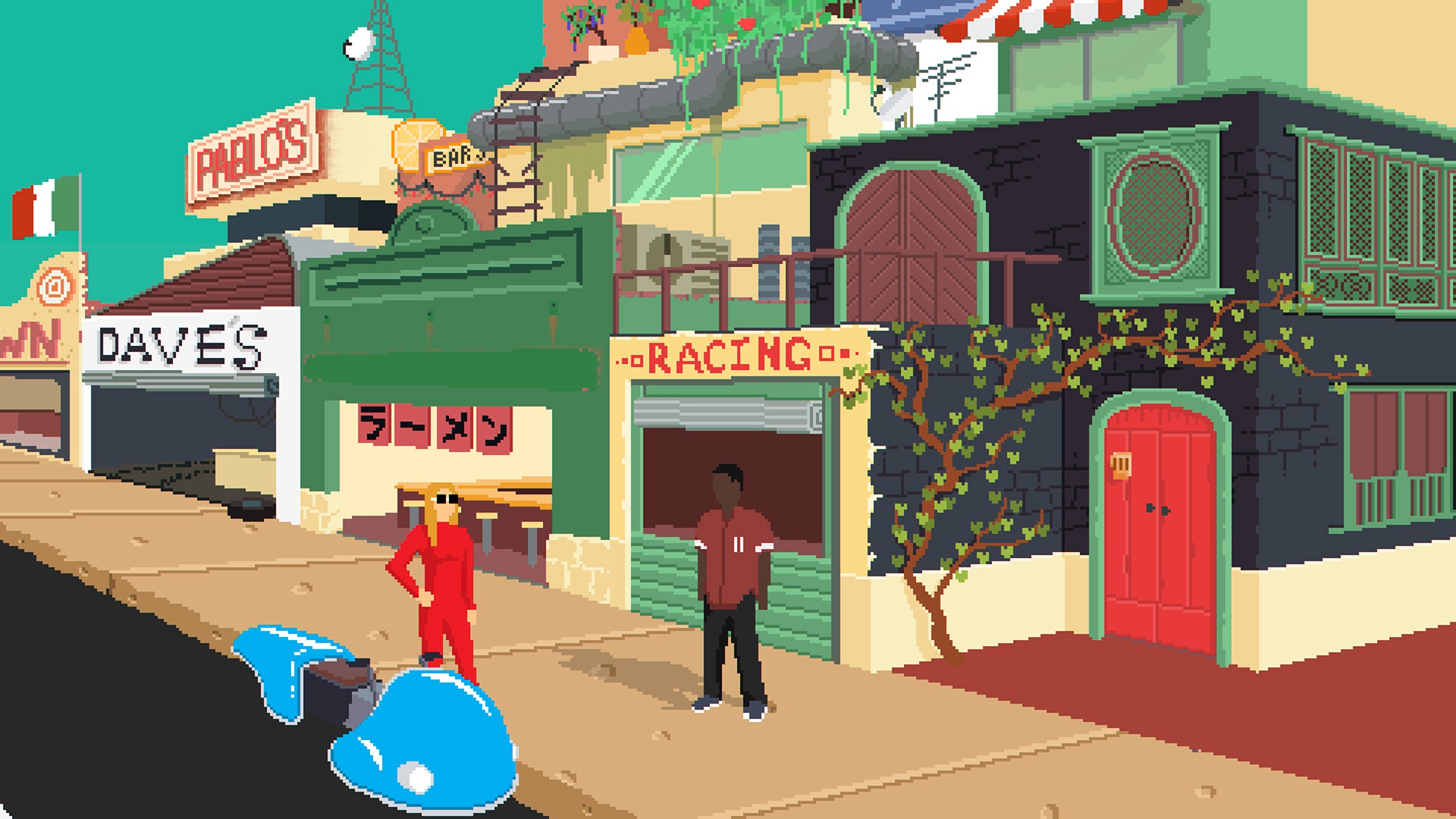 If you’re interested in low fidelity pixel pieces, your in luck, as Desert Child will have you covered. It’s really cool, because I feel that pixel art tends to ride a line: you either want to go full retro mode and emulate the games that were forced to use this style (since nothing else existed), or you want to go super pixel dense and make people sit up and take notice that you made this magnificent mural one square at a time. Desert Child tends to go more in the Superbrothers direction, blurring facial features and keeping body types and persons a bit more baseline than you’d expect. This actually creates the PERFECT atmosphere for what the game is trying to achieve. You’re able to drink in the general idea of what Mars is like as a terraformed future colony, observing the expansive ocean, the narrow alleyways and the crowded marketplace, not to mention the Canals (my personal favorite hangout). At the same time, there’s nothing that’s set in stone enough to make you sit up and take notice in a big way. You basically say “Yea, here I am, in a pizzeria on Mars,” but there’s no overwhelming awe to it. You’re having a good time, you’re definitely not where you started, but there’s almost an important disappointment that lingers. You’ve left Earth, you’re thousands of miles away on Mars, and you’re eating the same ramen. I especially love that we make sure things like the fish you eat, the parts you find and the items you pick up get the full treatment in looking fine (seriously, that pizza looks good), but people are just vague suggestions. Brilliant.

This is underscored with a soundtrack that captures a rugged future in the best possible way. Laden with a lot of mellow, funky tracks and some notable contributions (shout out to Random for two different tracks), you end up putting yourself in the shoes of the Rider in a big way. You’re stomping the pavement, looking for a job to run or a bike part to steal while bumping to some beats that remind you you’re still out of luck as of right now. You check your HUD to see your bank account is low, your notoriety is rising, you’re pretty  hungry and there’s not enough time in the day to get it all done. All against a sick track called Man, How Wicked Were the 90s? Death Trap, Ice Cream Sandwich, Girlfriend Material…there’s a ton of great music here, and it really helps to better paint the picture of the world you’re living in and what you’re trying to accomplish.

Now, Desert Child certainly isn’t a JRPG, where the story line is going to drag you along, kicking and screaming, to keep up with the plot and find out what the next big twist will be when some dude in blue hair decides to destroy the sun or something. You gotta get there yourself. You go to Mars because some chick recommended it. Great. What’re you gonna do now? You can’t fast teleport anywhere, you don’t get to stock up on rations to just eat whenever you want. You can buy new parts for your bike (or steal them, my favorite mini game ever), but you still gotta make them fit on your panel. You can’t just duct tape everything you find and end up with a Masamune, you gotta Tetris that stuff on and make sure it’s all connecting to the power grid, and you gotta get more power cells through doing a damn job. Win a race if you’re cocky, sure, that’ll get you a bit of cash. Throw a race if you can, but don’t be surprised if you accidentally win and wind up in trouble. Take some time to do bounty hunting as long as you got the right weapon, or even go test out this new experimental gun for fun and profit. There are so many opportunities and choices to live your life right on Mars no matter what you wanna do, but you have to do it. There doesn’t appear to be any sort of penalty for just eating McNoodles every single day, but I still took the time and treated myself to variety once in a while. Hell, I like supporting that pizzaria: it’s a damn fine dish, the delivery quests are fun, and there’s an AWESOME track about pizza that you can only hear during these missions. Plus I got to live like the Deliverator for a moment, even without a samurai sword. 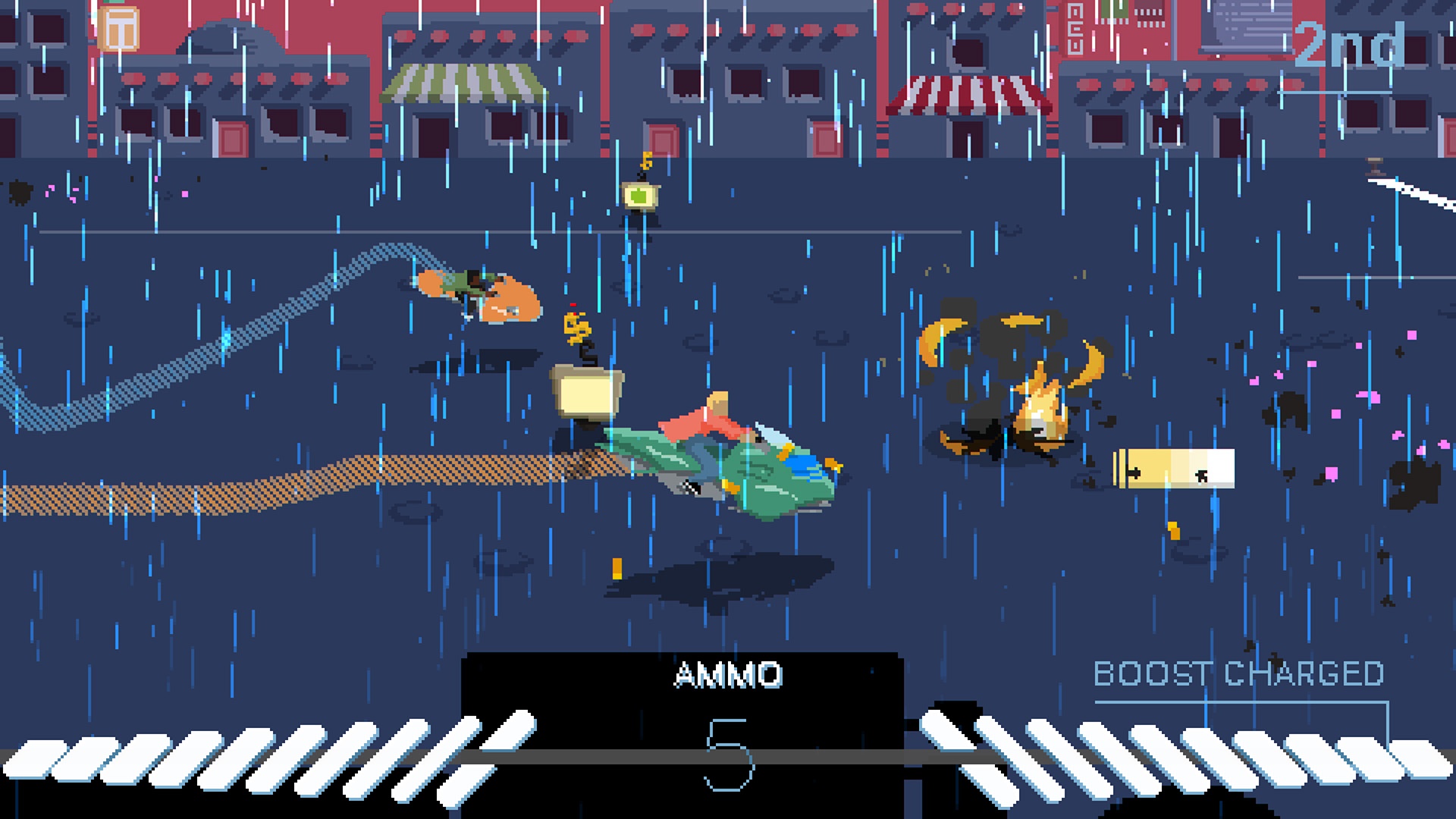 Almost all of the game is going to be spent racing in one way or another, and it’s a good thing that Desert Child handles this mechanic well. You speed along on your bike at a fixed rate, with the option to boost, shoot or side-slam as you go. As a great racer, you learn how to conserve both your ammo and your boosts to make them work for YOU. You can shoot your opponent and slow them down, but this only really matters for bounty hunting missions: let the terrain take care of opponents on regular races. Learn to understand which drones refill your boost, which ones drop a ton of cash, and which ones just want to mess you up. The races can be over in a moment, but everything for the next leg relies on how well you do here. Be careful: one thing I noticed is that you can get stuck in the top or the bottom of the screen and need to boost to break free. It’s a minor bug, but if you boost into a permitted limit, you need to boost out, otherwise you’ll just scroll there till the race is over and you probably lose. And the racing is also one of the few places where you can do some two player action, probably to shut up your friend who’s watching and giving you grief over all the cash bots that you missed and how they could do a better game. No you couldn’t, Mike, you suck and there’s a reason you play as baby Luigi in Mario Kart.

What you really get from Desert Child is a story: a story of a disenfranchised dude who decides that he can start over again on Mars, and, spoiler, it’s not just an instant success story. Desert Child is captivating in this sense, because now you’re living someone else’s life, but it gets better, it gets more interesting, you continue to get more excited about what you’re doing and where it could go. Three percent interest doesn’t sound like a lot, but when you’re getting money from nothing just for having cash in the bank, you feel like an adult…ON MARS. Of course, now you’re less inclined to rob the bank because you don’t want to damage where you’re keeping your cash, but can you just walk away from the crime life? That bike on the bridge is just begging for you to steal a piece off of it, why would you deny yourself that free, easy money? Because getting arrested is expensive, but maybe you’ll pay the man down on Wireless Hills to keep the cops off you for a few days.

You might be mistaken and see that Desert Child is free to play on itch.io, and you should know that’s only a demo and a much, much smaller version of this game. Desert Child is 100% worth the price tag as long as you know exactly what you’re getting. You’re in a role-playing game, where your role leads you towards a future that could be great but might just be more of the same. Do you think everything is gonna change once you have the cash for the Grand Prix? Is that going to be the ending you think you deserve, or is it just another step along the way for your path somewhere else? Desert Child is an excellent experience, but just remember the words of Run the Jewels: it ain’t all it’s cracked up to be/the hovercraft’s cool, but the air’s so putrid.

Desert Child just screamed past the finish line to become one of my all time favorite indie games.