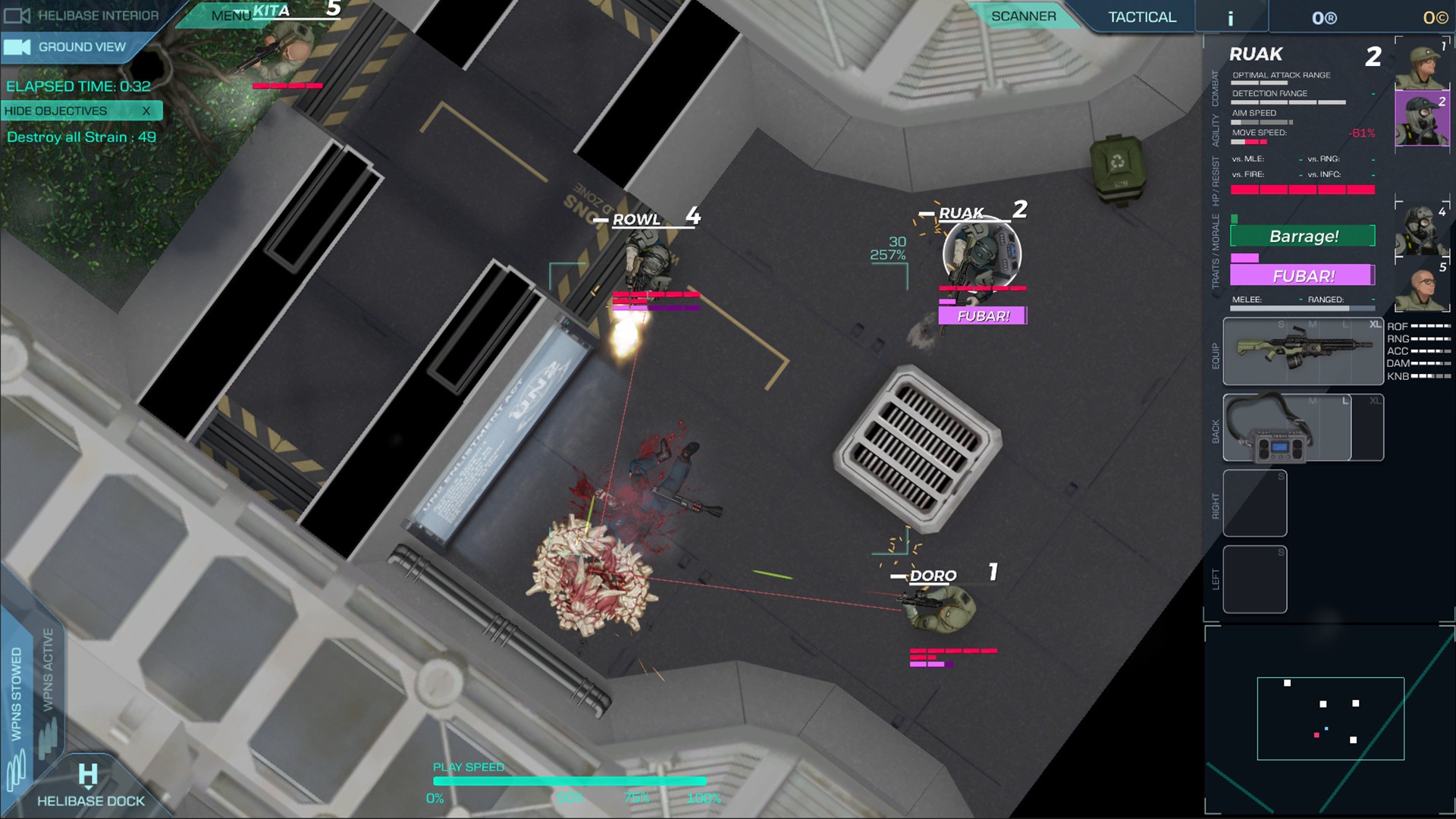 Strain Tactics is a real-time tactical strategy game in which you command a squad of up to 5 members through a myriad of missions in an attempt to cleanse Earth of an alien infestation.

When I first saw the trailer for Strain Tactics, the first thing that came to my head was Infested Planet, an indie game whose premise is very similar, but has a stronger focus on base building and gradually capturing sections of the map. On the other hand, Strain Tactics focuses more on customization and player interaction in confrontations, besides the squad management aspect.

Sometime in the future, on an expedition to Neptune, UN forces come across an unknown biological threat that quickly began spreading and consuming living organisms, until it eventually finds its way to Earth aboard a spaceship. However, fairly early on the game, you figure out that you were actually part of the squad that tried to destroy that very same spaceship, but you were unlucky that some pieces of the spacecraft remained intact and landed somewhere in the Pacific ocean. Luckily enough, Strain Tactics takes place in a time where human cloning is commonplace, especially for highly trained military individuals such as yourself, and this also comes up in the game in the form of a revival mechanic.

The game really makes you feel like you’re a powerful unit that is fighting their way against all odds, especially when you see a bunch of enemies coming out of cover and your units just keep decimating them. Sure, they will attack enemies on sight, but the ability to give orders to every squad member with a single press of a button, or individually, is really intuitive and easy to grasp, especially given the fact that you can pause the game at any time and plan your approach. 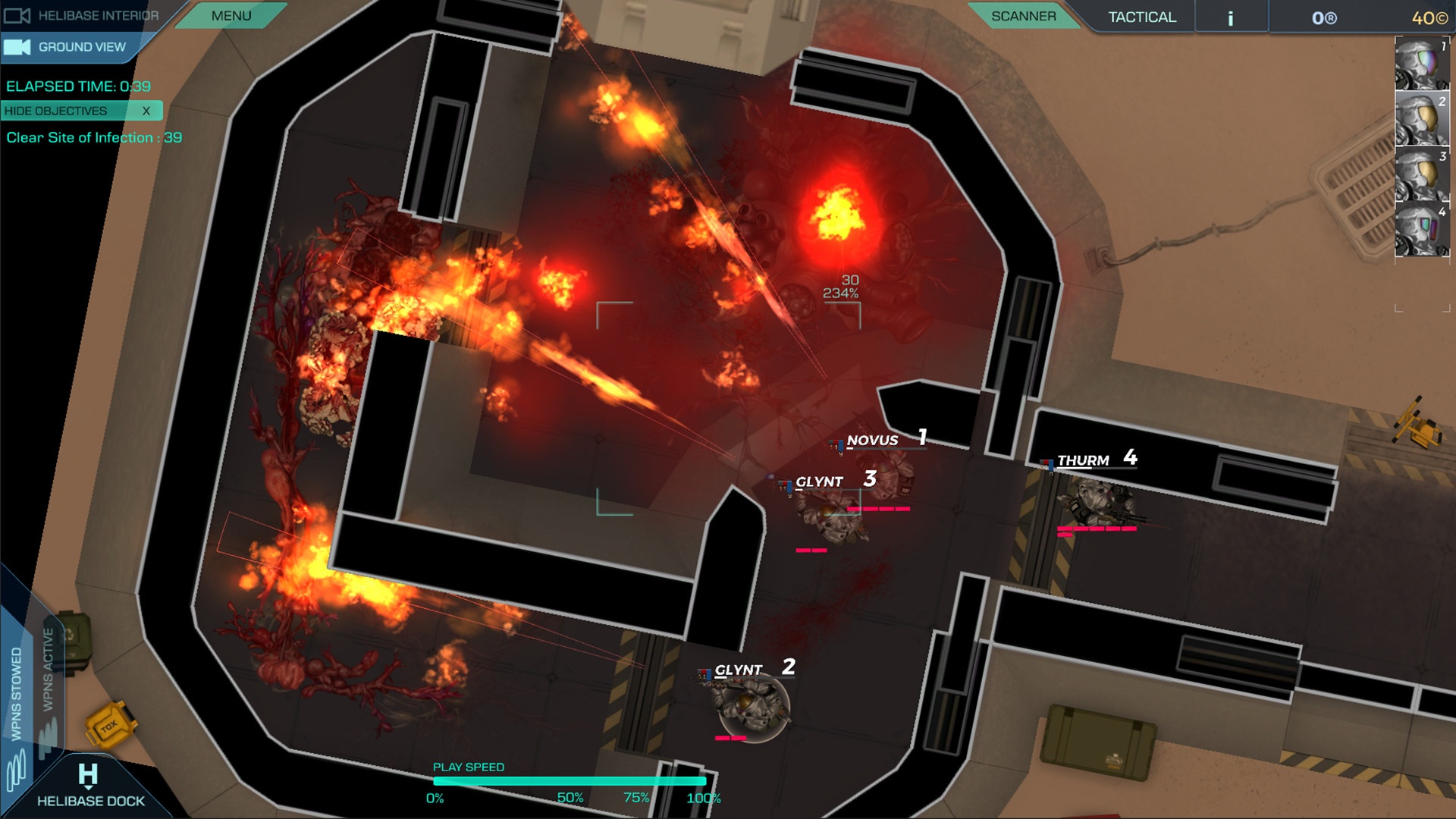 So you can see that, while Strain Tactics could easily be described as an RTS in some of its aspects, it would be wrong to just define it as one. The game also features inventory management, in the sense that each one of your units can carry a certain type of gear, depending on their function (e.g. combat engineer or medic), which can range from small firearms to heavy rifles, claymore mines, healing items, to even fruits, cigarettes and even adult magazines. These serve as a means to improve morale, which impacts how certain units might perform in chaotic situations, but you can also sell these items, or buy different ones, in the several stores that are available in your base.

Now, another thing that for me makes the whole gameplay dynamics a lot more engaging, is the fact that you have a mobile base in a helicopter, from where you watch your squad down below. This can be used to rain down ordinance on the infected waves, but it also brings another layer of strategy to the game, as you can drop and pick up your troops at any place that has enough room for at least one exit or entry point to the chopper.

The game features plenty of missions for you to indulge your infested slaying needs, and the more enemies you kill along the way, the more missions you’ll unlock. Curiously enough, since you’re part of an elite unit that is trying to stave off the strain advance on Earth’s safe territories, if you fail to kill a specific number of infected in each mission your base will be attacked once you return. While at first this didn’t seem to much of a hassle, later on, when you get to face ever-increasing waves of harder enemies, it’s recommended to take your time and make sure you don’t leave before eliminating as many enemies as possible. 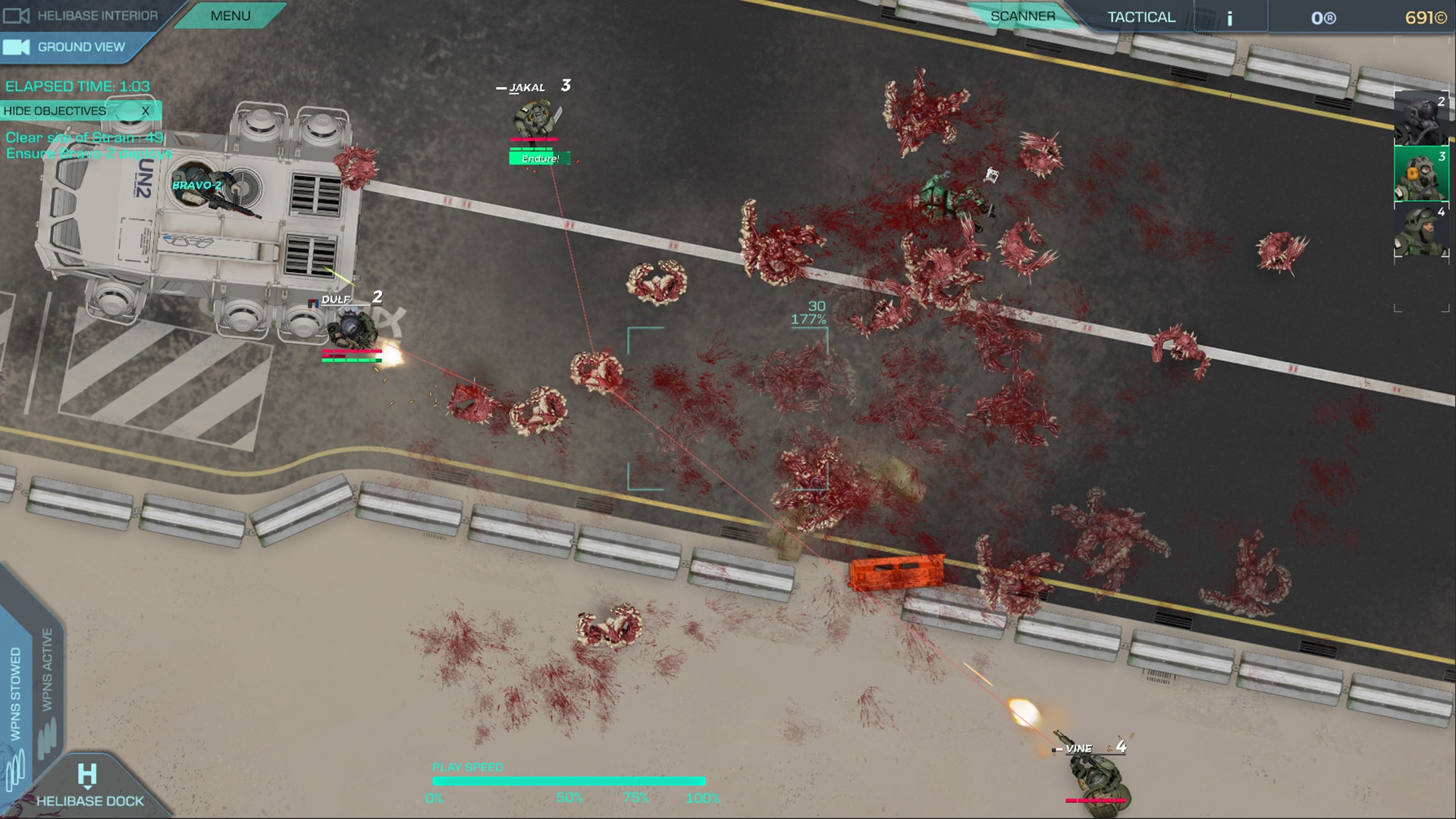 The whole premise of the game is based around the idea that you’ll most likely lose units sooner or later, most likely by getting killed in combat or getting infected, and this is where the idea of reviving, or cloning, your fallen soldiers comes into place. If you drag your soldier’s body bag to a cryo-vat, you can then revive them and have them instantly ready for battle.

Everything about the game sounds great, and despite its rather odd interface, that feels like it belongs in a mobile game, it’s surprisingly easy and intuitive to control your troops with the mouse. By quickly left clicking and dragging your mouse you’ll order them to follow the route you’ve drawn with your mouse, while simply right-clicking will issue a standard move order, through which each unit will follow the shortest route to the destination you’ve assigned them.

Overall, Strain Tactics offers a pleasant enough experience for me to recommend it, even though I feel that it is a bit pricey for what it offers. I haven’t beaten the game, but by looking at other people’s playtime on Steam, I assume that this has at least a couple of dozen of hours worth of content. With that said, the game is bound to get repetitive, so I don’t really recommend it for long play sessions. Even though it doesn’t really have an engaging narrative, this is a nice game to blow off some steam and destroy some aliens, and it’s pretty good at that.