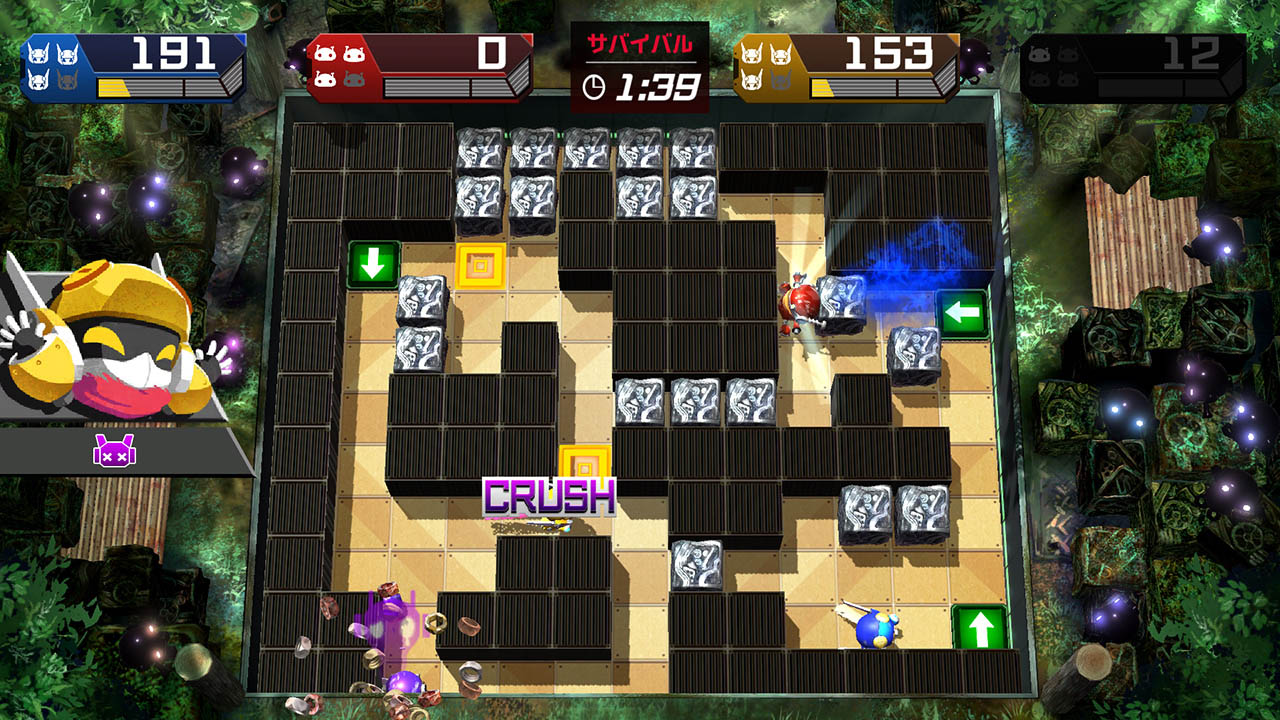 Scrap Rush is a single player and multiplayer action game developed by Acquire, where up to 4 players compete in short battles to collect the most scrap. The game is set on Planet Scrap, where robots compete by gathering junk, turning it into cubes, and then punching them to turn them into deadly projectiles that crush their enemies.

Scrap Rush has a similar gameplay style to the classic Bomberman games, with players moving around a grid based arena and trying to knock each other out. While Bomberman has a focus on simply blowing up all the other players and being the last one standing, Scrap Rush introduces a new twist. The arenas are filled with junk, which usually comes in the form of cubes. These cubes can be either pushed at other players to crush them, or the cubes can be destroyed, which will cause them to drop scrap. This scrap can then be used by the players to form cubes at will. Scrap is also used as points, with the player who holds the most scrap at the end of the battles being the winner. 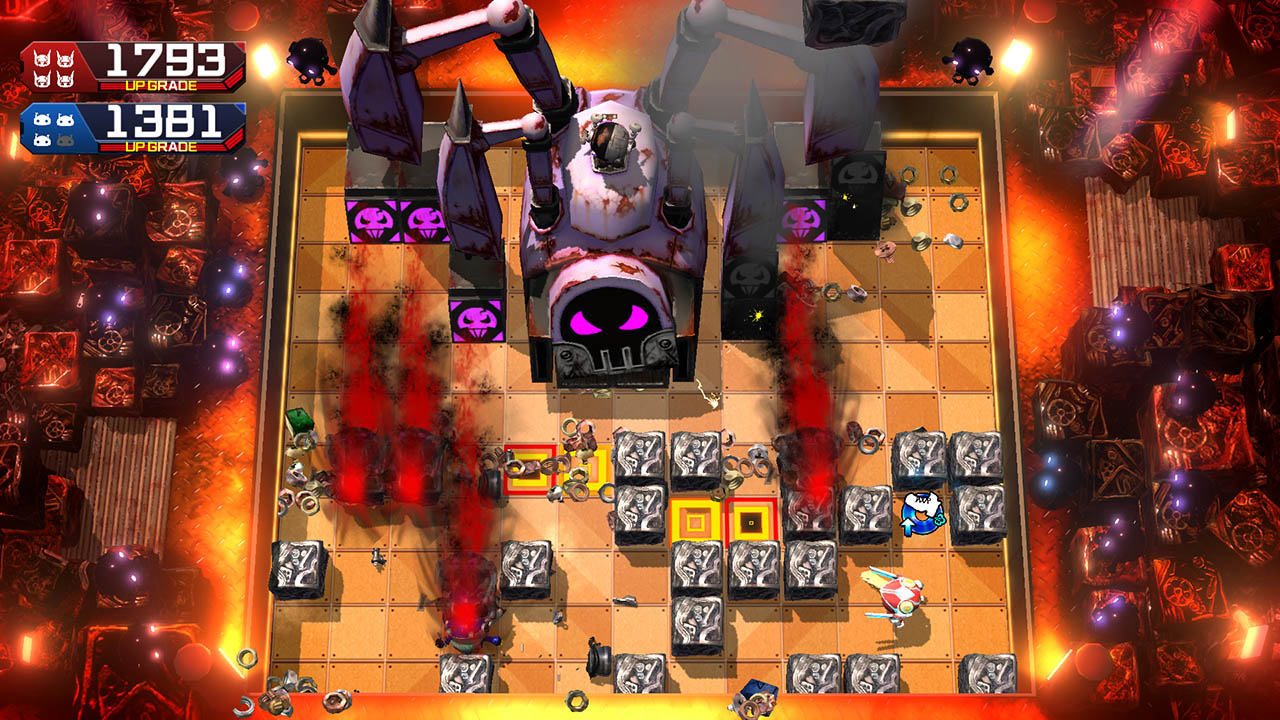 Scrap Rush features three main modes. Challenge mode tasks players with surviving through 10 stages, and can be played either solo or in co-op with friends. These stages make use of a variety of modes, including survival matches where you have to defeat your enemies a certain number of times, and point matches where to win you need to have more scrap than your opponents when the timer runs out. Battle mode is the multiplayer mode, where you can compete with your friends in survival matches, scrap battles, or point matches. Scrap battles are team matches where team work together to gather scrap and aim to have more than the rival team when time runs out. You can also be sneaky and steal scrap from the opponent team’s stash. Lastly, there is the Scrush mode. This is a single player mode where you have to survive through multiple waves of enemies, while destroying as many of them as possible. Each time you destroy an enemy, you gain points, and the goal is to achieve the highest score possible before you get crushed by an enemy.

There’s always a timer going during Scrap Rush’s battles, and as it gets close to running out, cubes will start to fall from the sky and pose a crushing hazard to players if they have one fall on them. However, these cubes also provide more opportunities to collect scrap as well as being weapons to be pushed at opponents. This final countdown in each battle can be fairly intense. What also adds to the intensity is the variety of power ups on offer. There’s a bunch of them that spawn during matches, including increased movement speed and increased strength.

Regardless of whether you win or lose, the amount of scrap you have at the end of each match will be added to your overall total. This scrap serves as a form of currency that can be used in the game’s shop, accessible from the main menu. You can buy new character colours, along with extra power ups and stages to play on. There’s a reasonable selection to choose from, and it helps to add some much needed variety to the gameplay. 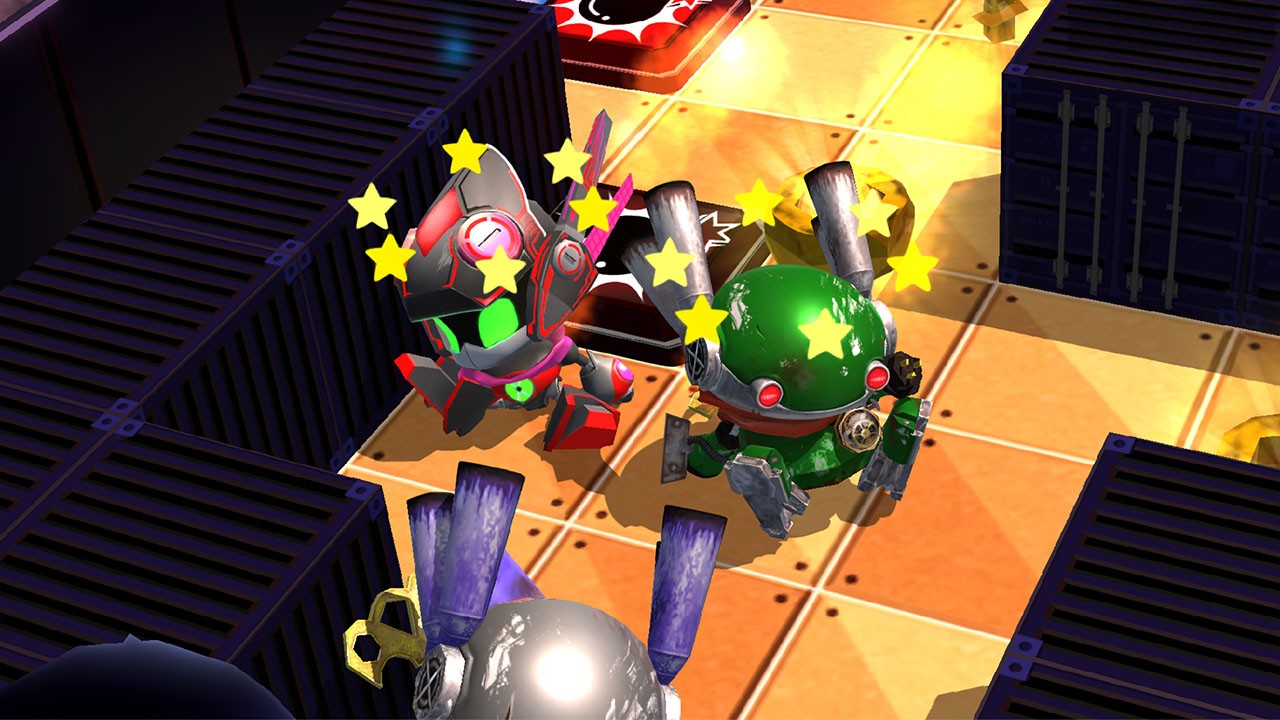 Scrap Rush is a fairly good looking game, and it plays very smoothly. Although the range of characters is small, they all look good and can be distinguished from each other clearly enough to avoid confusion during battles. Bits of scrap litter the stages and go flying when cubes are broken or enemies get crushed, and this makes for an interesting visual effect. The variety of stages is also quite reasonable, with a number of different hazards and obstacles to encounter. Sound effects have been put to good use in Scrap Rush, with the metallic sounds of scrap hitting various surfaces, and the cries of enemies as they get crushed to bits. The background music isn’t especially memorable, but it’s fast paced and well suited to an action game like this one.

Overall, Scrap Rush is a solid game, especially in the multiplayer and co-op modes. Much like the Bomberman games that it draws inspiration from, Scrap Rush makes for a great party game. This is due to its good level of replayability thanks to the often unpredictable and frenetic nature of its gameplay. It’s hard to go wrong with choosing a game like this as your next purchase, and Acquire have delivered a fresh take on an old formula here.

Scrap Rush is a solid game, especially in the multiplayer and co-op modes.