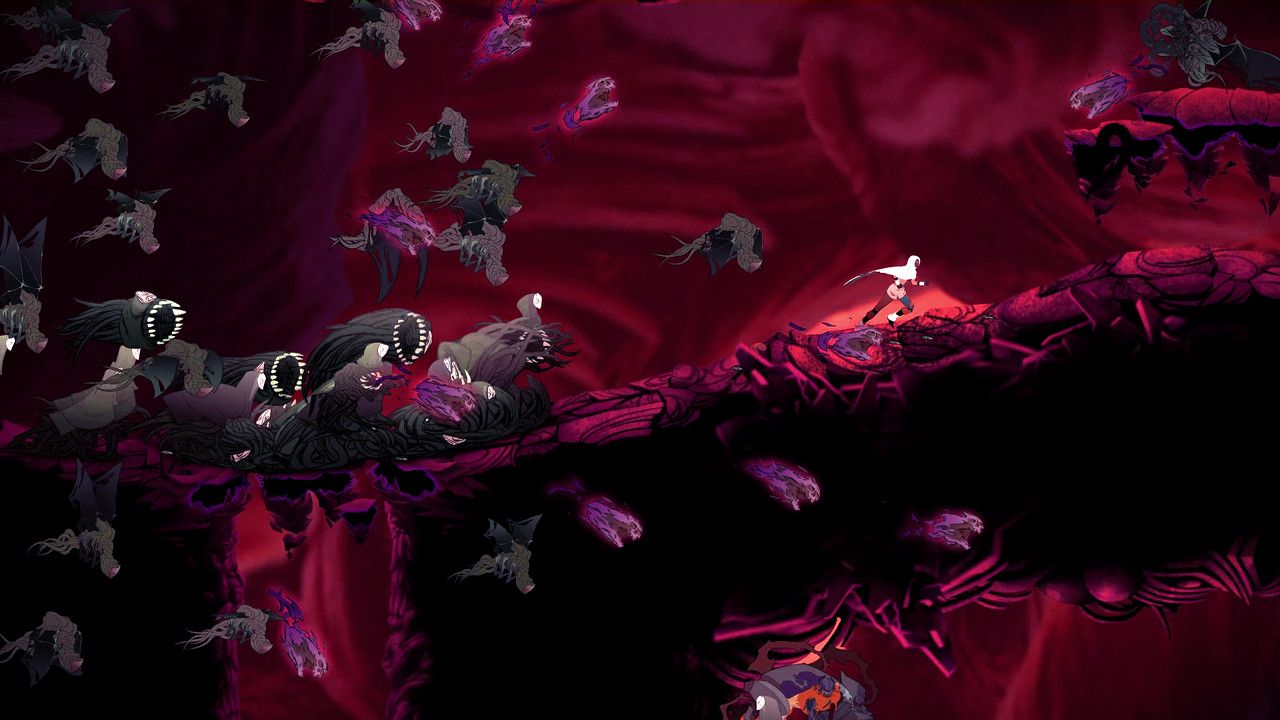 Absolute power corrupts absolutely is a popular phrase that we throw around when it comes to talking about bosses, leaders, politicians, and that kid who gets to choose teams for kickball. But it’s always used in a negative sense: basically, once you have the ability to control and bend the world to your will, whatever you choose to do is something nefarious and misbegotten, such as making sure I get picked last and know how terrible my fielding skills are viewed. Yet, for those people wielding the power, doesn’t it feel just awesome? The chance and the opportunity to do what you want, when you want it, and make the decisions that best shape the world you desire. This is the crux of gameplay inside Sundered: Eldritch Edition, and how you decide to spade out your humanity might affect the ending, but damn, it makes for a fun game in the meanwhile.

Eshe is a wanderer of the wasteland, trying to find some kind of purpose or reason to survive in a terrible future, when she is dragged down into a strange underworld by an unseen being. The being whispers into her ear, guiding her towards a force called the Shining Trapezohedron, which she then bonds with to begin her quest in this odd world. Turns out that she’s in the ruined remains of an old civilization that was torn apart by a failed ritual between two groups, the Eschaton (who are now cosmically horrific beasts) and the Valkyries (who are now angry, confused cyborgs). Eshe’s job is to find the Elder Shards that are scattered across three worlds, and then she has to decide what to do with them. The whispery, not-at-all-sinister voice wants her to fuse with them and corrupt her humanity in order to become more powerful and wipe out the Valkyries’ remaining forces. You can also destroy them in order to banish the darkness once and for all. It’s your call, and the different results drastically change how the game unfolds. But it all comes down to deciding where you stand, with the light or the dark, and seeing what comes from your final choice.

See how what I wrote up there was pretty concise and mostly easy to follow? That’s not the case with unpacking the plot of Sundered as someone playing it through. Before I get into the game itself, this is a good time to address the atmosphere and ideas of the game. If you’re not a fan of H.P. Lovecraft or other kinds of creeping horror, appropriately titled “eldritch” materials, this could be a confusing, convoluted mess of a time. I basically took notes as the Trapezohedron spoke to me in an otherworldly tongue, reading off subtitles that gave me a flowery description of truly dark and terrifying stuff. Even then, I did need to consult the Steam forums to confirm a couple of details, because I wasn’t totally sure myself. If you’re in the game for a story, there’s certainly one here, and it’s pretty involved, but goddamn is it hard to follow at times. I recommend you basically commit to playing the game and going from there, because, holy hell, I had such a blast with Sundered. 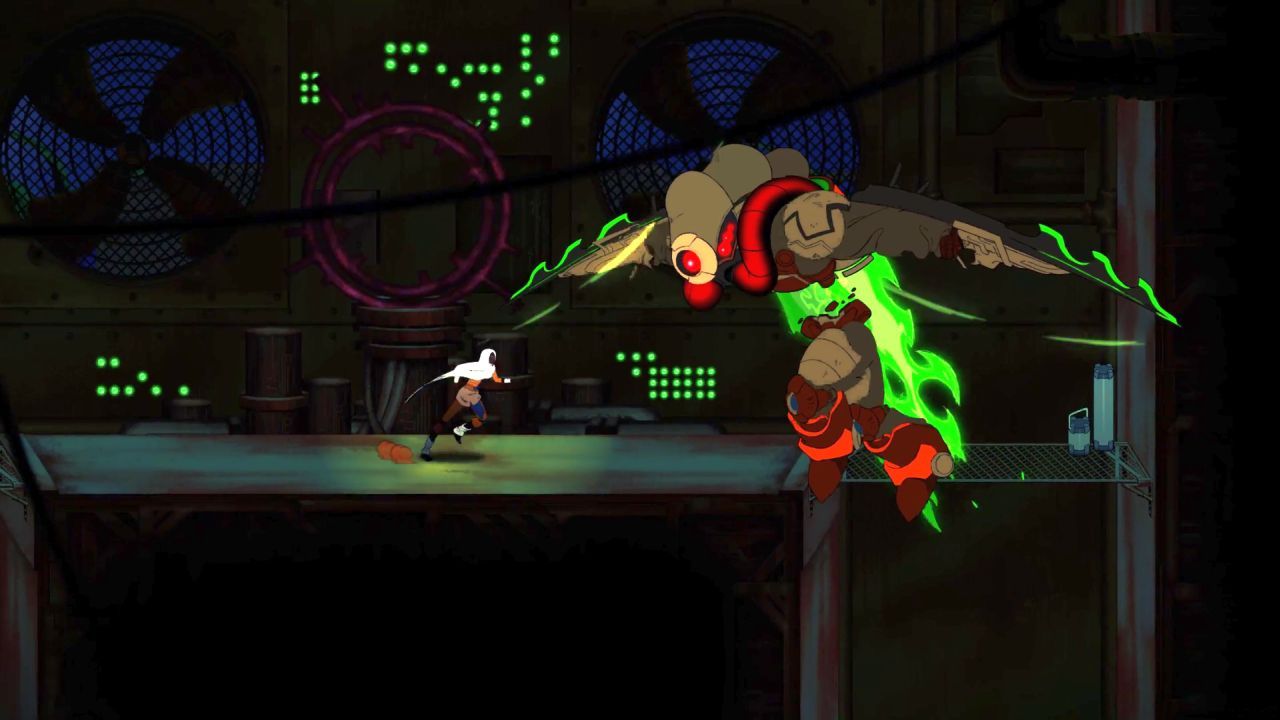 Sundered: Eldritch Edition presents as a metrovania with some procedurally generated elements. You need to find and unlock abilities in order to access other parts of the map, and a majority of the rooms will shift and reset every time you die. Major landmarks, such as where a boss is or where the gateway to another world rests, stay the same, so you can reference a map to have a general idea of where you’re going. The smaller rooms themselves, however, move and reconfigure, resulting in longer or shorter jaunts from point A to point B. The rooms resetting also regenerates breakable objects that give you cash, monstrous hordes that swarm you from all directions, and the occasional temporary powerup that grants you boons like “see all hidden treasures” or “poison every enemy you hit, which is super helpful before you get crushed by a Lich enemy.” The game can toss you a bone every once in a while in terms of when the swarms appear and when power ups do, but, mostly, it’s luck of the draw. And you’ll get killed a result, which is better than it sounds.

Dying brings you back to the Sanctuary room, where you see a massive skill tree that you flush out through all those shards and points that enemies and broken beakers drop. While not as full and complex as, say, the sphere grid of Final Fantasy X, there’s choices to be made as to when and how to upgrade Eshe, allowing you to decide between going towards health, defense, attack or, my personal favorite, luck. You also get skills at different ends of the tree, like a permanent boost to your health containers that you carry, or the ability to add an additional skill slot. Skill slots let you put in these skills that Lich enemies drop, and they can be delightfully damaging, though usually with caveats. Like “recharge your health through hitting, but health containers drop less” or “do more damage in combos, but enemies spawn 50% more.” You can naturally get three different skill slots (with a fourth in a moment) but you’ll get close to forty skill perks along the way. You know what that means: mix and match to your heart’s content!

Along with the skill tree, there’s also the matter of “resist” or “embrace.” You see, as you find those Elder Shards (they’re with bosses, you should know they’re with bosses), you then have to figure out what you’ll be doing next with said shard. If you decide to add it to your own skill set, you start to become corrupted, which unlocks dark powers, which are super, super frigging cool. Things like wall running, teleportation, a MASSIVE GUN BLAST and a pulsing shield of hate that damages and insta-kills weak enemies. If you destroy the shard in a handy-dandy blast furnace, you get a new pathway on your skill tree that adds…well, extra damage, some passive dodge attacks, and the ability to jump a third time. When you type it out and look at it, it’s not hard to make the decision. However, without being a massive spoiler, there are three different endings to the game, so you can imagine which ending might be considered “good” and which one might be considered “bad.” I recommend playing through twice and just leaning all the way good or evil both times to fully see how much Eshe maxes out. Don’t mix and match: you never get the full extent of either side’s power, and even the game seems to frown on your wishy-washy nature. 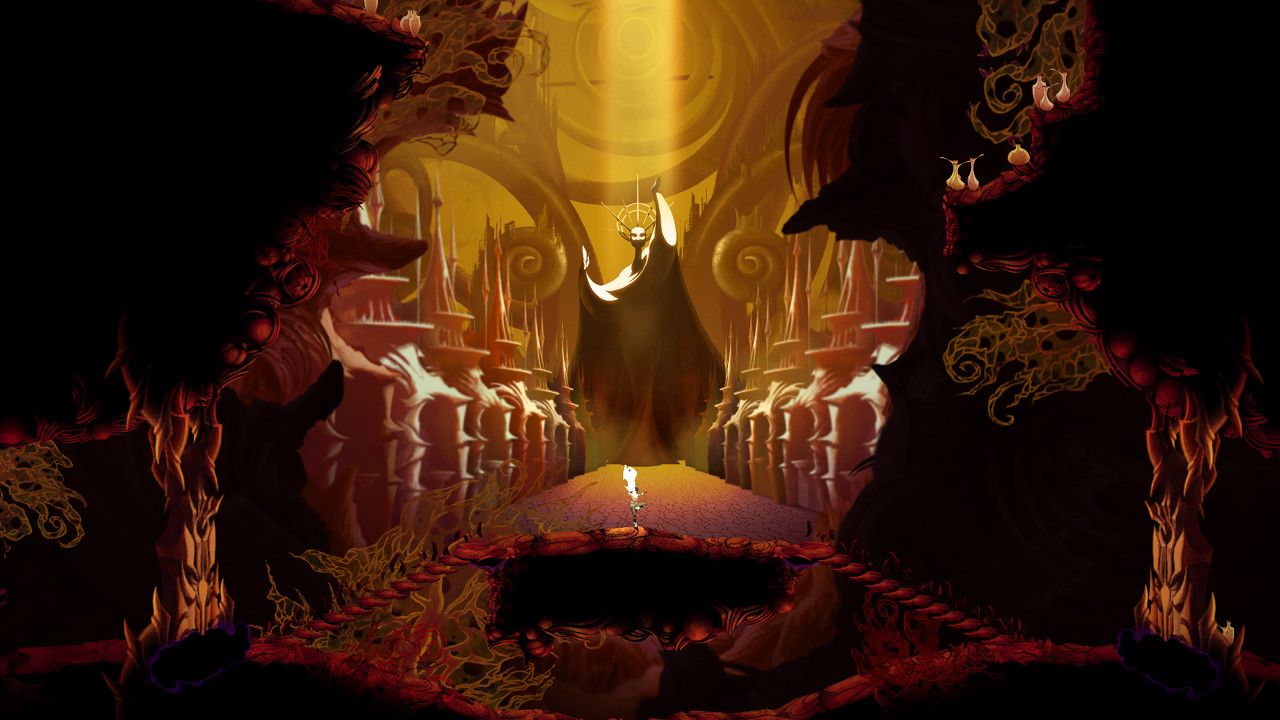 Into the gameplay itself, Sundered is a seriously cool, really tight metrovania title with four difficulty titles and a beautiful way of luring players into a false sense of superiority. If you start on normal, you’ll think you’re king of the jungle out the gate. Most enemies spawn at a pretty decent rate (in the first area near the Valkyrie Base, maybe only five at a time) and the hit combos keep you alive for a long time. The shield that you pick up almost immediately is enough to fend off most minor attacks and it recharges fast enough. There are health kits everywhere from the first few breakable boxes, so many, in fact, that you can’t pick them all up and actually have to TRY to get hit. The jumps seem really far, until you realize Eshe is this lithe, spritely character who can make wide traverses that seem almost effortless. It’s a wonderful feeling, and you smugly think you should have set the difficulty higher, right up until you run into your first Hunter, and then the game just absolutely beats the uppity right out of you.

Once Sundered knows that you understand the game, the pain comes. The pain comes HARD. Suddenly you are in a nonstop crossfire of snipers that can literally blast your ass from rooms away. Panzers float through the walls, and, oh boy, one of them is a cloaking boss who has a name: enemies who actually have NAMES are a surefire death sentence. You get dragged down by the tentacles of death, thrown into the skill tree, and you figure out what you need to adjust to live again. Go back. Get a bit further. Still die. Find another way to go another direction, hit a dead-end. Double back and go up instead of down, find a new pathway. Sundered actually brought out this real sense of enjoyment for me that I don’t always get in metrovania titles because of the roguelike element. Instead of me just memorizing which way to go, I had to go with my gut and make a vague attempt of a direction, hoping that I was strong enough to survive whatever was around the corner. It’s bad enough to deal with the enemies, but, once the traps start and you’re dealing with brambles, lasers, grappling hook-like mounts and everything else, you’re firmly and thickly in hell, and you LOVE it.

Thunder Lotus Games famously made Jotun before Sundered, and the same kind of loving, hand-drawn, cartoon appeal comes through here. There’s something to be said for such style that it feels like the best parts of the 80s and 90s animation scene. The loving way that Eshe is animated to jump and strike, the surges of her finisher attack, the way that bosses rumble to life and suddenly take insane interest in your death is all the more magnificent with the amazing way that this game is drawn. Even more impressive is, despite massive numbers of enemies descending on you with explosions, rifle shots, electric shocks and more, I never felt there was a moment where the game stuttered or staggered in a debilitating way. In fact, there was only one instance in my whole memory of gameplay where I felt that there was any noticeable chugging, and that happened in a very early death. After that, the game stayed true, delivering the stunning graphics and pretty appropriate soundtrack throughout. It’s almost indecent how something that, at the core, is so repulsive and evil, can look so damn good throughout.

I am straight up in love with Sundered: Eldritch Edition. There are so many metrovania titles currently, and I cannot recommend this one enough for players who are looking for a bit of a tattered map approach to what you need to do and how to get through it all. The story is so damn hard to follow, but understanding where I need to go to stomp ass, get stronger, and evolve gargoyle wings to be a harbinger of evil is not. You can play through and do the right thing, fair enough, be a good little hero and make sure you save the world from darkness, yay. But I always choose the devil room in Isaac, and I’ll always choose the Elder Shards in Sundered. Let’s face it: sometimes, the most fun you can have is being bad.

This game is a massive undertaking in understanding, but the skills, the game play and the gorgeous design more than make up for the details.