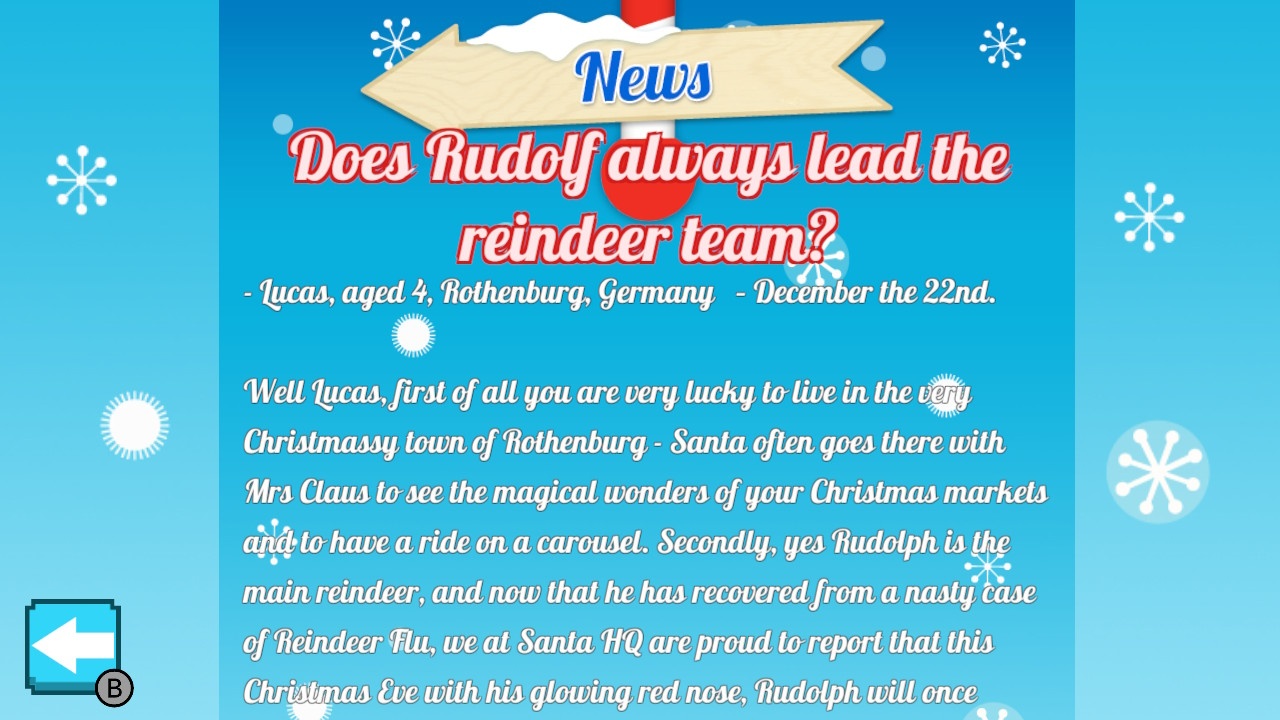 Well, the season is upon us, and we are mere days away from Christmas arriving and everyone having the best damn day of the year. I love Christmas, I really do, and it’s always heartwarming to see the traditions that people carry out in an effort to better represent all the magic and wonder of this event. The Santa Tracker has been a relatively modern one, but a good one, nonetheless: using satellites and GPS locations to show kids where Santa is, how fast he’s going, and to give them an idea that he’ll be here soon; get to bed because if he sees you, the presents go to Joey across the street. The Santa Tracker has existed on the computer for a while, and there have been smartphone versions in recent years as well. And, with the advent of more and more applications on the Nintendo Switch, it only seems fair that we go ahead and release a Santa Tracker here as well.

The application is set up to be both button and touch screen functional, and, to the developer’s credit, it’s chock full of extra stuff. The most important one is the main Tracker screen, the top of the North Pole of choices, where we see Santa jettison across the globe. This is a tricky situation, but, based on how I’ve seen other trackers function in the past, I imagine you’ll be seeing Santa bouncing in a clear configuration across the globe as the night draws on and it gets closer to the appropriate witching hour wherever you live. At the time of this review, there are still four days left till Christmas, so Santa is in a holding pattern. He’s getting the kinks out, making sure he can make it to the different countries on time, and it even says as such at the bottom of the screen: Santa is just out for a ride. However, it does do some important things. Firstly, it shows Santa visiting everywhere, not just the major countries and such. We see Santa bounce from Finland all the way to Brazil, double back to Sri Lanka, and then round down to Australia. It also shows kids how fast Santa is travelling, roughly seven or eight digits of kilometers per hour. The fat man is hauling tail, so this helps debunk that little jerk at school who tries using John Lithgow’s expose from several years back to show why Santa isn’t real. I’m sorry your parents got divorced, Oliver, but stop trying to ruin stuff for my family. 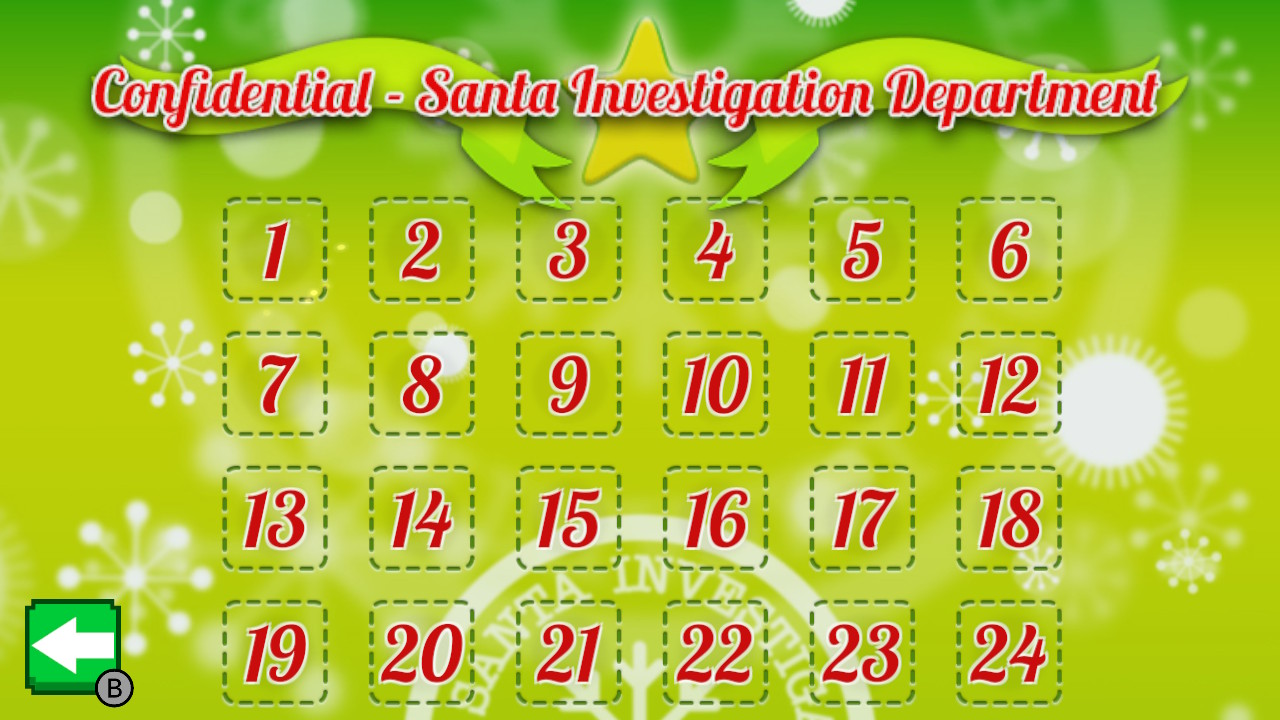 After that there’s a series of extras, and this is where things get a bit tenuous as far as what applies or doesn’t apply for kids. There’s a countdown to Christmas, down to the second, which also shows how many sleeps until Christmas. This is great because it addresses what the kids care about most, which is how many more times they need to lie awake sleeplessly to see if Santa filled their stockings with VBucks gift cards and some clearance Minecraft swag from Thinkgeek. But…I mean, it’s just a clock. It’s good, and it makes sense bundled with the Tracker, but it’s a damn countdown timer. Everything has a timer now. Everyones phone, tablet, 3DS, your Switch (I think), this is just aesthetic. But it’s at least the most relevant one that a kid might use autonomously.

The other points are more circumstantial. You’ve got news announcements from Santa tracker HQ, which talk about how to be on the nice list and how to get into the holiday spirit the best. You’ve got blog posts from Santa himself, talking about memorable moments in Christmas, what he likes the best about his trip, and his thoughts on snacks, presents, and good kids. And you’ve got this crazy calendar that’s more advent than anything else, slowly revealing different days of information as the developers seek to hunt down Santa and find him somewhere in the world. After all, everyone wants to get a glimpse of Santa, even though we’re not supposed to. These are really interesting additions, and I appreciate that they cache and unlock offline (it would be a nightmare if this app had to connect to the Internet every time), but they also ride a tenuous line of appreciation. They’re too verbose for a lot of young readers to want to give it a shot and read themselves, not to mention the fun and flowery Christmas Cursive font makes for some difficulty to read for new eyes. On the other hand, if you can read through these updates easily about CCTV footage of Santa, or Mrs. Claus’ insistence that Santa eat more veggies and less brandy (seriously?), then your investment to Santa’s condition in an app is kind of oddly warranted. This feels more like an activity that’s all part of a family interaction and less a solo enterprise, which might be difficult for young Switch owners to understand. 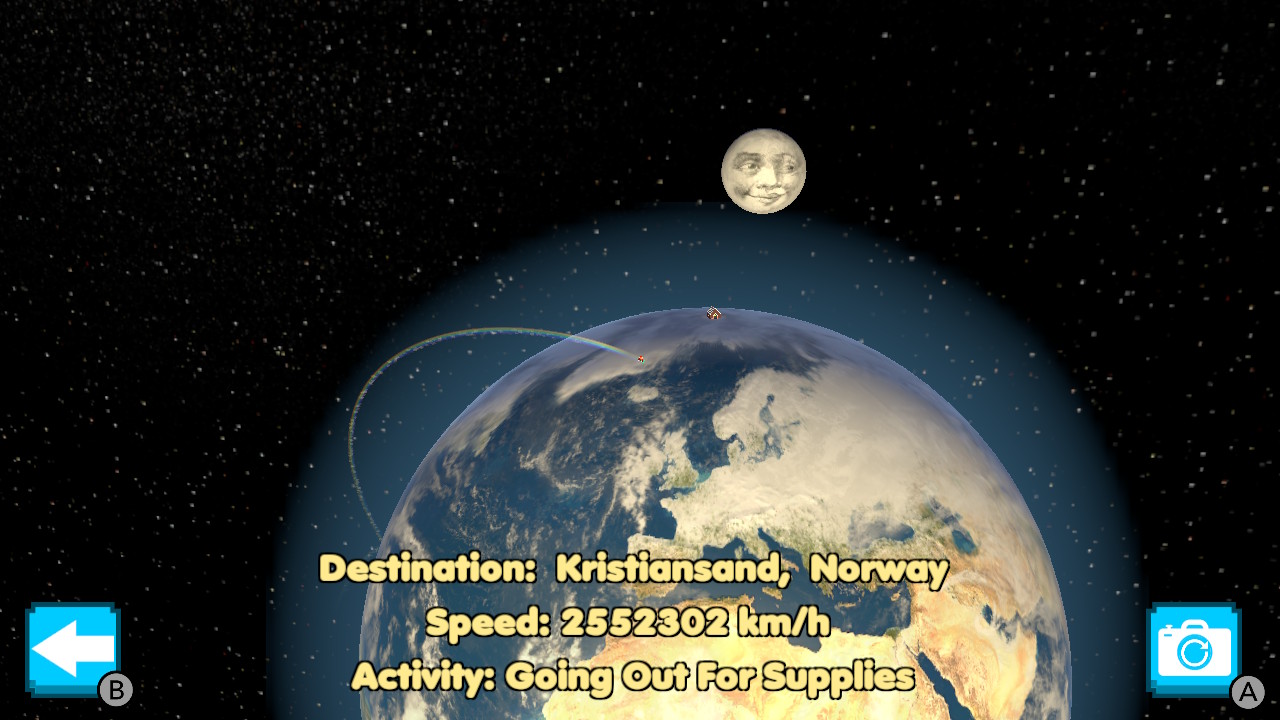 The overall aesthetic of it is decent, and the Santa tracker does have some pretty, if simple, background music (Here Come Santa Claus) that just repeats over and over again while you explore the updates and read more about mysterious containers going to the North Pole. The only thing I’ll strictly advise against is clicking the musical present in the corner. As there are no settings for this thing, you end up hearing an incredibly abrasive piano rendition of one of several Christmas carols while your JoyCons buzz in time with the music. The piano is just so stark and harsh it feels like the version of Jingle Bells that Schroder does for Lucy in A Charlie Brown Christmas.  You have better Christmas music elsewhere, trust me.

I don’t totally get the Santa Tracker for the Nintendo Switch, but, then again, I’m not a kid who owns a Switch. I do see the appeal: having something up on the big screen through docked mode, having some information to share with the little ones over a series of days to help get in the Christmas spirit, and putting something festive in everyone’s hands to bring with them. I guess my hang up is that it feels like this was a mobile app that was probably a couple bucks that got ported to the Switch in hopes of grabbing attention in an impulsive way. But since there isn’t an easy, fast way to Switch applications on the Switch, nor is there any incentive to keep using this after December 25th, it’s a bit of a gimmick. For three bucks, if you’re super into Christmas and Santa and want to keep your phone free of stuff that your kids beg you to check, then alright, go ahead. But if you are expecting literally anything more than what I’ve just described over the last few paragraphs, you’re going to find this to be a lump of coal.

A perfectly adequate application that feels odd to have on the Switch, but is executed well nonetheless.