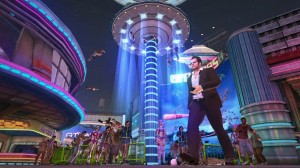 Due to the unexpected success of the original Dead Rising in the West, Capcom decided they would embrace a more Western-centric design philosophy for the sequel and would do so by outsourcing core development duties to Blue Castle Games from Vancouver. While a potentially risky move on paper, it’s one that paid off in spades thanks to a combination of Capcom’s careful overseeing of the project and Blue Castle’s willingness to embrace the more quirky, Japanese elements of the game’s design just as much as the Western ones that they were specifically brought in to cultivate. The result of this was a game that, while certainly more westernised than the original, nonetheless felt like it had been developed by Capcom in-house. This successful coming together of East and West has not only led to another release in the hugely successful Dead Rising series, but also to the fact that development of this title would be handled almost exclusively by Blue Castle….or as they are now known, Capcom Vancouver.

Despite being labelled as ‘another’ of Capcom’s cynical cash-ins by the quick to judge internet crowd, in hand, Off the Record soon proves itself to be a unique, polished and hugely entertaining entry into the series. Sure, it’s set in Fortune City and thus inevitably retreads many of the locations visited in Dead Rising 2, but this game really does feel like its own beast. It feels like a game in which Capcom Vancouver have been let of the leash, able to point the series in the direction they hope to take it in the future. I’m sure the big boys at Capcom still have their fair share of input, but you do get the impression that this is the game that Blue Castle wanted to make when they were initially approached by Capcom to develop the sequel.

With new locations (including the expansive Uranus Park), a host of new moves, the return of photography and a host of new characters, weapons and enemy types, Off the Record is so much more than the glorified downloadable content that some had labelled it as pre-release. In fact, I’m willing to go out on a limb and say that thanks to a string of well implemented refinements and successful additions to the core gameplay, Off the Record is hands down the best game in the series to date.

The story, which follows the returning Frank West, essentially shows the events of Dead Rising 2 from a different angle but thanks to the clever twists on old locations and an array of interesting new characters proves consistently entertaining. While the primary emphasis is once again on creating all new combo weapons to take down the even greater number of on-screen zombies, thanks to a some exciting new items and some cool new moves, the addictive nature of weapon creation hasn’t been diluted in any way. In fact, thanks to the return of Frank’s wrestling abilities and the introduction of such fantastically brilliant moves as Zombie Walk, which lets Frank mingle with the undead, combat in Dead Rising has never felt more varied or enjoyable. 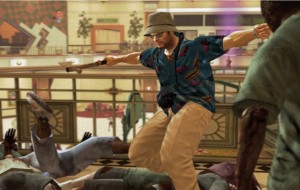 As glad as I am to see Frank’s repertoire of wrestling moves make a return, I’m even happier to see the return of the journalistic options that were so sorely missing from Dead Rising 2. Not only does the returning camera give an extra dimension to gameplay but it also gives the player an additional way to earn PP with which to level up Frank into the fighting force he’ll need to be to get through his later brushes with danger.

If you haven’t played either of the first two games in the series, those who have will let you know how important levelling up can be in Dead Rising’s hugely unforgiving universe. Despite its tongue in cheek charm and OTT aesthetic, Dead Rising is renowned for its hard-as-nails gameplay and outrageous difficulty spikes that would often force players back to the start of the game with their current level character in an attempt to reach the same spot with their character powered up to the level required for progression. While Off the Record is still a tricky game to navigate, Capcom Vancouver has finally introduced a few tweaks to make the game less infuriating for the average gamer. Make no doubt about it, as much as the high level of difficulty was loved by some, it certainly put off a huge number of players who simply couldn’t deal with the unforgiving nature of the game.

The biggest of these changes is the introduction of infrequent but hugely helpful checkpoints. While I’m sure the hardcore will bleat and moan until they’re blue in the face about this, the option is there to play Off the Record in the traditional one save slot format of the original and, the fact of the matter is, Off the Record is a lot more enjoyable and certainly a hell of lot less stressful thanks to its inclusion.

While the checkpoint system will inevitably steal the headlines and form the basis of many a hardcore gamer rant, it’s actually the inclusion of a sandbox mode right from the start that has the largest effect on character progression. With the whole city unlocked from the start and no health bar to worry about, the sandbox mode allows you to kill zombies until your heart’s content while also offering up a range of extremely varied challenges that are each linked to a unique online leaderboard. Just wandering around coming across random challenges is great fun and can prove an extremely addictive experience. The greatest thing about it, though, is that character levelling in each mode isn’t mutually exclusive, so, if you do hit one of Dead Rising’s famous brick walls, you can just mess around in the sandbox for a while until Frank is sufficiently levelled up, at which point you can jump back into the story and hopefully progress onwards – it’s a great way to keep Dead Rising’s high level of difficulty while making it more accessible to the mass market. God bless you, Capcom Vancouver.

Rounding off this excellent package is the online co-op option. With the host playing as their levelled up Frank and the guest joining as a levelled to match Chuck from Dead Rising 2, playing Off the Record online is as simple and as smooth an experience as you would have hoped, and proved just as enjoyable as I would have expected it to be. As much fun as laying waste to a horde of shambling zombies is, it’s even more so with a friend along for the ride. Who knew, aye.

Despite their successful work on Dead Rising 2, Off the Record feels like Capcom Vancouver truly stamping their own identity onto the series. It’s more accessible than previous entries and arguably the most enjoyable thus far. The inclusion of sandbox mode right from the start is inspired and online co-op proves a more than welcome addition to this already robust package. Off the Record does return to many of the locations found in Dead Rising 2 but this really does feel like its own game. The production values throughout are sky high, the combat is fantastic and the new additions are almost universally successful. Despite the inevitable air of familiarity and the grumblings of the hardcore, Off the Record is a game eager to please and does so with consummate ease.