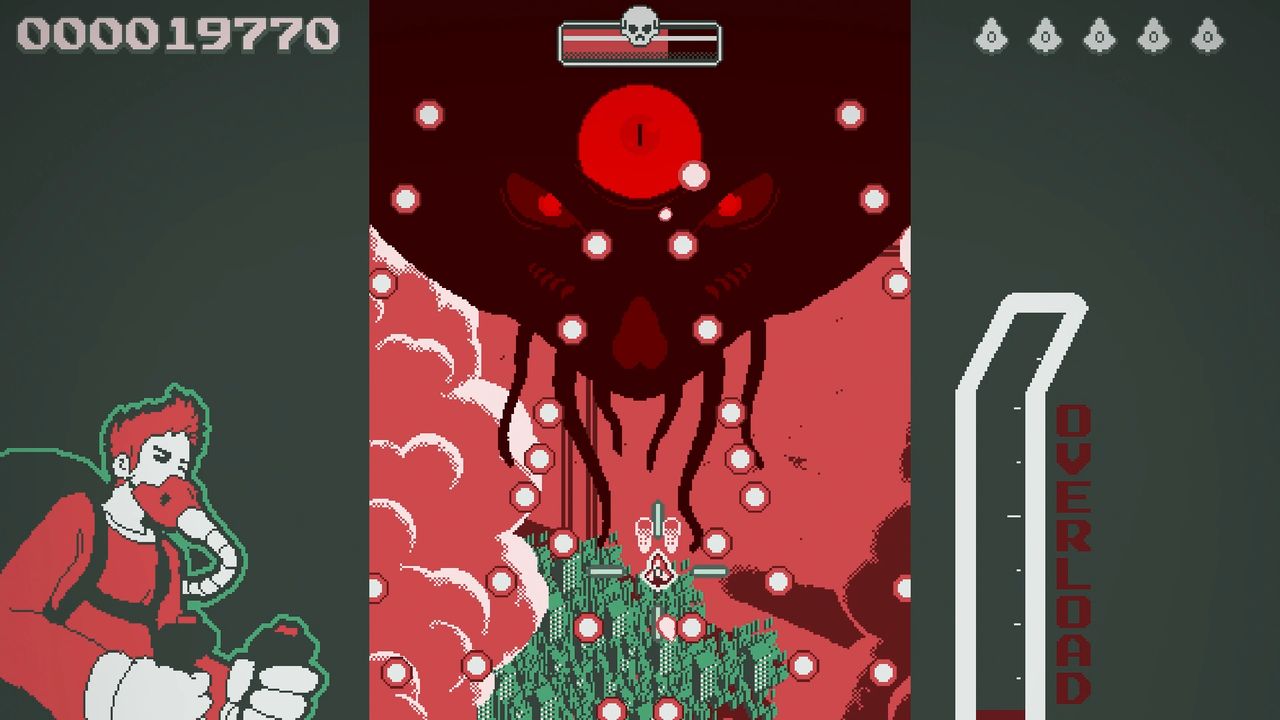 Vertical shooters are one of those games that demand and invite a ton of replay value. In a three part assault, it comes as such: first, you desperately want to achieve a better high score. Second, you often cannot and will not beat the game on the highest difficulty (if you can adjust it) coming in with fresh eyes. Lastly, you end up getting caught in the lore and lust of the game itself. You demand that you can figure out and memorize patterns, timing, ideals that make it so you can get through the game without wasting a single life or ship or whatever it might be. For Red Death, a pixel-art shmup created by indie team Panda Indie Studio, it’s a great combination of these three elements, though a fourth one presents itself quickly: punishment.

Most shmups don’t seem to care about plot (or, if they do, it’s lost in some obfuscated lore), but Red Death actually demands that you play story mode before you’re allowed the arcade approach, which I have my own feelings about. You are a pilot in some kind of fighter jet, and there are aliens attacking Earth that have created some serious extra terrestrial weirdness. It only takes one stage to find out that you’re being assaulted by something that has connections to Egyptian mythology, but more on that becomes clearer the further you progress. Again, if you get into the game, the only, ONLY way to unlock arcade mode is to beat story mode, and continues aren’t a possibility. I become instantly, painfully aware that this game has something to prove, and I’m not pleased at the high difficulty entrance based purely on the setup. Then again, as long as Red Death can perform well in the field of bullet hell, it should be alright, right? 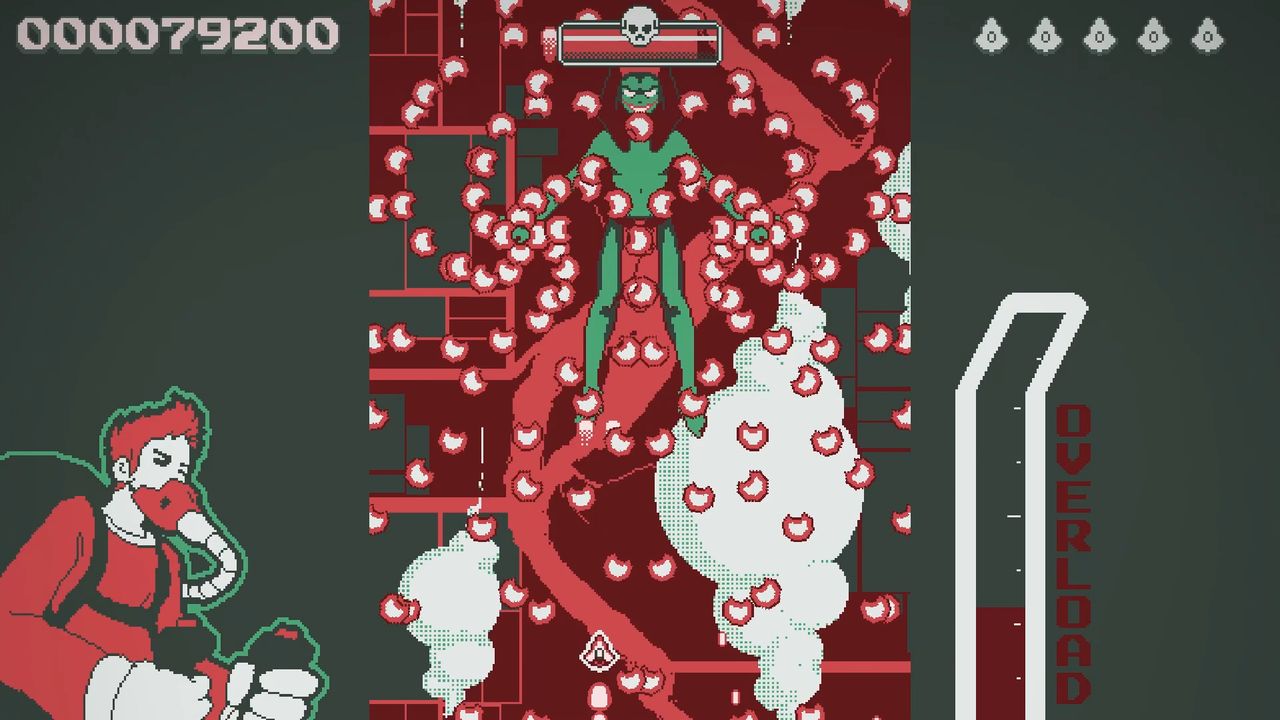 Red Death’s vertical approach has a lot of heavy requirements out the gate. There are no one-hit mobs to help warm you up or give you relief in the waves, at least not initially. Every enemy seems to have some kind of projectile attack, and most of them are fairly dense in bullets and recognizable in pattern. You don’t even get weapon power ups at first for your solitary weapon; you receive extra ships in clear preparation for your immediate demise. The game does have a slowdown mechanic, but it’s interestingly more technical than things that I’ve seen in other games. Rather than make a clean adjustment of either your ship slowing down or the enemies moving slower, the slowdown buttons forces the game to start puttering like it’s having trouble rendering. Instead of feeling like “I can control time!” It comes across like “My poor Switch can’t even handle this game!” As a result, I rarely, if ever, used it, simply because it wasn’t enough to deeply affect the combat but did annoy me.

In lieu of a bomb button, you have a chargeable gauge called “Overload” that allows you to, when full, temporarily increase your firepower. While this doesn’t seem like much….it’s because it isn’t. Overload is potentially helpful in Red Death for boss fights or when you’ve already got a handle of the situation but want to finish it faster. However, bombs, a classic staple of shmups, act as a Hail Mary, panic button sort of option when things become too murky. There’s nothing like that here to help out, and the result is leaving players feeling helpless when the walls start to close in. It’s seriously stressful when you realize that murder is bearing down on you, a massive tentacle is about to strike from heaven to knock you out, and your only option is to keep dancing. For some players, that should be exciting and challenging, but it can easily breed despair for newcomers and even novice shooters.

So what works about Red Death? Well, the presentation is pretty dope. The pixel art style works well in this xenomorphic world, combining old Anubis-style gods with the classic space brain and messy organisms that Ridley Scott once presented to the audience. I can’t disagree that there’s a certain sharp, promising delivery in the aesthetic, and it looks and feels great (when you aren’t using the slowdown button). Additionally the simple, sharp soundtrack works wonders with the gameplay itself. By using this electronic familiarity of old school games, you properly generate a sense of dread and anxiety as you progress further and further into the game. In all honesty, I hope that Panda Indie Studio (and their publishing partner EastAsia) consider doing a low fidelity, retro inspired horror game, because I see a lot of promise in their designs and delivery. They also manage to do a solid job of having a decent set of dialogue between the ship commander, the mission control and the different alien enemies that he encounters, making it so I almost didn’t hate story mode. I really wished I could have jumped into the arcade mode directly, but story mode isn’t terrible by any stretch of the imagination, nor is it terrifically long. 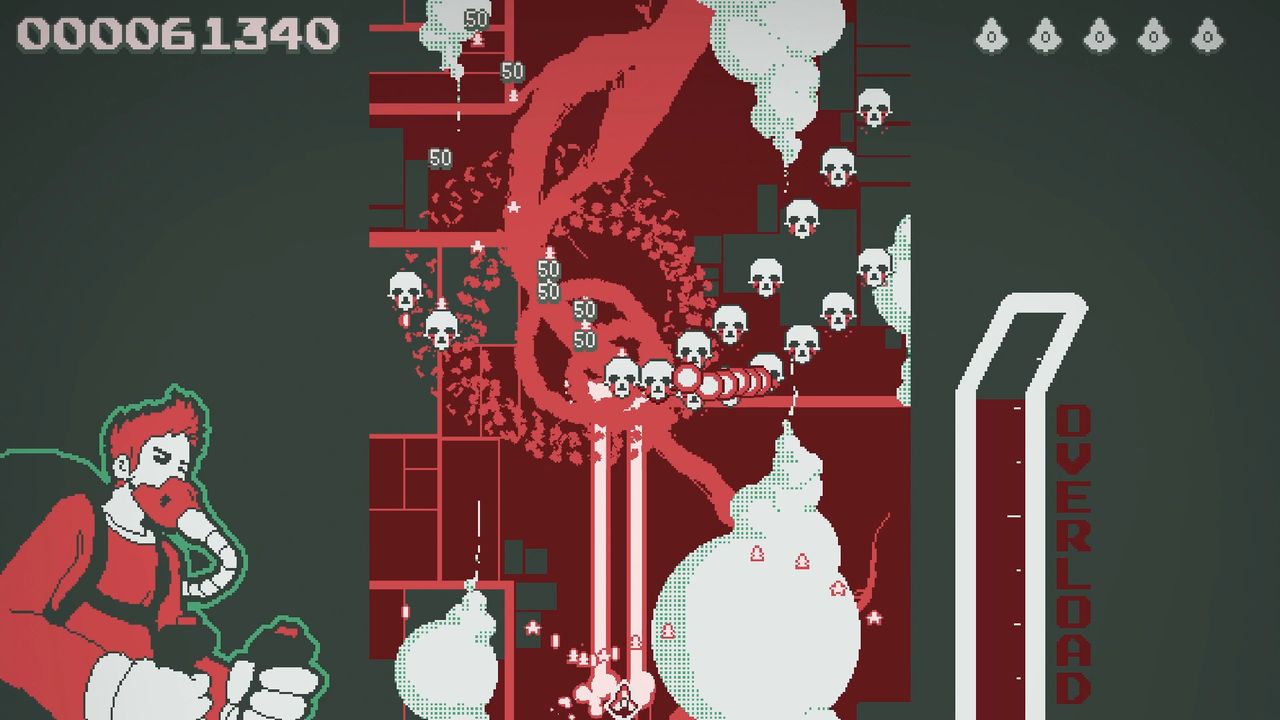 The name of the game with Red Death is “homework style shooting.” That is to say: the bosses are hard and the bullet patterns are difficult, but nothing is impossible. What I learned very early on is to get the laser power up when it appears 3/4th of the way through the first stage and do your damndest to never, ever let it go. If you can get the laser, then have the power ups to double your laser, and then unleash an Overload and manage to stay alive for like eight seconds, you can defeat almost anything. But your opportunity to get the laser only comes like once a level (if that), so you need to “do your homework” by making sure you stay alive and I hit until you get to the boss. If you do that sort of “studying”, then the bosses aren’t easy, but they’re certainly doable and with a significantly higher success rate than if you had a normal blaster (or the missile, which I straight up hated). If you died, then you’re “going into the test without studying” and “you’ll get shot in the face to death.” Just like real tests.

Red Death is a fun and surprisingly complex escape that comes at a very reasonable price. If you’re a fan of the shooting genre and want something to occupy your time, I recommend getting your hands on it immediately and sinking some much deserved time into this clever, brutal but interesting game. Just remember that there’s actually some real arcade fun after you finish the story mode, so buckle down, do your best and get ready to pass the hours blasting the hell out of some fiendishly hard bullet patterns.

If you’re looking for a difficult but satisfying shooter, then this is a Red Death you WANT to invite into your house.