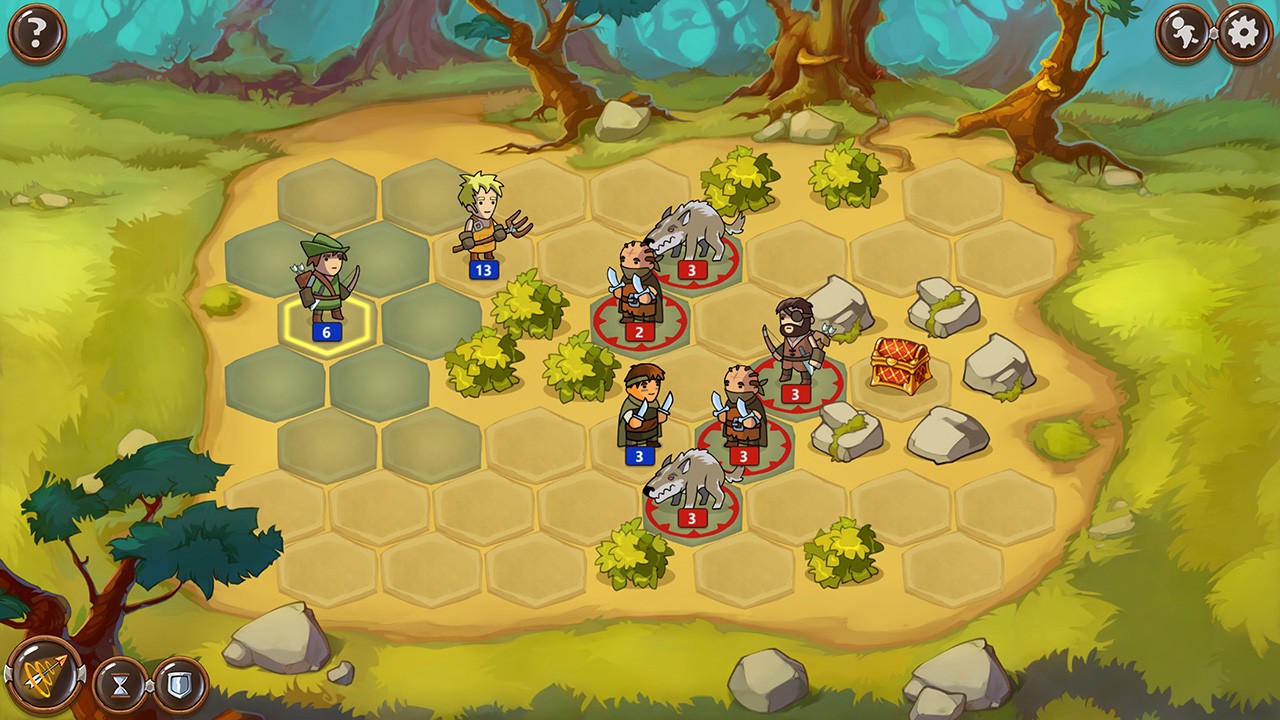 You know. Not everything within video gaming has to revolve around some new mechanic or element of gameplay to make it a viable title to play. Sometimes, especially within video gaming, as well as our day-to-day lives, familiarity is a good thing. When it comes to a style or genre, you know it’s going to be safe, or a worthy purchase; even if it doesn’t hold anything new or ground-breaking within its set-up. You know you’re going to be re-treading a path of used mechanics, or even a journey, but you can be rest assured that its familiarity will bring fun; the most most important element of video gaming. It’s something that can be easily applied to Braveland Trilogy, a collection of three turn-based, role-players that don’t necessarily bring anything new to the genre, but its air of familiarity brings a safe and fun adventure as it embarks on the Nintendo Switch.

Developed by Tortuga Team and published through Ellada Games, Braveland Trilogy brings a collection of adventures that are told through three books. Each adventure needs to played through in order, beginning with the warrior who embarks on a quest to seek revenge on those responsible on ransacking his home village. The second book, the wizard, follows an apprentice from the school of magic, as she embarks on an adventure that sees her transform from student to heroine as she completes the final quest of her trials. And last, but not least, the third book of the trilogy, entitled the pirate, sees you joining a brigand of pirates and setting forth on an adventure that sees you battling an army of evil undead after being shipwrecked on an island.

Although three different stories, the gameplay element of each book remains the same. Each segment revolves around a role-playing adventure, with segments of turn-based combat. From a world map, you embark on a series of pre-determined routes that take you from point-to-point. Each point, or node, presents a variety of options, from cutscenes that drive the narrative forward, to hero-boosting relics, shops to buy extra troops for your party or items, fields of combat, as well as a few branching roads that can lead to a series of side quests. Each of the stories’ maps also cross differing terrains, from woodland areas to arid deserts and snow-filled tundras. However, each story map does contain a few extras that build from its previous excursions, with dungeons to explore as the wizard and sea battles as the pirate. 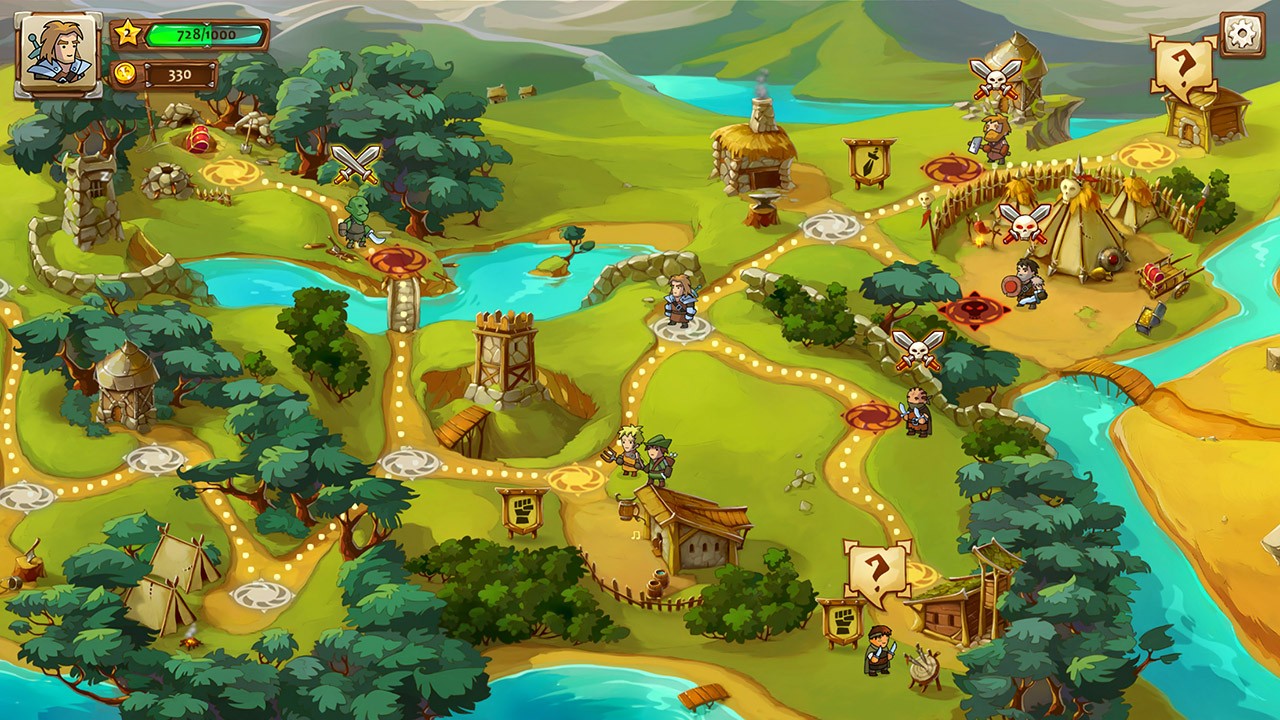 Each of the characters’ stories also contains a levelling system for you and your party, but its a nicely balanced mechanic that ensures you’re never particularly over or under-powered. Although open to some exploration, the level maps are largely linear and once complete, don’t offer anything new in terms of replay value. In fact, as far as role-playing games go, this is a title that offers nothing that hasn’t been done before. But it’s here, within its safety and familiarity, that the game brings a level of fun that is instantly familiar to fans of the genre. It may not be enough for seasoned travellers, but for those new to the genre or players who just enjoy a decent journey, this is an ideal game to sit back and relax too.

Its combat elements take place on a singular screen, with an hexagonal grid that determines area of movement. Using a turn-based mechanic, you and your party utilise a series of offensive and defensive moves against a number of enemy types. Strategists may find it a little too basic for their liking, but for anyone else, its style presents an easy-to-follow formula that is basic, yet still fun. Each combat bout is simply a slug-fest to find the last-man standing. Any fallen, or defeated party members are simply incapacitated until the bout is over, where they simply regenerate and regain for the next encounter. What these sections of the game do offer though, is a varied form of combat that ranges from magical abilities, ranged attacks and counter-attacks; depending on your party member or foe. 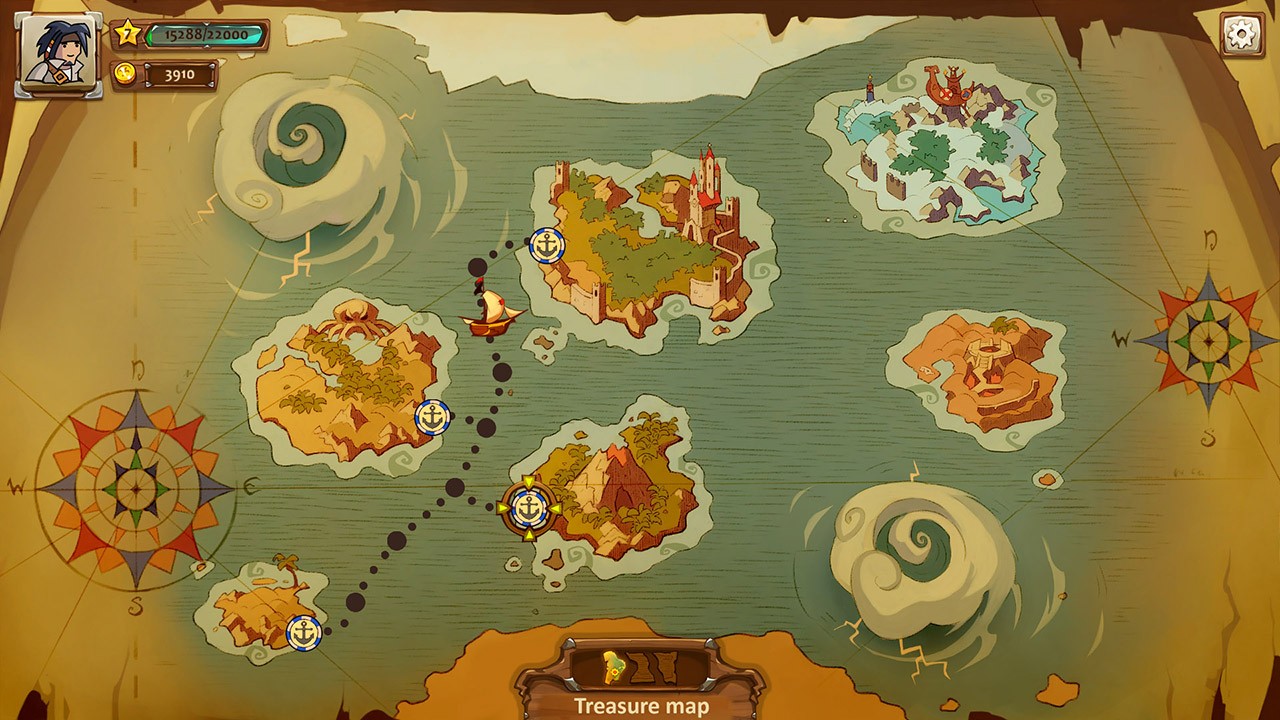 When it comes to the game as a whole, it follows a style that is either familiar to players of the genre, or provides an ideal entry point for new players. It’s basically a safe game that doesn’t offer anything new, but is still great fun to play through. Each story takes around six to seven hours to play through, but once completed, it doesn’t offer much more, making this a very limited title. However, it does play beautifully, with no technical issues or bugs throughout the whole of my play through. It also looks fantastic too, with sharp and bright hand-drawn locations, characters and maps. Its animations are also nicely presented, along with some nice sound effects and a soundtrack that is pleasing at best. The inclusion of full touch-screen control is also a nice implementation, with its graphical presentation looking fantastic on the Switch’s screen when played as a portable.

As well as its main campaign of three books to venture through, the game also offers a duel mode for local multiplayer skirmishes. These involve picking between two armies, one good and one bad, and tactically, using a series of moves and skills to combat each other until one party, or army, is victorious. Although it still follows the same pattern of combat found within the main campaigns, its couch multiplay allows for a more strategic level of play; although its armies are set by specific boundaries, often creating armies that can be stronger than others. However, as with the main game, this mode can make for a good family game where you can introduce younger players to the intricacies of its genre with its ease of play. You’ll even find that younger audiences can put up a decent challenge if the right army is selected.

Overall, Braveland Trilogy is a decent entry into the genre of tun-based role-playing. It follows a familiar pattern within its genre, making it a very safe game, yet one that is also a great deal of fun to play through. Veterans of role-playing or tactical games may find it a little too basic, but for newcomers or younger players, this is one of the best entry points for its style of gaming. Its bite-sized strategy and casual style sits nicely on the Switch and the presentation, throughout, looks fantastic on the small screen. Although its long-term appeal may only be limited, its three stories build upon each other and produce a more exciting experience the further you get. It doesn’t bring anything new to the table, but within the safety of its familiarity, you know what you’re going to get and in that respect, makes it a fun game to journey through. A brave land indeed.

Braveland Trilogy offers three adventures of turn-based, role-playing that is safe in what it delivers, yet retains a level of fun that makes it ideal for new players to the genre.