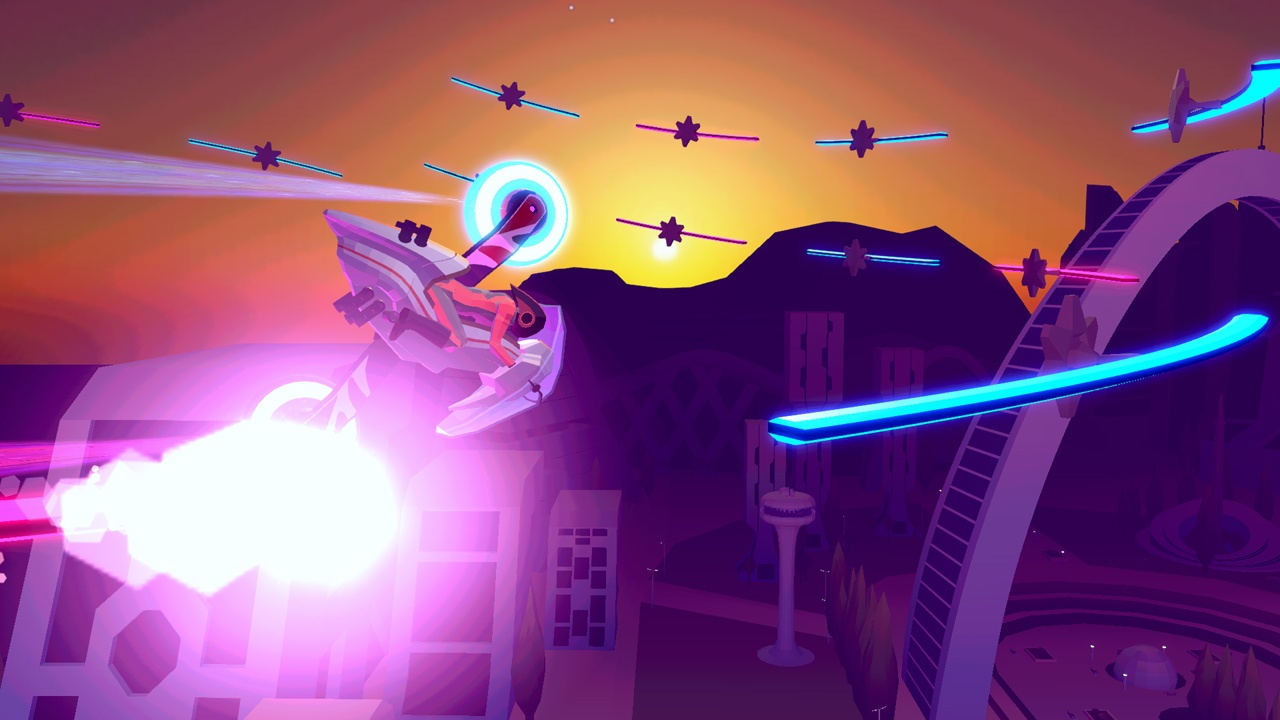 There is certainly something to be said for understanding a game through trial and error. The very first time I played the Binding of Isaac, I hated the damn thing. I thought it was grotesque, choppy, and way too difficult to just drop players into. But, for whatever reason, I kept trying it, and I gradually began to understand the intricacies and the possibilities of every run. Now it’s probably the most played game in both my Steam and Switch libraries, respectively (gotta unlock Forgotten all over again).  So while I may not think that FutureGrind, from Milkbag Games, will ever be a mainstay for me, it has the same kind of developing appreciation and addictiveness, and fans of stunt games will find a strangely satisfying experience within.

The FutureGrind vehicle is an odd, two wheeled contraption that must constantly be kept balanced, usually on one wheel. Rather than travel on road, the bike (for lack of a better label), travels on neon rails that hang above and below the race start, and it’s your job to get to the other end of the track alive. Every course has different colored rails, and, apart from the very first course, it’s your job to make sure the right colored wheel touches the right rail. Otherwise…you explode. Plain and simple. However, as you continue onward, there is a bit of a narrative happening in the background, as you realize that you need to keep your sponsors happy, and also appease an unknown viewer who watches your progress with great interest. Get better at performing a surprisingly wide variety of tricks as you unlock new bikes, new challenges, and compete for the highest score in each of the courses.

If you’re familiar with other stunting games, such as OlliOlli or my old SNES favorite, Uniracers, then you’ll get the general concept. The controls are a bit more simplified: you can only swing backwards and forwards, removing things like twists and spins from your stunt list. The additional challenge is still there, however, based on how you land on the rail. You can land on top (grind), attach from the bottom (undergrind), or, craziest of all, get your wheel looped on the rail while you hang from the bottom (hanggrind). Each of these styles will be required for you to beat certain course targets, and that’s on top of doing multiple degrees of front and backflips, transfers (going from colored rail to colored rail without touching a neutral white rail), and, oh yea, surviving the course. 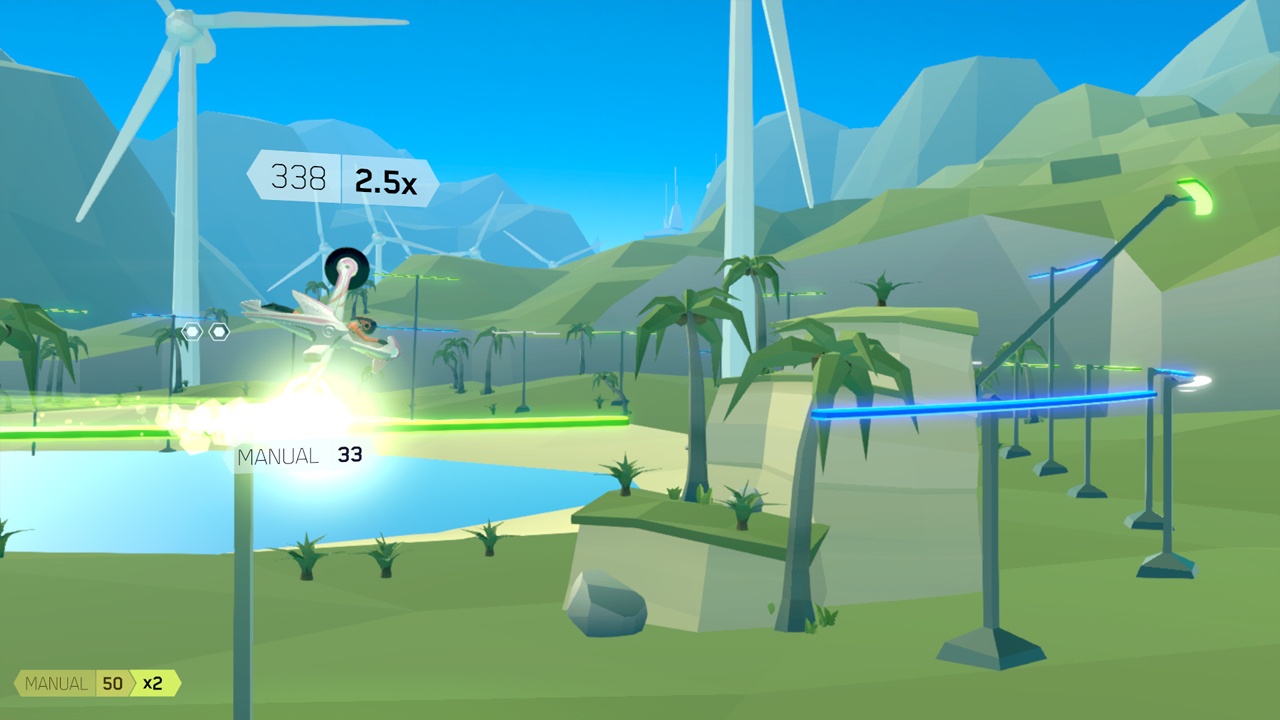 Your initial impression of FutureGrind might be like mine if you don’t play too far without giving the game a chance. Arguably, the first few stages are almost laughably easy for longtime players, as the target to merely survive or do a 720 frontflip are things that the game lays up for you with indicators and flashing lights. Your bike, the first couple, are well balanced, respond well, and you have the ability to do a double jump even from a drop. The level of control you have is amazing, and, if you aren’t fixated on a high score and getting the gold ranking for the stunt “survival” stages, you can fly through courses and unlock things at breakneck speed. You’ll get cocky, you’ll get bored, you’ll wonder why you spent the money for this game that plays and rewards you like a Newgrounds Flash title that someone coded over the weekend. Hang on, trust me, it gets more challenging.

In fact by the time you get to the Bunny Hill, you begin to understand that the game sincerely is not screwing around. The windows where you can rotate your bike around and get the rail become smaller and smaller, and there are multiple instances where failure to get the proper grind will result in your untimely death. There’s this bizarre moment on the River Run course where, if you undergrind one of the rails, you then need to CAREFULLY swing your bottom end up or you’ll end up smashing into the scenery (but swing too far and you’ll touch the wrong wheel, resulting in an explosion). What started out as a simple game quickly devolves into a crazy situation of timing, precision and massive amounts of failure in order to succeed. When we introduce the colored orbs in Hillside, where you can bounce but CANNOT recharge your double jump, the difficulty spikes through the roof and the room for error tightens to unbreathable constraints. You gotta make this jump. You gotta do this right. If you’re off by a second one way or another, you need to adjust with whatever you have or pray you’ve got enough momentum to make it to the next safe landing. Spoiler: you very, very rarely do. Since you cannot control the acceleration or breaking of your bike, you just need to strap in and pray you’re as good as you say you are. And I hope you are, because I certainly was not.

FutureGrind really delivers in the aesthetic and audio department, drinking in the neon future idea and making everything glow and glower with the sort of dark yet bright notes of dystopian cyberpunk. There are quite a few levels that take place in the sunlight and with bright foliage around, but it’s the nighttime, metropolitan courses that bring out the best in the game. Everything pops better in the darkness, and the rails seem to call out to you more when the sun is gone. The game is also framed by a well thought out and thumping soundtrack, moving through different styles of electronic music but mostly staying in a very traditional techno groove. It’s something that helps match the focus and intensity needed to successfully accomplish a 15x multiplier while simultaneously staying alive. 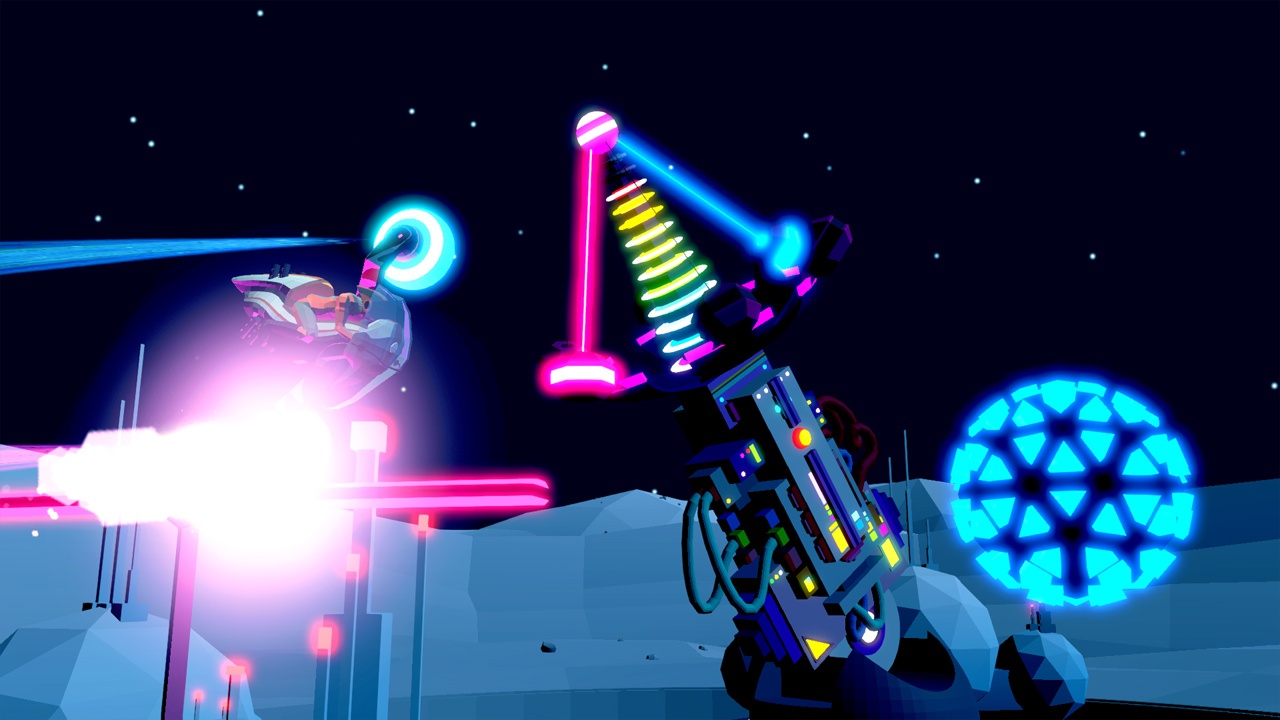 What’s going to make or break FutureGrind for audiences and players alike, is how patient the people holding the JoyCons are. This is distinctly a case of “easy to learn, hard to master,” and FutureGrind gives players a rather generous window to get accustomed to things before ramping up the difficulty. The problem is, you never come down off that ramp. Despite unlocking multiple bikes and types, you MUST use them for the courses the sponsors designed them for. You can’t just love the first, well-balanced bike you get and stick with that: to keep those sponsor dollars coming in, you have to master and re-master different bikes over and over again. And it gets rough, I’m not kidding. I loved Tony Hawk as a child, but I also loved being able to suck at it and just enjoy the soundtrack. You crash and ruin a combo, alright, whatever, get back up and try again. With FutureGrind, if you wipe out, you gotta start from the beginning all over again, and there’s no worse feeling in this game than seeing the checkered finish line and overtilting, killing yourself milliseconds from freedom. One joystick to control everything sounds like it’s the best, but it really demands an even greater level of precision than when you can delegate different movements to multiple sticks and buttons.

I’m excited to see this game start streaming. I think players who enjoy stunting will salivate and rejoice in the tight, razor-edged flips you can do, dropping perfectly into a hanggrind and acting like you meant to do it. For me, FutureGrind isn’t a game I can keep up long-term, but I will definitely watch more people play it, because I can appreciate the skill that goes into being a true bike master.

FutureGrind is unforgiving, split second and absolutely frustrating to master, but, my God, how beautiful it is to land the damn stunt.