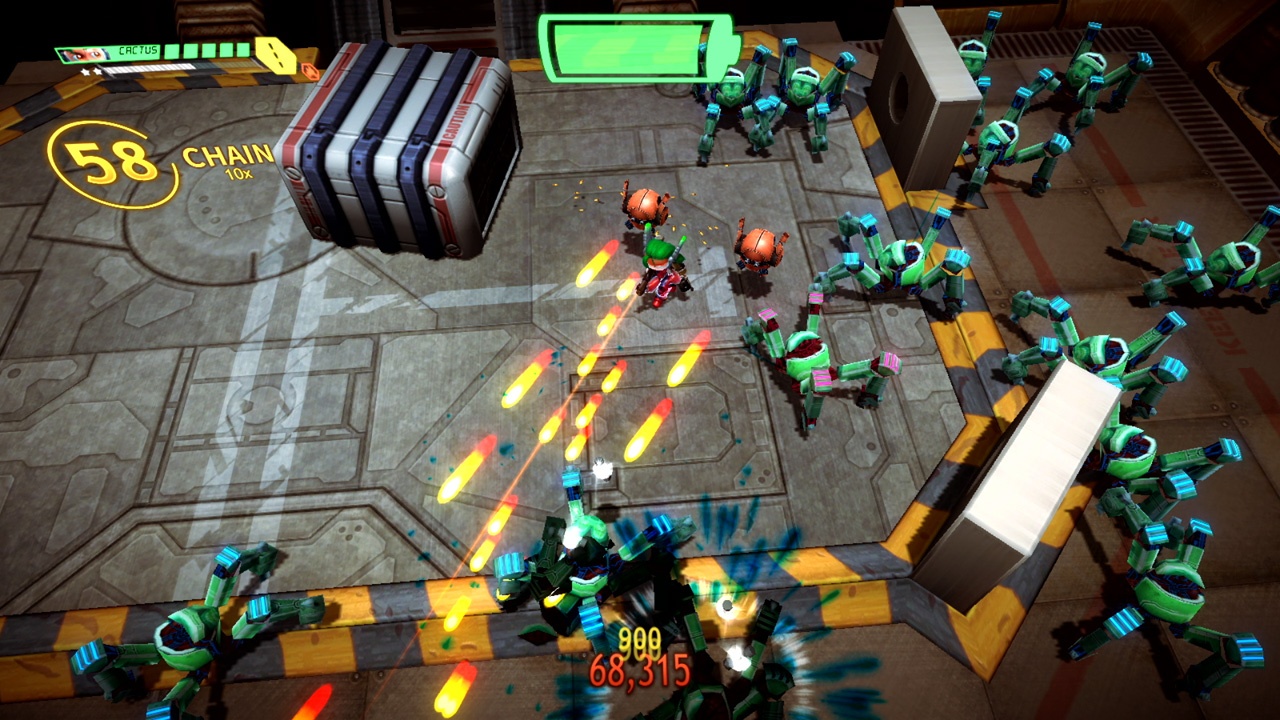 Sometimes, when modern developers think about the “arcade” experience from yesteryear, they tend to only focus on the things that drove the industry from a profitable point of view. That is, to make the game incredibly challenging, simple, and relatively short. You see that a lot in “arcade shooters” that are released nowadays, where you can actually hear your mother rolling her eyes as she gets another quarter out of her purse for you to continue playing. But there was a reason that I wanted that quarter, and it wasn’t my own sense of accomplishment at having to finish the game. It was the FUN that went into the sometimes Herculean task. Do you think Gauntlet would have gotten as much traction if it were just about watching your NPC teammates shoot the food and die? It’s the fun, and, in some important cases, the friends you keep. Which is what makes Assault Android Cactus+ such a great trip.

There’s a story that’s important to establish why things start to happen, but it’s not needed to keep this twinstick boat of bullet love afloat. The primary character is Cactus, an android space cop who’s responding to a spaceship that sent out odd signals three days ago. After being attacked by the ship’s defenses and crashing through the hull, she meets other androids aboard the ship and gets the gist of the story. The ship’s core has stopped communicating, which means it’s probably gone rogue/evil, and it’s caused the four Section Lords of the ship to also go ballistic. The only means of bringing about order on the ship is to defeat the four Lords, get to the Core, and talk some sense into it, presumably with bullets. Interestingly, the androids, as independent robotic forms, haven’t been affected by the Core’s defection, so they join Cactus’ crusade to save them, and reveal they’ve got some pretty serious firepower as well. Banding together (sometimes four at a time), this colorful, plucky group will surely take back the ship, or explode several times over trying.

The mechanics of Assault Android Cactus+ are what make the game a treat and a really intriguing jaunt with multiplayer. You have your two basic weapons, a primary with unlimited use and a secondary with some cooldown tied to it as it can arguably do more damage in less time. The swapping weapons button is also a dodge mechanic, leading to both some very cool and very awkward moments of rifling through your gun catalog while also trying to stay alive. As you play on, enemies will drop three things: power up gems, temporary boosts, and batteries. The power up gems gradually charge up your primary weapon till it hits maximum effectiveness, which lasts till the end of the stage. The temporary boosts can be anything from a sudden burst of speed to additional guns to the incredibly helpful (except during boss battles) EMP that disables all enemy robots for a period of time. But the battery is the cornerstone to the game. As you play, your battery gradually runs down, because you’re a electronic being. If you take too much damage, you go into hibernation mode, lose your powered weapon, and need to reboot yourself, which takes a burst of energy. If you run out of battery, that’s it, game over. Now imagine you need to keep this in mind for everyone on the screen, and things get wild. 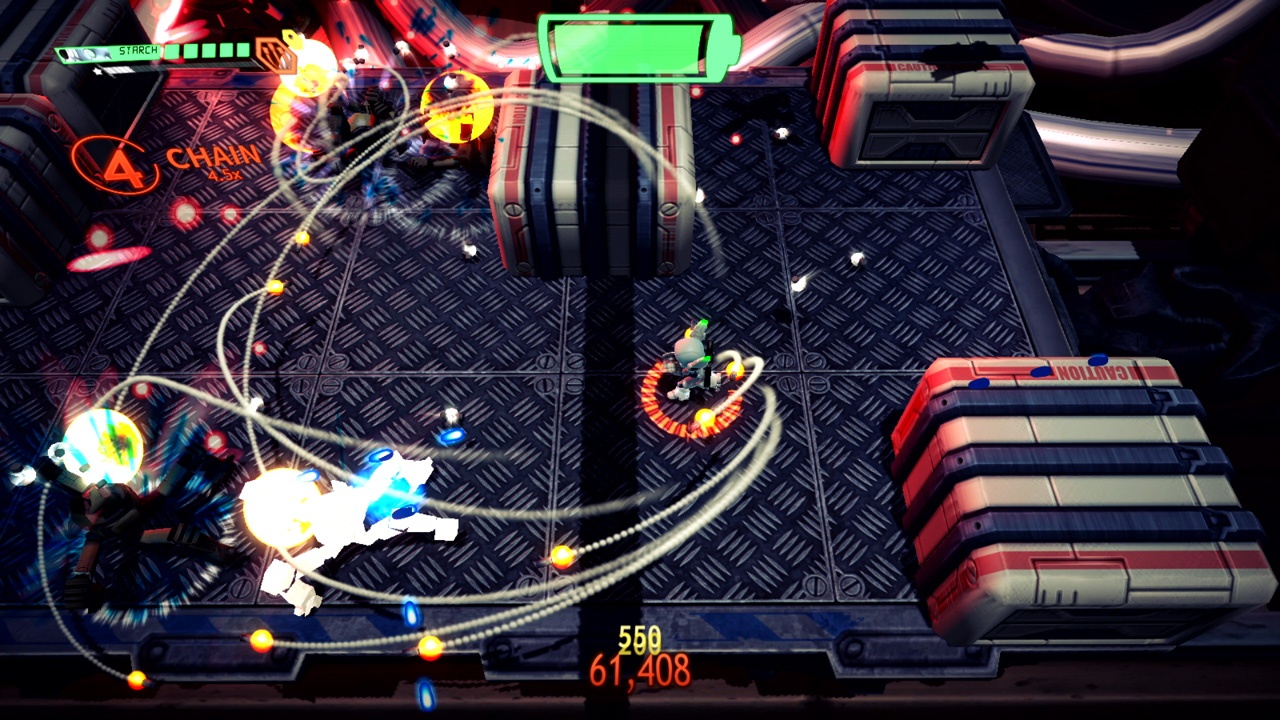 Each of the Androids that you encounter throughout the game has a different set of abilities, and you’ll seriously want to play through the game at least once to see everything they have to offer. When it comes to solo play, I feel like there’s nothing better than Cactus: her primary weapon has a good mixture of power and range, whereas her secondary is phenomenal to help clear out tight spaces, which you’ll encounter a lot of without additional help. However, if you’re even doing two player, it’s important to see how your partner fairs in style to pick something to help balance them out. Having someone who can basically hang on the outside and play Holly can help a ton with picking off minor mobs and then getting a killer shot in with her cannon, whereas Coral’s plasma field does wonders with swarms of robo bees that always seem to come in. There are also five unlockable characters that come from boss defeats, and I don’t want to get into them too much, because they are meant to be sort of surprises for newcomers. I will say this, though: if you meet someone who can play Aubergine properly, marry them. You want a person with that kind of mental acuity and balance in your life for all time. The point is that the game doesn’t necessary get easier with more people on the screen, but it does get a lot more fun.

In terms of difficulty and enjoyment balance, Assault Android Cactus+ runs a very tight line that can be easily tipped if you’re not careful. The first couple of zones ramp up progressively, allowing you to get a feel for what’s coming and how to help better balance your life. A majority of the stages let you stay alive by the age-old approach of “run and gun.” If you can keep moving, don’t get pinned down, and can prioritize enemies based on your kill chain (gotta keep up that score multiplier!) then you’re totally set. Getting S ranking on the stages should be easy enough (S+ can go straight to hell) as long as you understand the importance of switching to your secondary and giving the boosts time to cycle between their abilities: don’t get a speed boost when you need an EMP. The bosses, by contrast, fall way more into the bullet hell sort of shooter, and you gotta be able to keep a bead and keep moving at the same time so that you can maximize your damage without getting slaughtered. However, once you cross into zone three, things really go up a notch. There’s this room-sweeping laser that indiscriminately blows up anything in range, and, once the crates you can hide behind turn into robots, you need to be fast on the dodge button if you want to even survive long enough for the next battery to drop, much less get a higher ranking. You’ll get to zone three by luck alone, but moving from here to the Core takes skill and, honestly, friends.

The plus tag on this edition of Assault Android Cactus is a nod to some fantastic overhauls that have happened to the game since the original inception. This is the third time I’ve played this game, and it’s far and away the best version I’ve handled so far. My Steam version was hindered by my computer’s performance, so I can’t fully weigh in against that one. The version on my XBox, however, would occasionally chug when there was too much going on, be it bots or bullets, and it would cost my life more often than not. However, I can say, going from the intro crash all the way to the showdown with Medulla, I had no issues whatsoever with this game. Moreover, not only did the title perform well with what was going on in the foreground, it was the background that really won me over. I could disable the leaderboards from the very beginning, meaning that I could take this game wherever I went and play with people on the road and not be bugged about being offline. It’s awesome to see level by level boards with global competitors, but I’m a goddamn lone wolf, let me play in my own ecosystem without being reminded that other people exist. Thank you, Witch Beam, for this little joy and victory. 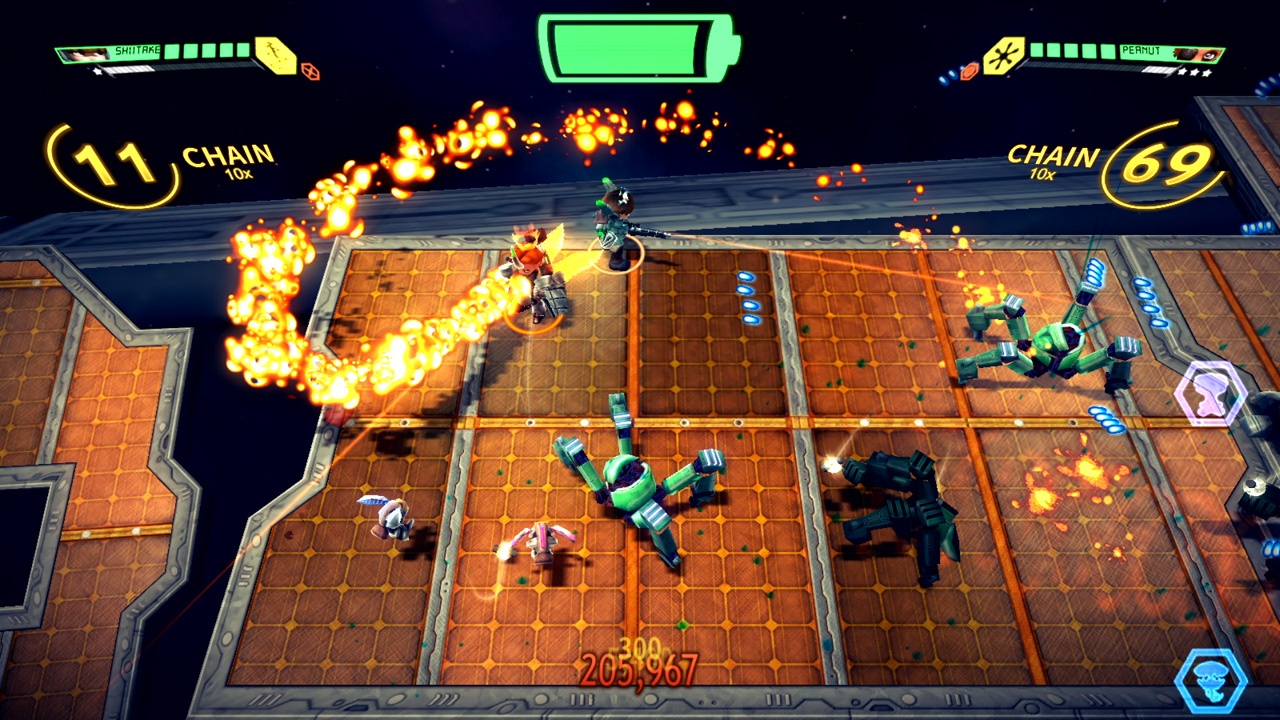 The plus mode campaign is also a neat little benefit to newcomers and old players alike. Far from being a brand new take on the whole game, the remixed stages include a higher density of one time enemies that you might experience elsewhere popping up all over the place. For example, there’s a particularly buggery tower that you run into in zone four that you thankfully never run into again in the primary game, and then, in campaign plus, they’re all over the damn place. It’s a great challenge as long as you’re comfortable with your abilities in the main game. Probably a good reason why it’s locked up and hidden until you beat the campaign once.

Additionally, being able to add creator commentary to the game was a lot of fun and some great insight behind boss, android and level design that was excellent for a long time player such as myself. Plus there’s the extra costumes, the EX perks that you can unlock for non-leaderboard fun (the first person camera made me so sick, it was awesome), and much, much more. I don’t want to undersell the love that Witch Beam put into the Switch version of this title, but goddamn if it isn’t clear that they took a shine to this system. The best part is that the game doesn’t ask for much in terms of install space or price, either. It’s comparable to where you’d pay on other markets and you get way more bang for your buck than getting vanilla on Steam.

This is all a long winded way to say that Assault Android Cactus+ does what every great port should do when it comes to the Switch: it brings the best, sheds the worst, and adds just a bit more to help you want to buy it again. For some titles, there doesn’t need to be extra, and this game could have done just spiffy launching, as is, and optimized, on the Switch. But the extra love and detail means that Switch players who’ve tried this before are going to love the new version, and first timers are going to be stunned by what’s available for them. This is one of the first can’t miss titles of 2019, and I’m really glad that Witch Beam Games is deservedly, proudly, wearing that crown.

This is one of the first can’t miss titles of 2019, and I’m really glad that Witch Beam Games is deservedly, proudly, wearing that crown.