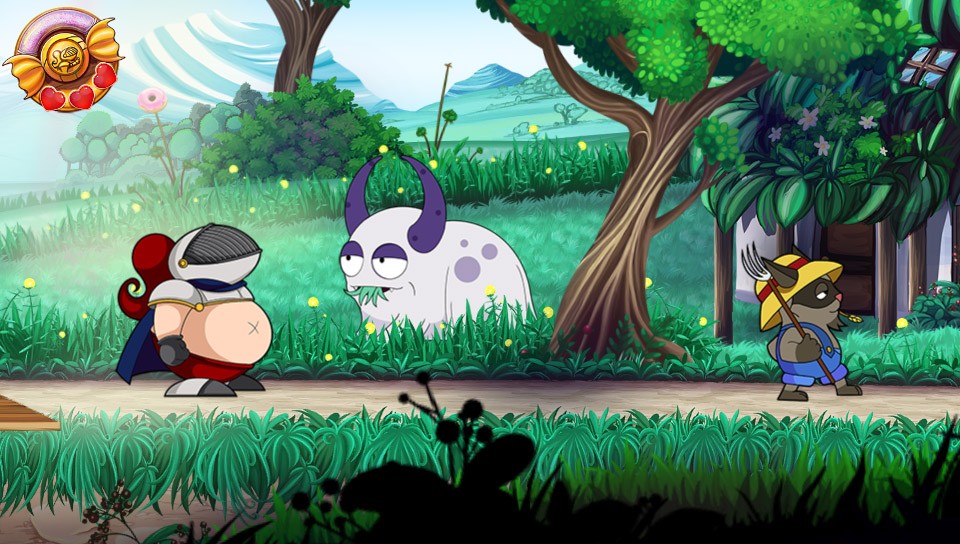 You can’t always have your cake and eat it, and with the gluttonous pig Sir Eatsalot, while you can be well-drawn and pleasantly animated, the gameplay very much refers back to the title character and is a bit of a pig in places. Harsh, but Sir Eatsalot isn’t the shining knight you’ve been waiting for.

Let’s cut to the chase straight away and cover the visuals: Sir Eatsalot is a treat. All of the characters are hand-drawn and unique in that they don’t look like any particular style. There aren’t any doe-eyed anime characters, blocky pixelated faces or ‘inspired by’ Disney, Dreamworks or whatever-studio-is-currently-trending features. Sir Eatsalot is quite special when it comes to style. To give a brief comparison, I would put Sir Eatsalot in the same league as the revamped Toki or Wonderboy: The Dragon’s Trap.

There have been a reasonable amount of cartoon-like games in the past that look fabulous, but play like Call of Duty through dial-up; choppy frame rates and sloppy animation. One of the best examples was Dragon’s Lair Trilogy. The series had top quality illustrations and animation, but it wasn’t exactly playable (yet I still love it) as often it’s style over substance. Arguably, Cuphead is the ultimate in ‘playing a cartoon’ due to the top-notch character design and animation. Sir Eatsalot isn’t as fluid, but the animated side of things is splendid. But let’s look at the controls.

Even though the presentation in Sir Eatsalot is great, the controls aren’t as well-executed, and the actions are limited. Sir Eatsalot looks like one of the classic 16-bit platformers like Castle of Illusion Starring Mickey Mouse (don’t say you don’t learn about retro titles here on Bonus Stage!) but it doesn’t have the same flexibility. It’s more of a puzzle adventure with platform elements, rather than a full-on platform game. There are chasms to jump and platforms to ascend, but considering the characters perceived weight, he doesn’t move around the screen so elegantly.

In the very early stages of the game, you will have a few generic gaps to jump. They’re not so big, but as Sir Eatsalot isn’t exactly Michael Jordan, he’ll miss the mark. These jumping elements aren’t supposed to be an issue (right?), so they can be tackled if you’re patient and take your time. I’m a patient gamer, but I found that I got a bit restless and wanted to make progress instead of fumble around from one location to another. Sir Eatsalot can dash with a double-tap (which consumes stamina points), but it’s in sporadic bursts. Alas, I found out the hard way trying to attempt a long jump only to stop sprinting split seconds before the jump. 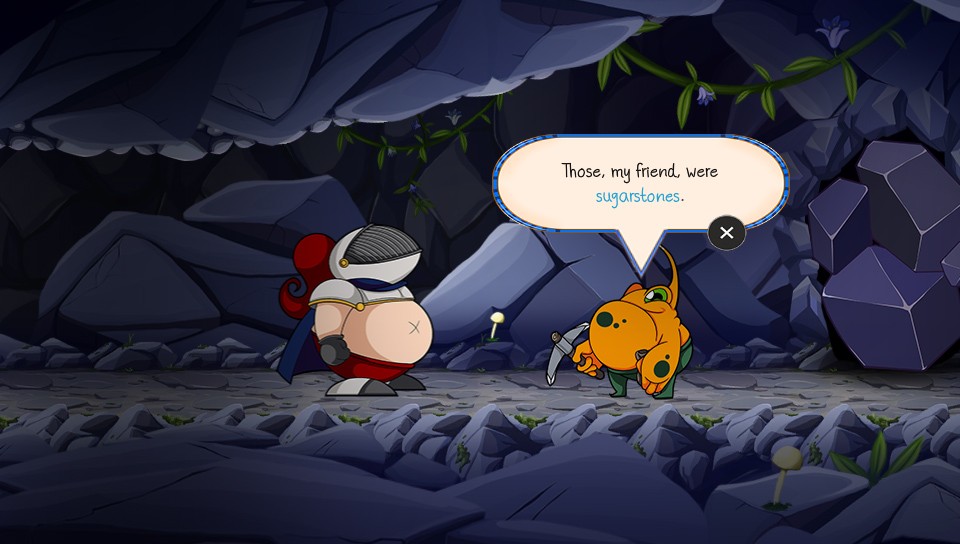 Just a quick note on the plot. An evil sorceress, named Hysterica, is working with the Rat Clan to overthrow the Kingdom of Gluttingdon. Instead of an all-guns-blazing attack, she poisons their source of isotonic water with sour lemonade. The King hires you, Sir Eatsalot, to locate an antidote and save the people. Simple.

Sir Eatsalot is a knight, so he should have some form of weaponry. In the game, you carry a sword and shield. They’re perfectly serviceable, but don’t expect any combos or strategies other than hit and run tactics. You can use the shield, but the response time for the character isn’t so sharp, and I often found that I’d get hit. Worst of all, you can’t jump attack, which is a bit of a letdown.

A redeeming feature though is the abundance of health items. It makes sense why Sir Eatsalot is a big guy. He’s always eating. Despite the enemies taking off health or you falling down a gap for the 100th time, you can collect candy berries or fully cooked chickens impaled on the roadside to replenish your health. To pick them up, you click the touchscreen. I have to add that Sir Eatsalot is only playable in handheld mode, mostly because you have to interact with your surroundings; click on food, tap away at obstacles in your path and be interactive with the inhabitants of the land.

Focusing on the touchscreen element, you obtain a sticker pen early in the game. Its purpose is for you to build an encyclopedia of sorts of the creatures you encounter during your play. A silhouette appears onscreen, and you need to trace the outline to unlock the sticker: elementary stuff, but a bit of fun to do.

The touchscreen is needed for boss encounters. The first boss battle, in particular, was a bit of a chore as it solely relied on touch screen input and wasn’t fun. As the enemy attacks you, swipe left, and you’ll dodge the attack. Each time he takes a smoke on a cigar you swipe right to attack, and in the event he calls a wolf to attack you, you swipe up to jump it. It’s all very slow and methodical, and it took me a couple of attempts to do it. Not because it’s hard, but because it was dull and I was getting impatient. Thankfully the first boss had the same health like me, so three attacks later and I gratefully moved on. 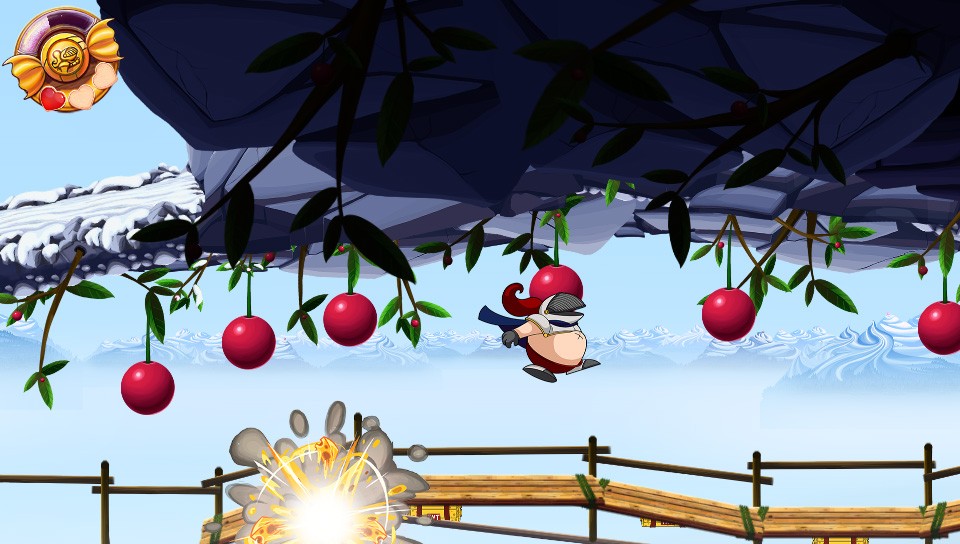 What I felt Sir Eatsalot needed more of, were sound effects. The score is marvellous and similar to any run-of-the-mill RPG or fantasy game, but the sound effects are severely lacking. I wasn’t expecting the game to be fully voice-acted, but it would have been nice to have had the odd grunt from the lead and supporting characters – even if it was a bit generic. The score is suited to the game, but it doesn’t feel like the two are connected. An improved range of sound effects would have helped them gel together.

As a text lead narrative, I was pleasantly surprised by the dialogue. Though it isn’t exempt from the odd cheesy line and cliche, it was well written and entertaining enough where I wasn’t skipping it. It’s not that the narrative is so captivating, but there are moments where it’s quite witty and made the experience more enjoyable.

In terms of presentation, Sir Eatsalot is marvellous. Aside from my earlier remarks about the character design, the backgrounds genuinely are great and one of the best examples I’ve seen on the Switch. I would say that the game is let down more on the gameplay more than anything – in particular the touchscreen method.

I do like the fact that Sir Eatsalot makes use of the touchscreen, but when you become reliant on it, it doesn’t make so much of a memorable experience. Locating interactive parts within the scenery and tapping on obstacles is a nice touch (not an intentional joke), but the sections that relied on swipes were disruptive and slow.

For the first couple of years of ownership, I seldom played the Switch in handheld mode, but of late, tend to favour it. However, the continual switching back and forth from the buttons to the screen was a pain and would probably be best suited to tablets or large-screen mobile devices that don’t have the physical buttons. In other words, taking into consideration my preferred style of playing, I didn’t like being limited to handheld mode. When playing this on the Switch, some of the touchscreen elements were quite possibly the weakest part of the game and it felt like a bit of a slugfest unnecessarily.

An even more loveable version of the Onion Knight from Dark Souls, Sir Eatsalot is a charming adventure game letdown by the touchscreen specific parts. As for presentation, it’s one of the better titles, but be prepared to exercise (fat joke) a bit more patience than usual as the game is slow-paced.