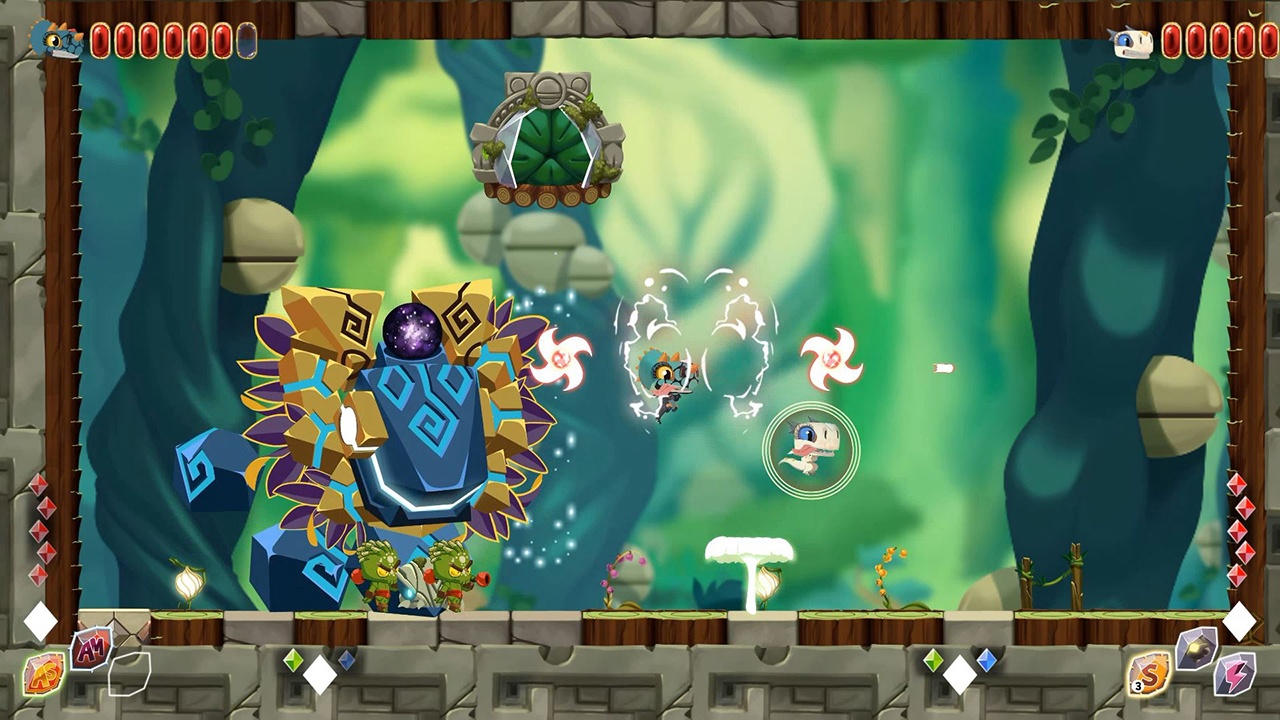 There’s always this lingering pain when you see something that you know was SUPPOSED to be good. Recently, I watched The Greatest Showman, and I know, I KNOW, there was potential there. Hugh Jackman was singing, the concept was cool, the score was good, but it just never quite got there. It’s because it wanted to be a Baz Luhrmann film, and, guess what, he wasn’t directing it. So it never quite got to the amazing, colorful, sweeping kind of state that fans expected. It hurts because you can see where they were trying to go, but it never quite made it. That’s exactly how I feel with DragoDino.

DragoDinos are these weird little monster animals that inhabit some kind of lust, jungle planet far away from us. They’re shrunken dinosaur and dragon hybrids that are meant to be cute but they kind of feel off, like when you get a knockoff toy at the dollar store. DragoDinos have eggs that hatch, and it’s supposed to be this joyous occasion, but *gasp* an egg was stolen, and now it’s missing! The father and mother, Bob and Lola, set off to get the egg back from atop a mountain, where it was definitely taken by some nefarious jerkface. Fight through ten levels and get to the top to rescue your egg!

DragoDino is a bizarre little roguelike platformer, and the purpose is pretty clear for each level. You have to scale, vertically, to get to the top of the level, but you need gems in order to do this. The special blue gems you need are held by random enemies, who have a glowing aura to indicate that they have the gem. Shoot them (because that’s your attack, obviously) and get the gem, which lets you power jump. You usually need to power jump to reach the gem gate, and, as soon as you pass through it, you lose the gem(s) you have and need to do it over again. Each gem extends your power jump, so if you need a buncha gems then good news, you’ll find them eventually. There’s also this whole thing with floaty gems that will randomly give you items that can passively and actively help you, and sometimes there’s coins, etc. etc. There’s actually a lot at play here, and I’m gonna try and break it down the best I can. 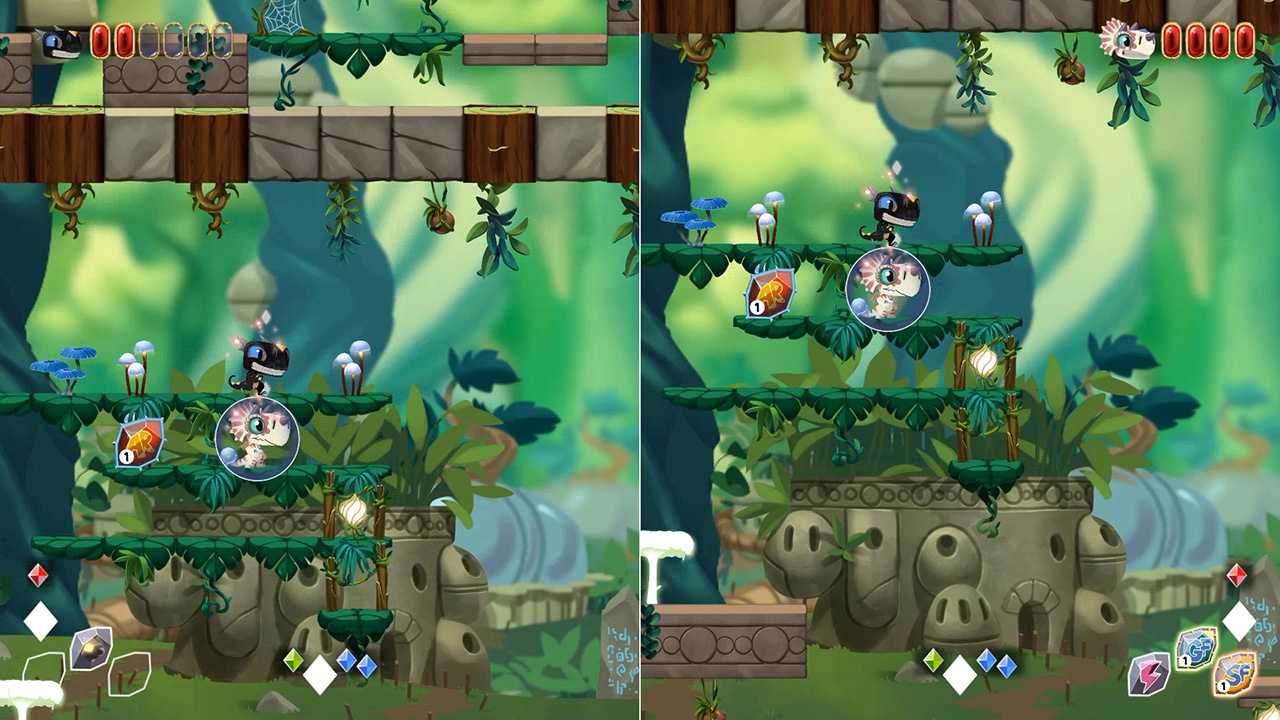 First and foremost, DragoDino is goddamn hard. Like, genuinely, unrelentingly hard. The button configuration, which cannot be changed, asks you to run around, jump, grab things, do things, shoot things, and for some reason the confirm button is X, the top of the JoyCon. Was this done just to be different? I’m running with ZL, shooting with ZR, my super jump is Y but my regular jump is B, and A just kind of takes a break? I can shoot down, through the platforms, but I can’t shoot up, because screw you. The easy mode gives you three lives and that’s it. Hard mode gives you one. If you get touched, you lose a hit point, three times and you’re dead. The monsters all move right at you at a bunch of different speeds, and there’s a huge variety of baddies that get increasingly hard. They go from “sitting there” to “shooting shit at you” to “I can basically go invisible and then reappear to stab you. Nothing personal, kid.”

So this isn’t a game for kids, apparently. Fair enough. So why does it feel like one for kids? The colors are bright and bubbly, the cartoonish design of everything is incredibly childlike, and the music is basically bubble gum in your ears. I checked on Steam, and DragoDino has a shockingly low number of installs, so this game isn’t particularly well known or popular. Not a bad thing: TealRocks Studio (who has a surprisingly nice logo) is able to reinvent themselves on the Switch, sales be damned. But the narration, visuals, everything just screams at me “for elementary schoolers!” Thing is, if I was eight or nine years old and kept dying as often as I did, I would have thrown my whole Switch in the trash. Because it doesn’t get easier. You can make it through the first couple of levels alright, but then the number of gems gets ridiculous. You get some new attacks, you learn to stack better power ups (the different kind of shields was cool) and I honestly did appreciate the way the game was procedurally generated. But goddammit it’s hard. 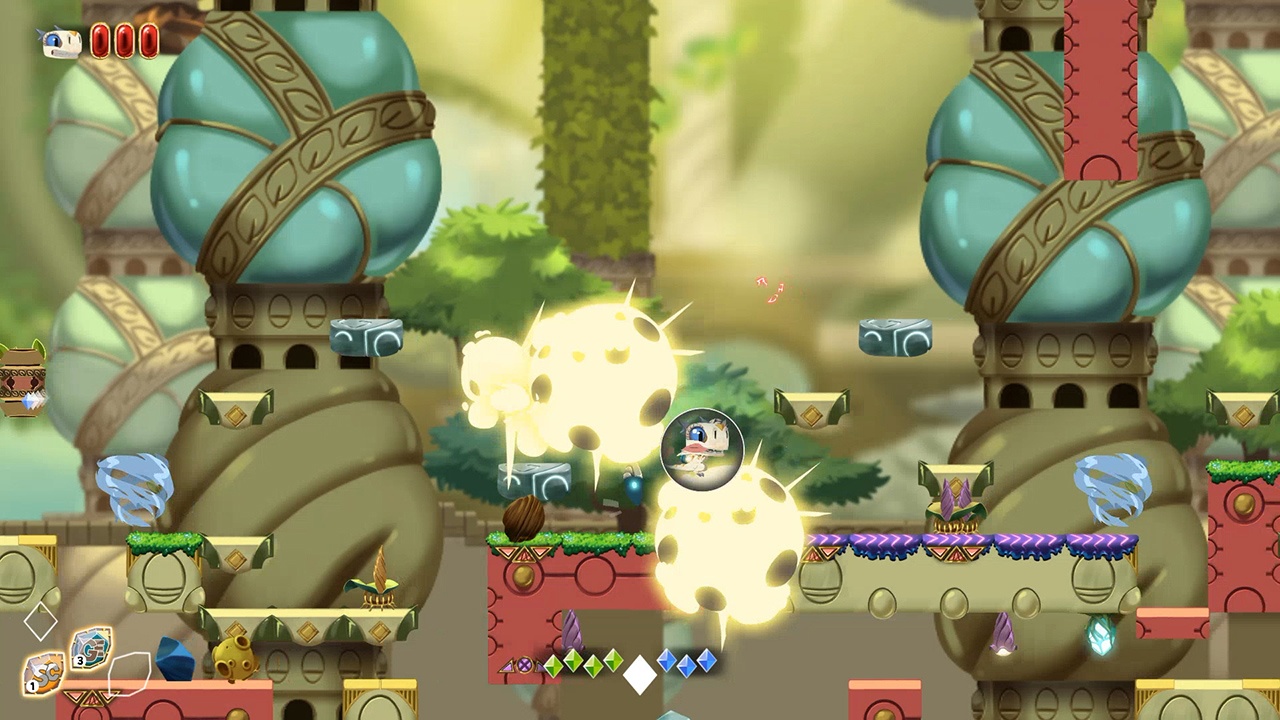 Now, here’s a really important thing. We’ve already have some crazy difficult games on the Switch. End is Nigh, Super Meat Boy and the like have already landed, so it’s not like a hard game is an instant loss. And roguelikes, shit, we got those by the bucketful, and I would never say no to another. Cute mascot, roguelike, hard game, what’s not to like? Well, TealRocks falls victim to the one, unforgivable crime with the Nintendo Switch: optimization. Players are willing to shell out a few extra bucks to get the same game again on the Switch as long as it plays well. Don’t Starve ran like a dream. Nearly every Nintendo branded game is fantastic. But when a game has performance issues, people flee from it like it’s on fire. Regalia, which has a lot of great points, suffers from constant loading screens. Those screens, though only a couple seconds here and there, are frequent, and distracting. DragoDinos doesn’t have nearly as many. But they are much, much longer.

That’s how long the average loading screen sits there and re-draws the egg loading logo over and over. You sit. You wait. You could the eggs. You sometimes get up and leave the room. There were a couple times I forgot I was still playing because I had put down the Switch and picked up my phone instead. There were times that were longer than that. There were shorter times, sure, but that was when I was, for example, choosing the level or choosing the difficulty.  When I actually wanted to PLAY, to sit down and activate the game, the load times were so insufferably long that I totally lost steam and interest.

If TealRocks is able to get this game a bit more under wraps and focused, this could be a fantastic addition to the roguelike crowd. Sure, it’s frigging hard, and I’m still on the fence as to whether that’s a design flaw or intentional, but I did like the parts that I played. The unlockable characters add an element of variety, and the collect-a-thon that exists within each level also adds to some replay value. Strategy certainly exists in terms of getting and choosing which of the power ups to hold onto, which to discard, and if you want to risk it all by dumping coins on a single power up or save it for the next stage. But the load time, combined with the alarmingly large install size (nearly 2GB) screams at a lack of optimization, and will ultimately hamstring any heavy suggestion for purchase. Keep this one on your wishlist and check in with the devs: if they can make this work better, it could be a great addition to the Switch (portable roguelikes are always welcome!). But, if we can’t get those load screens down, there’s no reason to rush out and buy this.