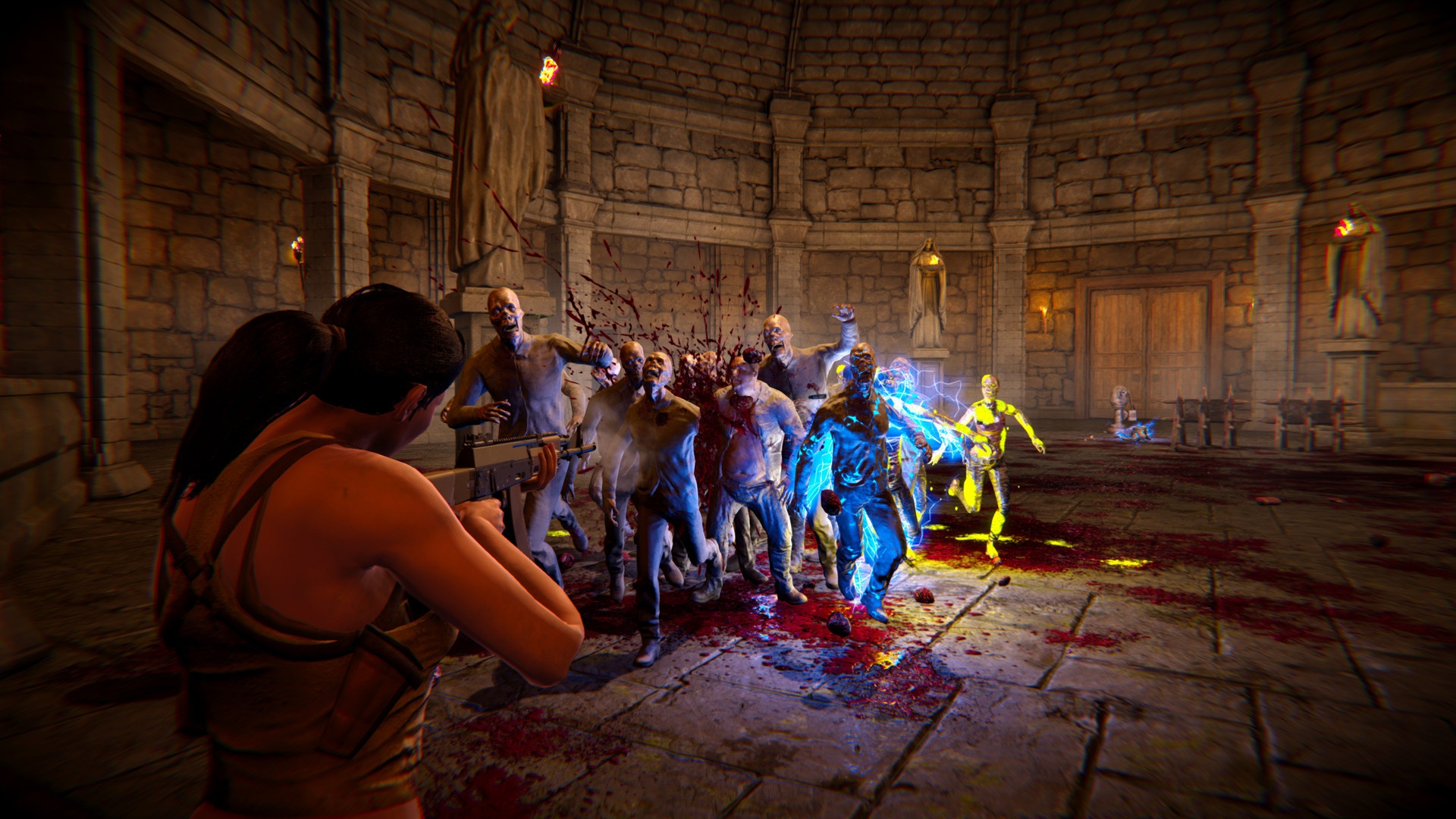 I feel sorry for the zombies of the world. You have to admit that in the world of video gaming, they have a pretty rough time. If they’re not being kicked in the ghoulies by Resident Evil’s Jill Valentine & co, then they’re being burned alive in Minecraft or worse still, being blown to smithereens in Call of Duty. I’m pretty sure that they’re merely just misunderstood creatures of the night. All they really want is a good meal inside them, after all, have you seen how thin and decayed they are? I suppose it doesn’t help that their staple diet consists of us though, does it? Well, the latest zombie-bashing title to crawl a release onto the Nintendo Switch comes in the form Sometimes You and Light Road Games’ Blood Waves. So, is this another zombie-infested video game that you can sink your teeth into?

In some ways, Blood Waves plays like a cross between Tomb Raider and Resident Evil’s Raid mode; but only in a very limited way. Any comparison to Lara Croft only comes in the form of the main playable character who bears an uncanny resemblance to our titular platform-leaping heroine and as far as the Raid mode goes, well it does contain a lot of zombie butt-kicking fun and a variety of weapons, but contains nowhere near the level of depth from Capcom’s mini-game. The reasons for this comes down to a variety of variables, making this a game that does hold a certain level of satisfaction, but in the end, its main body of execution simply misses a few limbs.

The main premise of the game is a simple one: survive for as long as you can against waves of zombies, using a variety of techniques and weaponry. In terms of gameplay, it can be a lot of fun. In terms of execution though, the game simply nose-dives to such a level, that the excitement soon wears off. It all lies within the design of the game itself and the limits imposed on the player that takes away any reward of good game play. The game begins with you locked in a room and from a third-person, over the shoulder perspective, you dispose of various waves of zombies as they infest your room from a series of surrounding doorways. Armed with only a pistol and knife, you shoot and hack-and-slash at the undead until the current wave ends. Once disposed of, you then leave the room to enter an arsenal of traps and weaponry that can be purchased through the collection of currency that can be picked up from the dismembered corpses of the undead. 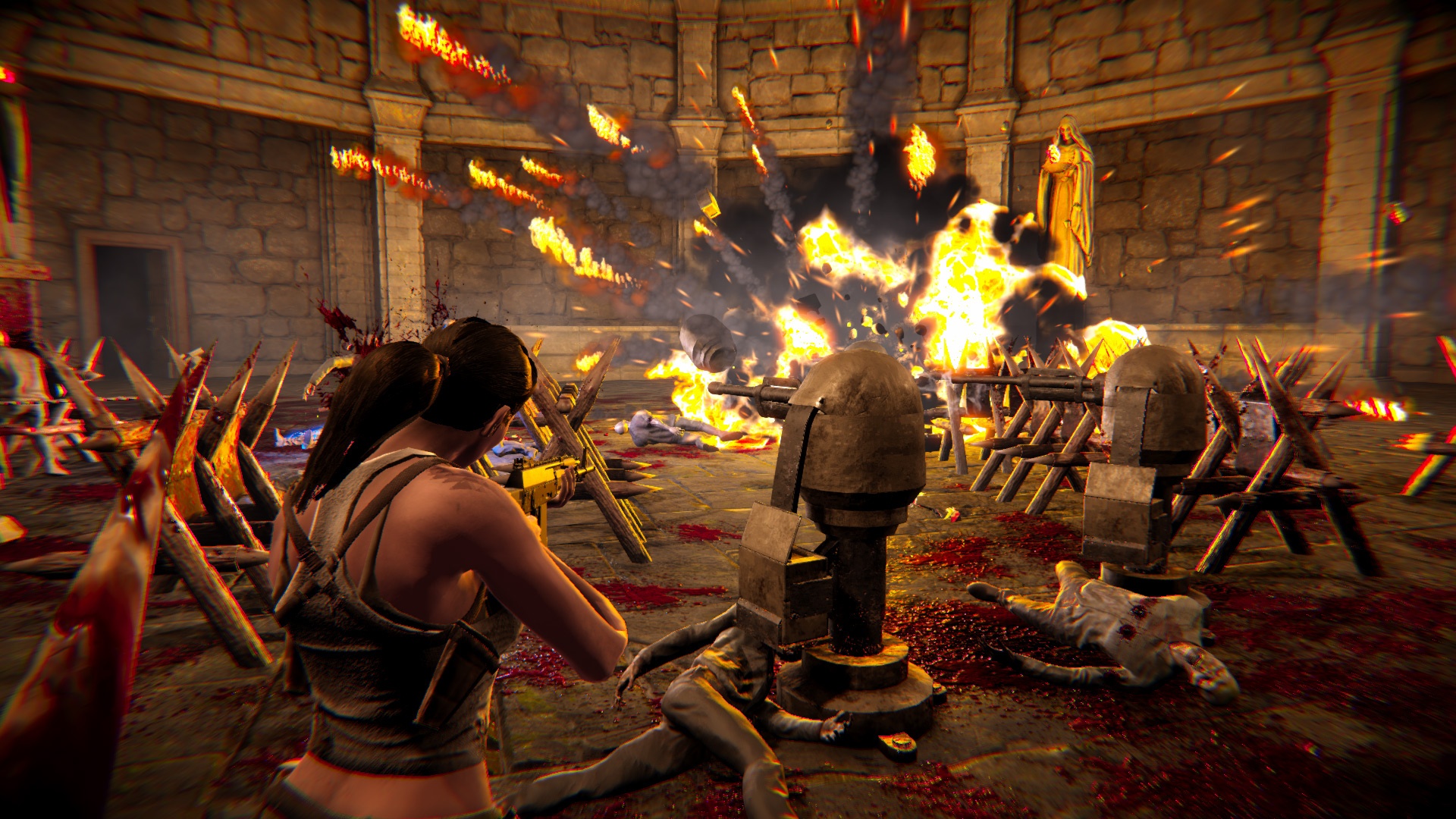 It actually plays a decent game, but only as long as you don’t mind the odd shallowness within the games you play. By this I mean that the room in which you combat the zombies remains the same throughout; meaning that there’s no variation in the locales of the game. Combat too, contains a mechanic that feels a little too simplistic and at times, off; especially within the aiming. It doesn’t take long to find a simple rinse-and-repeat formula of running away from the hordes, turning to let off a few shots or slashes of your blade, before running off to do the same thing again. It entertains for a while, but is a premise that soon wears off and feels tiresome. This isn’t helped by a rather dodgy aiming mechanic that never feels true; although it can be argued that it adds to the challenge.

What the game does convey well, is the blood-fest gore usually associated with a zombie apocalypse. There is a level of engagement and fun to be had from watching the ensuing chaos as blood splats freely, limbs fly and grind amongst the traps and explosions send the invading hordes to oblivion. However, due to the constraints of what is on offer here, again, it can grow tiresome after a while. The limitations of trap life and ammo counts forces you to return to the basics of combat and fight with just your knife, taking away some of the spectacular and gruesome kills that can occur. It just starts to feel tiresome after a while and in some ways, almost felt like a lazy game. I couldn’t shake the feeling that there’s an awful lot of potential here, but none of it has been tapped into effectively.

The second room of the game, the arsenal, is where you can equip yourself with bigger and better guns, as well as a variety of traps that you lay around the previous room to catch the undead unawares. There’s a nice variety of extra oomph within this room. The problem here lies in the expense of such items though, forcing you to grind your way through the levels should you want a shotgun or a rocket launcher; meaning that you have to eat, sleep rinse and repeat in order to try and the game more interesting. The traps can offer a fun alternative, especially from the satisfaction in watching them effectively rip your foes apart. After a while, they begin to degrade and your hard-earned currency is also needed to repair and upgrade their worthiness; making it even more of a grind to get your hands on that damned shotgun or rocket launcher. 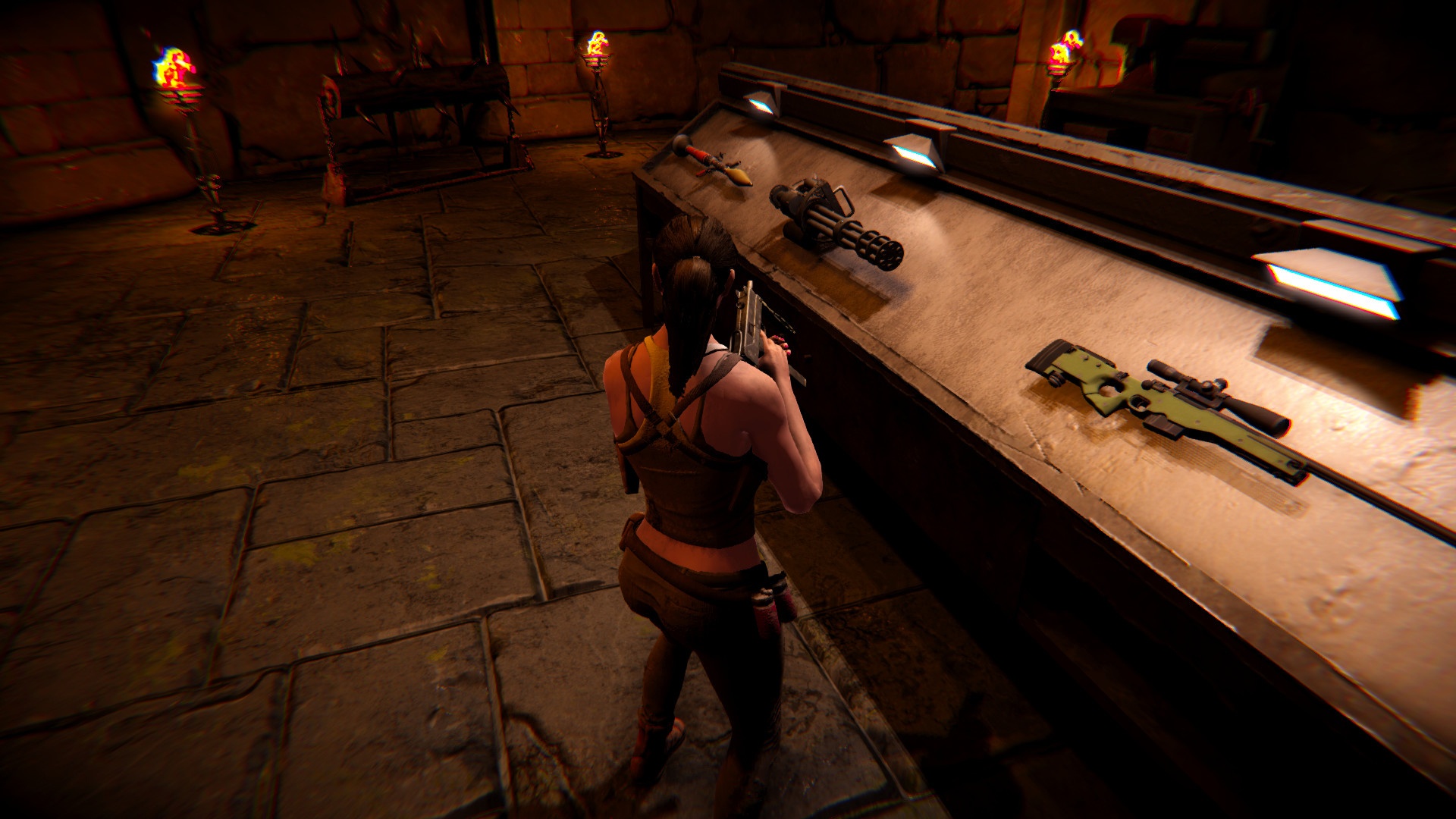 On paper, it’s a formula that should work to some degree of success. However, in order to attain the shiny, new weaponry, you simply have to keep fighting increasingly harder waves of zombies. This means that you eventually reach a point where you’re simple pistol, pocket-knife and worn out traps don’t do the job anymore and you meet a grisly demise; especially when faced with the slime-spitting and electrifying varieties of the undead. All’s fair in love and war they say, but here, once you meet your maker, the game simply restarts from the beginning. There’s no carrying over of funds, accrued weapons or traps. You simply start from scratch and soon feel underwhelmed with the lack of a carrot dangling in front of your nose for all your hard work.

It ultimately produces a disappointing experience that adds nothing to the long-term value of the game. In fact, the game makes you feel as if all of your effort have been a complete waste of time, which is a shame as, mentioned previously, there is some fun to be had with this game; it just doesn’t take long for the game to take that fun away from you. Yes, it does contain a certain link to Tomb Raider and Resident Evil, but they’re merely shallow references and doesn’t take long to work out that this is a game with zero depth. Like I said, it’s a premise that should work and it does, just not here though. It’s a style of gaming that’s been done before, it’s also a style of game that’s been done a lot better than what is on offer here. It doesn’t just apply to gameplay either, it can also be applied to the generic nature of the zombies, the overall blandness of the game’s design and lacklustre visuals and audio qualities too; oh, and that damned aiming mechanic.

Overall, Blood Waves is a game that looks the part in its screenshots, but it’s reality lies in a completely different dimension altogether. It can work in a casual capacity and does provide some form of entertainment, but like I said, it’s a style that’s been done before and also infinitely better. The lack of any reward for your efforts is simply disheartening and makes the effort of trying to attain the cooler guns and traps simply not worth it. After all, you may get your hands on a shiny, new rocket launcher, but you also know that once you die, it’s gone forever. Much like this title has from my Switch’s memory card.

A game that’s fun in waves and certainly contains a lot of blood, but its lack of reward makes it a waste of your efforts.