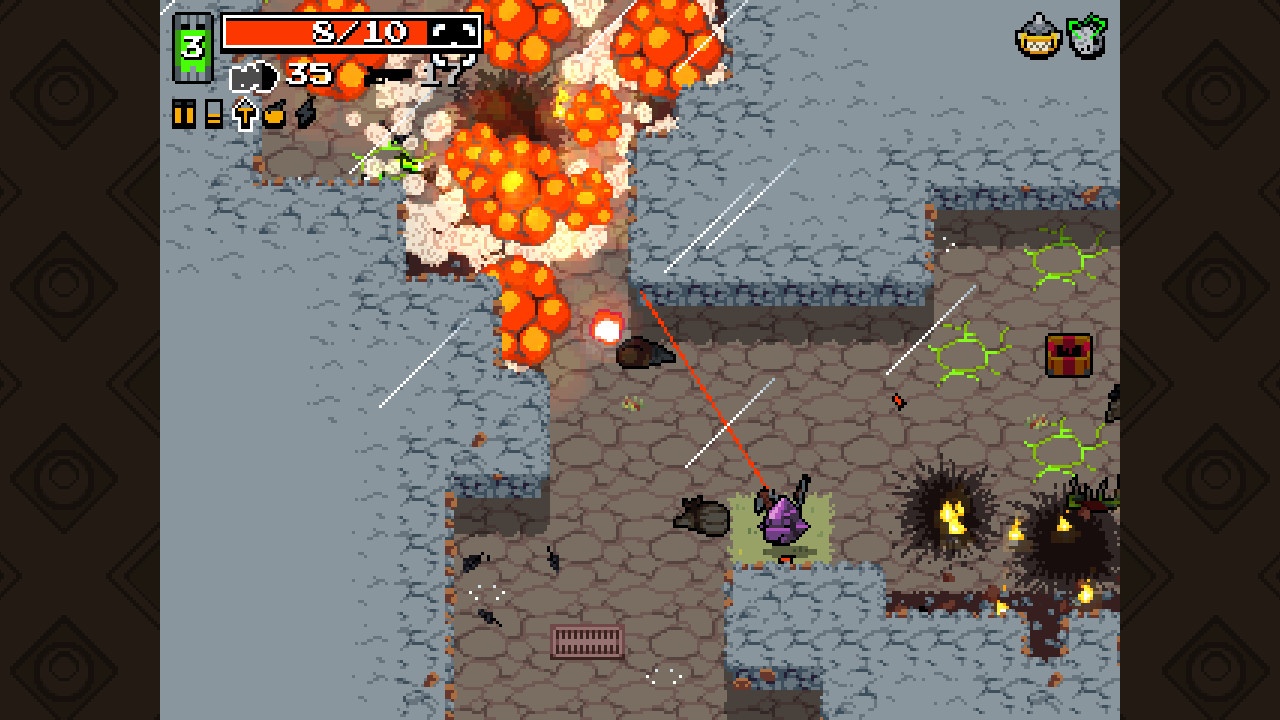 “Being a great baseball player does not translate into a great cricket player.” I hope to God no one has said that, because it’s a stupid quote and probably has little bearing in most situations. But, in the world of gaming, I think it has some credence. Whenever another game gets releases – be it simulation, fighter, RPG or visual novel – I try to go into it with the freshest eyes possible, although that can’t always be the case. My recent review of Shadow Blade: Reload may have suffered slightly because I was familiar with the genre and had played, recently, several games of like-minded substance. Still, a majority of the titles being released today can stand on their own, and usually stand apart. Cockiness, however, was still in my chamber when I picked up Nuclear Throne. “Roguelite twinstick shooter” is probably one of my favorite calls, and I’ve even dabbled, albeit briefly, with the game on a friend’s computer. Another day, another gear of grinding for the procedurally generated bullet hell to come. What could be different?

Nuclear Throne, coming to us from Vlambeer (of Ridiculous Fishing fame), and it skimps on the plot because, hey, who really needs it? The idea is that you’re one of several mutants (two available initially, many more to unlock) who struggles to get through a post-apocalyptic wasteland and find a sense of purpose and rulership by attaining the Nuclear Throne, which is both a physical object that you can sit upon and also the final boss of the game. Oh, and there’s a lot to deal with between you and the Throne. Unlike many other twinsticks, a full run of Nuclear Throne could conceivably take at least an hour, maybe two depending on your play style. Along the way, you can pick up additional weapons (each with different ammunition typing), and, by gobbling down nuclear rods, you give yourself mutations that affect how things look going forward (higher hit points, better damage, ammo regeneration, etc.). 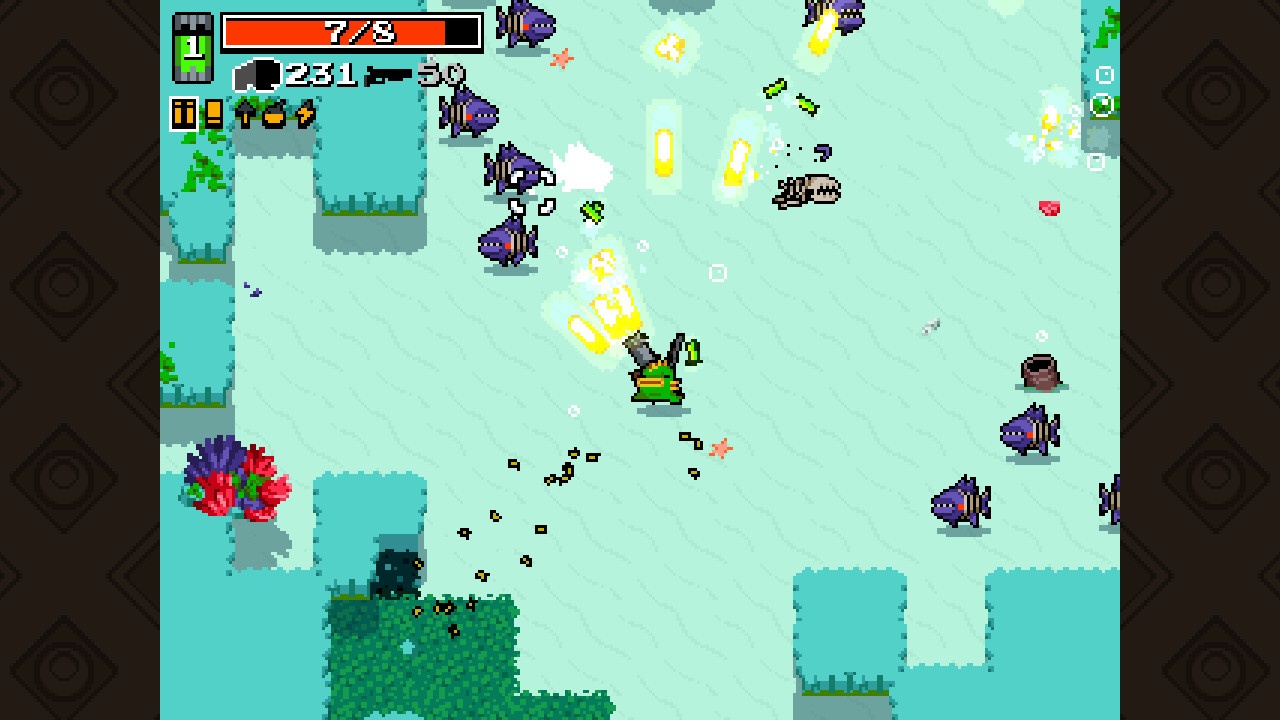 Nuclear Throne, on a very surface level, seems straightforward. Each mutant has an ability to go along with their persona, and the ability deeply affects the way that you can approach the game. If you can roll out of the way of bullets and explosions, you might be a bit more daring and attempt a full frontal assault of everything that comes at you. If you can make corpses explode, you might do a stealthier approach by picking off one dude, waiting to take out another with his body bomb, and then gradually chain things together so that the dead kill the dead (and keep you alive, since you have a very low starting HP). As you move along, the different weapons that you pick up also dictate your play style. Things like an assault rifle can spray down the whole room but eats up ammunition like potato chips, so have a good way to regenerate bullets in your back pocket. Crossbows and laser pistols take a long time to reload, so get those shots off accurately and take down enemies with minimal cross fire. And if you’re one of those psychos who feels confident using a melee weapon, good luck to you. I’ve never seen the appeal of trying to take down even a simple grunt with a screwdriver, much less attacking Big Dog. Best leave the hand to hand for another game entirely, at least in my perspective (unless it’s a chicken sword).

What gets the blood thumping in Nuclear Throne is the absolute bananas difficulty level that comes from just trying to get through the game. I won’t like that titles such as Enter the Gungeon reward players who understand the way to play, and Nuclear Throne is same, yet different. Enter the Gungeon feels like that teacher who comes in and seems really crazy and strict, but it turns out that he’s just nurturing you with tough love and the real lesson was inside you all along. Very Stand and Deliver, if you will. Nuclear Throne is like the fake teachers that come into Volcano High and want to murder students while pretending to be educators. However, if you manage to survive long enough to get to the end of the school year, now you get to be the teacher or something (Korean films are often confusing to me) and now the whole curriculum makes more sense because you’re in charge. Once you get to that Throne the first time, which could seriously take months of play, then the game opens up. But getting there…Jesus Christ, it’s a task.

That’s because Nuclear Throne is positively merciless about the harsh environment that it tries to impress upon you. You get two stages into the game before they drop the first boss on you who can literally dig through walls to get to you if you’re trying to hide. Then you’ve got a whole sewer level full of radioactive mice that run like crazy, turn corners on a dime, and occasionally explode into a toxic puddle that will sap your health. HP refills drop sometimes, but it always feels like it only drops because you’re seriously about to die, not because you’ve gotten slightly banged up and some refill would help you out. Meanwhile, I’m trying to see if I can catch enemies with my plant snares to keep them in one place long enough to get a kill in, but, surprise, they’re not the only enemy and no one is waiting their turn. Then you get to the junkyard with flying crow assassins, fire-spitting slug monsters, laser rifle assassins and, oh yea, the Big Dog that I name dropped up top, which turns the game from a freaking twinstick shooter into a danmaku hellscape. You do all this, you die and live and die again, you get all this way through probably close to thirty playthroughs (and character experimentation) and goddammit this is maybe halfway. 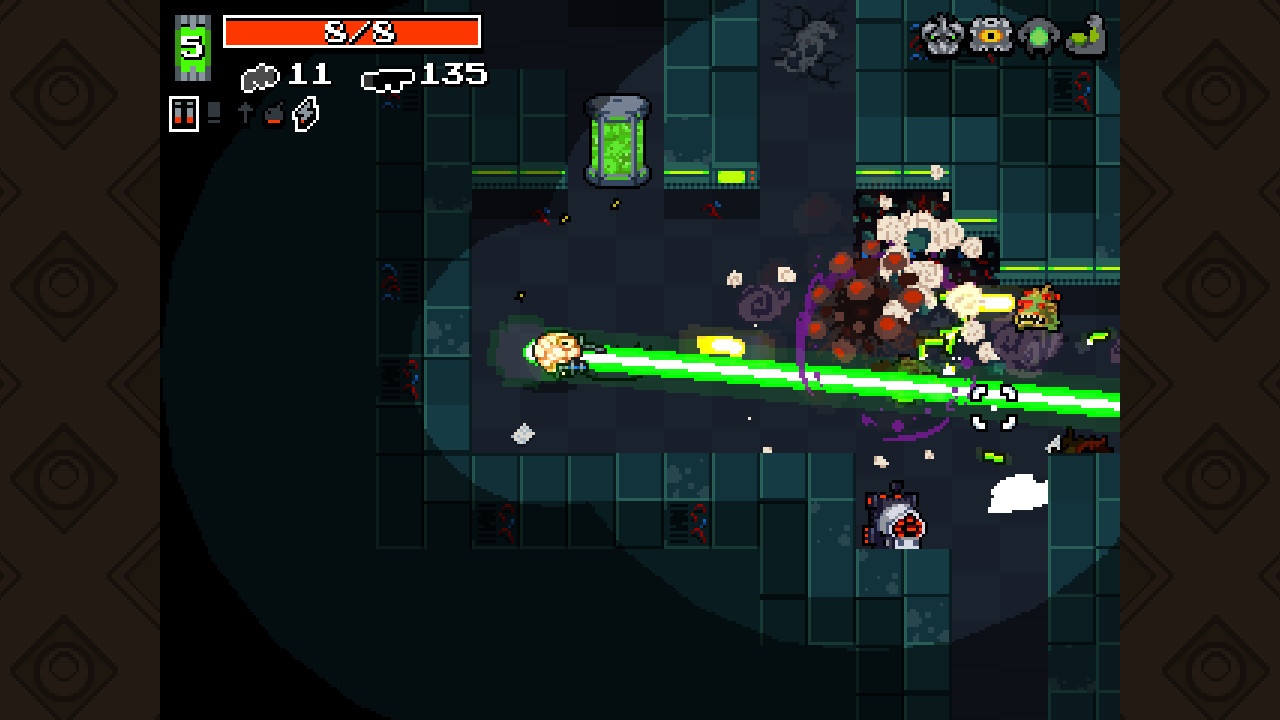 The pixel art style allows the game to run spectacularly on the Nintendo Switch, which is great because I had heard that ports to certain other systems were slow and choppy. Additionally, you need all the frames you can get with the explosions, the constant barrage of bullets, and the frigging nonsense of the Frozen City, where I’m slipsliding everywhere and still trying to have the poise and grace to murder everything. The character design is delightful, fully capturing the 80s ideas of what mutants looked like (I got a real Toxic Avenger vibe from some of this). Each level, through procedurally generated, has nooks, crannies, hard to reach spots and jerk enemies waiting around corners to really take you to task if you’re dumb enough not to have an explosive charge to toss into every place that isn’t easy to see and explore. The weapons are distinct enough that longtime players will recognize them before even picking them up, so you can swap around to what you need the most and grab what will be your second in command without wasting a lot of time trying to figure out what the future will hold. Hell, the only real complaint I have about the Switch port is the fact that it constantly, annoyingly tries to connect to the WiFi when I boot up the game and I’m on the road. Even when I’m in airplane mode, it yells at me, and I wish it would just let me get my butt kicked in peace. Still, easy solution is to never swap to another game and play Nuclear Throne forever.

Though there’s no apparent bonus content or hidden stuffs in the Switch version of Nuclear Throne, there’s still the same amazingly hard and rewarding gameplay at the core. There’s still a full set of crowns to choose from once you get far enough along. There’s still the hassle of getting beaten by the police because I accidentally shot the Proto Portal when I was aiming at something else (a little leniency, c’mon). There’s still a full cavalcade of characters to unlock and the secret hope that maybe more will come in the future, and more people investing in the game keeps this hope alive. If you loved Gungeon but hated how you didn’t scream constantly at your Switch, then Nuclear Throne is here to create a whole new league of frustrating nightmares.

Unlike many other twinsticks, a full run of Nuclear Throne could conceivably take at least an hour, maybe two depending on your play style.