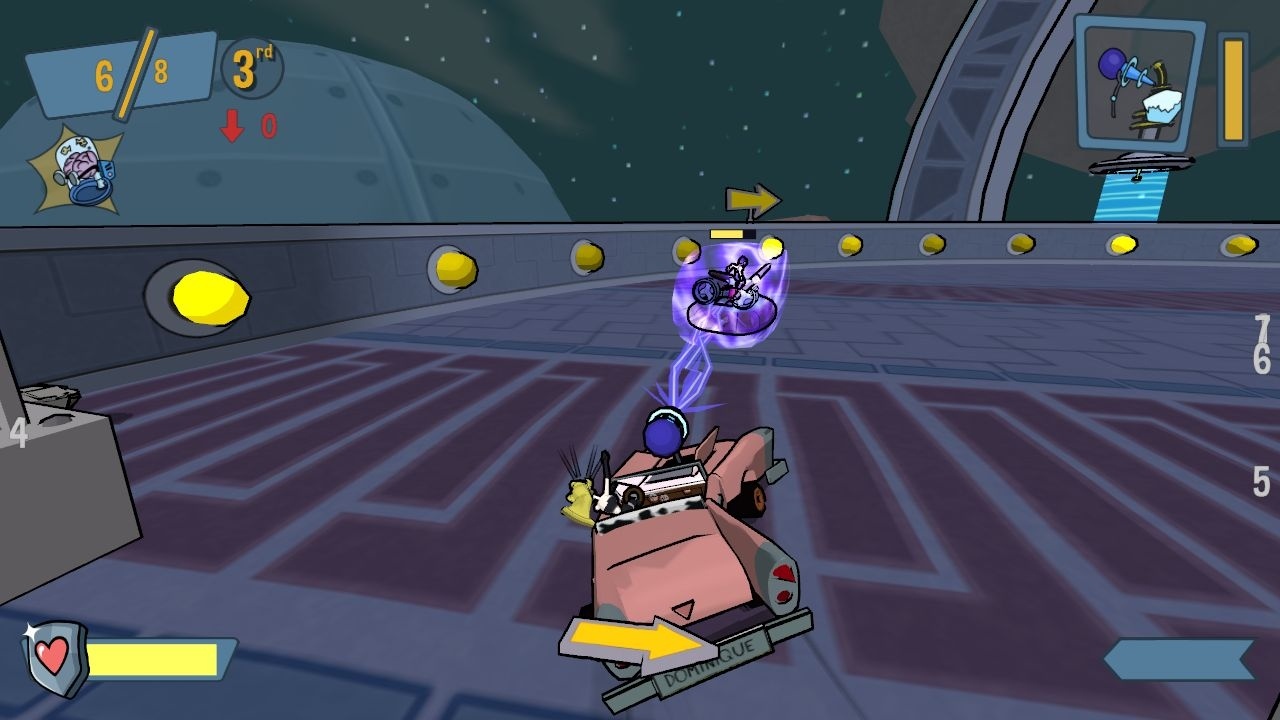 If there’s one thing that I have to take my hat off to with the whole premise of indie gaming, then it has to be its responsibility in resurging the once defunct couch multiplayer aspect of gaming. In the days considered retro, or the time before the internet, it was the only form of multiplayer available and is sure to hold some fantastic memories for the players of such an age; and yes, I’m one of those ancient gamers of a time gone by. Obviously, it can’t match today’s offerings of online entertainment, at least in scale, but in terms of pure enjoyment and for me at least, it still reigns supreme as the definitive multiplayer experience.

With the world-reaching possibilities that the internet brought with it, couch or local multiplayer gaming soon became extinct, but in recent years and largely thanks to the Nintendo Switch and its indie partnering, is a form of gaming that is beginning to find a whole new audience. There’s plenty of titles available these days on Nintendo’s console that caters for such a style of play, all of them with varying degrees of success. However, there’s now a new kid on the block, well in actual fact it’s a bit of an oldie, but is one of the original games that highlights perfectly how to do couch gaming properly. That game is Pseudo Interactive and Finish Line Games’ Cel Damage HD, a cartoon-styled, vehicular combat game that is as every bit as wacky as any of the Wacky Racers. So, without further ado, let’s catch that pigeon and see how the game fares now, over fifteen years after its original release.

As the name implies, this version of the game has had an HD overhaul with a more refined graphical presentation to bring a touch of modernity to it. However, the rest of the game’s mechanics and content largely remain the same; albeit with the odd bit of tinkering under the hood here and there. The main premise of the game revolves a series of arena-based bouts involving an array of vehicles and weaponry over a series of objective-based game styles. With six different characters and a few unlockable ones, thirty-two weapon varieties and thirteen stages, there’s plenty here to sink your teeth into; especially with each of them being playable over three different game types, namely Flag Rally, Smack attack and Gate Relay. 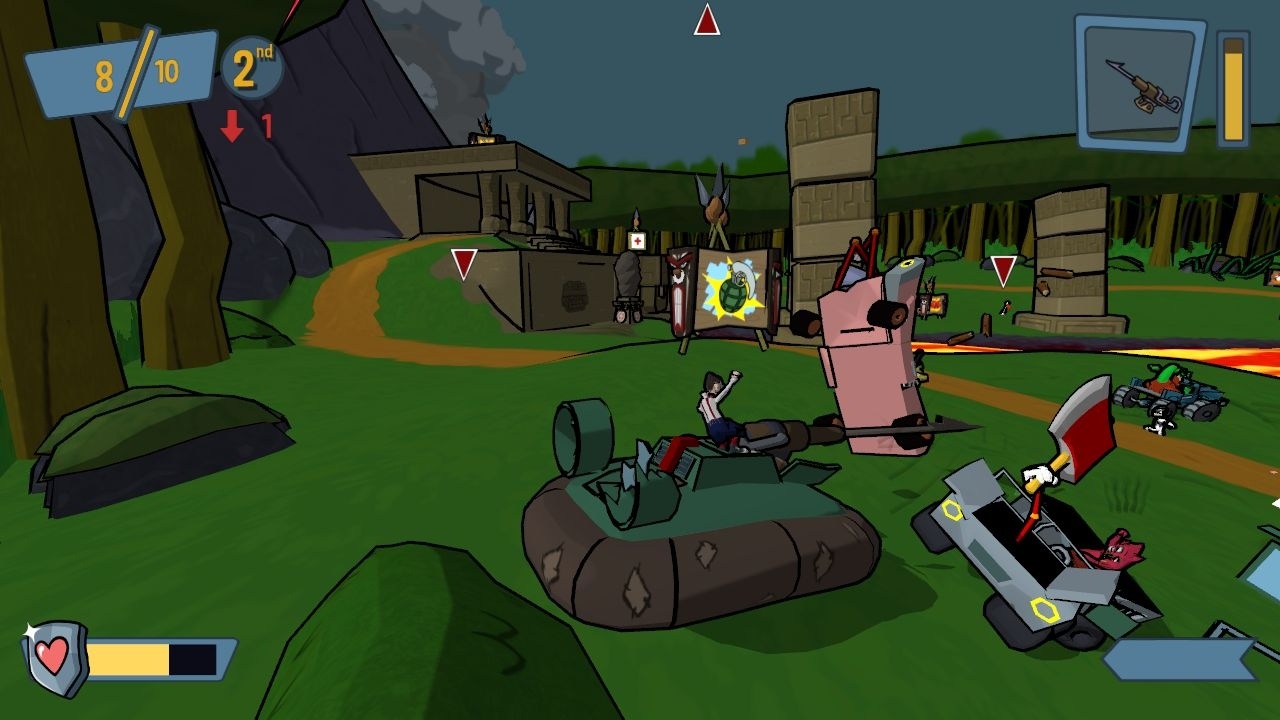 Whatever game mode you choose to play, they all follow the central theme of vehicular combat. Saying that though, each mode does feel distinctly different from each other and offers some good values in entertainment. In  Flag Rally, your task is to collect as many walking flags as you can from within the arena-styled level and drop them off at a designated location. However, the other competitors are vying for the same goal, as well as being hell-bent on your destruction with their armed vehicles. You too, of course, can also deal the damage, so all’s fair in love and war. Gate Relay offers a more racing scenario though a series of checkpoints whilst Smack Attack is an all-out, arena brawl and one that is almost in the same vein as the popular ‘Battle Royale’ style of games of today; although the highest score wins the day and not the last man standing.

Despite the variation in character, vehicle and weapon designs, each of them handle in pretty much the same way. The mechanics of driving and combat is suitably over-the-top and is one that matches the zany presentation and art-style of the game. It contains a cartoon aesthetic that wouldn’t look out-of-place within the settings of the Wacky Racers cartoon series and for the most part, plays very much like its cartoon brethren. However, with an over-the-top play style, the vehicle handling and weapon utilisation can feel a bit too loose at first. Its style does offer some good entertainment values, but at the same time can be frustrating at times, especially if trying to drive an effective racing line or lining up for a finishing shot. 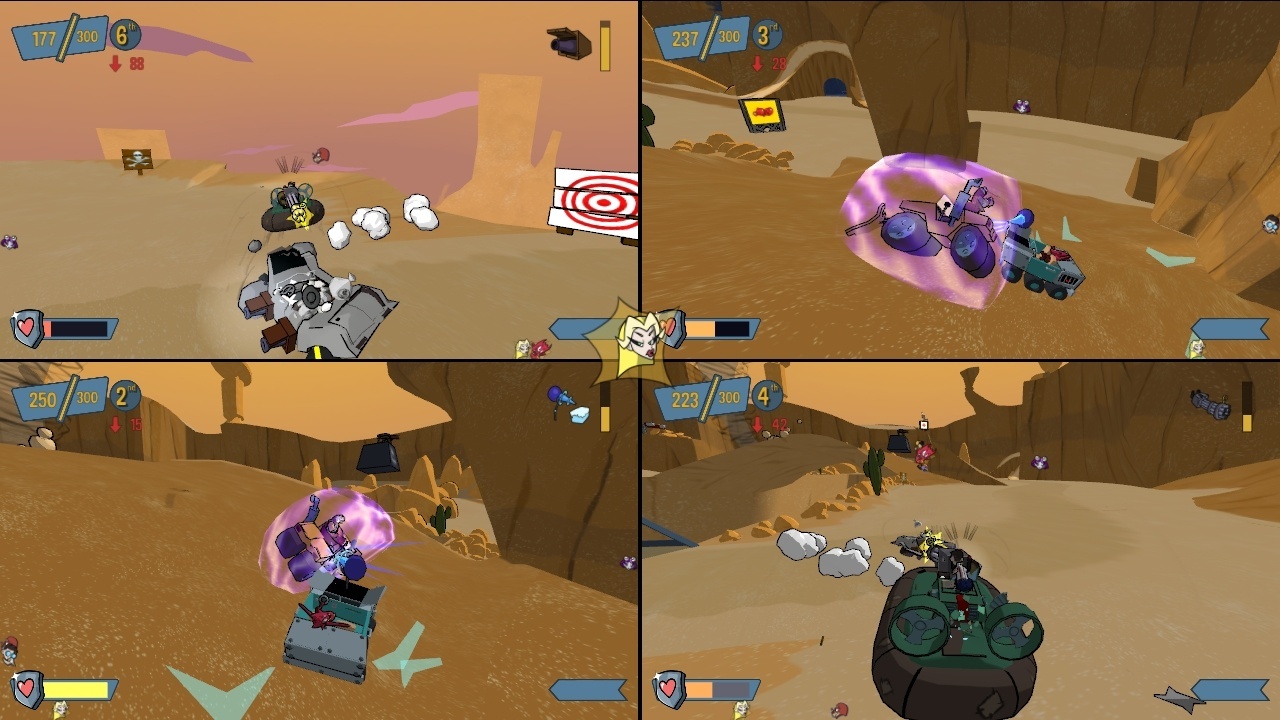 Despite its frantic mechanics, it is soon a control scheme that becomes familiar and ultimately, adds to the fun that this title can offer. This comes to the forefront when you play the game with up to three other players in a split-screen mechanic. As a four-player couch-multiplayer, this is a game that outshines much of the competition out there. It’s hilariously mad-cap and frantic as you and your friends or family battle it out for overall supremacy. In terms of technical performance, everything runs at a silky-smooth pace on the Switch, even in its split-screen modes. Saying that though, it’s definitely more suited to a docked-style of play in multiplayer, rather than four people playing on the go with the Switch’s smaller screen.

Although the game can be fun, it does contain a few faults that carry over from its original release. Balancing has always been an issue with the game and still remains. Some of the weapons certainly out-perform the others and with time, you’ll find yourself going after the same weapon-type, as will your competitors. It’s not a game-breaker though and in some ways, adds to the frantic nature of its fast-paced gameplay. It’s biggest downfall though comes with its long-term values. Despite offering a good multiplayer experience, it’s also a premise that soon becomes a bit stale as the initial wave of excitement begins to wear off. This is something that is even more noticeable if you are a solo player. It can only take two or three hours to see everything that the game has to offer, or to unlock everything that lies within. Again, it’s not a game breaker, but does eventually lead to a game that is over way to quick when compared to other titles of this day and age.

Overall though, Cel Damage HD is a highly enjoyable game if you’re looking for a couch multiplayer to play with your friends and family. However, although it contains a cartoon style in its gameplay and presentation, some of its content could be deemed a bit risqué that some people may find offensive if playing with a younger audience. In terms of performance though, this HD remaster looks and plays in a delightful manner and is guaranteed to produce some exhilarating moments that will stick with you for life. However, once its initial appeal wears off, it soon becomes a game that is played in short bursts, as its level of content doesn’t take too long to discover. It’s most definitely a game that I’d recommend, but only if you’re looking for a fine example of local multiplayer gaming. For the rest of us, it will entertain, but only for a limited amount of playtime.

Cel Damage HD is a highly enjoyable game if you’re looking for a couch multiplayer to play with your friends and family.