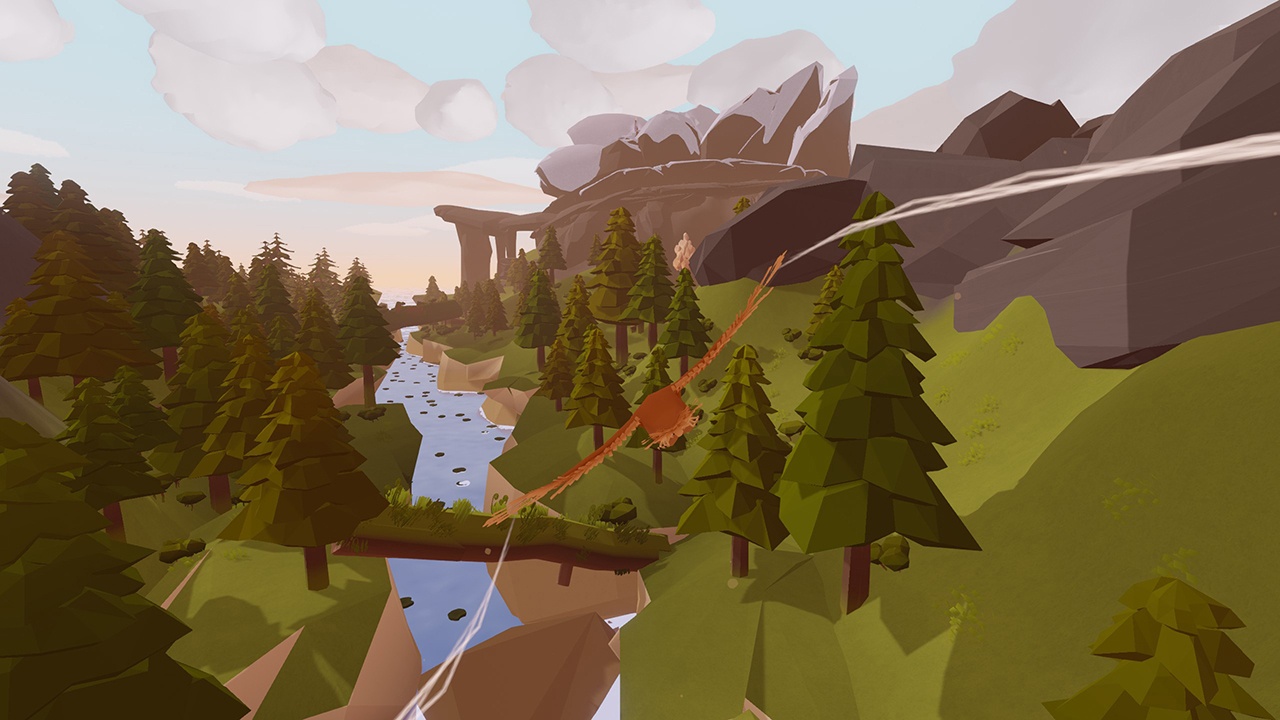 To be perfectly honest, I have never been a fan of games that weren’t games, if that makes sense. There’s been an evolving trend over the last decade or two for games that not only don’t contain traditional gaming elements (points, bosses, extra lives) but don’t seem to contain a game of any kind. Walking simulators, they’re called, and, while some of them have a story or a tale to tell, some simply exist and that’s the end of it. A majority of these have frustrated me with their purpose: after all, why am I going to take time and play a game if I don’t, well, play a game? So when I initially read about Samurai Punk’s entry into the world of non-gaming with Feather, I was, to say the least, incredibly skeptical.

Feather puts you in the role of a bird out on a flight around a small yet detailed island. As you fly, you can control your pitch and speed, rolling and changing altitude with minimal effort. There are different gateways that you can fly through in order to change the soundtrack, as well as a couple of small secrets that can be discovered by the diligent avian with a bit of exploration. The big incentive for this game is that it makes use of a passive net for the Nintendo Service Online, allowing you to potentially meet up with other players flying about and join them in a flock, getting a chance to go explore and fly together. A beautiful idea, and one that, sadly, I was not lucky enough to experience due to poor fortune. Still, if a game entirely lives and dies by online only content, then it can hardly be called a good time for a majority of players out there. Additionally, I didn’t need to find other people, because I have a pretty good multiplayer basis at home: my wife and two kids, who often sit down and watch my review games with me.

Over the course of the last two years of writing for Bonus Stage, I’ve played more games than I can count for the Switch, and my kids have been there for a vast majority of them (though they admittedly sat out for NEKOPARA and other such titles). When we play, there are always questions, because children are curious and games don’t always make sense. “Where are you supposed to be going?” “What’s the story for this game?” “Is that a good guy or a bad guy?” “Why is the 8-ball so terrible?” It can be overwhelming at time, especially when I don’t have answers because the main story is completely insane and surreal. But I do my best, because what else can a parent do except help to guide and educate their children? 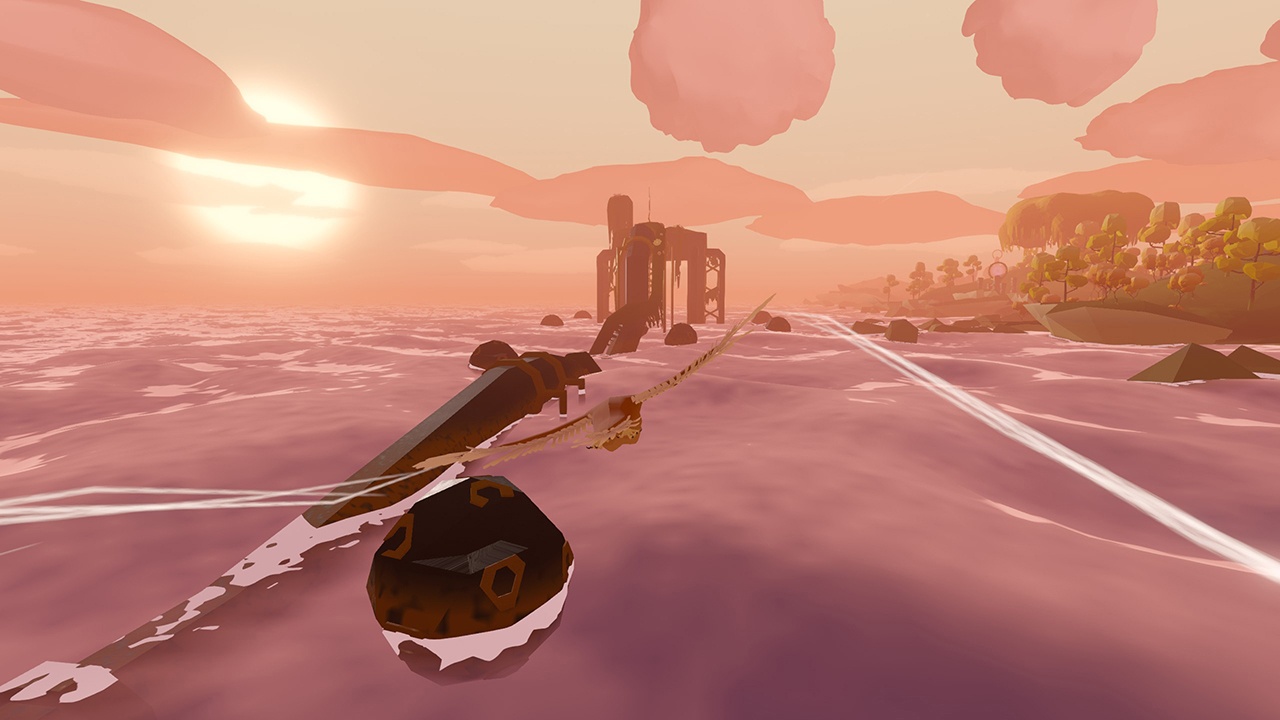 Yet, with Feather, there were zero questions. There wasn’t a doubt in anyone’s mind what was happening, and what was being done. I am a bird, and a bird flies, and there you go. The room was silent except for the gentle piano music issuing from the screen as my character soared through some thermal drafts, cut through a small patch of woods, and even skimmed the surface of the ocean that surrounded the island. I found some other gateways and the music changed, occasionally turning into an upbeat, adventurous tone and then reverting to a more melancholy and lonesome tune.  I was worried that I wouldn’t be able to keep them entertained throughout the flight, because, as far as I knew, there wasn’t a story to be told or items to be found. Then, after about fifteen solid minutes of quiet and ambient soundtrack, my younger child broke the silence.

While far from the photorealistic, resource demanding adventures that the highest end PCs struggle to deliver, Feather is genuinely a gorgeous and breathtaking game to behold. The island is done in a quaint and admittedly CGI style, adding some angular depth to the treetops, a bit of extra jank to the mountains, but it’s not even close to the hyper retro style that we’ve seen in games like Morphite. Instead, you get this notion of an island far, far from here, where the weather is perfectly balanced, people haven’t yet discovered it, and there’s nothing but eco harmony throughout the land. As the sun began to set in the game, a different tint and shade flowed over the landscape, dousing certain areas in pinks and purples in the last dying rays of the day. Then night fell, and I was a solitary bird, soaring among the stars and occasionally letting out a single tweet, not because I wanted to find someone, but so I could sing a song of sleep myself. At one point, I discovered what looked like a portal in the side of a mountain, and flying through it teleported me to the very top of the island, allowing me to see the whole land as I went in a freefall dive towards the land. It was stunning, and positively captivating in letting the player realize the full scale of your arena. Marvelous. 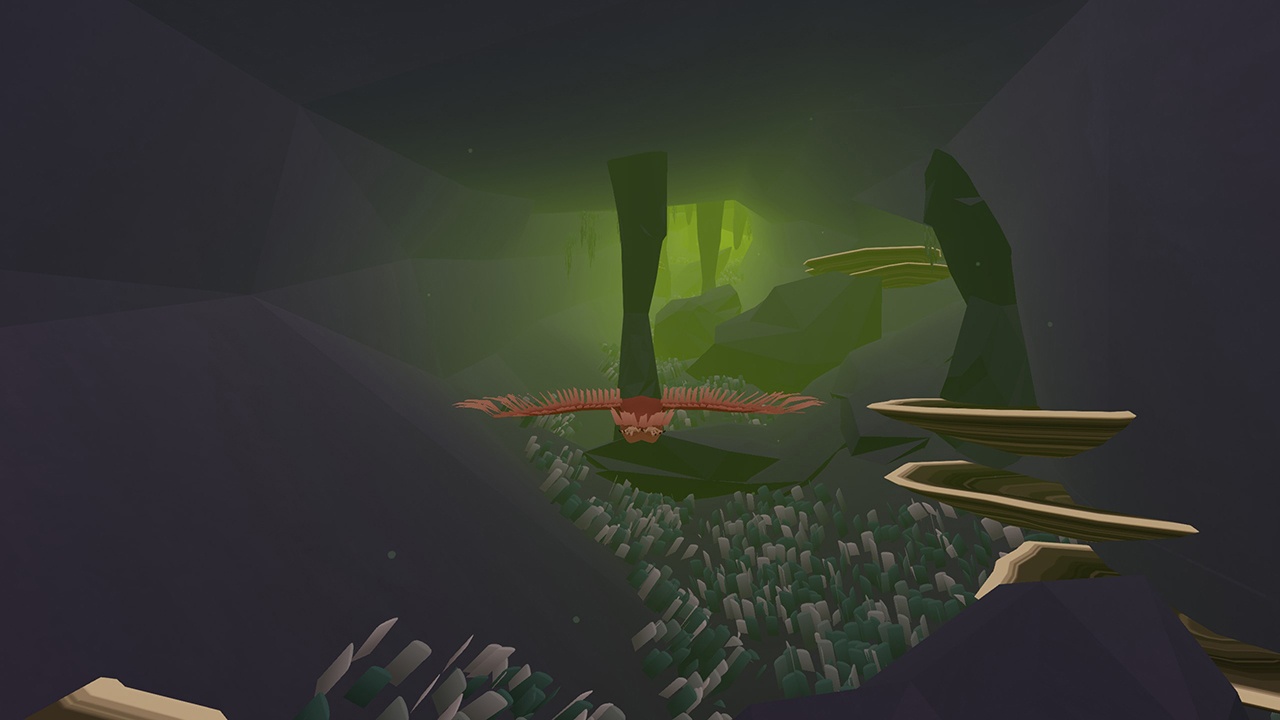 As a comical aside, I really appreciate the way Samurai Punk decided to handle both the controls and their own non combative stance on the game. I handed over the controls to my kids at one point to let them fly as well, and they promptly managed to clip one of the music gateways in a perfect way to come to a full stop. The game then suddenly turned gray and my bird flew backwards, using a Prince of Persia sort of rewind mechanic to allow the player a chance to undo their fowl mistake. It’s so much better than making you respawn at some random location or shaming the player with their mistake. Instead, the kids could simply back up, readjust and try again.

There won’t be a ton of players who decide to take flight with Feather. Many of the things I just said sound boring, and pointless, and, to some degree, that’s correct. If I want to pull of a sweet combo, claw to the top of the leaderboard, or see how fast I can Kill the Past, then I’m going to have to find another port to sail into. Yet there are days when you want to get away from it all, and we can’t all afford a private jet or even a timeshare in Cedar Rapids. For a little over ten dollars, on any given day, I can come home, change, and get fifteen guaranteed minutes of relaxation and detachment. There is no disappointment, there is no failed objectives. If another player joins me, they’re welcome to fly with me or not. No screaming about getting to the base, no deadlines, no dissatisfied clients. For just a few minutes, I am free, and everyone is free to come along on a journey with me. We can all just fly together. So we can just look down at the land, at the sunrise, at the water line, and murmur in agreement: it’s beautiful.

I truly cannot believe how much I enjoyed this game, and I say that with no sarcasm or irony whatsoever.