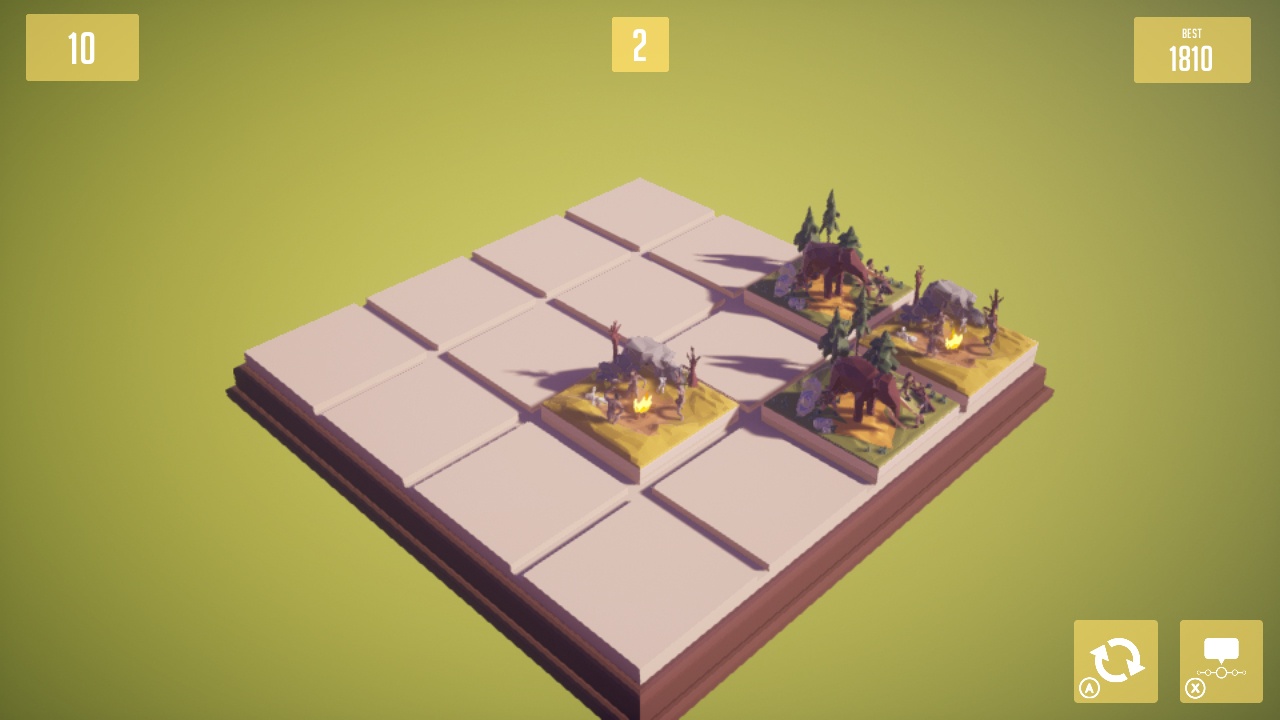 History 2048 makes a good show of being totally upfront about its purpose when you first lay eyes upon it. There’s no tutorial, no dramatic fanfare, no sense of otherworldly wonderment. In fact, if you’re familiar at all with the suffix in the title, you already know what you’re in for. You see, the 2048 series of games were crazy popular on mobile devices and computers something like five years ago, and they sort of just…faded away. The game got every skin imaginable, from Rick and Morty and other pop culture icons to pornography and weird, conspiracy-based imagery suggesting truly bizarre ideas. But in any case, if you’ve played one, you know how to play History 2048; slide the tiles, combine and get to the theoretical biggest number of 2048.

The twist that Run-Down Games decided to impart on History 2048 is that the tiles in question have no numbers on them: rather, they have a series of mildly animated, 3D areas to depict what they consider stepping-stones in history. You start off with a semi-barren landscape and a tribe discovering fire, and that trio of cavepeople give way to a forest with a woolly mammoth. As you continue to get the combinations, you see the rise of civilization in a variety of facets, from the ancient Egyptians to the Death of Caesar, all the way up to a modern, comfortable civilization. All the events are primarily based on traditional historical moments, so you’ll see a bunch of stuff that pertains to European history but nothing from ancient Asian history. Not a problem, just kind of an observation that most of the tiles are what a standard Western education would yield. Oh, and the inclusion of the battle of Thermopylae, but we can thank Gerard Butler and his amazing abs for that being relevant. 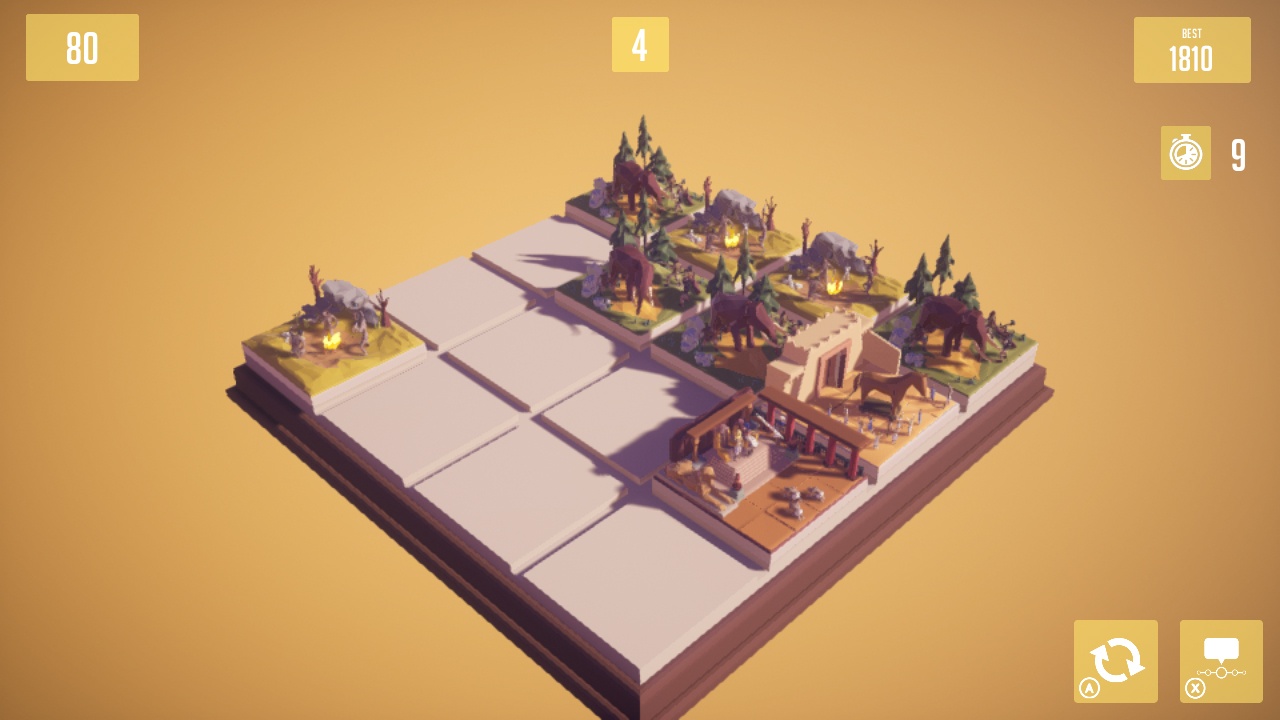 The tiles themselves are well designed, and I appreciate that you can push a button and see them all, in level order, in greater detail. The characters are done up in a nifty sort of polygon CGI style, leaving things a bit blurry on specific details but overall well received in broad strokes. Also, the small animations give a bit of life to the otherwise static playfield, making History 2048 at least one of the more visually exciting versions of the game. I especially liked seeing a tiny figure jogging in place at the first Olympics, or the light pouncing and mane shaking from the lion in the Roman Colosseum. Taking a moment to observe the tiles also helps to ingrain the known level progression into your head (no peeking at future tiles till you unlock them!), so that way you don’t get confused and try to put any carts before the horse. Then again, due to the very nature of the 2048 games, there’s not a lot of chances to get mixed up, because you simply can’t combine things that don’t work. You just keep moving them along, pairing up tiles, evolving them into the next set and then trying to combine those with others. Repeat until the board is full up or until you get bored.

But here’s the rub, and it’s a bit of a big one. There isn’t really a way to lose the game as long as you have patience. Run-Down Games decided to pack in an “undo” feature for the game that has a limitless reuse policy as long as you can wait out the cooldown timer. So if you feel like you’ve painted yourself into a corner and just need one step back, great, no problem, hit the undo and then move right along. If you think you’re totally screwed, though, that still isn’t a problem. As long as you don’t touch the joystick on the Joycon, you can undo, wait 20 seconds, undo again, and keep going back as far as you’d like if you think it’ll make any difference. It’s a tradeoff, clearly, of your own time invested versus how important you feel getting that high score is going to be. I don’t begrudge the option being so available, but it definitely cheapens things in a grander scheme of high score. After all, if I’m so determined to become the top History 2048 player on my Switch, then I won’t mind literally sacrificing minutes to keep going back in time till I can move forward unimpeded. 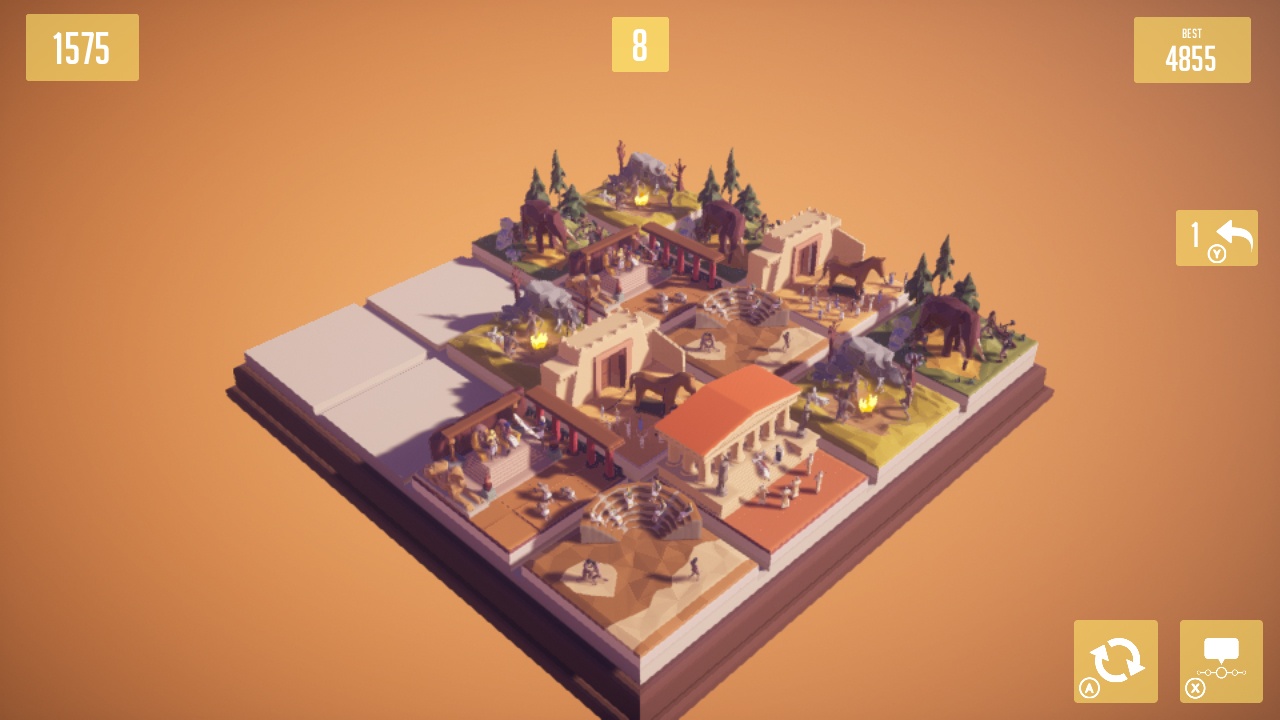 The game doesn’t deliver much more than what these brief paragraphs have lain out. You control with one joystick, there’s zero music to appreciate (just some sound effects for tiles moving and unlocking a new level) and you don’t even enter your initials for the high score. This is literally a blown up, pumped version of the traditional game with some pretty tiles and a fairly standard price tag for a smaller game.

History 2048 isn’t necessarily my jam, but it’s harmless enough, runs well, and at least adds some detail that goes beyond “smash numbers together.” If you’re looking to beef up your Switch library with some truly casual, relaxing games, this isn’t the worst choice, and it doesn’t need online connectivity or DLC, and I doubt you’ll end up rage quitting when the going gets tough. Instead, I’m pretty sure you’ll deliver the ultimate irony, and just, well, undo History.

A simple take on the 2048 formula, the detailed tiles are a nice touch, but don’t bring anything new to the table for this well trodden path.