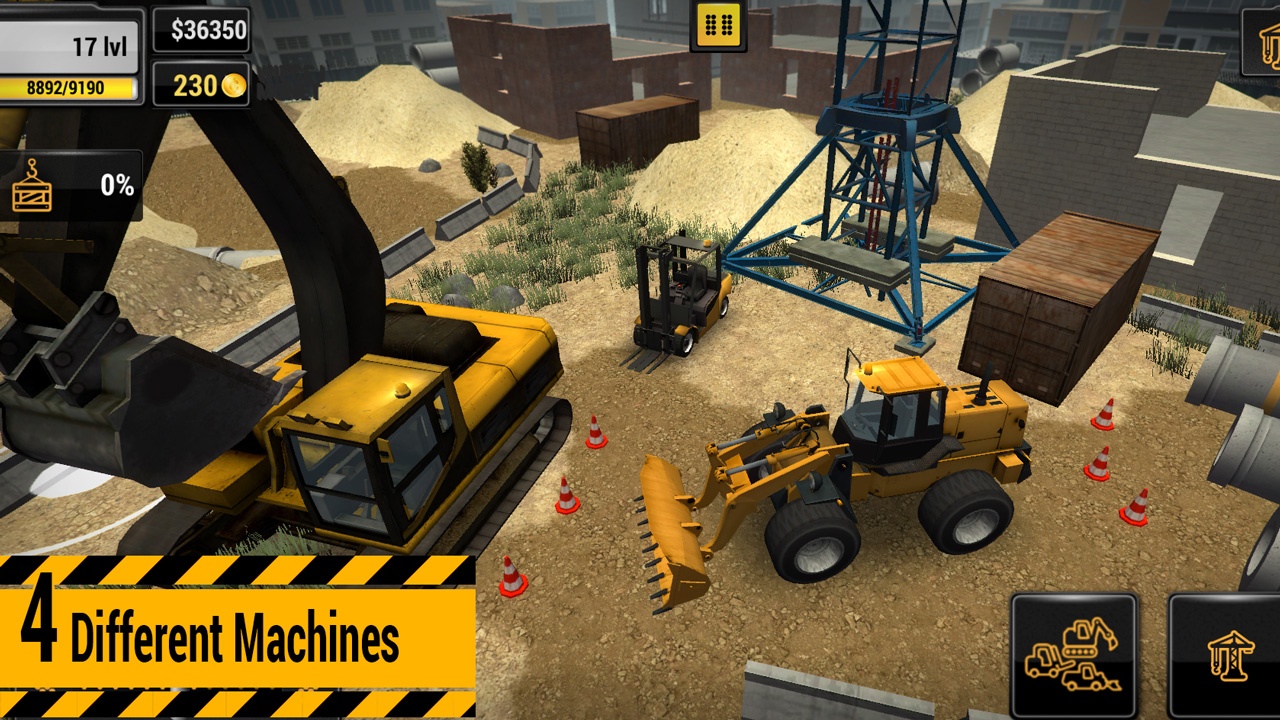 There’s definitely a market for the niche-style of games, however, their subject matter has to hold a certain appeal in order to make them more attractive to a wider audience. The majority of such titles focus on real-world activities or careers that cover such fields as farming, fire-fighting or now, with Koch Media, Ravenscourt, Playway and SimFabric’s latest release, a construction worker with Construction Machines Simulator. It’s definitely a title that holds a certain appeal, as the JCB’s, cranes and diggers of the world certainly hold a degree a fascination to children, or even held one when us grown-ups were younger. However, is this a game that builds upon expectations, or does it simply demolish our childhood dreams into a pile of rubble? Read on to find out.

The game follows a structure of placing you within the position of a manager of a construction company. Through a series of easy-to-follow menus, you can select from a number of jobs, contracts and projects in order to build up a stream of revenue that allows you to expand your company; which in turn allows you to buy new construction vehicles that offers you more variety in the jobs you are able to undertake. However, to add a layer of interest to the proceedings, you also take to the controls of a variety of four different vehicles as you get your hands dirty with the physical work on undertaking your objectives.

You are eased into the mechanics of the game by taking on some less-demanding contracts that involve clearing certain sites to make them ready for construction, loading vehicles with materials, as well as some light demolitions. The money you accrue from these contracts allows to move onto larger projects from building a campsite up to an estate of rental homes, to more lucrative deals that sees you erecting office parks and industrial complexes. However, you need to keep a close eye on your finances in order to develop your business, striking a balance in expanding and maintaining your workforce and taking on contracts that lead to a profit. 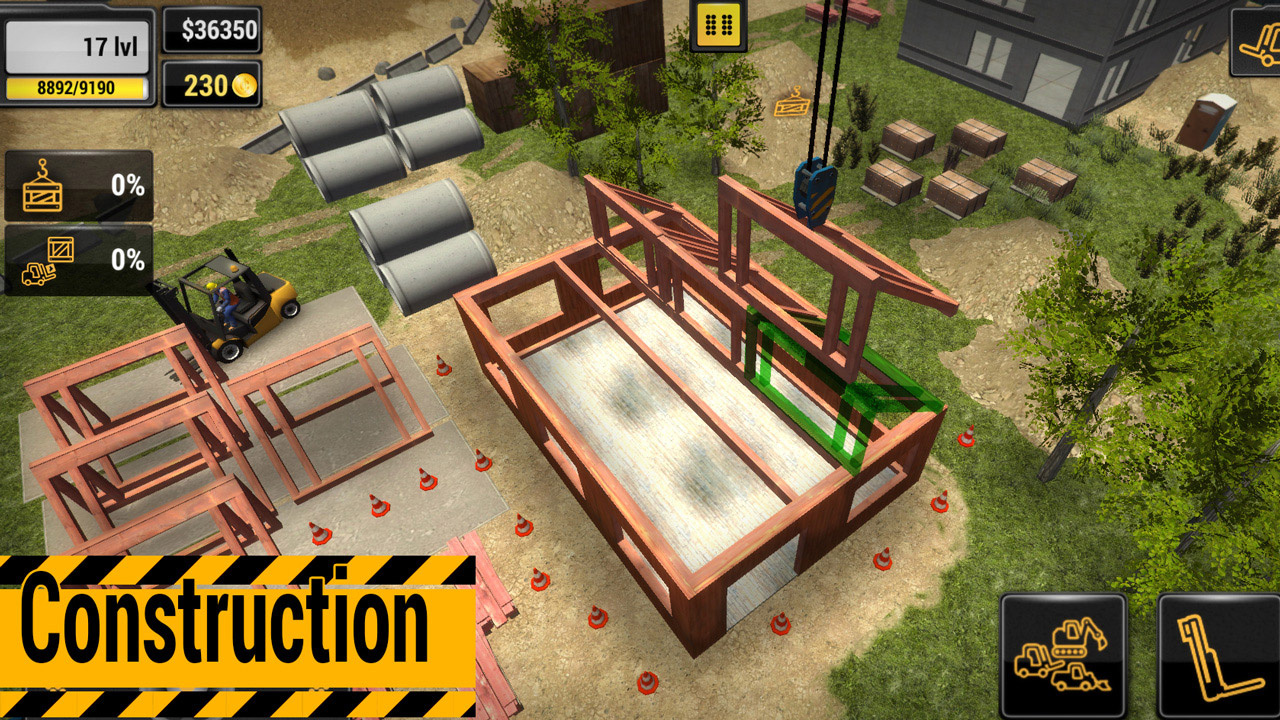 As well as taking on minor jobs, you can also buy contracts that allows you develop and manage a variety of properties; each of which bring in a regular income that helps towards building the best construction company in the district. The further you build, the more you develop and are able to undertake city projects for the mayor with the ultimate goal of finding fortune through your skills of demolition and construction. It all sounds a bit heavy on the managerial side of things, but everything is easily accessible and simple to follow and maintain. In fact, despite its mechanics of running the business side of things, the main bulk of the game revolves around the building and demolition of the sites and more importantly, the construction vehicles themselves.

Viewed from an third-person, isometric perspective, you get to control a series of four vehicle types from excavators to fork-lifts and even cranes. Housed within the boundaries of a building site, you control your vehicle to clear piles of rubble, demolish obstructions from old fences to abandoned facilities, load sand into trucks and carry materials to certain locations, as well as construct whatever project you have chosen to undertake. Whatever your objective, each one is highlighted with a series of arrows that shows you the areas that need to be cleared or items that need to be picked up and also where to take the materials or dump sand. Just like the managerial side of things, the control scheme of each vehicle is also easily accessible, with forward and reverse motions mapped to the ZL and ZR buttons, turning controlled with the left thumbstick and the raising and lowering mechanics of forks, spades and cranes being adjusted with the A button.

To bring a touch of variety to the proceedings, each of the vehicles can be upgraded in specific areas that allows for more demanding jobs and contracts. Jobs can also take place amongst varying weather conditions, although admittedly, these don’t really affect the mechanics of the gameplay too much. There’s plenty of content here too, with over one hundred contracts and jobs to undertake, as well as the maintenance of existing properties and the sustaining of monetary funds. In terms of gameplay, that’s the majority of what is on offer here. 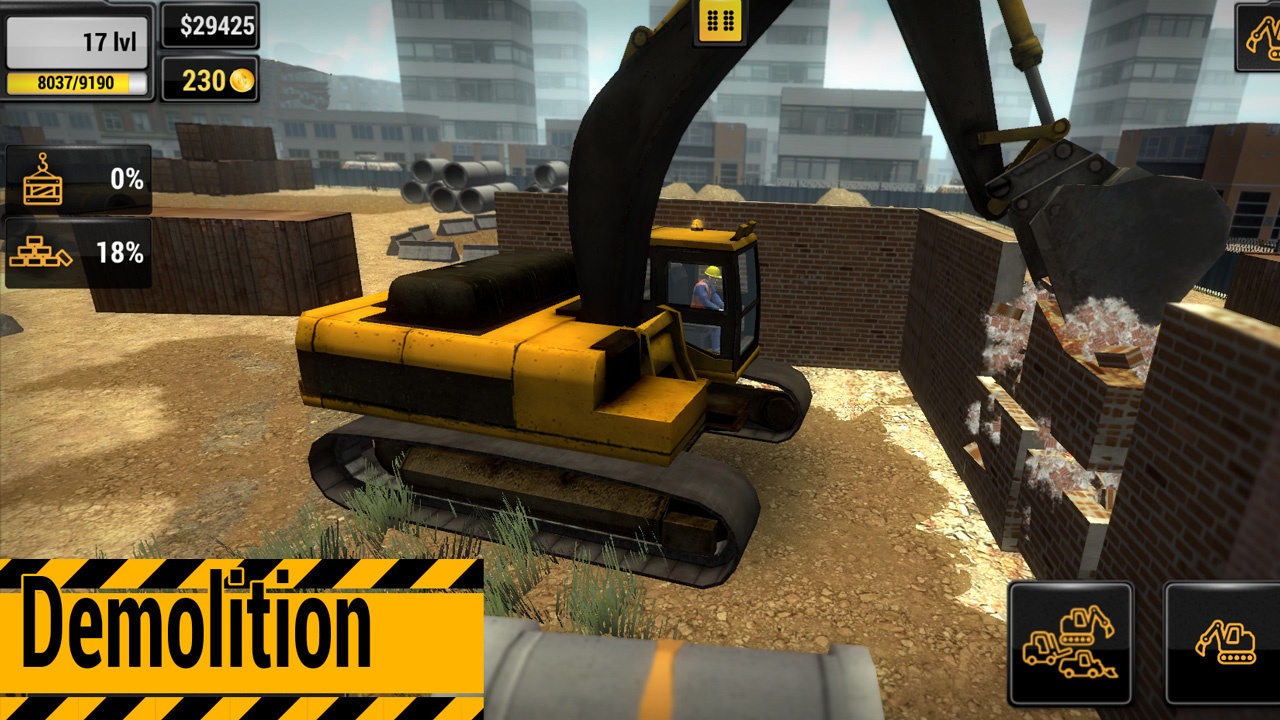 Despite its managerial and construction content, the game plays very much in an arcade style, with its simplicity of control scheme, menu navigation and vehicle viewpoints. There’s no first-person or cockpit view, no precision in controlling each function with a series of levers or buttons and no need to watch fuel gauges or load weights. In terms of producing a realistic experience, the word ‘simulation’ within the title can be a bit misleading. This is by no means a simulated experience in terms of realism, only in the premise of performing a few basic functions of a construction vehicle. Each of the contracts or objectives are quite bite-sized in their execution also; making this more a casual affair rather than a full-blown construction experience.

As a result, this isn’t a game that contains any form of excitement or urgency. It can offer a distraction in playing something different or as a way to bide the time in a portable fashion. Although not primarily targeted at a specific audience, I did feel that this is a title that holds more appeal to younger players with an interest in all things construction related. It simply isn’t technical enough to garner a level of investment in the way it plays for anyone else; unless of course, you also hold an interest within the construction industry as a whole.

Overall though, Construction Machines Simulator isn’t a bad little title as it doesn’t do anything inherently wrong. It’s an easily accessible title that isn’t too taxing on the brain. Although its visuals look a bit outdated, it does suffice in what it is trying to achieve and each of its graphical elements are easily distinguishable. The biggest problem with the game is that it just doesn’t hold enough to fully invest the player; at least in terms of any excitement or overall fun. This will, however, entertain younger players; especially those who love diggers and cranes and big, yellow construction plant vehicles. Because of this, I have scored the game for its younger appeal, but if you’re an older player who is slightly intrigued by the title, then I would take one mark off. It’s by no means a derelict affair and does build well on its foundations with a degree of interest, however, it’s also a title that doesn’t really ‘simulate’ or stimulate.

Construction Machines Simulator builds well on the foundations on what it is trying to achieve; although it lacks any real simulation or stimulation.