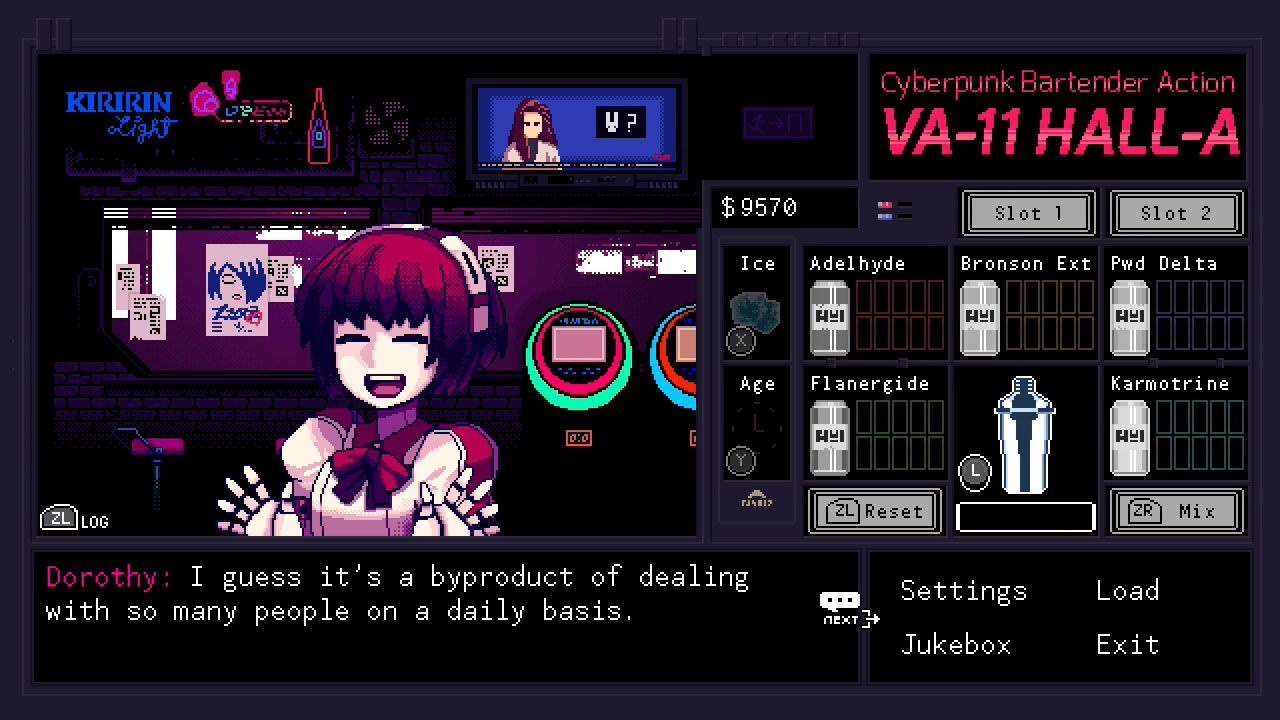 The bartender is the modern equivalent to the deus ex machina of classic plays. Always attentive, wise and informed, the bartender acts as a psychic foil for the main character to finally figure out what he or she needs to do to win the girl, solve the case,  save the company or just accept some hard truths. Though the position has sort of slipped away with the death of the classic sitcom and the rise of the long form dramas, the mentality still exists and cannot be shied away from entirely. Anyone who’s had a rough day at work and needed to keep them coming understands how great it can be to have someone to talk with while also getting drunk. This, perhaps, is a relatable element that inexplicably creates both relatability and intrigue with VA-11 HALL-A: A Cyberpunk Bartender Action.

VA-11 HALL-A is the official title of the hole-in-the-wall bar that exists in the deep, dystopian future of Glitch City. Since the name is little more than the area’s designation and block, clever patrons have nicknamed it “Valhalla”. You are the bartender, Julianne, though most people call you Jill, and your job isn’t glamorous, but it is effective. You’ve got access to a great list of drinks, and, in a world that’s somewhere between police state, corporatocracy and on the cusp of a Singularity, plenty of people have plenty of reasons to get good and drunk. Also, as it turns out, your bar has a bit of a bill to pay, to the tune of $10,000 for rent by the end of the month. As you like your job and like not being homeless, Jill has a bit of incentive to try and make the best day for her customers that she can. But she can’t go out and bring the drunks to her: it’s word of mouth, loyalty, and sheer luck that puts butts on stools, and you gotta make sure the drinks bring in the tips to seal the deal. 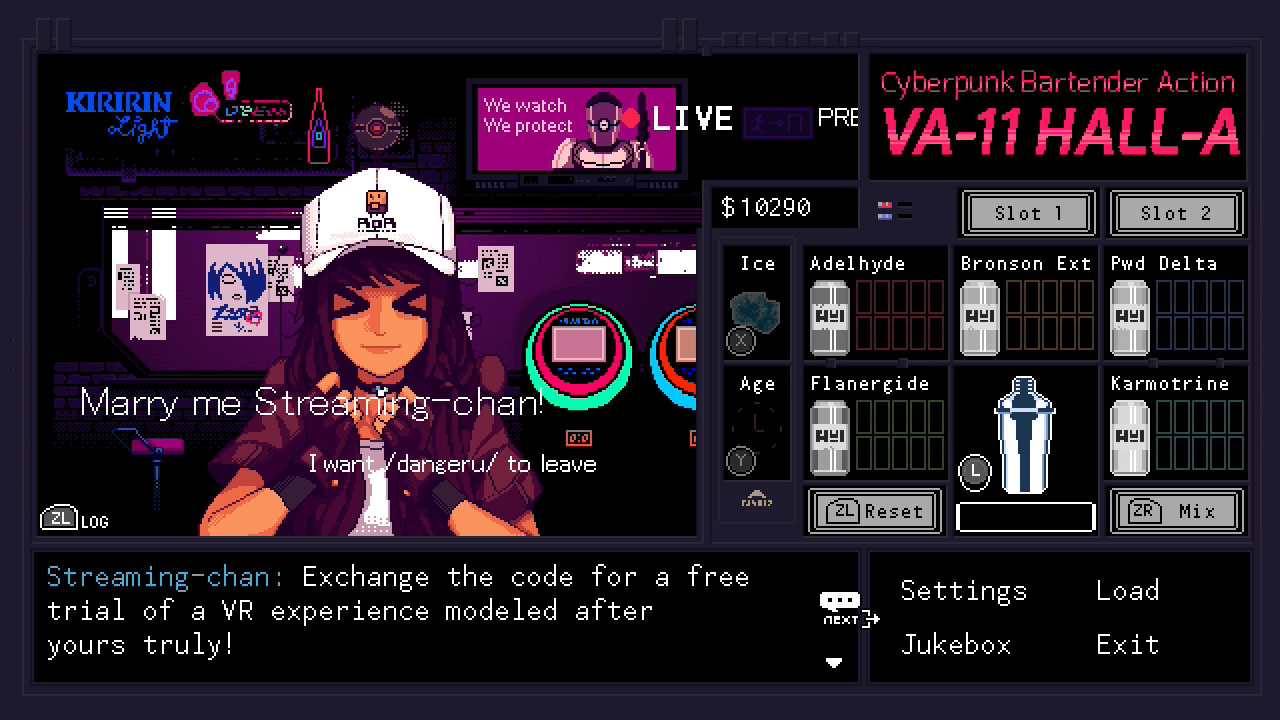 Playing VA-11 HALL-A is a very unique setup, but, once you get the hang of it, things really take off. For a majority of the game, the setup is very much a visual novel: you’re not gathering clues or items or anything, you’re mixing drinks and talking to patrons. As the conversation continues, you’re asked to mix them drinks, because, surprise, that’s your job. The drinks that you can mix all exist in a handy-dandy guide, and you have a modicum of control over this aspect. Failure to make the drink right can have some results later on, but, for the most part, you can remix a drink again and again till you get it right. Some drinks have variables, such as the potency, which can result in some branches in dialogues and choices. Additionally, when a patron gives you an idea of a drink and not a specific request, that lets you flex your creativity a bit more, and this can lead to different branches as well. At the end of the day, you mix drinks and talk/read, and that’s really about it.

The porting of VA-11 HALL-A to the Nintendo Switch has been fantastic, and I want to make that known right off the bat. As a game that takes a modest amount of time (even a quick playthrough will take about ten or more hours), having it be portable and allowing players a functional “pick up/put down” aspect increases the game’s enjoyment, at least in my case. You can completely play the game with either controllers or touchscreen, and the touchscreen does make for a more relaxing format compared to the JoyCons. But that’s like saying picking up pineapple with a fork is better than using a toothpick: the difference between the two is mostly cosmetic and not utilitarian. You can very quickly and easily thumb through the drinks with the right joystick, and the ability to dash through the drink manual with the ZR button makes for certain actions and transactions to move at lightning speed. Not to mention there’s been zero loss in content, quality or soundtrack, which we’ll address in a moment. Sukeban Games has, in addition to the main game, added in the Prologue to the main VA-11 HALL-A story (which is a multi day affair) and the original demo to show you where the game was headed back in the day. Both are interesting extra plays if you dig the main game. And there’s a ton to dig.

Firstly, the artistic style of VA-11 HALL-A is one to enjoy and embrace. With everything drenched in neon and shadows, it captures the ideal “Gibson” sort of future that was dreamed up decades ago, and complements it with a full cast of cyberpunks, androids and dogs with personalities and attitudes. Everyone’s character profile is done up in high density, carefully measured anime style, really calling back to some of the designs and artwork that I would have seen in the days of Project A-Ko, Bubblegum Crisis and, naturally, Akira. The interface of your CALICOMP to guide you through your Drinktionary, the different aesthetics of the drinks you prepare, even the changes in appearance to your patrons as they further their time with you add up to some admirable and impressive details. When you see how many people are involved in the Sukeban team, it only gets better. 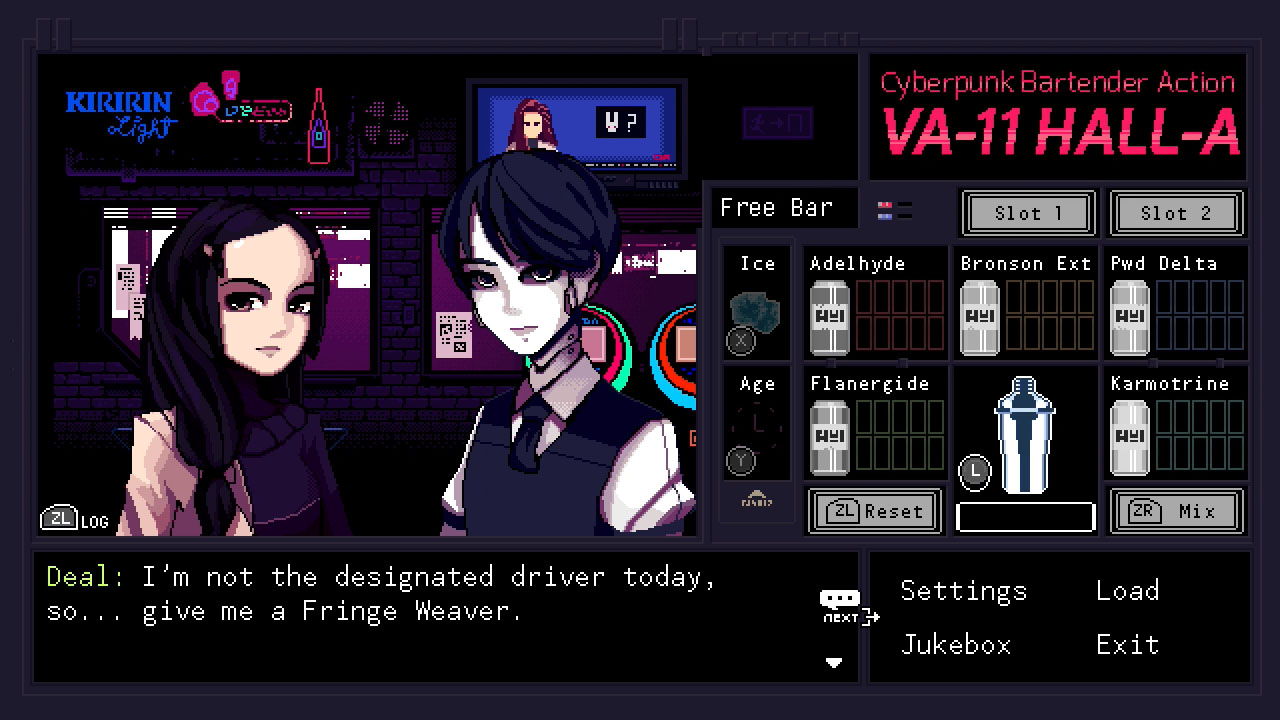 Then, there’s the game itself. While you might find the concept to be a tad lackluster, the delivery and dialogue that happens throughout VA-11 HALL-A keeps the player fully locked in and entertained. You often find yourself enraptured in the conversation threads that you keep weaving and pulling, trying to keep everything sorted and helping along people to get both what you want and what they want. Finding out about the White Knights from Sei, cheering up Dorothy, scoring tickets to see *Kira* Miki ni concert or simply bouncing theories and borderline philosophy with Donovan on the regular. There’s a great mixture of comedy and gritty truth intertwined with the lives of those coming to Valhalla, and you want to learn it all, understanding the tenuous balance between social lubrication and sloppy nonsense that comes from what the bartender wants to dish out. Not to mention you work with a fantastic cast in the bar, especially Rad, the best damn Shiba you’ll ever encounter. It’s hard to believe that VA-11 HALL-A is set in the same universe as 2064: Read Only Memories, if only because the writing is so wildly different. Both are great stories, but 2064 was about a message: VA-11 HALL-A is about the people.

Lastly, it would be an unbelievable crime to not mention the soundtrack therein. VA-11 HALL-A has one of the most eclectic, diverse and interchangeable set of tracks that I’ve ever encountered, and I love what a rich part of the story it is. As the bartender, you get to choose the jukebox tracks for the night, so load up what you want to hear the most. The music is hard to get an exact bead on, though you can throw around a lot of the high falutin genres that’ve been popularized in the last decade or so. Vaporwave, Future Synth, Sea Punk…there’s touches of it here and there, and it’s very evident that a lot of consideration went into deciding something that felt out of time and mirrored the future, however dark and foreboding it might be. You can choose twelve tracks to run in the background, so run the full gamut and move from Every Day is Night to The Girl With the Iron Heart, or just loop Snowfall for twelve straight plays. Some tracks will become available as time goes on, so be sure to check back in at the start of every day to see what new tunes you can enjoy. Oh, and be sure to check the Bandcamp page to see what the game has in store and to potentially support Garoad directly.

VA-11 HALL-A is one of those unusual visual novels where there’s not total static nature, but the replay isn’t based solely on finding the endings. It’s about re-entering the world and finding out even more because it’s compelling. It’s about loading up new tracks and seeing if the conversations with Mario change tone when Will You Remember Me? Is playing. It’s about having this game in your back pocket to create the perfect soundtrack for when you need to work and to get some inspiration when you need to focus. Sukeban Games may have had some hard times getting their game out onto consoles, but it was worth the time and effort, and players will reward them in turn. If you’re patient, the upcoming physical editions look marvelous, but, for those of us who cannot wait/don’t have space, the digital version is a perfect Steam port with real consideration for Switch interface and enjoyment. Just keep headphones on hand: you don’t want to miss a second of the sounds of the future.

VA-11 HALL-A is one of the most unique and engaging simulations to serve the Switch, riding a blurry line between visual novel and out-of-body experience.