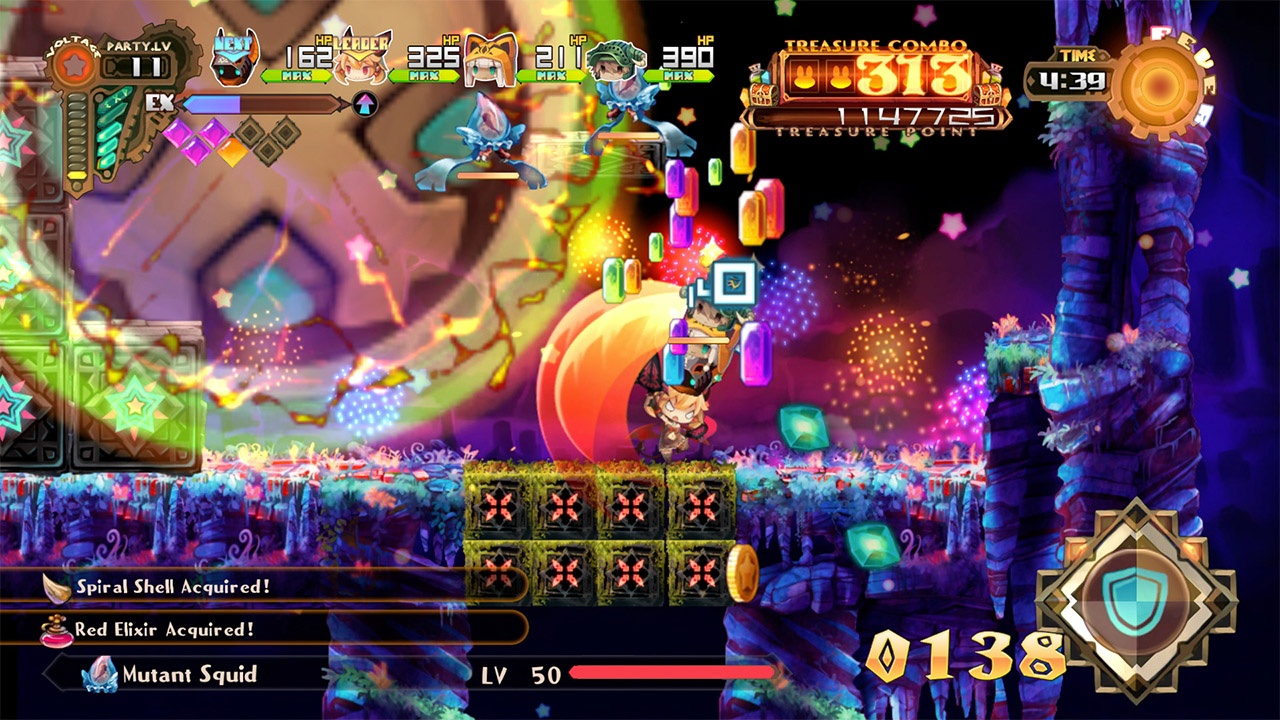 When it comes to bringing the best of Japanese gaming to the west, then publishers NIS America, stands largely at the forefront; especially on the Nintendo Switch. Their eclectic mix of mainstream and lesser known titles offer an interesting insight into Eastern games, as well as some of them offering an abundance of extreme playability. The latest of such offerings from the aforementioned publishers, comes in the guise of Nippon Ichi’s Lapis Li Abis, or upon its Western release, a quirky little title known as Lapis x Labyrinth.

Primarily an action-platformer, Lapis x Labyrinth also injects elements of the slash-and-hack genres, as well as a sprinkling of role-playing goodness to produce a dungeon-crawling game that charms as much as it draws you in with its abundance of luring charm and playability. The game begins with you creating a group of four adventurers that have a range of careers from the Hunter to the Gunner and the Maid to Necromancer. Each one specialises in a specific skill of weaponry, with the Hunter being adept with knives and the Necromancer being more spell orientated, as well as each one also varying in their values of Health Points and Damage Modifiers.

Whatever characters you choose to comprise your party, each one can be personalised with a specific name and look; albeit within a limited selection. From here, you begin the game with a basic tutorial that introduces you to the mechanics of level designs and moves available to you. There are a variety of elements at play here, from a basic attack with the Y button to a secondary style with the X and the ability to jump multiple times with the B button. However, the game also incorporates a myriad of combo moves that string together to produce some satisfying results; more of which I’ll highlight as the review goes on.

Once you pass the tutorial, the game opens up into a series of 2D platforming dungeons, with your party of four stacked upon one another. Your objective here is to collect a series of purple gems that open up gateways to deeper levels within the dungeons and ultimately, activate the exit portal. However, each of the dungeons themselves are inhabited by all manner of enemy types, from slime balls to some impressively large bosses. As you progress through the game, the dungeons take on a role of aesthetic presentations from lush jungle environments to harsh sand and stone varieties as you journey across the lands in search of a fabled tree that is encrusted with gold and houses the richest of treasures. 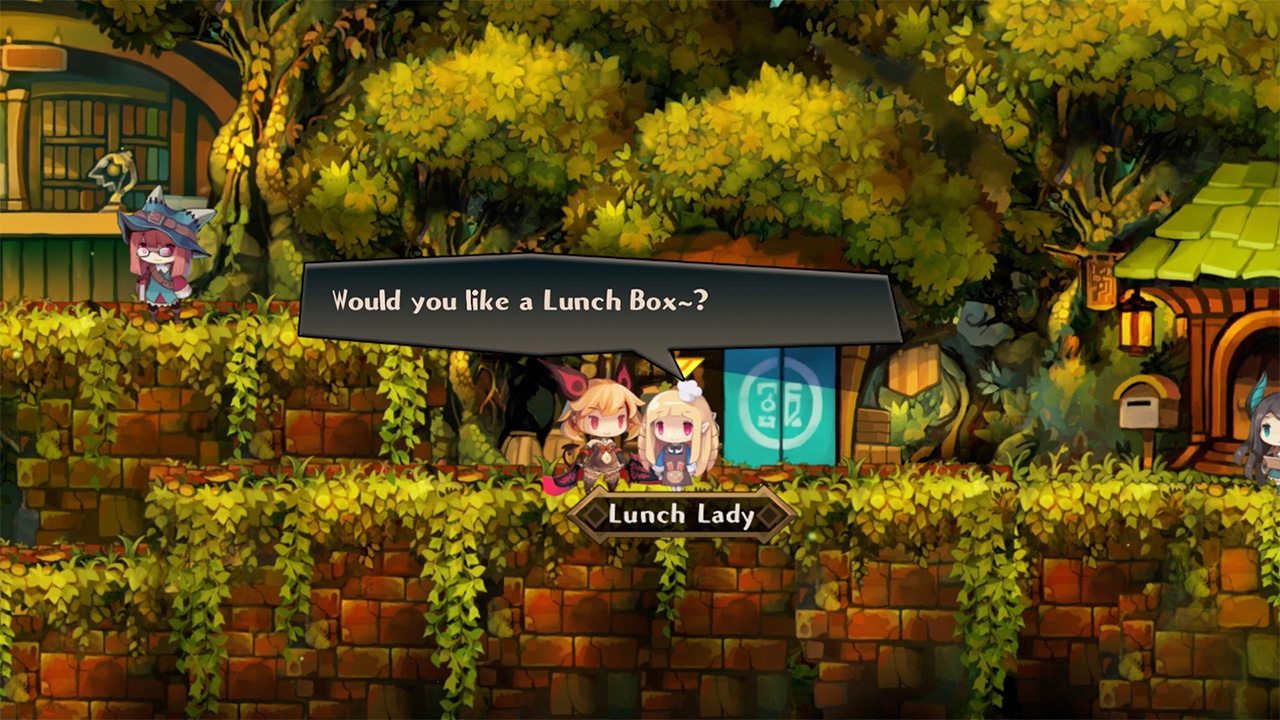 This is where the story of the game comes in. Through the years, many adventurers have tried to find the tree, but failed. Sat at the entrance to the vast labyrinth, a small town offered a haven to the would-be treasure hunters, but as the brave began to dwindle, so did the town; eventually disappearing into obscurity. However, with the arrival of you and your four-man crew, the town has re-emerged and it is now your job to not only embark on the journey of discovering the ancient tree, but also to bring the town and its folk back to prosperity, thus producing more facilities to help you on your quest.

This is achieved by exploring the floors of each labyrinth, slaying the monsters within and collecting all manner of treasures; as well as collecting the gems to activate the long dormant portals within the labyrinth. It’s here where the core gameplay values of Lapis x Labyrinth are found. All of its elements combined produce a fun experience for the player, from the tight and satisfying combat to the exploration and activation of all the secrets that lie within; plus some clever implementations that bring a uniqueness to the game. When it comes to 2D platforming, action adventures or hack-and-slash games, this is simply a title that contains a lot more than you think you may have bargained for.

Each of your quests start off within the town at the entrance to the labyrinth. From here, you can choose your quest, buy, sell or exchange garnered weaponry and treasures, arrange for food deliveries and generally interact with the townsfolk. Once this is done, you then take a lift into the depths of the labyrinth and explore its caverns one floor at a time until the exit portal has been activated. With your party stacked upon each other, the adventurer who sits at the bottom deals the damage to combat the monsters that lie within. Should they succumb to the strength of your foes, then the next adventurer in line takes over; with the previous combatants head dis-joining from the party and the rest of your group have to pick it up before a timer signals its demise; so as to put the character back in line to fight another day.

It’s here where party selection becomes an important asset that determines success or failure. With each member of your party being sufficient in different skills, you can create a group that comprises of close-quarter and long-range attacks, as well as boosting attributes with magical spells or implementing brutish strength with tank-like characters. Using a combination of button moves, you can also string together a number of combat moves from each character; with one particularly satisfying move, triggered with the R shoulder button, that incorporates all four of your party at the same time that dishes out some serious damage to all of the enemies on the screen. The whole element of the combat is superbly done, with an instantly accessible control scheme that produces all manner of moves with sublime ease. 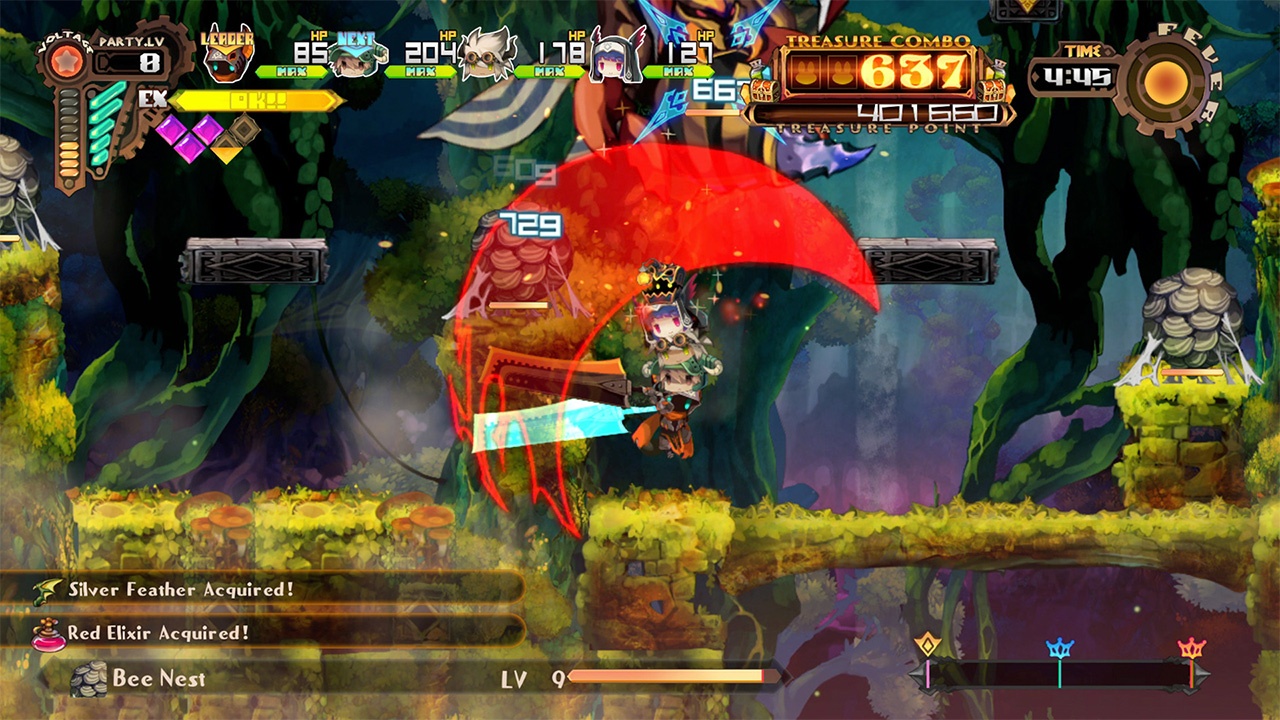 It’s a good job too, as you’re going to need to utilise every skill available to you to overcome the sheer number of enemy types within floor of the each respective dungeon. Certain areas create a seal that blocks you in and in order to proceed, you must destroy every foe that is housed within. These enemies come from all directions, with ground and aerial based creatures. However, through a series of gauges that fill up with each combat encounter, you can pull of a series of special moves that easily matches the sheer quantity of enemies at your door. However, as you dispatch more and more foes, a fever meter also fills and once activated, creates a fever mode which is, well, pretty fevered.

Once activated, the whole presentation of the game changes, with neon lights and fireworks, as well as a change in the soundtrack to match. With only a limited time span, you need to quell as many enemies as you can, as well as smash blocks and generally cause mayhem, to collect as many gems, crystals and treasures as possible. The sheer number of rewards during this mode is simply overwhelming, often filling the entire screen with all manner of treasures as you blast your way through the level. Your combat prowess is also boosted here, with stronger attacks and combo moves that makes easy work of any nearby enemies. It soon becomes an element of the game that you simply begin working towards, activating its satisfying results multiple times during the level; especially if you find yourself within the sections that are sealed off, producing more mayhem than you can possibly imagine and filling the screen with so much loot, that you easily lose sight of your heroic band and the monsters surrounding them.

Although all of the games’ elements are immensely satisfying in its combat and exploration, it’s this fever mode that simply keeps you playing. It’s that much fun that you find yourself wanting the gauge to fill as fast as possible in order to create its manic results time after time. However, with each level also containing a time limit in which to activate the final portal, the need to traverse each level as quickly as possible also becomes paramount. Sometimes, it can be a frustrating mechanic, playing against a timer, but here, it simply adds to the urgency and fun of the game, as the exploration of each level is never a chore. Fail in your task of exiting before the counter reaches zero and a dark spirit which cannot be destroyed is summoned and causes instant death upon contact. Succeed though and the rewards are just as satisfying as the gameplay. Based on your performance, you are rewarded a number of keys which, at the end of each level, allows you to open a series of loot boxes that contain better weaponry, armour or items to better equip your party. It’s a neat mechanic that adds to the lure of the game.

It all adds to produce a very addictive quality in its gameplay. From the presentation, which is clear, colourful and vibrant to its playability which is tight, solid and down-right addictive, Lapis x Labyrinth contains all of the ingredients that creates that one-more-go mentality. However, largely due to the design of the game, it can become repetitive and grindy after a while, especially as you progress further into its ten-hour or so story, yet it still draws you in and forces to play whenever you can; even if its only one level at a time. There’s a certain charm to the game that flows throughout and lures you in repeatedly, from the characters to the development of the town; everything here is superbly crafted and presented with a rewarding level of playability that creates a genuine feel of excitement which, ultimately, produces another must-own game for the Nintendo Switch.

Lapis x Labyrinth is a dungeon-crawler that you’ll simply lose yourself in with its addictive charm and luring rewards.