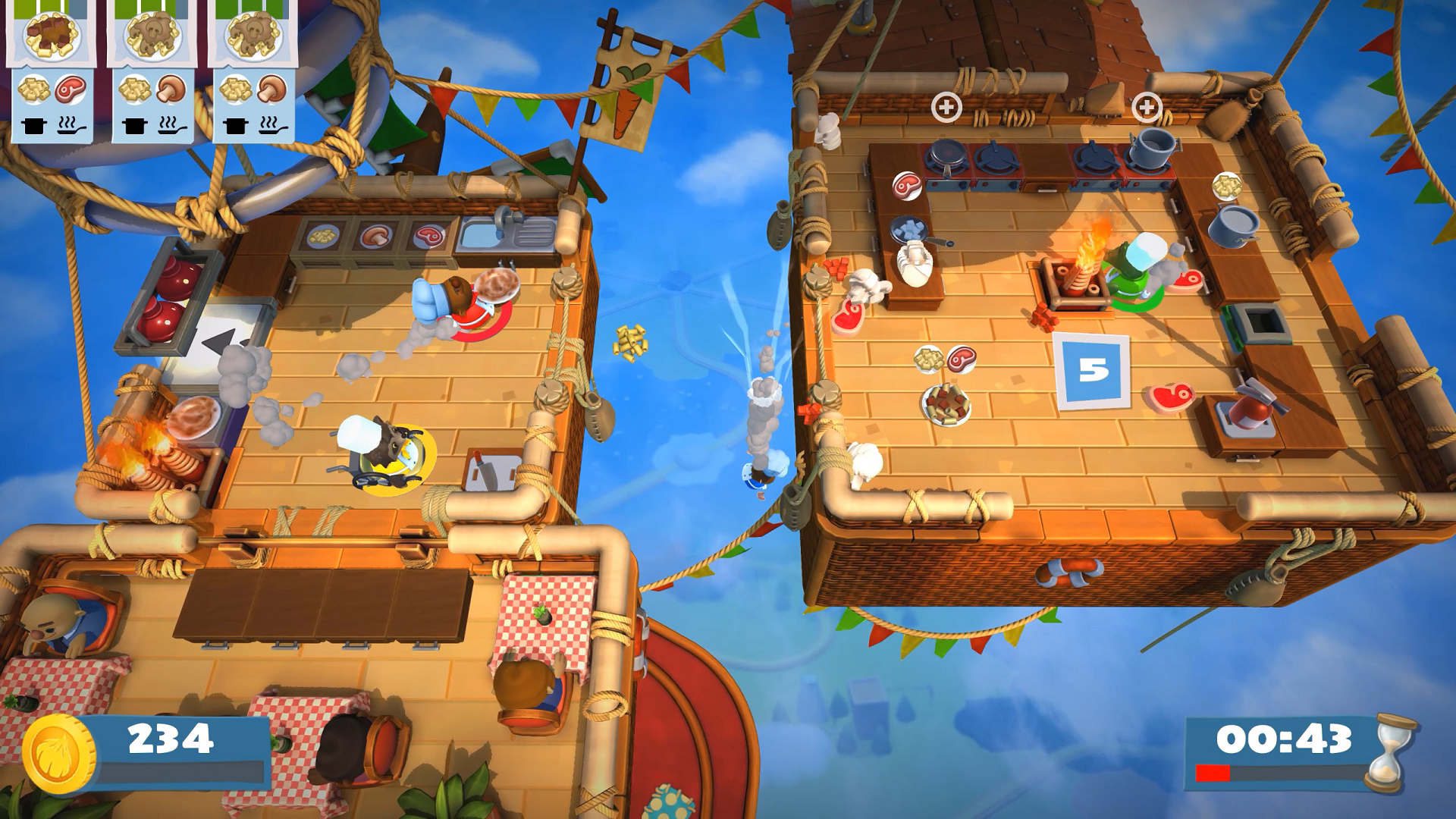 Overcooked 2’s surprise appearance at last years E3 was an easy highlight for me; there’s not many games that have had such an influence on my home life as the first title, so more of the same was a more than welcome sight. Just like the original, Overcooked 2 is silly fun that offers an accessible, but challenging culinary co-op experience; even if its nowhere near perfect.

Apart from the occasional round of Mario Kart, Overcooked was the first real game myself and my girlfriend played together. If anything, it was a test of our relationships foundations – how well can we actually communicate, and can we successfully maintain our orders while avoiding the moving floors and rickety bridges of the world of Overcooked? Turns out, we’re alright, actually. It takes some work and definitely some practice, but success in Overcooked comes down to effective discussion and accurate timing. After a while, we had the first title in the bag, three starring the whole thing no problem, so what does Overcooked 2 do different to ramp up the challenge?

Turns out, not a lot. The sequel is very much more of the same, but that’s not a bad thing, rather than reinvent the formula, there’s been more focus on redefining – rough patches have been boarded up and a few bells and whistles tacked on to boot. The main shticks the same; follow the recipes that flood the top of the screen and serve the food as fast as possible, all while avoiding all manner of distractions. It’s possible to play solo, but it’s made for co-op; splitting the workload between multiple players to ensure the increasingly absurd orders are completed. It feels like Ghost Town Games feel more confident with the series, taking more risks and, for the most part, they’ve paid off.

The first massive change you’ll notice is the addition of the throw button. It might sound ridiculous that such a small thing is such a big deal, but the ability to throw raw ingredients across the map rather than carry everything back and forth absolutely changes the game. It makes things much easier, providing you don’t accidentally throw an ingredient in the wrong pot or overshoot and miss entirely. 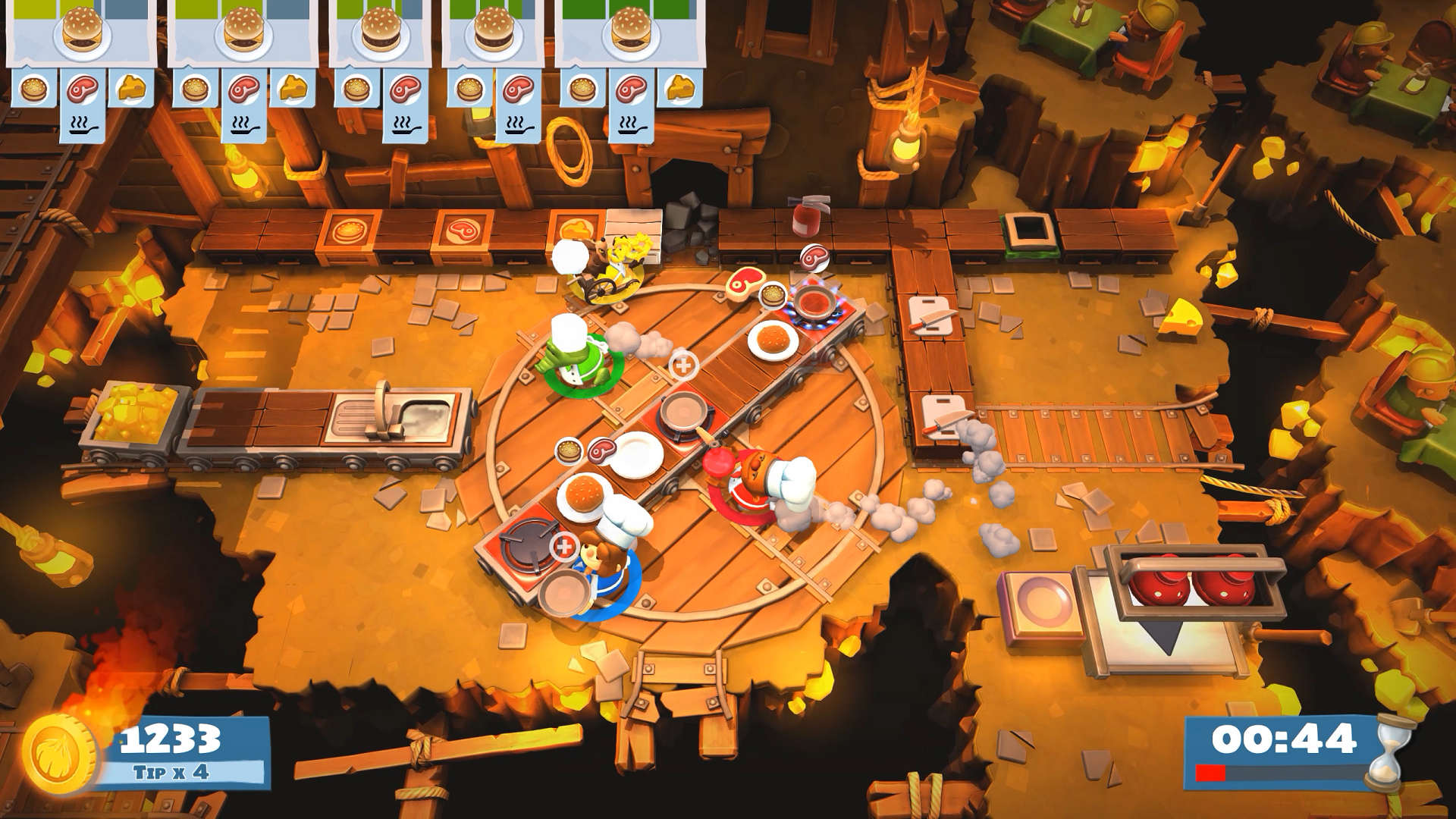 Just like the first title, the world is a bizarre collection of off-kilter maps spread over 40+ scenarios, each level serving a different, challenging experience to test your skills. River rapids require you to jump back and forth across floating logs to reach equipment and ingredients, all while avoiding plummeting to a watery grave, while the spooky wizard school is a confusing, dimension hopping multi platform nightmare. There’s ample new tricks and traps to frustrate you on your culinary adventure, as well as some returning ones, but just like the first time around, none of them are impossible to deal with, rather success requires quality and accurate communication between you and your fellow chefs.

Dynamic kitchens were a big part of the promo footage, like the collapsing hot air balloon that changes the kitchen as it falls through the sky. Unfortunately, this is almost the limit of this feature and its vastly underused. Not to say the moments they make an appearance aren’t great – the aforementioned hot air balloon level is fantastic, but these levels are spread thin and aren’t utilized to their full advantage.

Recipes are mostly returning favourites, like the salads and burgers of the last game, with a handful of new dishes to put together. Most recipes are easy to master, but in the thick of it it’s easy to forget and make mistakes. There’s nothing more frustrating than putting together a pizza, only to realise that your significant other has accidentally put mushrooms on your margarita, spoiling a dish and sending the kitchen into disarray. That’s the kind of the beauty of the Overcooked series, the maddening chaos is frustrating, but the payoff when you successfully work together is monumentally satisfying.

Overcooked 2 does seem easier than the first title, however since release the developers have dropped a four star mode that is frankly, painful. It’s ridiculously challenging, and even the first, simple level is a nightmare. Overcooked 2’s season pass is almost halfway through its cycle (and I’ll save my full thoughts for its full release), but so far it’s added tonnes of interesting content that’s made it well worth investing in, for example the Campfire DLC has added a backpack tool, where you have to reach into your friends bag to get ingredients and it’s both an inconvenient and fun dynamic. There’s also been a free Chinese New Year DLC that includes a handful of easy but fun levels, as well as a couple of new chefs. 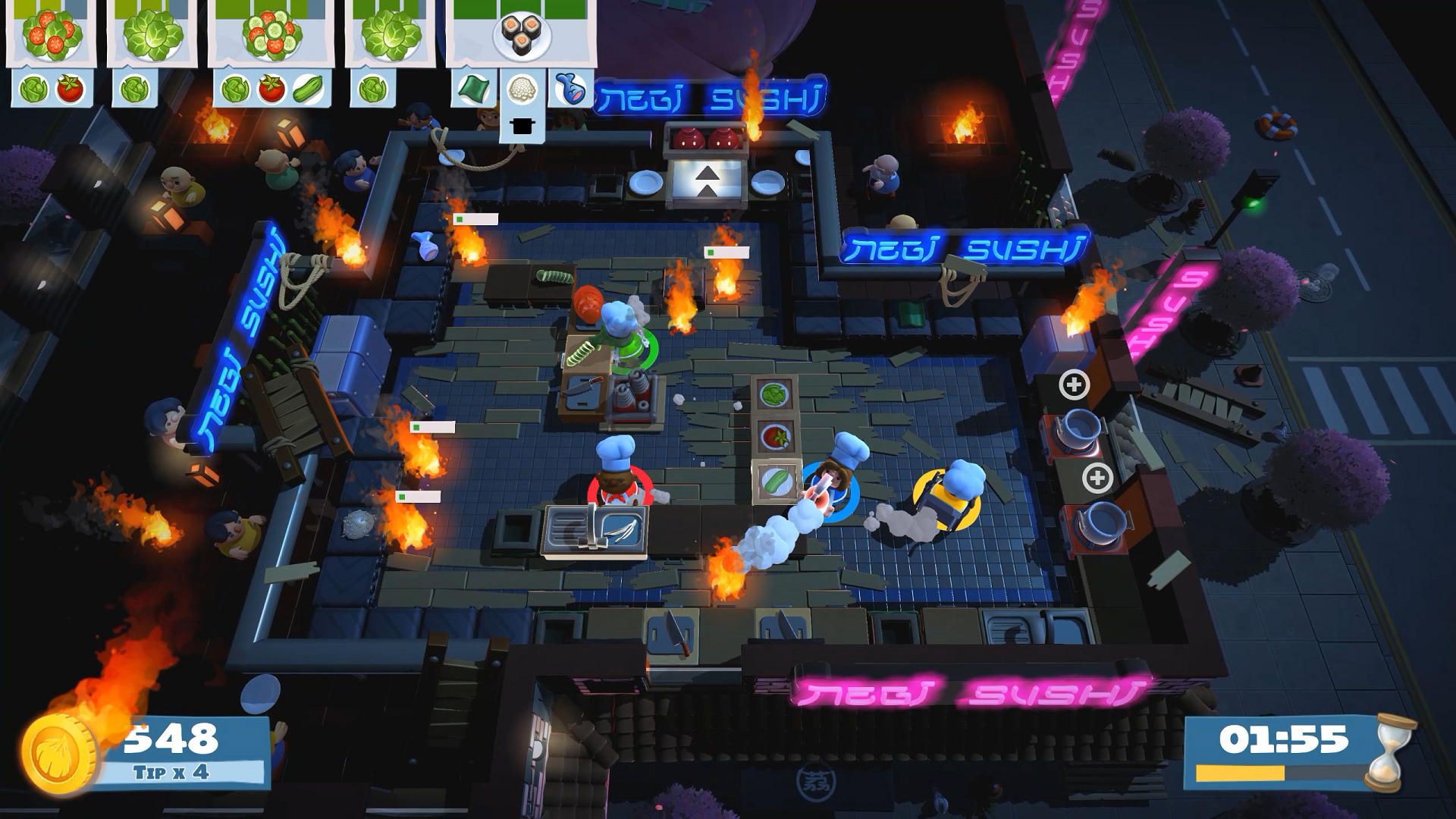 If you’re looking for stuff to do outside of campaign missions, the game has a versus mode as well as online versus. Online versus is far less interesting than playing with people in a room, where you can quickly communicate and, well, shout at each other when things go pear-shaped. Online doesn’t support voice chat, so you’re relying solely on someone being as keen on success as yourself, otherwise it quickly descends into chaos. It’s still fun, but not nearly as much so as playing offline with friends.

That being said, if you can get a good group of people together, the online co-op campaign can be a really great way to try and aim for those pesky four stars. There’s a great community online, and while working together is difficult when not together, like-minded players are out there and it’s a rewarding experience to reap the satisfaction of perfecting those difficult kitchens together.

While Overcooked 2 doesn’t weigh itself down with the same level of problems as the original, there’s still plenty of niggles along the way. Some bugs can be funny, but some are downright frustrating and potentially, can halt a really good streak. Ingredients get stuck and cooks get jammed on occasions, and more frustratingly, it’s sometimes hard to accurately grab things because the buttons just aren’t responsive enough. This was a problem in the first game, and unfortunately, it’s ported over (albeit to a lesser extent) to the sequel.

Overcooked 2 is a better game than the original, and that’s a fact, but whether it’s as enjoyable is up for debate. Far more interesting, great new dynamics and a bounty of content will keep me playing for months to come, but sometimes, sometimes I’ll dust off my copy of Overcooked 1 just to remind myself what made me love this series in the first place.

Time to don your apron and save your kitchens from dish-array; the Overcooked series is still the best co-op experience available.