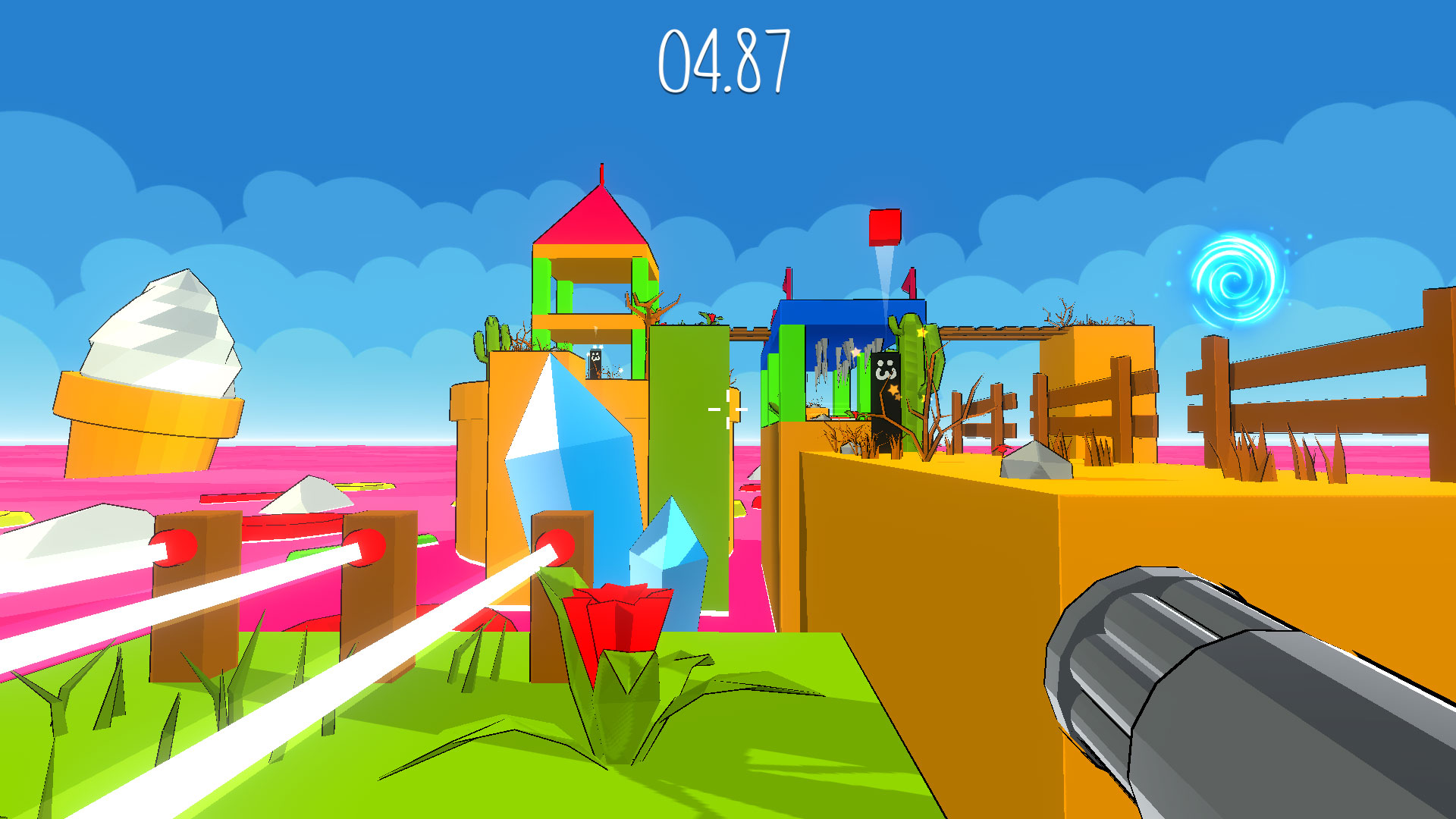 Ratalaika Games know their niche and that is, most certainly, easy Platinum trophy titles. This weeks entry is Bouncy Bullets, a game which sort of does exactly what it’s called.

Bouncy Bullets is a puzzle platformer where you need to make your way across the landscape towards a portal to complete the stage. On the way, there are objects to shoot with your bouncy bullets and that’s it. It sounds simple enough and that is what Bouncy Bullets is, a pretty simple platformer where you run/jump/shoot your way to the end. There are six chapters across two game modes totalling 84 levels. Like most platformers, you have to run over or sometimes jump to a platform and keep doing that until you reached the exiting portal.

As you progress, more objects get introduced. At the beginning, 4 different coloured characters appear. The pink and yellow characters need to be hit with their corresponding coloured bullet to destroy them. There is also a grey hostage character who you shouldn’t shoot; if you do the level ends. Additionally, there is a black enemy who can be hit by either bullet. If you get hit you die, so it’s advisable not to stay in one place too long. Further on you will come across a character which changes between pink and yellow, so it makes it a little harder to beat. Spikes come into play, which is the staple of most platformers. There are also trampolines that take you to higher ground. Lasers also make an appearance, so there are more than enough obstacles to keep you busy. Yes in Bouncy Bullets, your bullets will bounce off platforms, it’s a skill you will rarely utilise on purpose though. 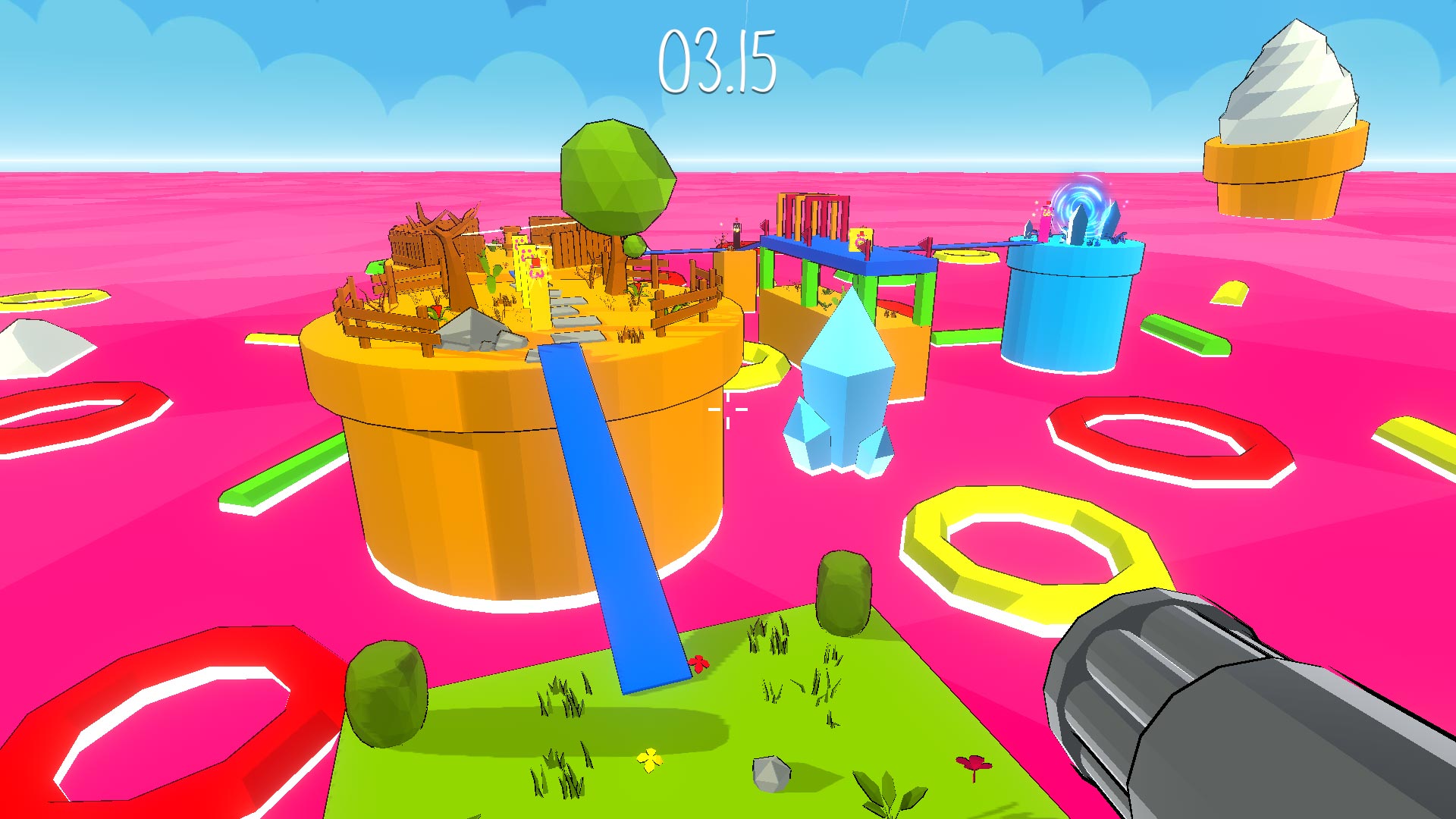 The levels in Bouncy Bullets are timed, so your speed is recorded and saved on an online leaderboard, it gives Bouncy Bullets a bit more replayability as you try to move up further on the leaderboard. There are stars awarded based on your speed but it doesn’t matter whether you get 1 or 3 stars, it doesn’t unlock anything in Bouncy Bullets. The special levels are the same as the normal levels besides the addition of few more enemies and traps like saws, it’s a shame really because some fun could have been had mixing it up in the special levels. Outside of the normal and specials levels there are no other playable modes.

Navigating around the platforms in Bouncy Bullets is fairly straightforward although the sensitivity feels too sensitive to begin with. This setting is adjustable but can make jumping up high more troublesome than it should be. The jump pads are quite annoying, if you move onto one you’ll get shot up into the air where gravity doesn’t work like it does in the real world. You’ll find yourself becoming frustrated with the sensitiveness of Bouncy Bullets. The enemies are not particularly challenging which seems to be a running theme throughout Bouncy Bullets. They shoot at you with no strategy so you’ll only die when you get hit by a stray bullet when taking a level for granted. 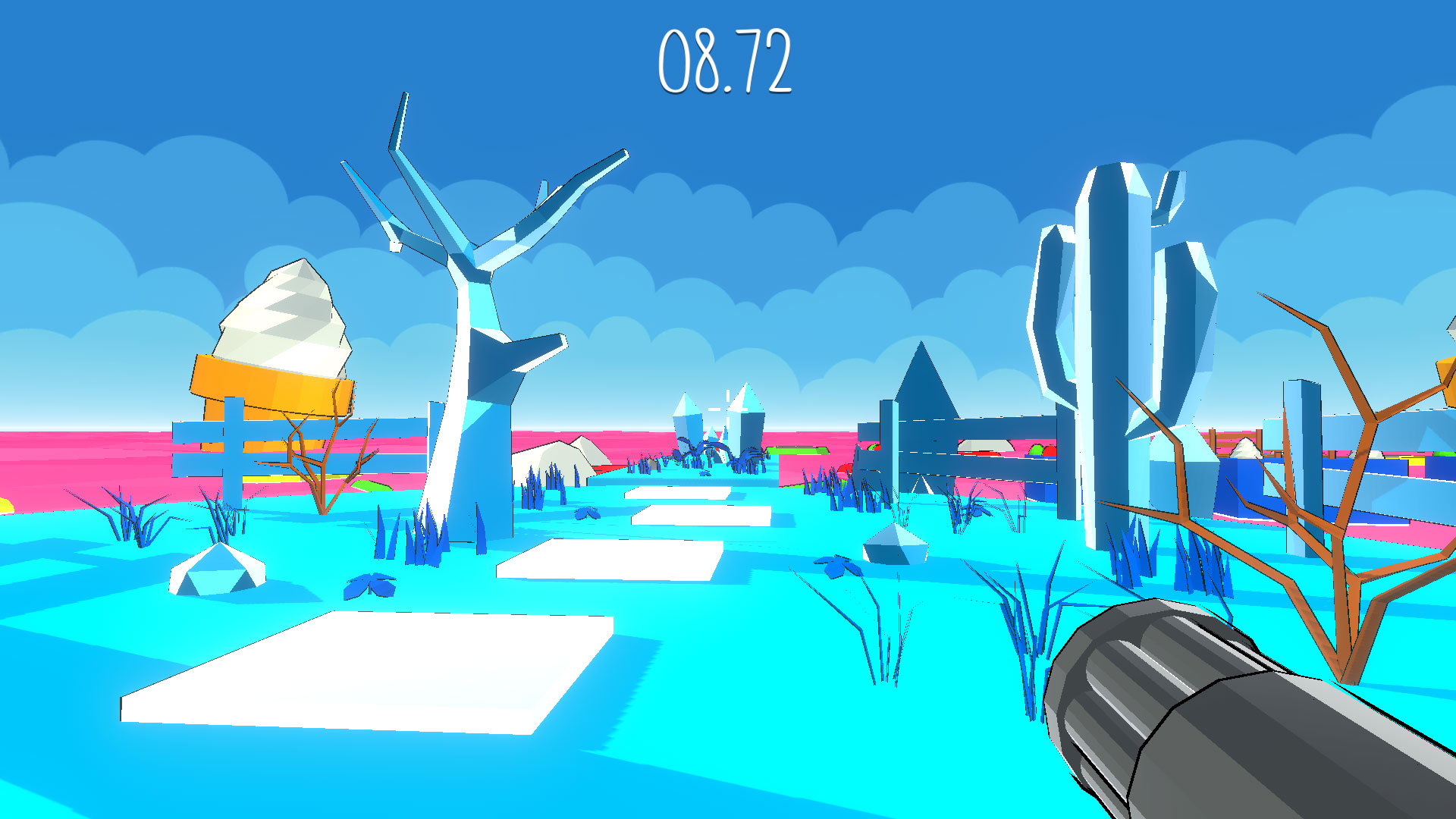 Graphically Bouncy Bullets is very bold and colourful, but there isn’t much design into the environment or enemies. The enemies are just piles of boxes with smiley faces whilst the traps are more of an eyesore. The big blocky colours work well on a platformer like Bouncy Bullets, but there is a lot of empty space going on. Musically Bouncy Bullets has an urgency to its tone which definitely fits in with what is happening on screen.

Bouncy Bullets is a very easy game, there is very little challenge. If you like fast paced platformers requiring little skill, then Bouncy Bullets is the game for you but after the first few levels the novelty wears thin quite quickly. The bouncy bullets feature could have been really entertaining to play with, but that’s not the case with Bouncy Bullets, it just lacks that umph that would make Bouncy Bullets a game to recommend.

Get ready to bounce your bullets in Bouncy Bullets.