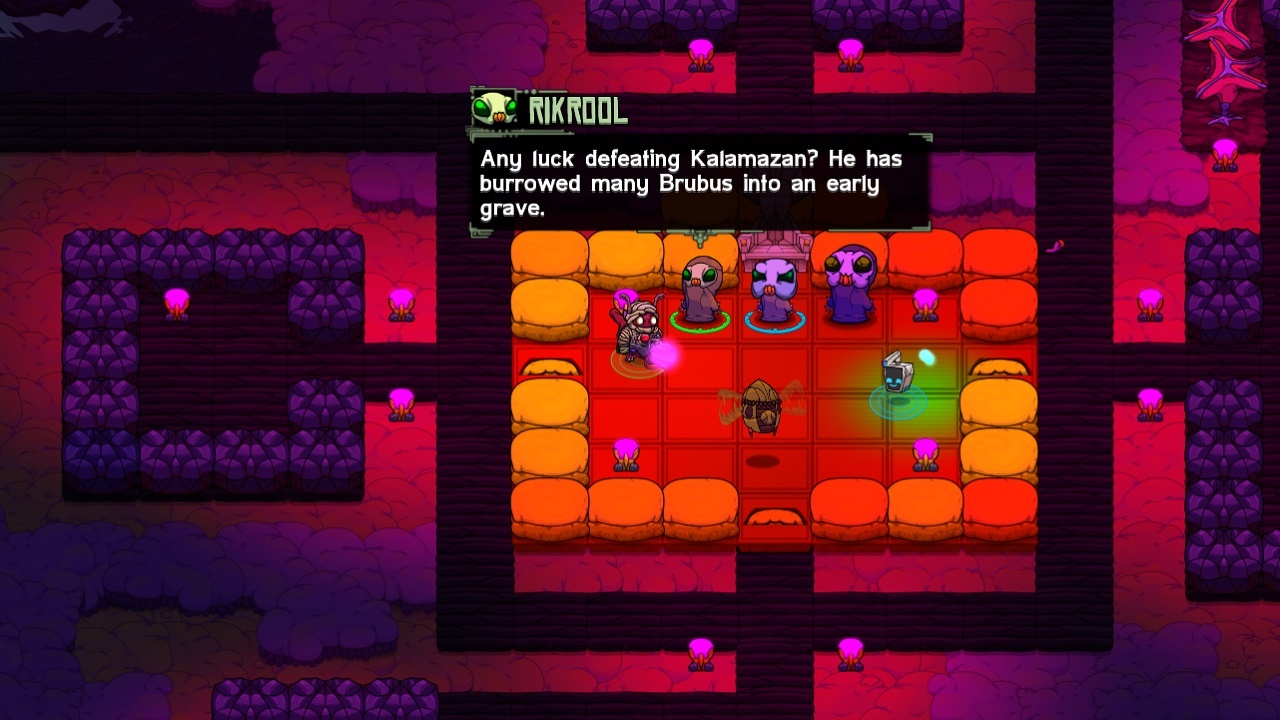 Crashlands is a survival action RPG  for iOS, Android, PC, and Nintendo Switch by Butterscotch Shenanigans, an independent development team of four from St. Louis, Missouri. While originally released in 2016, a Nintendo Switch version was added in 2018 with additional couch co-op features. Butterscotch  Shenanigans was founded in 2012 by three brothers and released various mobile games until 2016, including Flop Rocket and Quadropus Rampage. Since the launch of Crashlands, Butterscotch Shenanigans has been releasing regular content updates for the game, as well as working on their next project, Levelhead.

Crashlands thrusts the player into the role of Flux, an intergalactic delivery person on a routine assignment. When an evil giant floating head, named Hewgodooko, attacks his ship and steals its cargo, it crash-lands on the weird planet of Woanope. Flux must work with his robotic sidekick Juicebox and the locals of Woanope to recover the stolen packages, defeat Hewgodooko and save the planet. 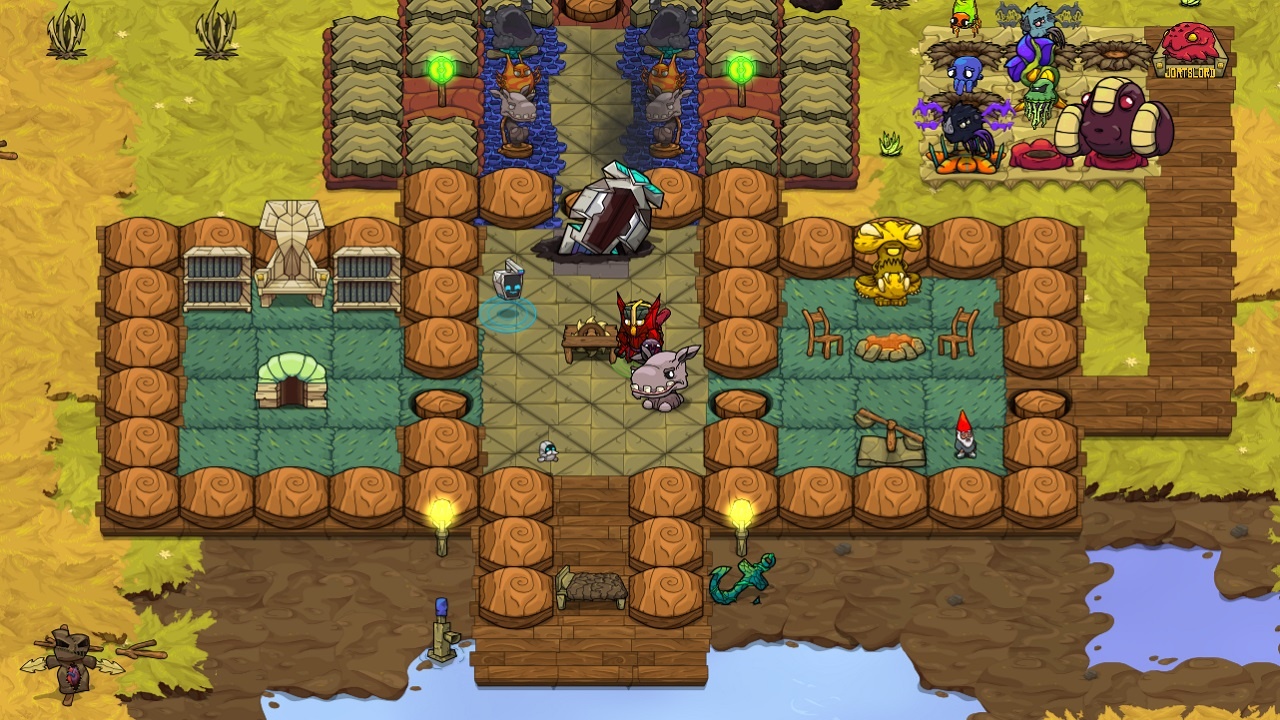 The locals of Woanope give the player missions: collect various resources, build something, attack enemies, etc. Flux then goes out into the 2D top-down world filled with dangerous lifeforms and plants to harvest. When completing these tasks, Flux is rewarded with new blueprints which would allow the player to build stronger harvesting tools and weapons.  This creates a general game loop of going out to collect resources and using them to complete missions and upgrades and repeating to build your own unique base up along the way. This could get tedious for some players, but is ultimately fun and cathartic when the combat is firing on all cylinders. Unfortunately, multiple quality of life issues often prevents this. Each item takes a specific amount of time to craft, usually between 10 – 40 seconds. This wait is too quick to switch tasks but long enough to grind focus to a halt. Secondly, the timer in the game is based on in-game time, not real-time. When I missed one fish required for the main story, I had to play two hours of game time before I could finish the mission, instead of putting the game down for a night and coming back.  Finally, missions don’t post requirements or progress in the quest log. If you want to know mission requirements, mission progress, or where to start searching for the resources, you have to dive through tons of menus and figure it out yourself.

Being originally made for smartphones, Crashlands has some difficulty transitioning to a game controlled by a controller. The movement has been changed to a directional stick instead of tapping a location and tapping to attack enemies or harvest resources has been replaced with a button click.  These transitions bring advantages and disadvantages. The control stick allows the player more nuance in control, allowing for the character to turn on a dime, swinging away from an enemy to dodge and moving right back in to attack. However, this is more than weighed down by another issue. Frequently the game interprets button presses incorrectly. For example, when the player is in the middle of a battle with an enemy creature, frequently the game incorrectly interprets button presses as harvesting a resource on the other side of the map. This could lock you into an animation, stop you from attacking, or override your move inputs; all while an enemy is attacking, resulting in many cheap and frustrating deaths. 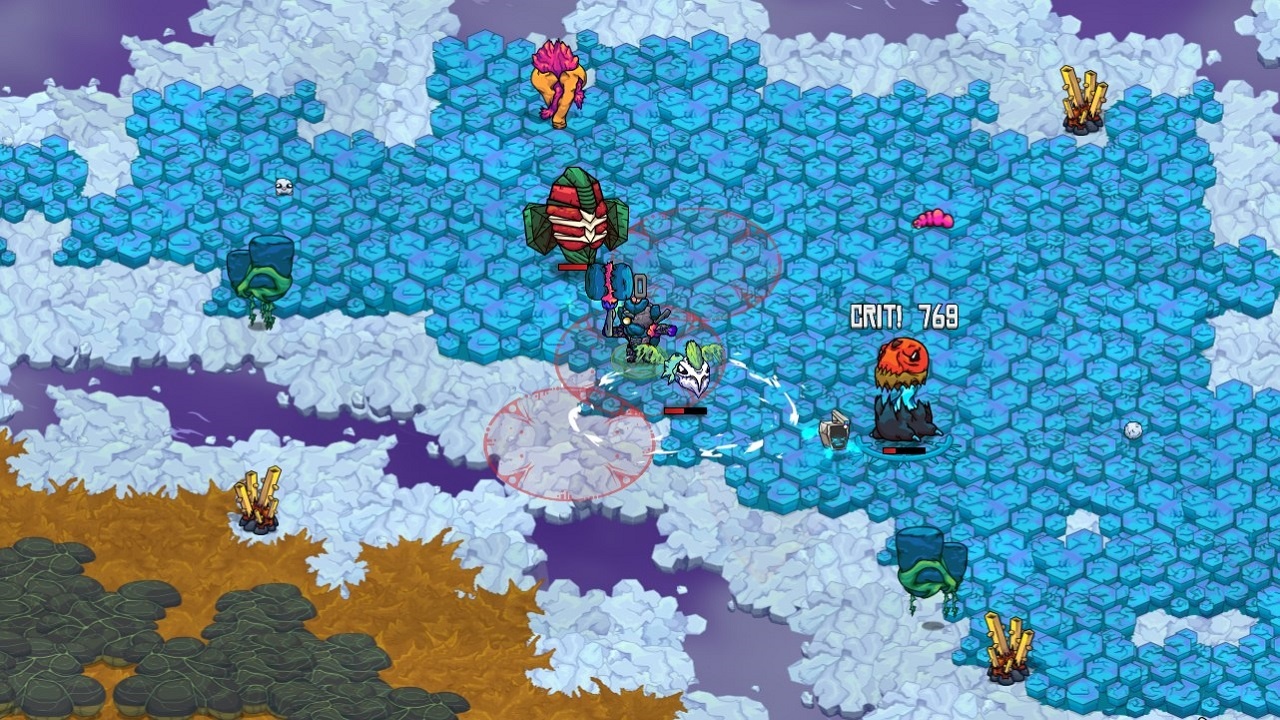 Crashlands‘s presentation is simple but pleasing. The music is simple and jovial, with unique themes for night and day and the animations are bouncy and lively, and its few cutscenes are used to decent effect. The standout, however, is the writing. The dialogue is humorous, but the real treat comes in the item descriptions. Some of these descriptions are out of left field weird, filled with non-sequiturs, irony, allusions and oddball enough to really add to the game’s personalities.

Crashlands is a fun time over its 30+ hour adventure but has multiple issues in pacing, quality of life, and combat controls. While the simple animations and audio design are fun, the best part of the presentation comes through the writing, which is creative, humorous, and distinct.  The combat can be the most rewarding part through its variety of combat options coming together, but pacing and control issues far too often prevent the game from reaching its full potential.  While I overall recommend Crashlands, these key design issues prevent it from being a standout experience.

Multiple quality of life, control, and pacing issues prevent Crashlands from living up to the potential shown in the game’s writing and combat.