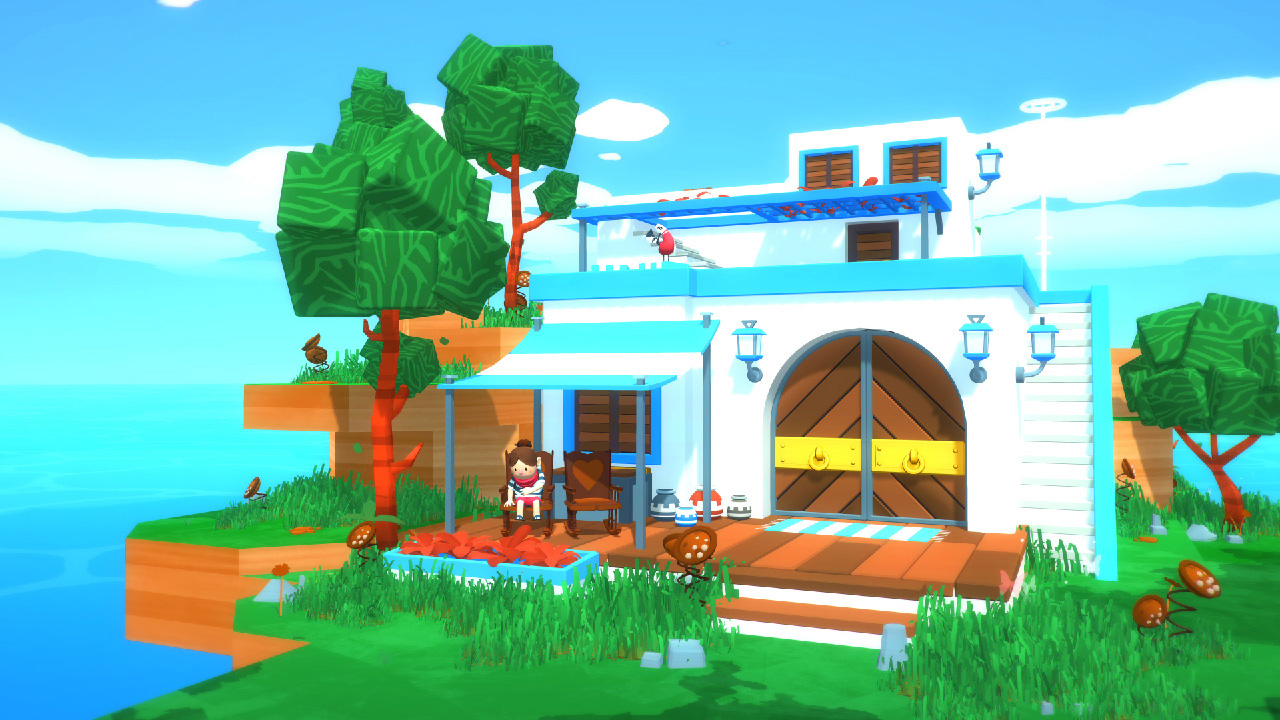 Love is one of the most dangerous concepts to go waving around in other people’s faces. Sure, there’s a good chance that you’ll find people who also love love, and then it just becomes this warm and happy positive feedback loop. And I’m not saying “dangerous” because of the dour and dark folk who believe that love doesn’t exist, those people won’t even bother to raise a hand to try and swat down the notion. But we all have our own interpretations of true love, and trying to shoebox or alter someone else’s perception of what is otherwise, healthy romance leads to a lot of distrust, resentment and anger. Solo: Islands of the Heart, attempts to help people better understand and reflect on their own ideas of love in a unique vessel, but whether it’s ultimately helpful or welcome is really a matter of opinion.

Solo: Islands of the Heart, comes to us from Team Gotham and Merge Games, and is a storytelling sort of experience that uses a series of puzzles and explorative tropes to allow a player to delve deeper into the ideas of love. The plot, for lack of a better term, is to set out and find your true love and match, which is already kind of an odd setting and will immediately turn away players who, again, are less interested in the idea of love. After choosing an avatar and either a binary or non-binary gender role, you enter into the main construct of Solo, which is completing platform-sequence challenges in order to awaken a totem-like figure and answer a question that it poises. Every question revolves around the idea of love, from the actions and behavior of your ideal partner to what your general thoughts are on certain love subjects, like distances, similarities and conflict. You are then given one of three choices for the answers, and that’s really all you have in regard to what you can say. If your opinion doesn’t match up with the totem, too bad. Pick the closest one and go from there. 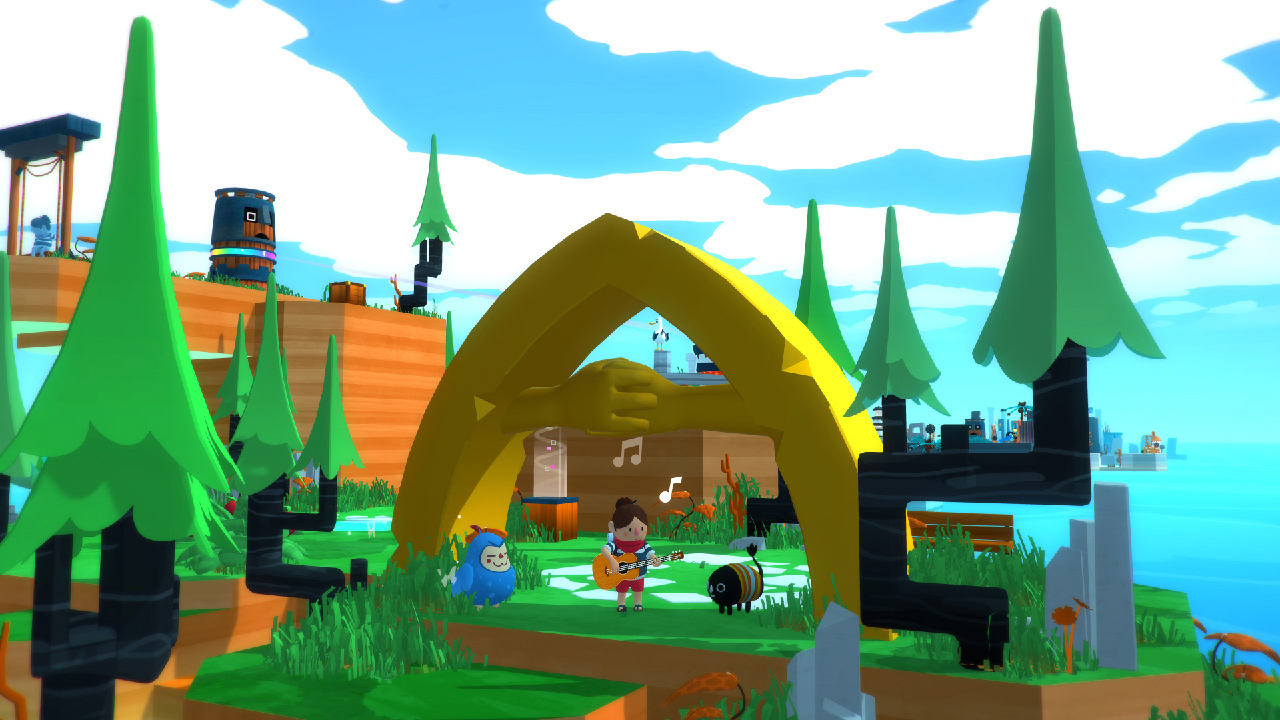 First and foremost, right off the bat, I think that Team Gotham should have either made this game more open ended in terms of interpretation and ideas or narrowed it further to simply fit what THEY wanted a player to feel or believe. If you aren’t someone who is already in love (either deep love and committed or at least loving from afar), then the game feels odd at times as the questions continually focus on a particular person or persons without really any intangental options. Moreover, when you do decide something, there’s this ghost persona that follows you around that occasionally helps with some puzzles, allows you to reset blocks, and, oh yea, judges you. It’s weird that the game would allow you to choose options that could potentially make your own views of love feel one sided or narrow, and then have a spiritual version of you try and shame your decision. That doesn’t feel good, and, since that is sort of the core to try and set this game apart from other puzzlers, it really takes you out of the elements.

As you may have noticed the plural “s” in Islands, it’s true that Solo: Islands of the Heart takes place across several different islands, chunks of which will emerge from the water as you finish each puzzle. The puzzle always means you needing to get to a small lighthouse, using that lighthouse to awaken the totem dude, and then talking to the dude for questions. To reach the lighthouse is…well, it’s a wide gamut of easy and frustrating. You usually need to stack boxes, with some boxes doing different actions (creating wind gusts, extending bridges, etc) and using your noggin on how to manipulate those blocks to get to your goal. However, early on, you get this device called the magic wand that allows you to grab any block that you can see on the screen, and a bit of difficulty dies with the bestowment of this item. Now you can cut to the quick and sometimes just move the same two blocks over and over to get to a goal instead of creating something complex and interesting. This, thankfully, is often counterbalanced by the camera and the controls actively fighting against you, causing you to zoom into pockets of sightless confusion or never being able to finely move the joystick slightly to the right or the left, meaning you need to often retrace your footsteps and go back over everything in order to get to where you want.

When I look at all the elements of Solo, I start to realize this game simply isn’t for me. There is this genuinely relaxing, melancholy soundtrack to help keep you in the mindset of someone searching for love, overcoming obstacles and figuring out difficult ideas in order to prove to themselves what love is and what love could be. There’s these soft, round graphics of everything, including random animals and plant people, that are genuinely cute and inoffensive that help to compliment the vast stretches of sea and the quaint setups of the mini islands. There are all these side elements that aren’t necessary to finishing the game whatsoever, but probably are enjoyable to a lot of people. You can pet a lot of dogs. You can befriend animals with bananas and other fruit. You can play your guitar and make people happy. There are these mini quests that you embark on that seem to serve no other purpose other than to make others happy and make you happy by proxy. There are these tents with notes that I guess you wrote yourself about love, and you can revisit them in your inventory over and over, as well as look at the selfies you took with animals and things on the camera that exists for some reason. You’re awash in these incidental, inessential tangents within the game, and they help to fluff out the length of the game, which I found staggeringly short for the price tag and even short for tackling something as dramatic as love. 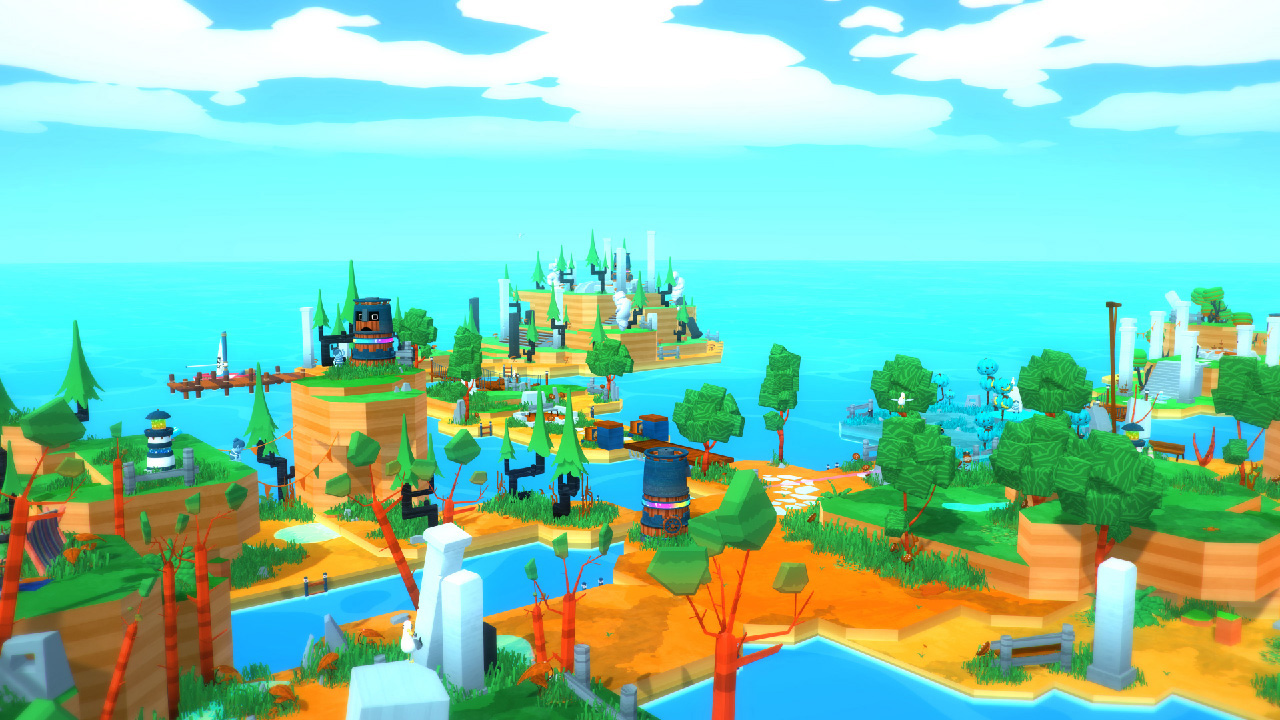 Lastly, I don’t think that the port is as well done as it could and should be. Solo: Islands of the Heart is a relatively tiny game, with no huge demands on your system or available memory, and yet there was constant stuttering and staggering even from starting up the menu. When I finally finished the puzzles and a new island rose from the sea, there were these hiccups that made me feel like I was running the game on a computer that was running too many background tasks, or I was using a graphics card that was the bare minimum requirement but not the recommended setting. But neither was the case: this was a digital download, on my Switch, from Nintendo’s servers, and it had issues that shouldn’t be present in any capacity.

Solo: Islands of the Heart is an experience for people looking for a particular angle within the world of video games. It tells a story without having a definitive plot, creates enough of a mechanical world to not be a flat narrative, and has enough cute distractions to allow people some freedom and creativity in their endeavor. However, for someone looking to DO something, it’s terribly empty in the realm of a goal beyond “find out about love.” It feels shallow to pan a game for its intended purpose, but I can’t sing praises and pretend that I enjoyed the message more or less because of the vehicle in which it rode. As someone already in love and fully aware of the complexity that comes with love, I don’t feel that Solo hit the notes I expected and it certainly didn’t keep me engaged with the gameplay. Feel free to explore it yourself, but, for someone who needs a bit of jazz in their games, I’ll be taking my ship elsewhere.

An art game with some puzzles to beef out the storytelling, Solo might navigate well for lonely heart players, but annoy those with a clearer compass.