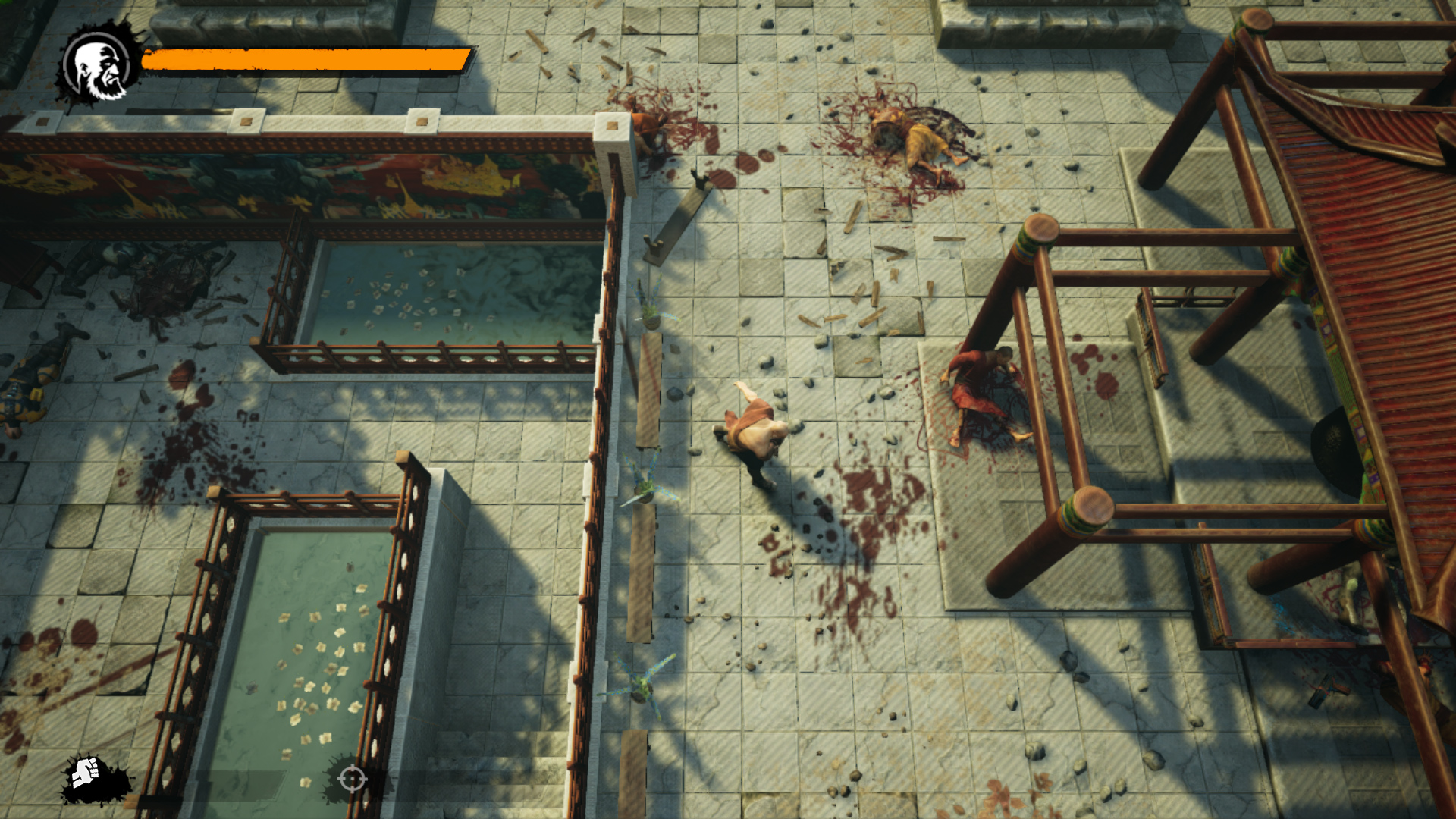 Well, they certainly don’t make them like this anymore. Sure, there are brawlers out there, but from its relatively simplistic design, po-faced tone, lack of loot and emphasis on uber violence, BUKA Entertainment’s enjoyably straightforward brawler feels like a video game from a different age.

Redeemer was released last year on PC to a relatively lukewarm critical response, and while this Enhanced Edition for Xbox and PS4 is hardly revolutionary, a number of quality of life improvements along with additional co-op options combine to deliver a more polished and enjoyable experience. It’s still fundamentally the same game, but the changes made in response to community feedback are all for the best, allowing Redeemer’s simple but undeniably gratifying old school charm to shine through.

And it really is charming…..in a violent and really silly kind of way. It won’t be for everyone of course, but for fans of arcade-style brawlers, Redeemer’s unique (well, unique in today’s market) tone and utterly streamlined mechanics will prove very appealing to a certain type of gamer. I honestly couldn’t tell you why I enjoyed it as much as I did, but there is something to its repetitive, blood soaked combat that put me in a bit of a trance. Perhaps it’s the fact that the stages never outstay their welcome, that the Achievements and Trophies are perfectly matched to the gameplay or that its combination of aggressive violence and basic but effective stealth works as well as it does, but whatever the case may be, Redeemer is one of those perfectly crafted little games that, while doing absolutely nothing new for the genre, manages to deliver a uniquely streamlined gameplay experience.

It’s not revolutionary, it’s not all that special, but y’know what, sometimes that really doesn’t matter. Redeemer: Enhanced Edition is fun. It’s big, stupid, unapologetic fun. Some might find that its rudimentary pleasures wear thin before the games’ somewhat short campaign comes to an end, but I for one found this a perfectly paced slice of old school arcade action. Sure, the 15 stages don’t take all that long to complete, and with no loot and little in the way of notable upgrades, this can feel like a one and done affair, but with solid co-op options and a decent range of difficulties, there is arguably more than enough content to warrant its rather modest asking price.

The story of Russian ex-mercenary, Vasily, whose idyllic life as a monk in a Shaolin temple goes up in flames (quite literally) when his violent past comes back to haunt him, is invariably utter mince, but despite the absurdity of the narrative and the general lameness of the delivery, it all feels perfectly fit for purpose and cheesily deliberate on the part of BUKA Entertainment (I simply have to believe that they knew what they were doing when they gave the supposedly Russian, Vasily one of the most American sounding accents that I’ve ever heard). Whatever the case though, it’s all nonsense, and more importantly, incredibly brief. There is a story of sorts here, and there is the occasional bit of dialogue, but this rarely goes far beyond the kind of narrative depth you’d find in a Double Dragon or Streets of Rage. Like any brawler worth its salt, Redeemer is all about the gameplay, and despite its total lack of ambition, it totally delivers where it counts.

Despite there being plenty of guns in the game, Redeemer is a classic brawler at heart. Sure, you can pick up guns dropped by enemies, but most only have a few rounds and it’s never more than a few seconds before you’re back to your fists or some sort or rudimentary melee weapon. Saying that, whether you’re using the very basic melee combos (switching between punches and kicks appears to make very little difference), clubbing somebody over the head with a stick or using the simple twin stick controls to pump lead in the bad guys silly enough to get in your way, it all comes together to deliver a brilliantly violent and utterly cohesive experience, one that encourages aggressive environmental kills and enemy management above elaborate combos or special moves.

Again, it’s all super basic, but when combined with its simple but extremely effective stealth kills (there is something outrageously and disturbingly rewarding about snapping necks in this game), Redeemer’s cartoonishly violent gameplay manages to find a rewarding flow, one that ensures that the game remains entertaining well beyond those first few hours. Could it do with a bit more depth? Probably, but going beyond the basic upgrades that improve the strength of your core abilities and add a handful of new moves to your basic repertoire of attacks, adding additional systems and upgrades would only serve to dilute the purity of the experience. There are times when Redeemer feels a bit like Diablo III without the loot, but unlike that game, pausing this to upgrade your equipment would arguably ruin the flow of the game and ultimately reduce the focus that essentially makes it stand out from the crowd. It would arguably ruin co-op too. It’s simple, throwaway stuff, but it works superbly well, and honestly, who wants to be shifting through loot when you’re busy killing evil Russian types with your buddy (I’m pretty sure they are Russian……it really doesn’t matter).

It’ll likely be a tad too basic for some, but for those looking for a genuinely old school brawler, BUKA Entertainment’s, Redeemer: Enhanced Edition will likely scratch that retro itch. It’s relatively short, the story is cobblers and it could certainly do with a wider range of enemies and locations, but honestly, it really is loads of fun. The simplistic combat and basic but perfectly implemented use of stealth combine to deliver a brawler with a fantastic sense of momentum, one that never lets unnecessary extras get in the way of its gameplay or sense of progression. It’s unlikely to keep you enamoured in the long run, but for as long as it lasts, this uncomplicated throwback is likely to provide plenty of entertainment.