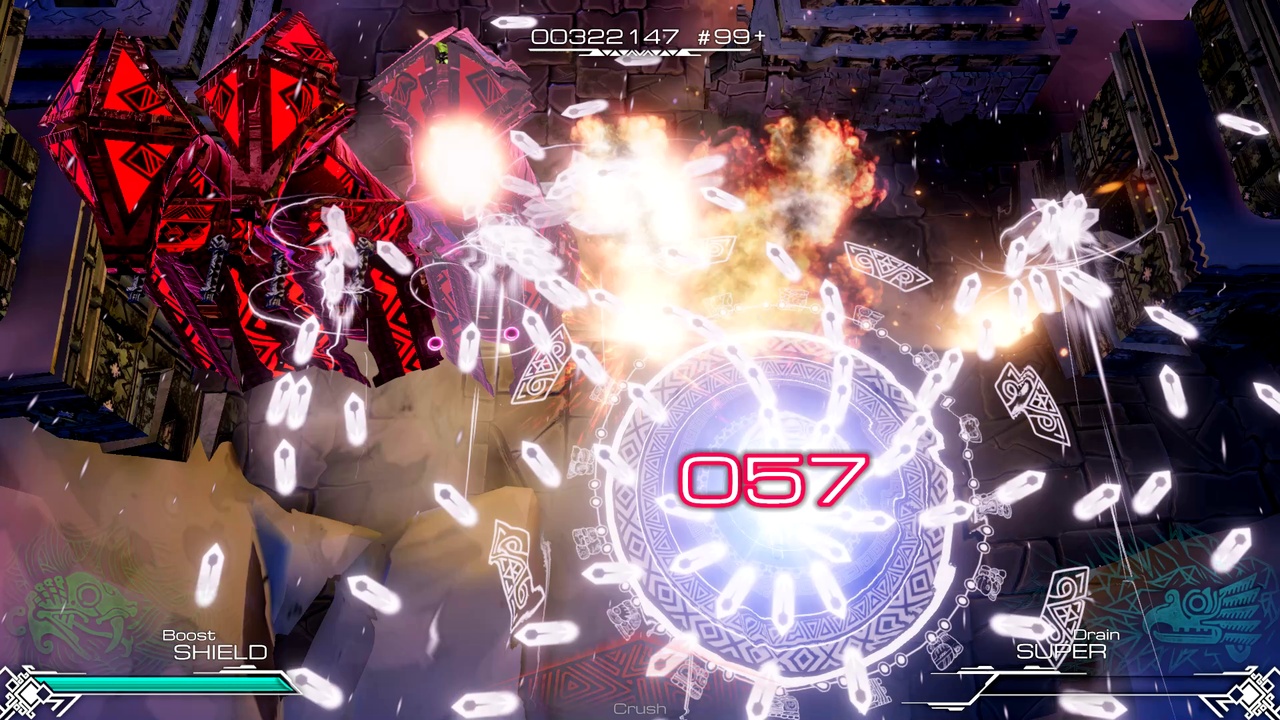 There are many elements that satisfy us needy gamers within video gaming. It could be reaching the culmination in an epic journey or adventure, for others it may be achieving the highest score, but for me, it’s about beating the challenges that these forms of entertainment lay in front of us. It can be a simple thing, such as completing a complex Picross, or something that requires a bit more work and effort, like completing Dark Souls for instance (something I’ve yet to achieve, for the record). However, some games are so satisfying, that they contain all of the above elements within their challenge, namely a satisfaction in conclusion, reaching a high score and beating a particularly tough game; all in one package. One such game comes in the form of Manufacture 43’s Pawarumi as it launches a bullet-hell upon the Nintendo Switch.

This futuristic shmup, or shoot ‘em up, merges a sci-fi setting of neon lights and Dune-esque landscapes with an inspiration of the ancient world of the Aztecs or Amazonians. By this I mean, some of the architecture and elements within the game hold a very distinct South American feel, yet places you within the seat-of-your-pants fighter in one of the most forward-thinking and brutal shooters I have ever played. You play the role of Axo, who is the pilot of the Chukaru; a versatile fighter with a unique three-way weapon system. Without giving the story away, you embark on a journey of revenge and retribution as you fly through a series of three difficulty levels across fifteen levels of varying degrees.

Primarily a top-down shooter, you control your fighter to manoeuvre your way around the screen, as you seek to destroy a variety of enemy craft and dodge their oncoming attacks of bullet-hells and missiles. In terms of playability, this contains the same, good old-fashioned mechanics of any arcade-styled shmup. However, the developers have taken a few of its elements one step further to produce a very different take on its genre and ultimately, have produced one of the most satisfying shoot ‘em ups I have ever played with an interesting mechanic that forces you to think and act, a difficulty curve that sets you up perfectly for the later challenge and a cinematic feel that can easily match any Hollywood blockbuster. 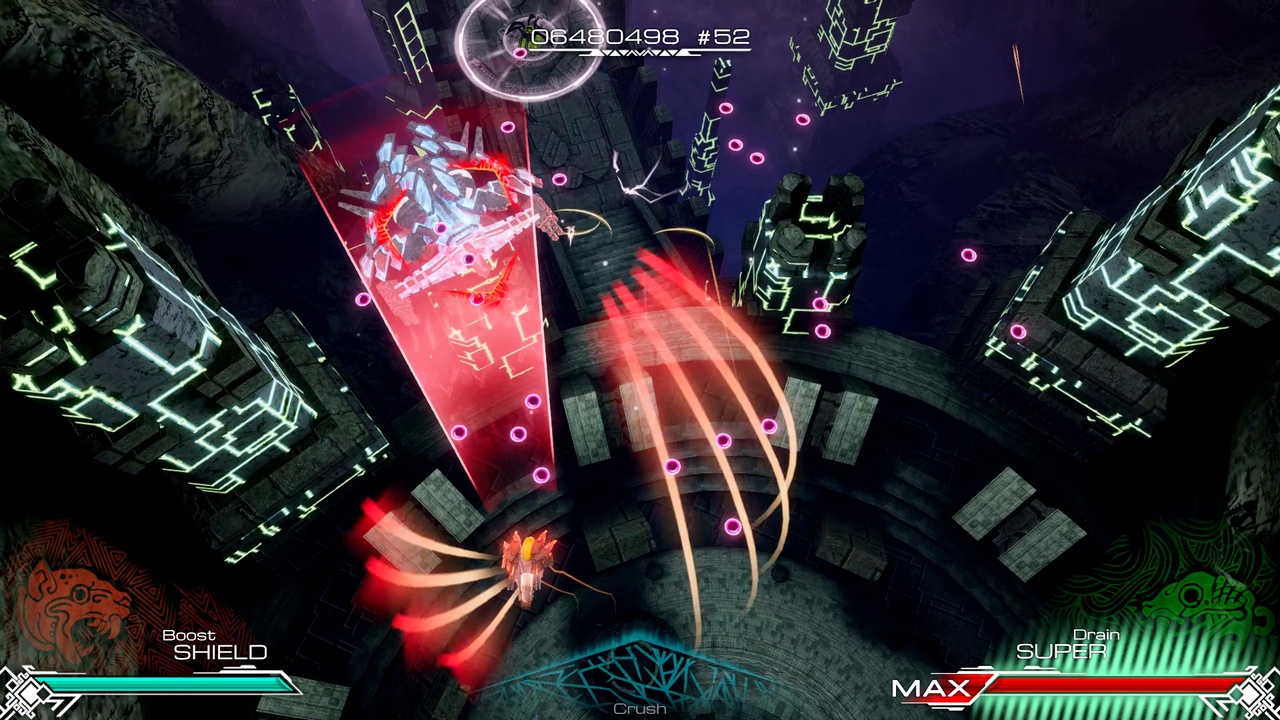 The idea around its central core works on a rock, paper, scissors style of play. Your craft, the Chukaru, contains a trio of weapon styles, known as the Trinity Mechanic. This in essence presents you with three styles of weapons, each one of them colour coded to represent their most effective use. Each of the enemy types that you encounter are also colour coded, meaning that different weapons have different effects on different enemies. There are three main functions at work here, one involving your shields, the other working on your special ability and the final one maximising damage.

Its simplest form comes in the replenishment of certain functions. Find yourself low on shields? Then destroy green enemy types with your green weapons, red on red and blue and blue and your shields recharge. Need extra energy to fill your special ability meter? Then use a red weapons on a green enemy, or a blue on red or a green on blue. In a reverse order, using a green weapon on a red enemy, or red on blue and blue on green, will maximise your weapons effect and deal greater damage than other combinations. It sounds confusing, but in reality, is quite a simple function to pull off; largely thanks to a clever and simplistic control scheme that is easily labelled.

Each of the coloured weapons are bound to a specific key type, namely Y, B and A, with X unleashing your most powerful weapon, the special ability. However, along the bottom of the screen, each colour is positioned from left to right, their positioning detailing the layout of the keys that correspond to them. It’s certainly a mechanic that forces you to think about your actions whilst you keep one eye on the on-screen action. You may want to deal damage, but you know that a boss-fight is imminent and you need to replenish your shields and ensure your special ability is maximised. It creates a tension and urgency to the gameplay that matches the mayhem of the bullet-hell difficulty that the enemy throws at you. 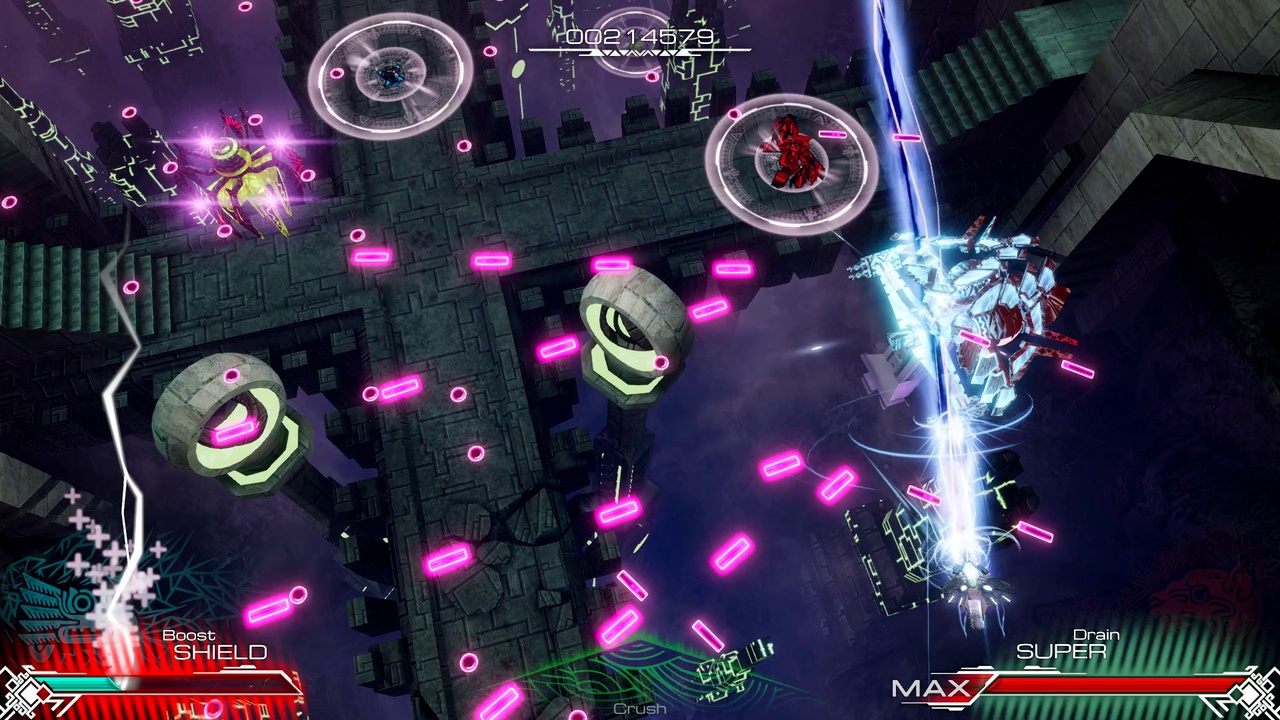 I won’t lie. This is a gruelling game, but not one that is impossible. The developers have designed it so that your journey begins on the easy setting and advances through normal to hard. It’s been set up in such a way, that playing through each difficulty doesn’t mean that you’ll be playing the same game over, as each difficulty setting contains a differing set of levels to play through. Ingenious! It’s a system that sets you up well for what you are about to embark one, with the easy setting providing a decent challenge and offers a chance to get to grips with the game’s mechanics. Normal and hard though, well they’re guaranteed to make you sweat and are a hardcore shmup player’s dream. Honestly, if shmups are your thing and you’re looking for a challenge, then Pawarumi will deliver in spade-fulls.

As well as an intensity in gameplay, the game also looks the part too, with some stunning sceneries, graphical presentations and an overall feel of something spectacular with some varying camera effects that give the feel of blockbuster title. Everything here is highly detailed, bright and colourful. However, at certain times, the camera pans and zooms from a top-down setting to a third-dimensional view that sees you flying through canyons and over lush forest canopies, as your fighter twists and turns impressively in-and-out of the screen. You don’t play in these views, but it creates a very effective atmosphere that is truly cinematic in its execution. Another nice feature that the developers have incorporated on the Switch, is the ability to fly another craft called the Joyful. Although essentially the same craft as the Chukaru, this ship takes on the colours of whatever joy-cons you have attached to your Switch; producing some nice variations dependant on what colours you click into place. It’s only a gimmick that adds nothing extra to the overall game, but is still a nice thing for us Switch owners nonetheless.

Overall, Pawarumi offers one the most unique, difficult, tense and strategic shmups that the Switch has ever seen. In fact, probably that I have ever seen too. It’s immensely satisfying, especially as you begin to scale its difficulty curve and beat the living daylights out of the thing (although, much like Dark Souls, I’m yet to beat its hardest difficulty). The Trinity Mechanic offers a unique variation within its genre, one that forces you to think of your next actions. It performs and looks stunning too, with some beautiful landscapes and cinematics that truly propel the game to another level and a smoothness in response that ensures you dodge those bullets with silky skill. If you’re looking for a game that will satisfy your need to achieve the highest score, beat its difficult challenge or just provide a stellar experience, then go buy Pawarumi, you won’t regret it.

Pawarumi delivers a gruelling, yet satisfying shmup that comes straight from bullet-hell.