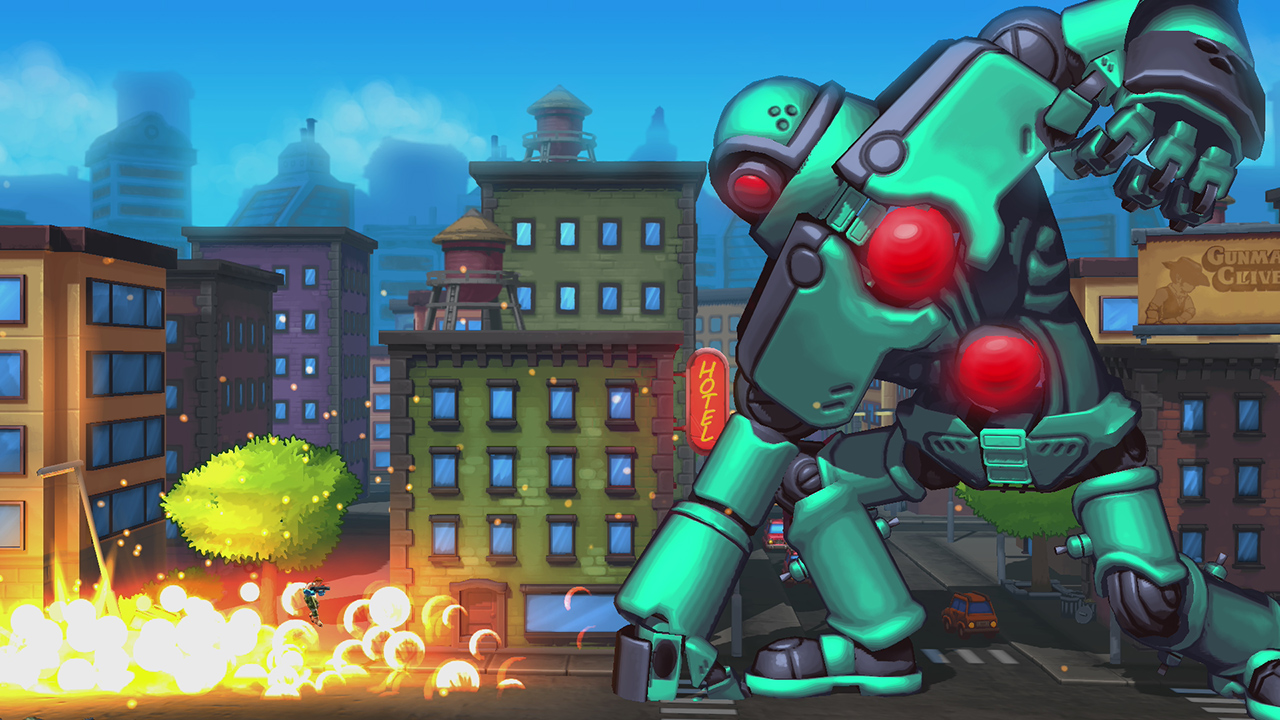 Mechstermination Force is that Saturday morning cartoon that makes no sense at all, but you like it because it has lots of action, memorable characters, a catchy soundtrack and the artwork is good. On top of that, good luck trying to find a coherent plot tucked away in there. This game not only manages to entertain for hours, it just happens to hit on all the nostalgic notes of dumb, but fun action movies.

The basic plot of the game is a joke on the action genre in general, but it plays it on the nose. The world is in massive danger from an invasion of giant mechs and only you are left to save it from its doom. Does the game provide you a ragtag squad of soldiers to follow your lead into battle? Nope. The reasoning behind this is the last battle took out all of your forces and only YOU are left to become humanity’s last hope. Again, this game doesn’t pull its punches when dishing out the endearing, yet cheesy feel of a solid arcade game.

You’re able to choose from one of four avatars, but they all play the same; they are just differently skinned. There’s the typical front line soldier guy, with headband and no shirt. The next character is a regular tank top fitted soldier, just thrown into this mess as ordered. The other two characters are female soldiers that are dressed appropriately for this war setting.

Game play is basic, but it’s a solid formula. As a throwback to the PS2 classic, Shadow of the Colossus, it’s just you vs. a giant mech that wants to end your life. You’re able to dodge, duck, and even precision aim your weapon, doing anything possible to take down this behemoth of machinery. There are no minions for the giant mech boss to send at you, but be prepared to fight for your win.

Combat is a basic, but solid formula. You start the match, the giant mech starts blasting you with everything it has, and you proceed to defend yourself and take it down. You are able to damage different parts of the mech. This results in collecting coins that you can use to buy new weapons, but this will be touched on later. Each mech has 2 sets of weak points. The first set of weak points are indicated as yellow, which will help destabilize the mech overall. The final set of weak points are red, but normal damage will not affect it. Instead, you must execute an effective, yet comical melee attack to end it once and for all. I say it’s comical because once you hit the melee button, your soldier just happens to have a giant guitar or baseball bat they pull out of their pocket to give the mech a good wack. A couple of hits and it’s game over for the robot. 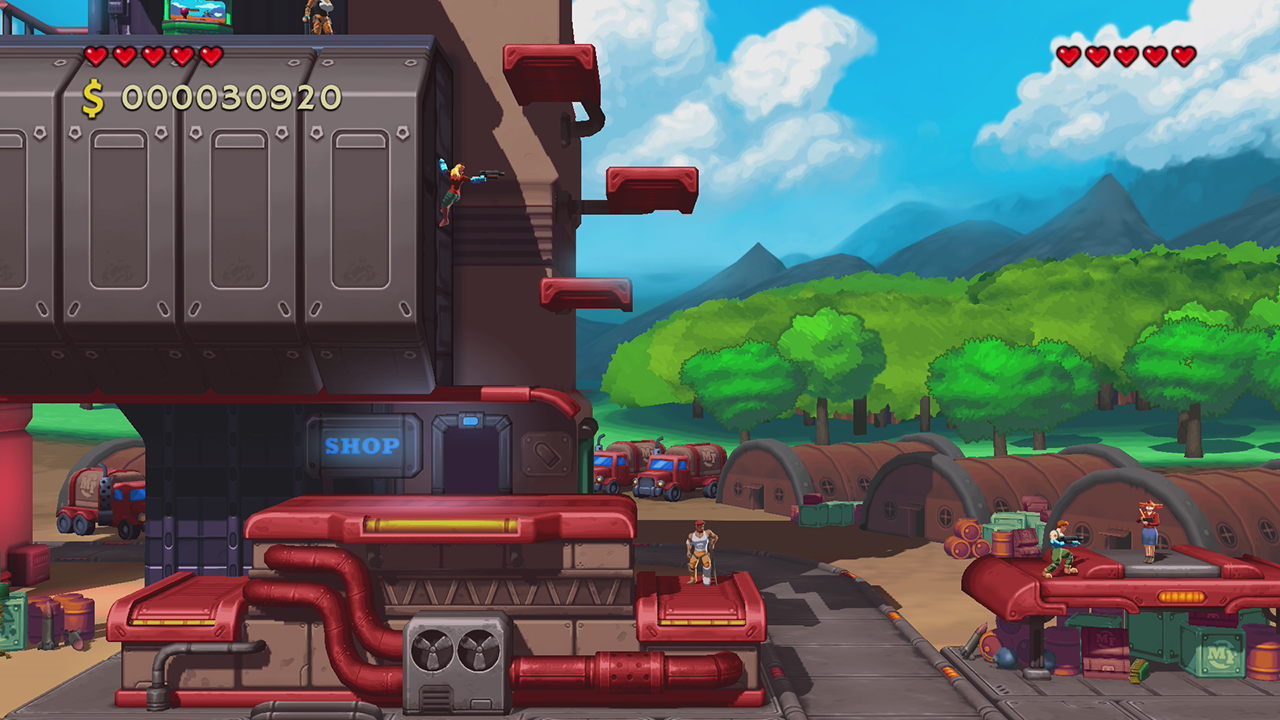 Another part of Mechstermination Force is the home base. From here, you’re able to replay missions, talk to NPCs that provide insight into the world’s status, take on new missions, and buy new weapons.

Layered with the platforming, your character is able to upgrade weapons through collecting currency. You are able to gain money through damaging parts of each mech boss or replaying missions. After each mission, you are graded and it is determined based on time of completion and damage taken. Minimize these two factors to maximize the amount of money you get.

With the money, you’re able to upgrade your weapons, such as a flamethrower or a rocket launcher. During my play through, I didn’t notice any significant damage boosts, but I did take note of the different effects it has on weapons. For example: one boss I was fighting had the typical spread fire damage of energy balls. My flamethrower cancelled them out, I ducked a second one, then went straight in to hit the weak spot of the giant mecha.

The soundtrack of Mechstermination Force is wonderful to the ears. It reminds me of the 80s Japanese arcade games like Ninja Gaiden or one of its heavy influences, Contra. It sets a good tone for each engagement you jump into, motivating you to do everything you can to stop these mecha monstrosities. 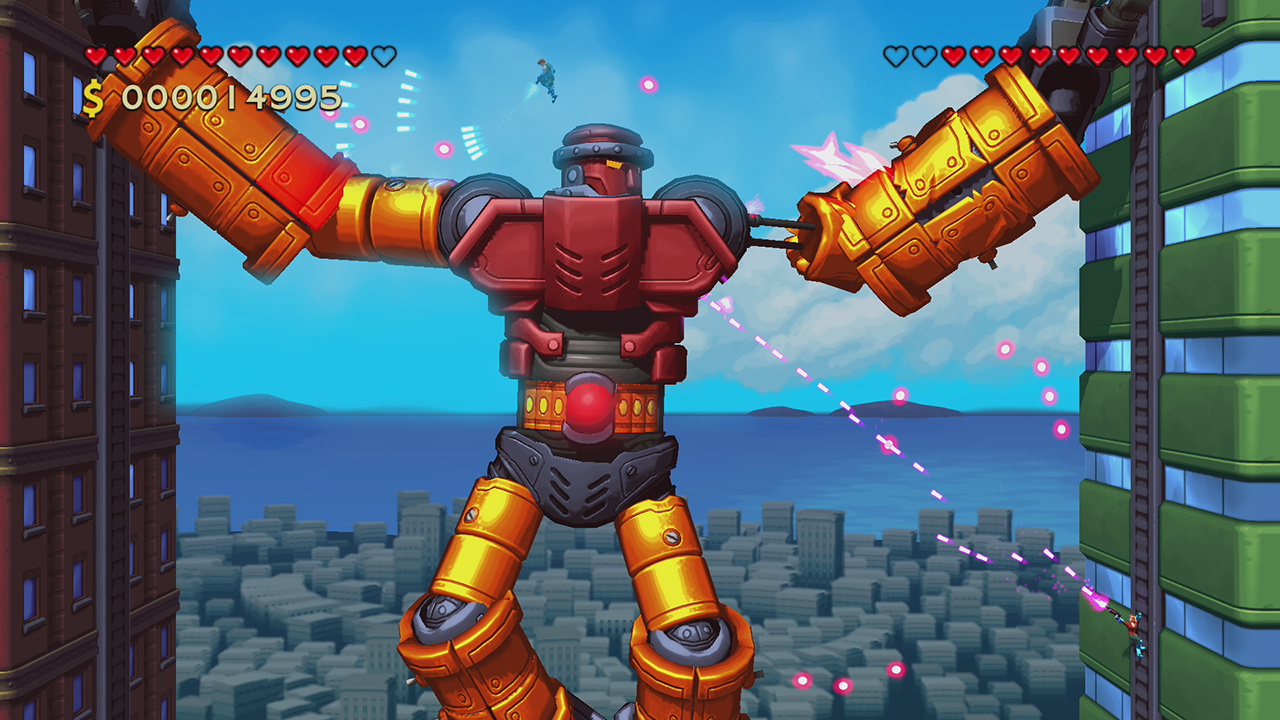 I can’t complete this review without bragging about how fun the artwork is. It’s all 3D rendered, but it’s superior in its design. Each different setting that you fight at has a story to tell, from the downed mech suits in the Russia-like setting against the mecha centipede, to the normal cityscape of the punching mecha. It makes me eager to learn more about the world established, despite the game being surface level.

Though Mechstermination Force does manage to bring a valuable worth of entertainment, it does have some minor flaws. Arcade games of the 80s and early 90s were notorious for being difficult, so get used to dying a lot to figure out the pattern of defeating a boss. The only other thing I didn’t care for in this game was how short the tutorial was, but that can be defended with how simple the game play is. Game play can be repetitive and can test your patience, but this game is good for small bursts of downtime, especially with the versatility of the Switch, being able to pick it up and go as you please.

The cherry on this mecha slaying cake is cooperative play. You and a friend can tag team these mechas together, making it less miserable while fighting the good fight. You are able to share or gain as much coin as possible to expand your arsenal and continue your fight.

Mechstermination Force is a love letter to fans of early arcade games, Saturday morning cartoons and dumb action movies. It doesn’t hold back on zany, but accomplishes its goal of being fun. I will keep a close watch on this developer in the future, crossing my fingers for a sequel. If they manage to make a follow up to this game, I would like the option of expanding the skill set of each soldier, or even take the traditional route of somehow reverse engineering the downed mecha to make better weapons against the next colossal threat.

Given all of its flaws and strengths, I’d highly recommend Mechstermination Force to any Switch fans’ library. The replayability is high, coop is solid, and it’s a good way to kill some time on a trip or even on a lazy afternoon. It’s 11.99 on the Nintendo Store, but it’s well worth the money and time.