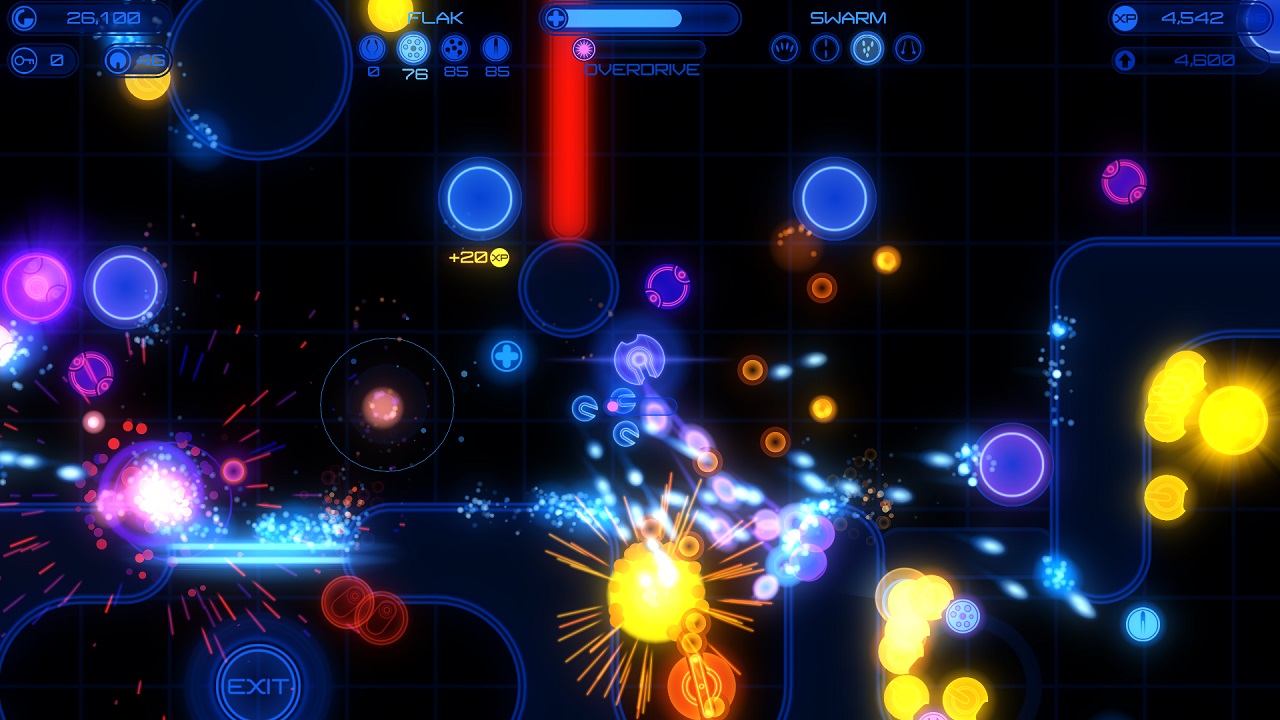 Radiangames is a name that might sound slightly familiar to any well versed gamer, as they are a well known but not necessarily monstrous presence on the mobile circuit. For several years now, Radiangames has put out a series of engaging and addicting arcade-style games, taking some already great ideas and presentations and upping the impressiveness by making it work on mobile phones. I, myself, own several titles, and have put plenty of time into the Inferno series, which is probably the cornerstone of Radiangames’ namesake. Now, one of the most well-known titles is transitioning off the phones and onto consoles, as we all prepare to see how Inferno 2 fares.

Inferno 2 is a storyless twin-stick shooter with RPG elements, though I hesitate to use that last descriptor in such a way. You take the role of an aesthetically pleasing fighter ship, blasting your way through rounded corridors and taking down various enemies of different geometric proportions. Along the way, you pick up several variations of powerups that allow your ship to become the machine that YOU want it to be, whether you prefer something that’s a bit faster, hardier, or just shoots a ton more. There are missiles to act as secondary weapons, special Overdrive abilities to give you a temporary edge over the competition, and interchangeable primary weapons to mold your reaction to how the game pitches itself. With over 80 levels and three difficulty levels, there is a ton of replay available for this title IF Inferno 2 jives with you.

Right out the gate, anyone who’s played Geometry Wars in years gone by will have a distinct, pleasant reminder about some of the successes of shooting games in the early 2000s. Inferno 2 has a great balance of simplicity and detail, mixing in very minimalist enemies and power ups with bright, grabbing neon coloring and design. From a technical and artistic standpoint, it’s a joy to slip into the shoes of Inferno 2 and begin blasting the hell out of everything as soon as you can. There was a bit of confusion, initially, because I felt that some of the purple exploding mines looked very similar to the purple, non-exploding item chests, so players who are eager to dive in will want to be sure to take a moment and breathe before going too hard. Still, you quickly understand the difference in enemies, from the round, kamikaze drones to the slightly more helmet-like sentry shooters, and, eventually, the toxic green onslaught. There’s a bit of everything here, and you’ll learn to love to shoot it all. 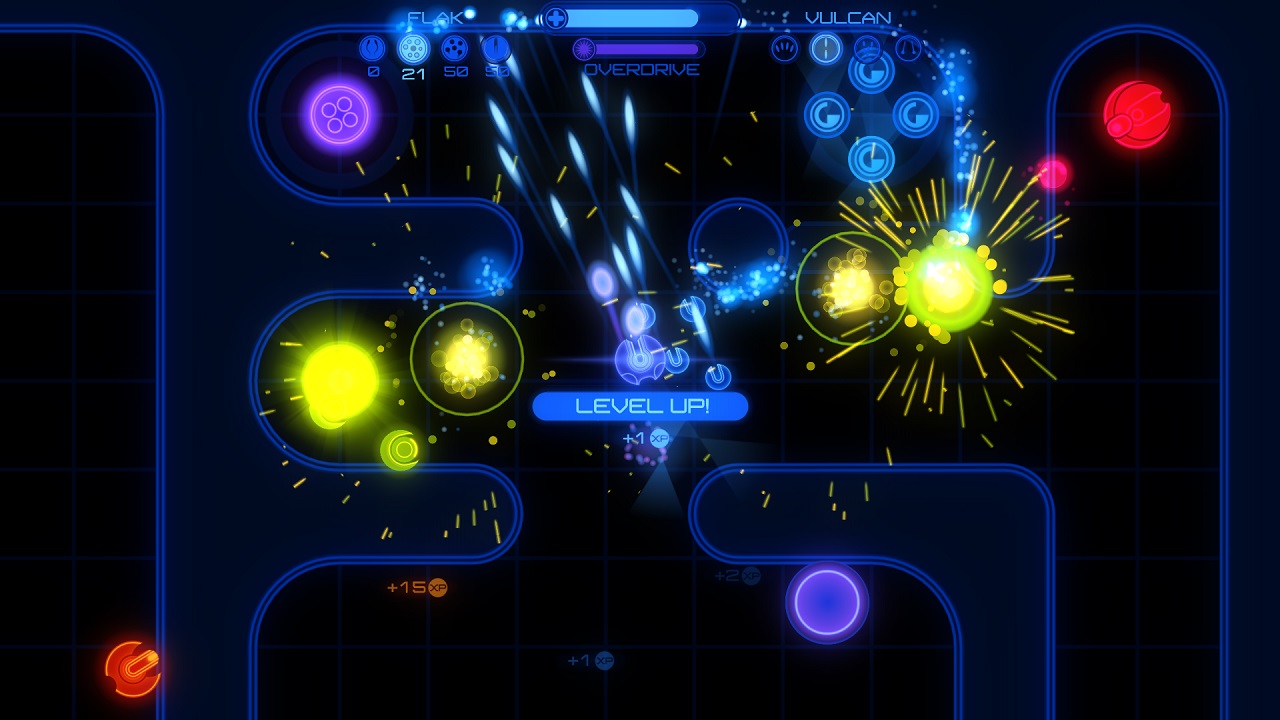 Beneath the thumping bass and driving electronic soundtrack, Inferno 2 offers very little in terms of explanation or instruction, but the game naturally directs players to what they should be doing next and how to play. Sparsely scattered info panels give me just enough information about how to swap between weapons or activate certain powerups, but also decided to tell me about destructible walls AFTER I had to leave a free power up and weapon shop behind in a previous level. The configuration of the twinsticks will lead players to gravitate towards the shoulder buttons, where the missiles, Overdrive and swapping between weapons lives, meaning that the transition from mobile to console was, at least in controller terms, a massive success. Inferno 2 is very comfortable with the Joycon setup, and, after about stage 6, you’ve figured out all the buttons you really need to in order to move, shoot and mostly enjoy yourself.

Calling it RPG elements is really a massive misnomer for the upgrade elements that exist within Inferno 2. As you level up (you get XP for enemy and even landscape destruction), you’ll be able to amplify the weapons, missiles and ship components that you have, plus you’ll find cash that allows you to buy some variances of upgrades within the shops that crop up. However, it’s mostly a skill tree situation that scales as you increase: it’s one level point for the first upgrade for the spread shot, but then three for the next, and five for the final. The only “role” you really take is “dude who is piloting the ship,” and you don’t even get a storyline or anything to go along with that. Don’t get me wrong, I enjoyed the upgrade system, and I love the achievement system that tells you when you do something cool (where’s my system wide achievements, Nintendo?), but saying it has RPG elements will attract people with the wrong expectations and deliver them disappointment. 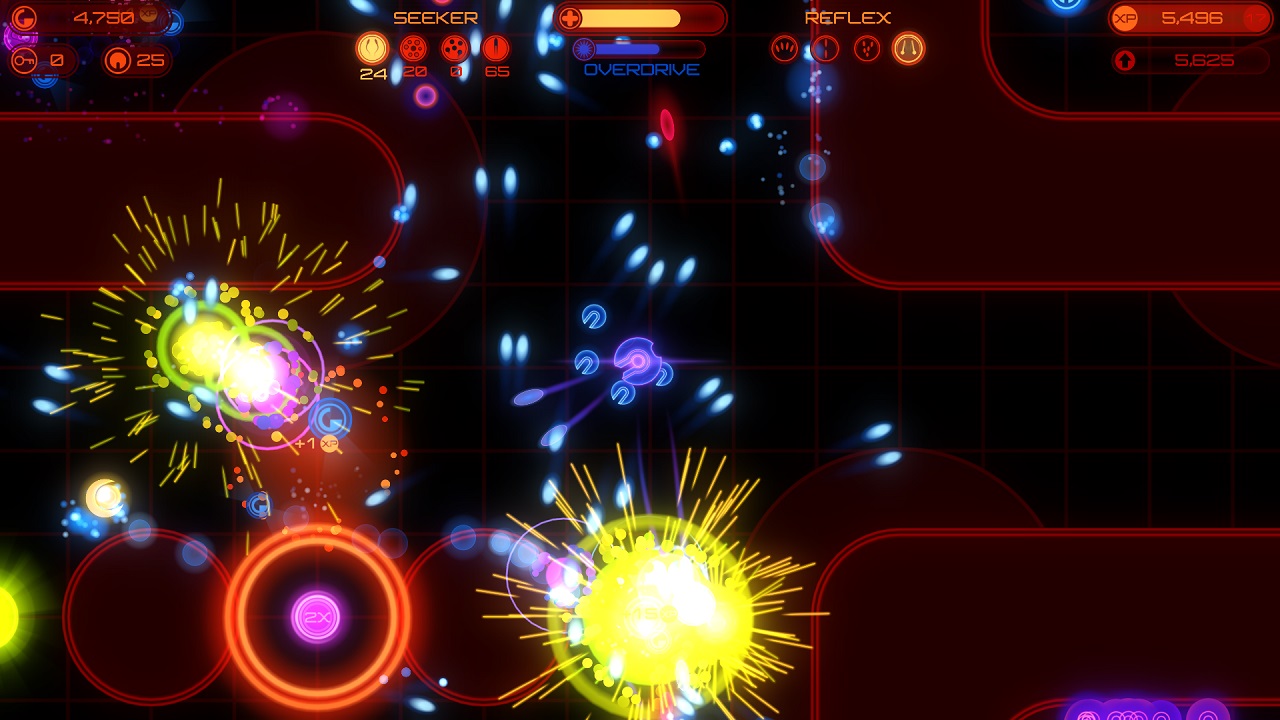 When you really get sucked into Inferno 2, you realize that it does balance the best of both worlds in the idea of a mobile game turned big time. It’s easy to pick up, play through a stage or two, and then put it down. There is a continue system, so you can change between titles instead of being tethered to Inferno 2 until the bitter end, and the Volcanic difficulty level really lives up to its name. I recommend for most players to at least get through stage 10 before deciding if they want to try and up the difficulty or not. The first few stages can feel boring and too simple, but that’s more of a Dante’s Peak scenario where they’re warming up the water before they boil you alive. By the time I got to stage 14, I was using up all my missiles, spinning on my axis like a destruction dervish, and trying my best not to let all the drones that I had banked in previous levels (little assist ships that you deploy two at a time, but die after one hit) go belly up. You don’t realize how much you rely on the health powerups until you watch your health get DANGEROUSLY low and start to panic, and now there’s just SO MANY little green ships on the screen. And this was only at level 14: there are 80 stages to get through. Then there’s New Game + mode, which allows you to carry over all your bells and whistles from the very beginning, and who doesn’t love to stomp?

At a pocket change price with hours of enjoyment, Inferno 2 might not be for everyone, but it also has enough appeal and intrigue to at least raise a few eyebrows. Without a second player available (back to school season), I couldn’t test out the co-op function, but I’m sure longtime fans who are considering double dipping would love to blast along with a buddy down the turbulent valleys that make this game so incredibly appealing. Don’t dismiss it just yet: you might want to come see what’s cooking.

Exciting, engaging, addicting, Inferno 2 showcases what happens when a solid mobile title makes a great leap to the console without overreaching.