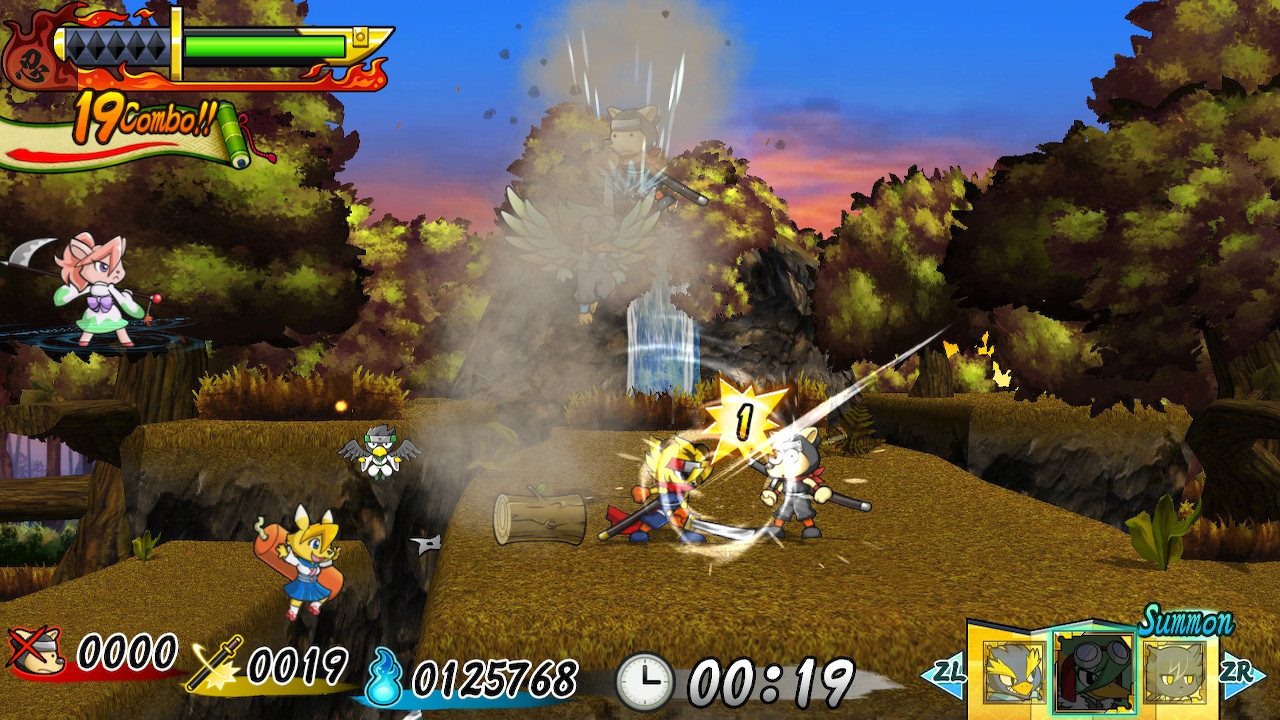 A good action and arcade-style brawler has only a few requirements in order to make it sing and make people want to play it. First, it should be simple on the surface, but have the ability to get more complex the further into the thick you get. Second, it should have an appealing set of enemies to wail upon, or at least an appealing hero with whom to wail. Or, thirdly, it should at least be goofy enough that you throw out a lot of analytics about the how and the why and just accept what’s happening. Yes, he’s the mayor of the city, and he’s dealing with his daughter being kidnapped by punching and suplexing every thug in town, but at least he looks hilarious and awesome doing so. TOMCREATES, a studio that I haven’t had the pleasure of knowing before, decided to throw in a nice mixture of all these points and add a secondary layer of surprisingly replayable elements when they made Shinobu Spirits S: Legend of Heroes. In fact, this could turn into one of the best values for your buck as long as it’s your style of game.

First and foremost, you should know that Shinobi Spirits S is one of those games that pulls heavily from the bloody history of Japan with a few creative (and sometimes eyebrow raising) alterations to make the whole thing come together. So, while the name of our hero, Saizo Kirigakure, comes from an actual badass ninja in Japanese lore, he was a.) alive in the Sengoku period (as opposed to Edo, where things take place in our game) and b.) was not a tiger-humanoid thing. Like, I really, really appreciate that TOMCREATES took the time to purloin names, locations and ranks from the annals of history and legend, but we should be clear that turning everyone into animals kind of negates a bit of the realism, so just take that with a grain of salt. Anyways, you’re Saizo, you’re coming home from a mission, and you find that your squad, the Beast Brigade, is gone, as is your commanding general, real person name Sanda Yukimura. It quickly becomes apparent that foul play is at hand, but here’s the thing: you were the head of the Beast Brigade, and they sent you out on a solo mission because of how awesome you are. Saizo isn’t worried about getting the band back together, and neither should you, as you jump, slash, slide, fly and summon helpers to beat unbelievable ninja booty in a quest to get things back together and save the blossoming Edo Empire. 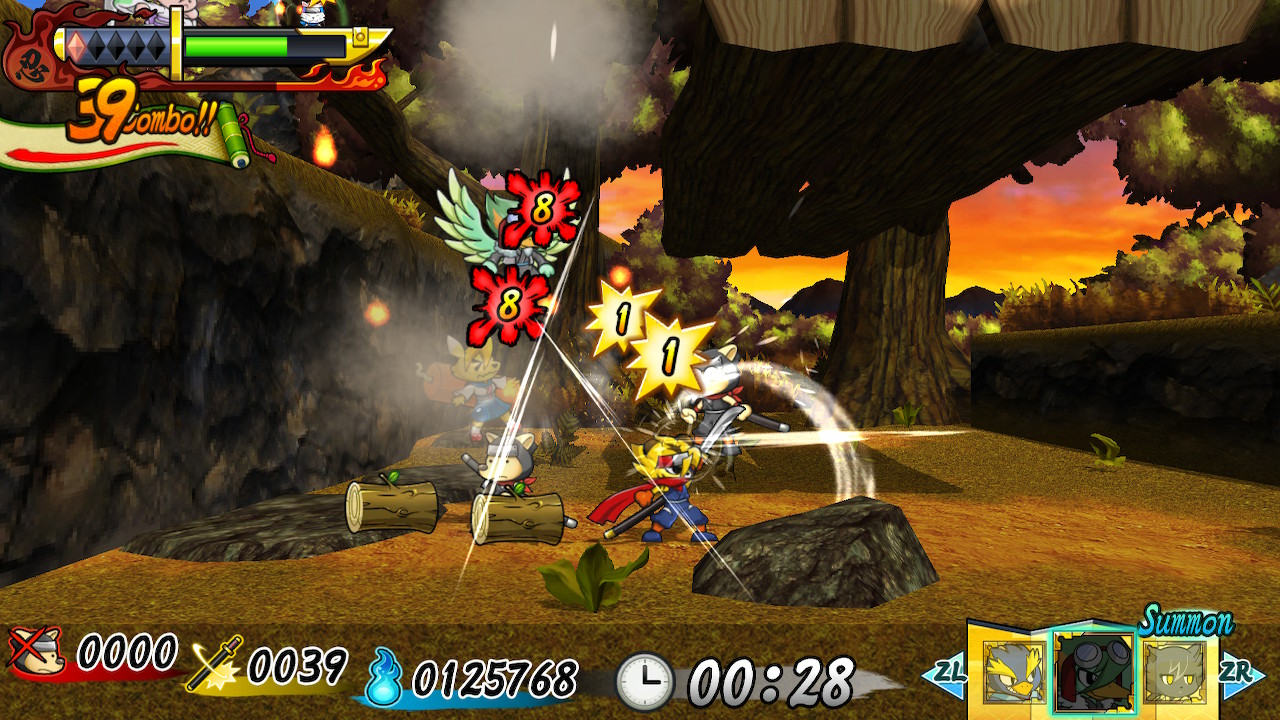 As mentioned up top, Shinobi Spirits S is a sidescrolling arcade beat-em-up with a ninja influenced twist. A single player adventure, Saizo is able, after a period of time, to summon the members of the Beast Brigade that he saves to aid him in battle in different ways. Problem: you don’t summon them as full on NPC fighters, but rather as some one-and-done effect attacks, such as the explosive-handling Mochi, who pops in, throws mad fire to destroy enemies surrounding you, and then vanishes. You have a limited number of summons per level (which can increase with time), so most of the fighting you have to do by yourself. The game drops you in without any real warning, so you need to use trial and error to figure out the different kind of slash attacks you can do, the fact that you can double jump right off the bat, and that you can do this sort of slide tackle/evasion move which I didn’t know until I accessed the skill tree, which you also can’t do until you finish the first level.

The abruptness of the start of Shinobi Spirits S might feel a bit offputting to some players, but I rather enjoyed how we just quickly got into the what and the how after a brief cutscene to explain the why. Anyone who’s played this style of fighting game before will understand how to attack, dodge and get your sword wet with blood (blood not featured) and will, intrinsically, know to pick up the various items hidden in the stage (scrolls to unlock skills, letters to unlock game lore) and the spirit orbs that enemies drop. While some might complain that you only get the tutorial when a new hero is introduced, the fact that TOMCREATES trusts the player to figure out some of the most fundamental gaming ideas without needing to have their hands held is refreshing. I was slashing away at ninja dogs, shuriken cats, whirlwind summoning crows and battleaxe wielding oxen without a second thought, and it all seemed natural and easy for me. Too easy, as I found out, and the game then added the delicious second layer that helps set it apart.

When you finish the first stage of Shinobi Spirits S, you’re able to see the adjustable difficulty (with optional quests) and the skill tree. The skill tree is where you dump all the blue orbs you get from enemies to upgrade skills you’ve acquired along the way, such as adding a new slash to your combo, or powering up your found Beast Brigade members to have better activity in the battlefield. You can even add extra summon points, allowing for your fellow anthropomorphic assassins to join you an extra time. The shifting difficulty, additionally, is a surefire way to get some extra spirit points right out the gate and hypercharge Saizo to be stronger than necessary for the second level. Accomplishing things like “complete level without a continue” or “do a 50 hit combo” are easy in comparison to some others, and the spirit bonus is a quick upgrade to make you really come into your power fast. A warning, though: new skills often require diligence in collecting the scrolls within levels, so don’t think you’ll get by on questing alone. 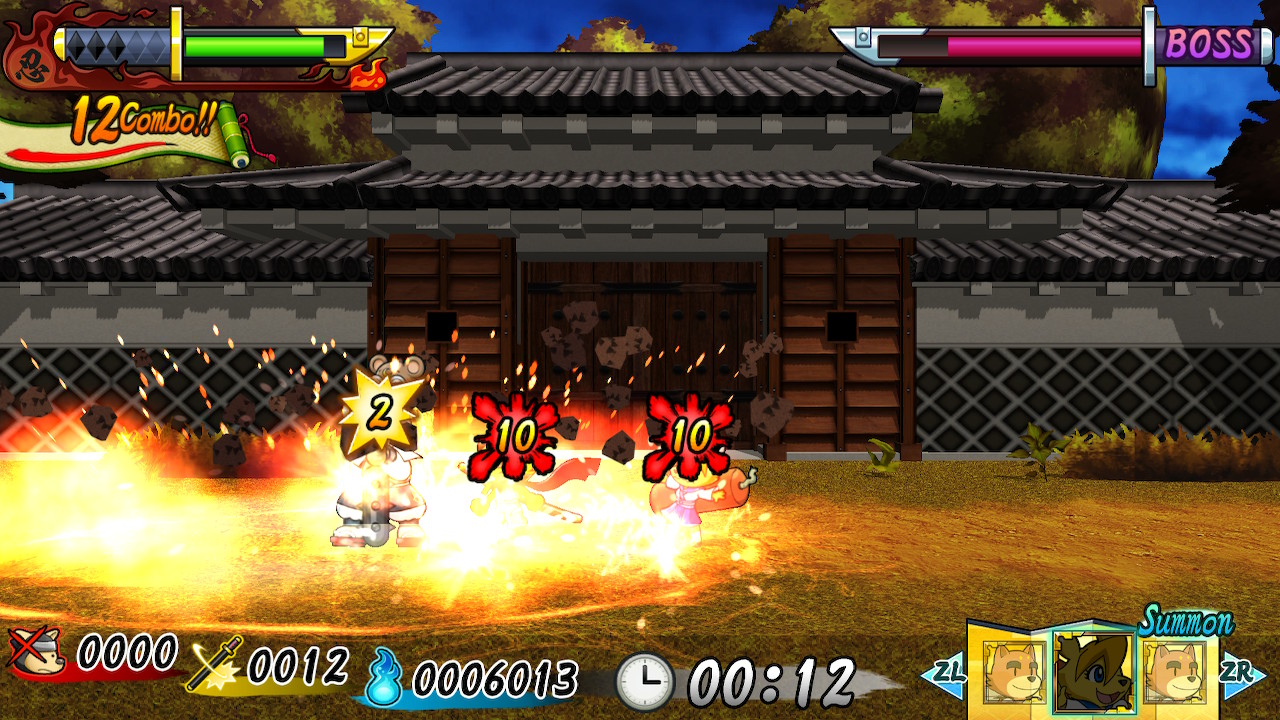 The aesthetic of Shinobi Spirits S is right on the money, mixing a bit of cute cartoonish design for the enemies and heroes with a sort of wistful natural element that mimicked what Feudal Japan could have looked like. Most of the stages involve multi-level jumping that asks the player to leap blindly, trusting that you can either guesstimate where to land or at least recover quickly when you miss. The use of enemies constantly being in the background is sometimes annoying, because their range attacks seem to be totally unreliable in gauging where they can be, but pulling a successful combo on an enemy in the foreground can launch their shattered body into the background, getting you a two-for-one deal (but annoyingly spawning spirits where you simply cannot get them). The bosses, both mini and mega, require you to have at least a couple of heroes on hand for either healing or additional damage, because they really are tanks on paws (or hooves) and will just beat the hell out of you without seeming to mind you doing any sort of actual damage or attempt. Granted, you’lol preservers one way or another, but, due to the high number of “take no damage” bonus missions, your need for spirit bonuses may temper your threshold for pain.

To be honest, the only umbrage I take with Shinobi Spirits S is the audio quality, and it’s not the ambient music or the sound effects from the enemies and the weapons. For some reason, when Saizo finds an item or levels up the skill tree, he yells out in Japanese something that’s probably cool and appropriate for the moment that I cannot hear in the slightest. Seriously, maybe it’s because I’m going deaf or maybe I just don’t speak Japanese as well as the average guy living in the US, but it almost sounds guttural and definitely gets shouted down by literally any other sound playing at the time. Be it the thwack of the shuriken or just the gentle background music, Saizo’s proclamations are lost to anything else that happens to be happening at the time. It’s minor, granted, but it happens enough for me to be annoyed.

Minor sound issues aside, Shinobi Spirits S: Legend of Heroes has a lot going for it. The levels are detailed, diverse and full of replay value. The difficulty levels scale appropriately, making enemies harder and the combat more personal, and you can balance it well with the skill tree selections to either unlock additional combat moves or just fine-tune what you already have. The heroes themselves are fun to unlock and rescue, replacing shadows on the title screen with more and more friendly faces as you make progress. The price, especially, gives a much better deal than I feel I deserve, so, if you’ve got a few bucks and want to enjoy several hours of mindless combat with a decent undercurrent of a story, you’d be hard pressed to find a better value.

A surprisingly adorable and engaging take on the massive bloodshed that ushered in the Edo era.