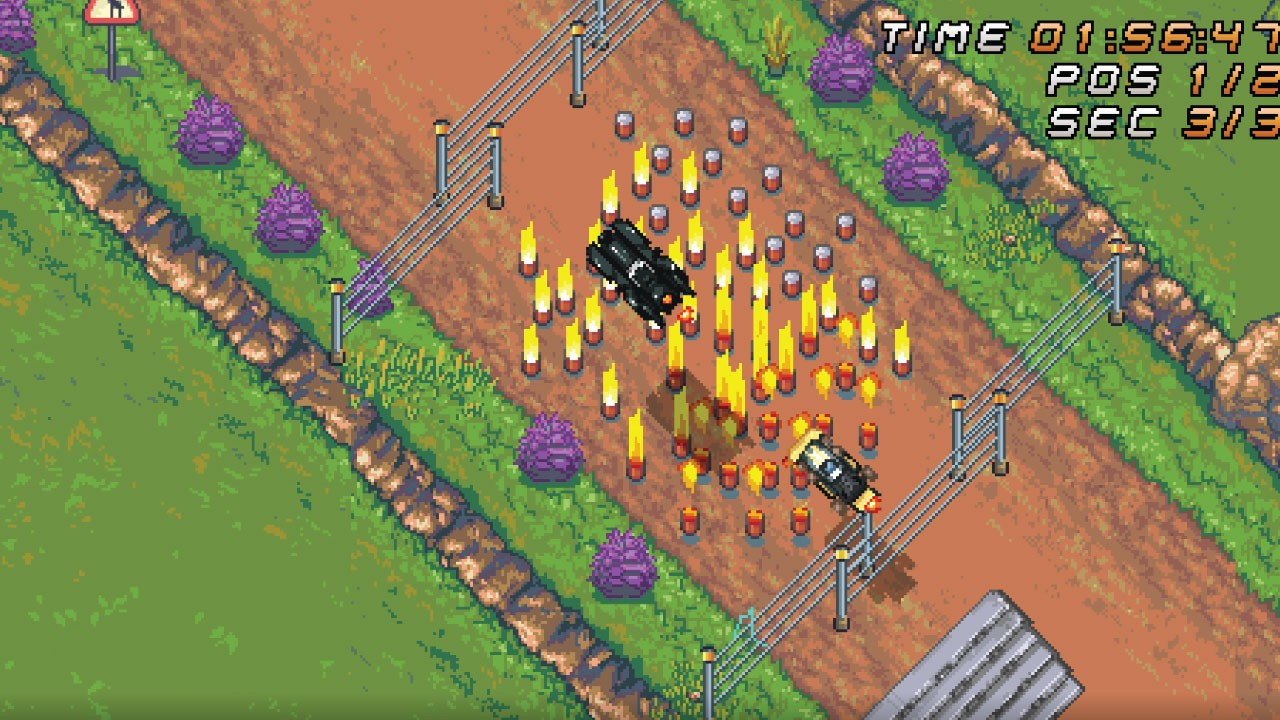 Almost like a throwback to classic top down racers like Supercars, Spyhunter or the original Grand Theft Auto, Super Arcade Racing is a retro perspective on racing. It plays out very much like the original games it emulates with chirpy tunes, pixelated graphics and a corny storyline that’s straight-to-video. You play as Mick, who has unfortunately become the victim of a glueing incident as he permanently wears a helmet. At the start of the game, his brother, Martin, is kidnapped by unknown assailants and flee pretty quickly. Hot in pursuit of the criminals, they manage to get away, Mick totals his car, but finds a flyer for an underground racing circuit. His only clue to the whereabouts, he enters the tournament to discover…the truth!

If you played these sort of games back in the day as I did, you’d immediately feel some nostalgia. You could argue that this was like playing an emulated game on the Switch as it hits the spot when it comes to paying homage to the spirit of 16-bit racers. Alas, it also has the same sort of handling at the same games it gives the nod to as they often slide all over the place, and as you only have the viewpoint from above.

You can’t always see the track ahead of you and frequently hit objects that hinder your progress – an event that triggers the story in the first place as you crash into some logs. However, these traps work in your favour too, as if you’re leading the pack, you can drive past these which will automatically fire off in your opponents’ path.

But what about the sliding? That’s not necessarily poor handling on Super Arcade Racing’s part, merely the stats of your car. Each race will award you with coins that you can spend on upgrades, but you have to unlock the parts in the first place through progression. Sadly, you have to go through a very linear line-up of tracks and win before you can get the goodies. The upgrades include engine, gears, tyres, exhaust and aerodynamics. They’re all self-explanatory, the latter allowing you to draft behind other vehicles then overtake. Unlocking them is the first step, the second is having the money to pay for it. 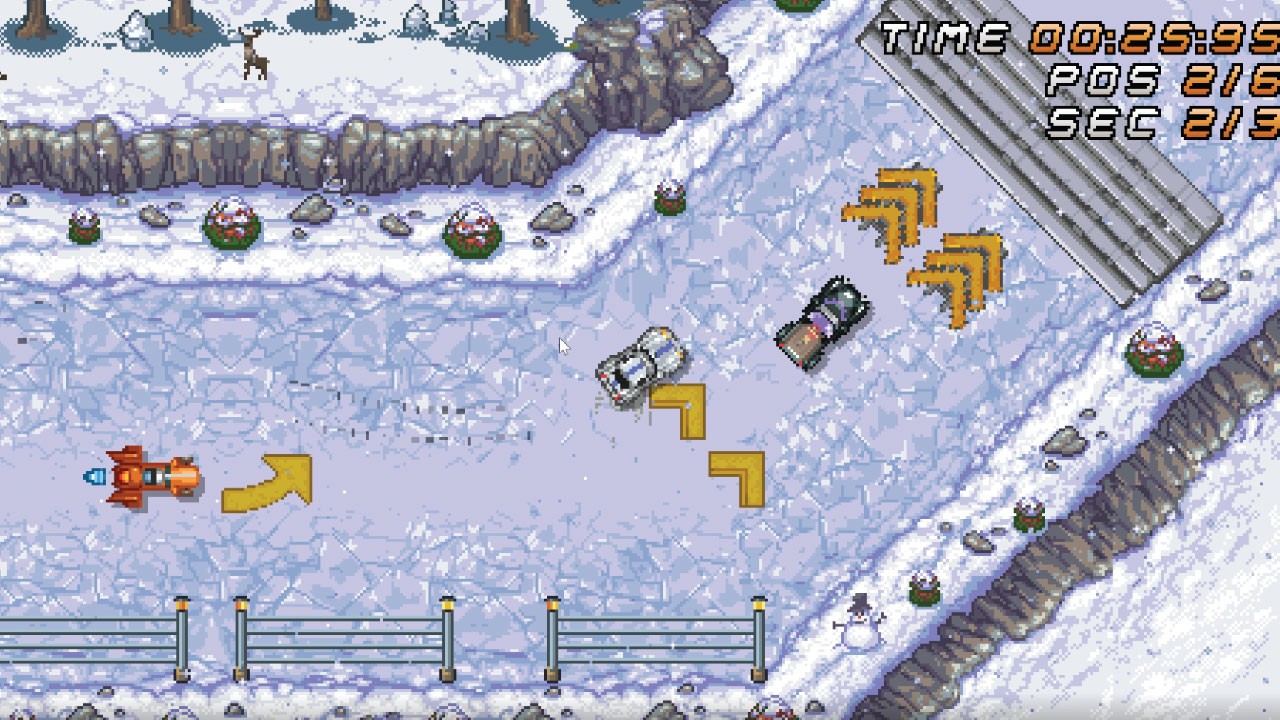 Additionally, you can customise your vehicle. There are a good amount of styles to unlock (which are cosmetic only), and an abundance of colours, but interestingly, the colours are mostly locked and a cheap reward for a win. It’s not much of an incentive, but you do unlock body parts so can chop and change the appearance of the car.

I found a smaller car would get knocked about a little, but easier to manoeuvre about and bounce off the bigger cars if not as fast as them. Yes, I’m not afraid to admit that I used the technique to secure a few wins when under powered. Other than these upgrades, you also earn in-game achievements. A nice touch if you’re a completionist, but as the game is so linear in approach – one track after the next, it’s highly likely you’ll unlock them all by merely showing up.

There are 60 levels, and aside from the races, you’ll encounter boss levels, which seem to be evenly matched each time. You can’t overpower the car and grind to unlock the best parts as you have to beat each boss first. There are pros and cons for this, of course. The pros are you get through on skill and equal footing, the cons: if you’re stuck, tough. There’s no way to upgrade further until you get past this milestone.

There are cheap tricks you can play, however, and clipping an opponent into the wall will slow them down (but they catch up almost instantly – you can’t get a good lead on anyone). For the bosses, I found myself knocking some into the water would give me just enough time to get ahead, and then the challenge was staying ahead. 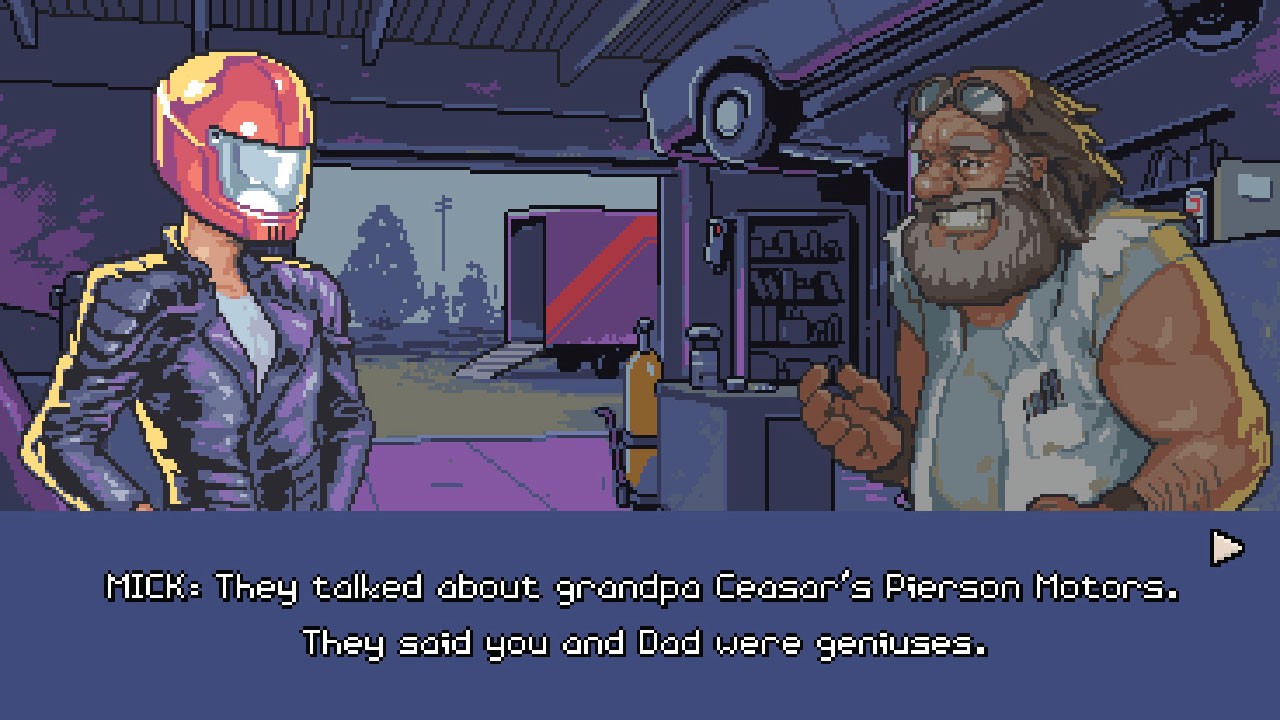 The simplicity of this arcade approach makes the Super Arcade Racing easy to pick up, and it’s not the type of game that takes an age to master as aside from dodging obstacles and skidding on ice, the premise is mostly the same throughout. But the game isn’t presented with a selection of locations and tracks, they’re just numbered 1-60, and you steadily go through one at a time through the minimally presented menu.

You can go back to past tracks, of course. Between races, you’ll get teases of the story, which is a bit of a family affair without elaborating too much. Mitch is helped by his uncle in the game, and these story sections play out like a visual novel, only without the interaction.

Super Arcade Racing is a no-frills top-down racer with plenty of upgrades, but the nature of the way things are unlocked, it will take a bit of time to get through. The added replayability may come from getting all three stars each level (excluding the boss battles). Customisations are purely superficial, but the upgraded parts are a must if you’re to get anywhere. Interestingly, though, replaying earlier stages, you aren’t overpowered despite them being much earlier levels. I attempted to blitz a stage, lapping everyone, but they kept up the whole time.

One for those who miss the classic top-down racers, Super Arcade Racing is a good throwback to these titles, but has the same characteristics of the games it emulates in that there’s not much flexibility and you progress one stage at a time.