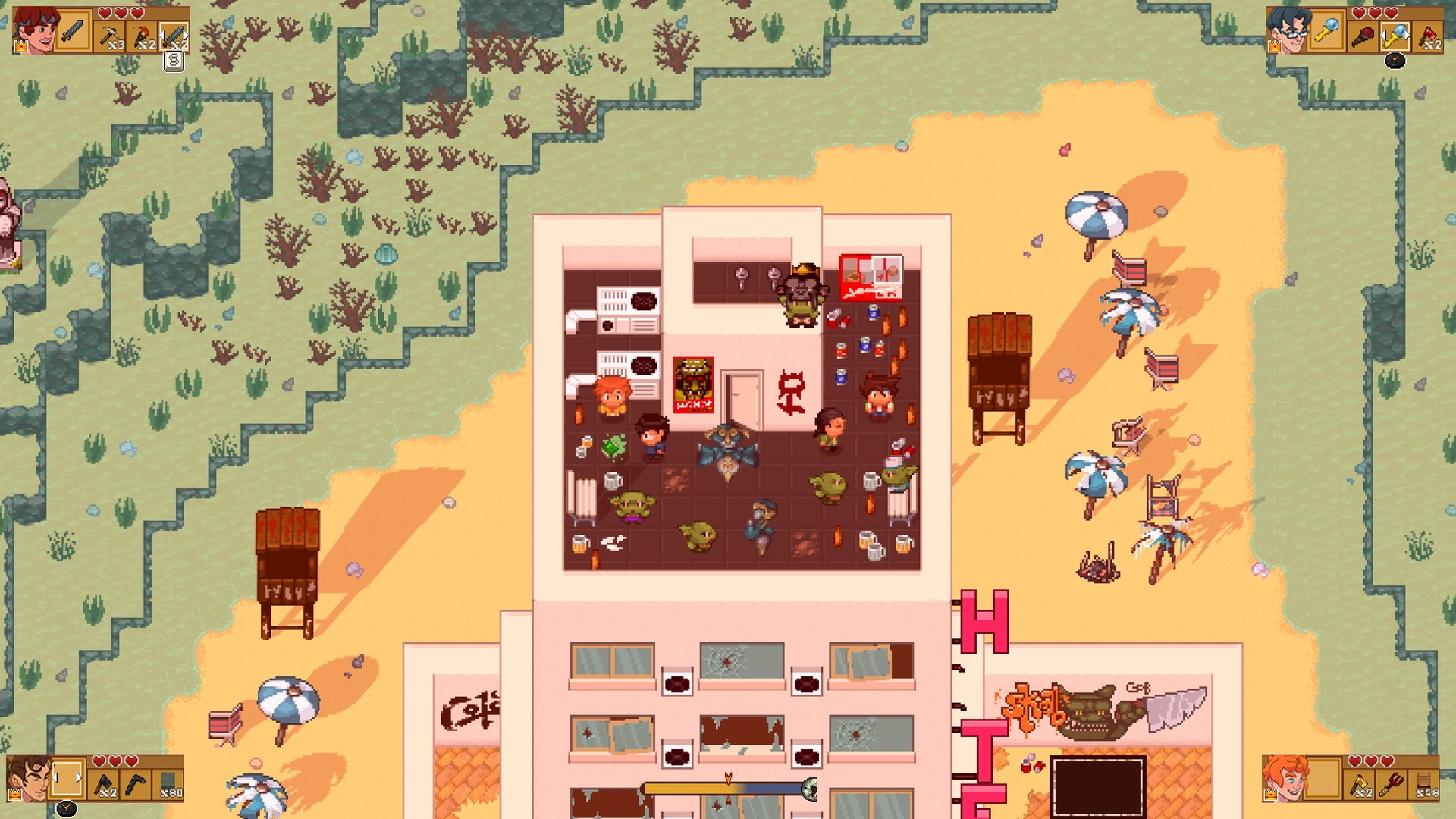 The Doom & Destiny series of games has been one of my favourites from the first one released. The whacky comedy combined with the well applied classic RPG mechanics makes them absolutely charming. With the third release in the series, Heartbit Interactive has tried their hand at a new genre: open world survival exploration.

Similar to the previous games, Doom & Destiny Worlds’ story starts with a group of four nerds being transported to a fantasy dimension. Johnny, Nigel, Mike and Francis are the lucky (or unlucky) recurring main characters in each of the games, each fitting a different archetype.

In this new dimension, the player will control one member of the quartet who has appeared naked on an island. By exploring a bit, all the other members of the party will be found, with one of them unluckily stuck in a tower. Once he has been saved, the team explores said tower, encountering Destiny.

Destiny is a powerful wizard who has summoned all of them to this world as heroes in order to defeat the three tyrants. These used to be adventurers, but became corrupted after defeating the evil wizard Dark Eidous and took over the world. From here on, the four dorks will set out to explore the world and defeat the tyrants in order to return home.

In comparison with the previous entries of the series, Worlds have a lot fewer dialogues. This is an absolute shame, since they were the highlight of the previous entries. While gameplay is generally quite standard, the quirky conversations, quips, references and jokes made the game stand out; the lack of these is definitely a loss for the game. 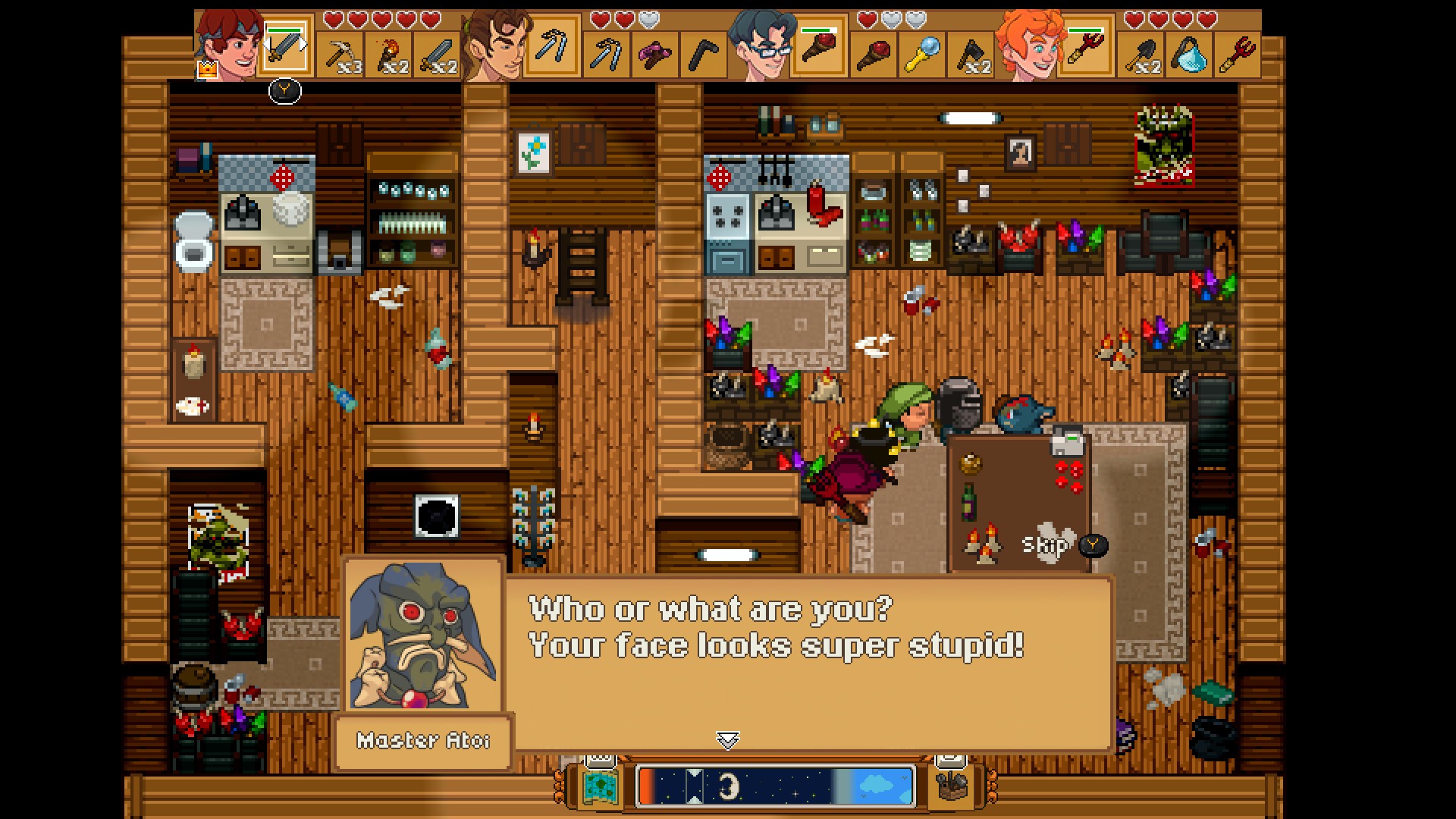 The game’s graphics are simple but effective, made in a low detail pixel art style. The designs of the enemies are distinct and unique, varying from area to area of the game. The islands themselves are not that different from each other, though they certainly have some particular features based on their global position.

Sound is well made with a varied soundtrack consisting of several high quality songs. The SFX is also quite good and very welcome during nighttime. As it was to be expected, there is no voice acting in the game, although this definitely isn’t an issue.

As previously stated, Doom & Destiny Worlds is an open world survival game. The main goal is to defeat the three tyrants, although it quickly becomes secondary to exploring, crafting and fighting enemies. The progression of the game is only soft capped by the enemy levels, meaning players can freely explore as long as they don’t start fights.

Levelling is only used as a method to prevent players from equipping certain items. These will require certain stats such as an X level in Strength or Dexterity, which can be raised by defeating enemies. That said, grinding is not particularly dynamic in Doom&Destiny Worlds, seeing as items have durability and wasting good ones on weak enemies doesn’t sit well. Luckily, this only influences battles, since all tools regardless of their components are the same, only with different stats.

A not so fun change made to Worlds, is the escape system. Whereas in the previous games the escape chance was a fixed number, in this one it decreases every time it’s used. To recover it, players must rest at bonfires, where they can also heal up. 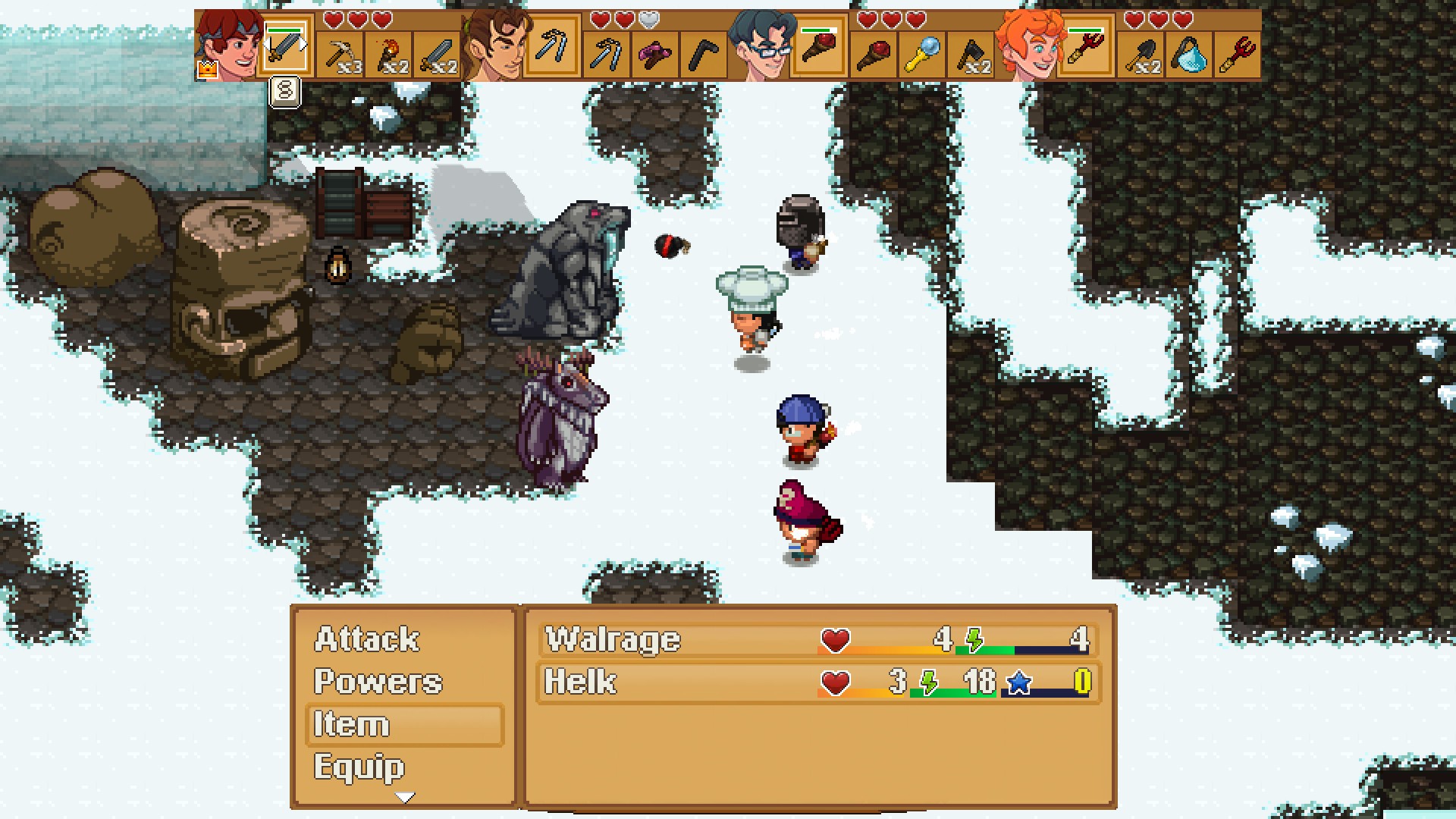 The game also includes local co-op compatible with Steam Play Together, allowing up to 4 players on the same screen. Depending on the amount of players, the party will be divided in different ways, up to 1 character per player. While everyone must remain within a certain range from each other, the system works, reducing menus to take only part of the screen.

For battles, co-op works similarly to enemy reinforcements, where players can move towards the combat in order to join it. They can also choose to ignore it, although no experience will be obtained by whichever character that the player is controlling.

Overall, Doom & Destiny Worlds is a good game made by a passionate team. Some things such as levelling up and durability could use some tweaking and polishing, but the base definitely is there. The asking price is higher than both of the previous games with DLC planned for the future, making the base game come for $19,99/£15.49/19,99€ and $33,98/£26,48/31,98€ with the season pass.

While I personally find Doom & Destiny Worlds a fun game. The previous two games, in particular the first, hold a special place in my heart. I wouldn’t say I don’t recommend Worlds, but if someone wanted to try out the Doom & Destiny series I’d definitely first point them to the previous two and explain this game is completely different. Does it hold the quirky charm of the previous two? It does, but without dialogues it’s not the same.

The latest entry in the Doom & Destiny series, which changes the usual standard RPG genre to open world survival.