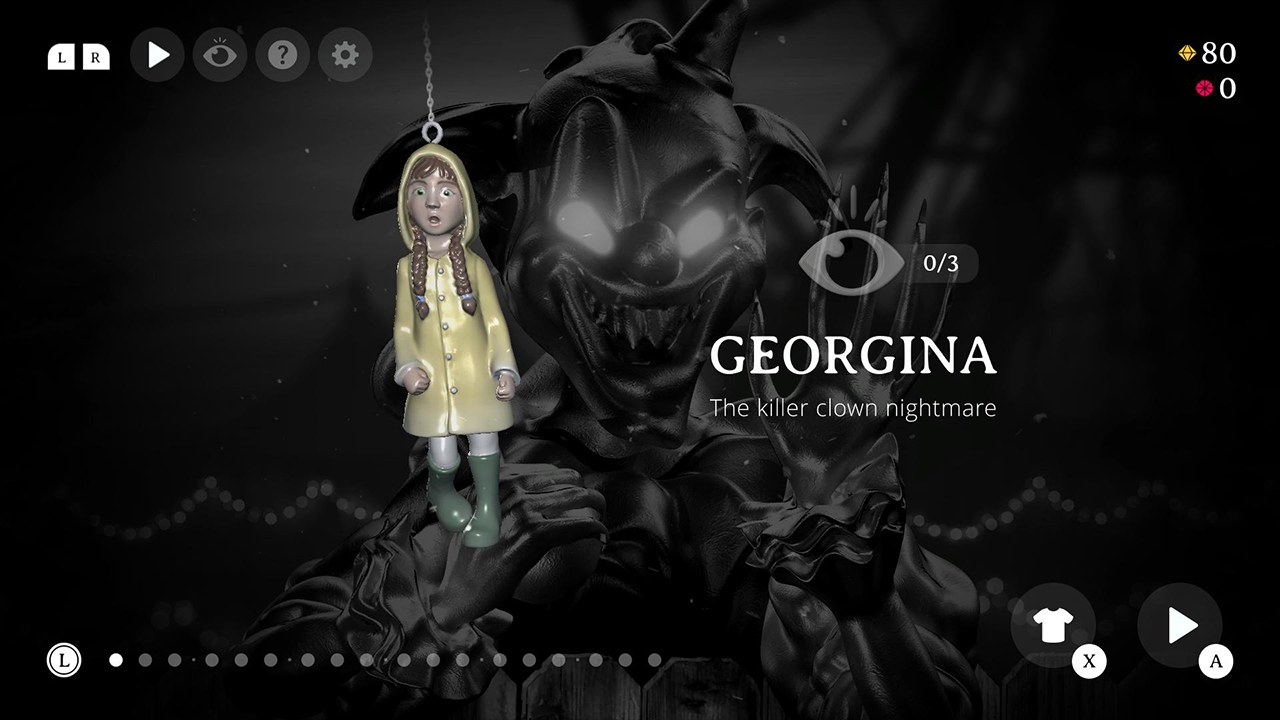 With Halloween coming down the pipeline in a little over a month, it’s important for game devs to get their creepy, spooky and terrifying titles out immediately in order to try and make the first impressions. After all, there’s going to be a ton of games to choose from already, and new, indie games will need to strike before the iron even gets a chance to fully heat up, hopefully making impressions so that people can recommend stuff when the sacred day is upon us. One of the first I’ve seen to surface is a little game called Rest In Pieces, which comes to us from Itatake. This was, originally, a mobile game, so take that information along with the rest of the review as to whether you’ll want to invest your time and your eight dollars into this weirdly hypnotic but deeply repetitive experience.

Rest In Pieces is an interesting arcade/reaction game with a distinctly dark and disturbing tone.You take on the role of several people and figures that are having vivid nightmares. In the nightmares, you’ve become a porcelain doll, and are being dragged through a dark, jagged valley by a massive figure that symbolizes the key to your fears. Early on, it’s a twisted clown, but you also end up seeing things like a massive kraken, a bloodthirsty yeti, and more hulking entities to control the dream. The “bosses” are creating landscapes that are filled with rocks, denizens and other obstacles that are sure to shatter you: after all, porcelain is known for fragility, and even lightly touching one will result in your destruction. Your only defense is the chain you’re tethered to, and trying to swing it left or right in order to avoid getting decimated. If you can go long enough, you’ll find three eye icons, each one symbolizing the end of one leg of the journey and, upon collecting three, you’ll awaken, ending the nightmare. 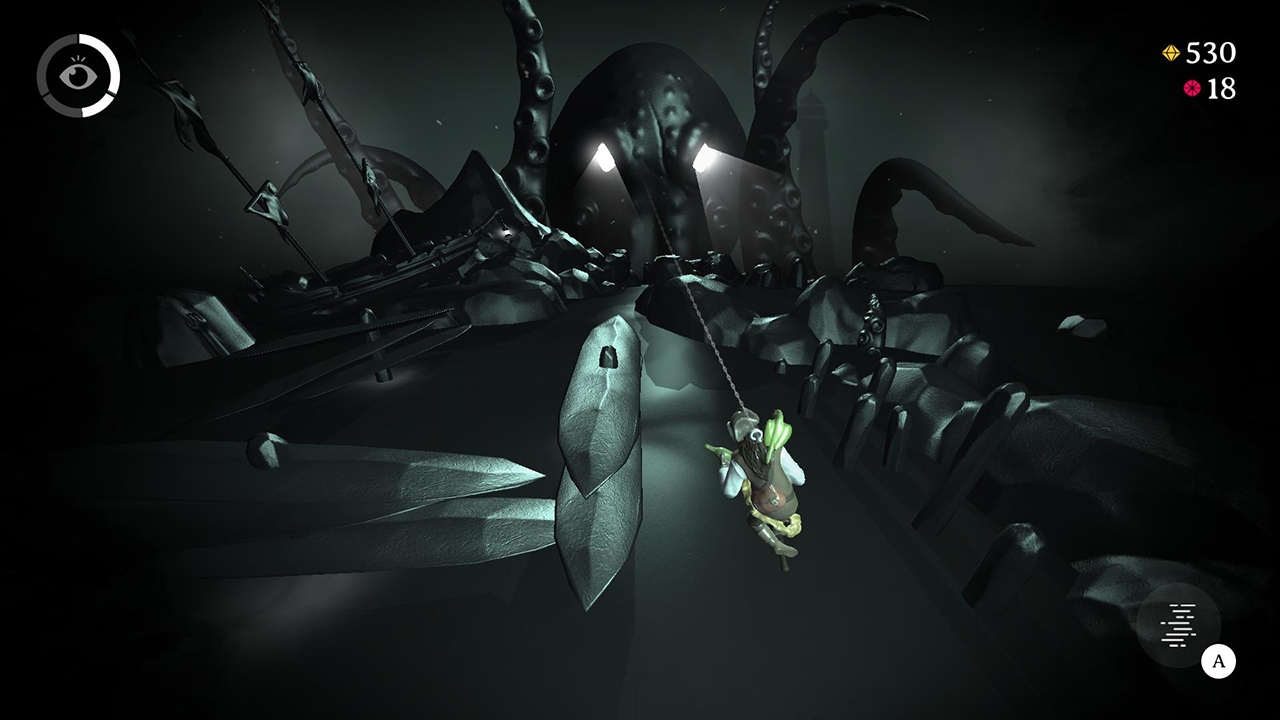 Firstly, I do absolutely adore the presentation of Rest In Pieces. It’s got a higher quality aesthetic than I could have imagined for games years ago, and it really conveys well in the nightmare premise on this screen. Everything is awash in darkness and shadow, with the only color being your frail doll effigy and the occasional gemstones that are strewn about the landscape (gems have a dual purpose that we’ll cover in a moment). The dolls themselves, of which there are about eighteen all have different, cute-yet-horrified visages, perfectly capturing the notion of someone/something having been transmogrified into a chachki. The massive boss sits at one end of the landscape, calling down additional obstacles to try and destroy you, and is lit up in full when the eye icons are found and you’re able to attack them with a “waking” moment. While I don’t think things like the Medusa necessarily fit into the nightmare motif, it’s still a good looking boss, and serves the purpose (whereas the Insectum legit gave me heebie jeebies). In a lot of ways, it brought me back to the mindset of Thumper, where you’re just trying to survive along this pathway in order to reach salvation, and that’s gotta count for something. Granted, the music is much, much simpler (just sort of ominous ambience with occasional sound effects peppered in to show arriving chaos), but the feeling has a bit of similarity.

The controls aren’t my favorite, but they work for Rest In Pieces. You have your choice of either using the shoulder buttons or the joystick, and you can literally just move back and forth. From what I can tell, every figure has different physics to it, which makes it more interesting: Tiny the elephant has more mass and thus a bit of a bigger, slower swing, whereas the surfer, Alana, can move more quickly but is inhibited by her longboard (which can easily touch the rocky eruptions the kraken creates). Since each level seems to be procedurally generated (or at least mixed enough to keep you from straight memorization), it does take a bit of skill to figure out what works best for you, and how to best weave through the obstacle course and get corrections. After a while, I started to enjoy myself more, especially when I realized I didn’t HAVE to continue after shattering, and could just take the L and restart from the beginning. Running a whole nightmare only takes about three minutes per figure, so, if you get broken during the second wave, why not save your gems and just restart? After all, if you’re spending your gems on resurrecting, you’ll be stuck playing the clown level with Georgina (the starting piece) forever. 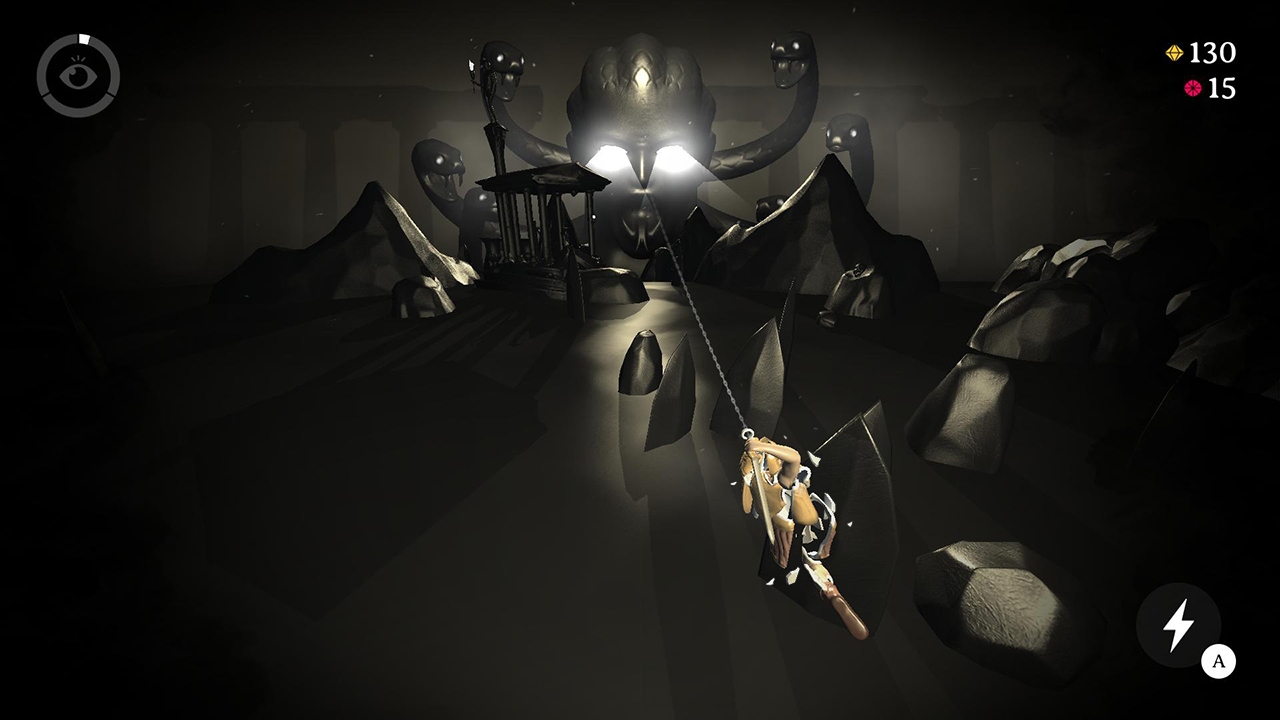 Now, this is where the mobile rub comes in, and it doesn’t sit great with me. I appreciate devs removing the “pay to win” elements from their ports to the Switch, but they need to also balance things out by amping up one element or another. In order to move on in Rest In Pieces, you need to get a certain number of eye icons to unlock the next nightmare. Seems simple and fair enough: each character gives you three eyes, and, for example, you need five to get to the second nightmare (kraken). But you need 100 gems to unlock the second figurine, Leotard, so you need to either do one VERY successful, skilful run with Georgina, or you need to just keep going in, getting gems, shattering and restarting till you can afford another porcelain sacrifice. Then, upon getting five eyes, you realize that no characters are automatically unlocked for the next nightmare: you gotta grind additional gems to even play that nightmare, as the dolls are locked to their specific levels. Considering my best was about 60 gems in one run, you end up needing to decide if you want to focus on unlocking all the dolls first, or unlocking all the nightmares first, because either way takes time. Oh, and don’t get excited if you get a red gem: these rare stones only unlock different costumes for the dolls and can’t be exchanged for the normal gems.

If you could just play Rest In Pieces straight through with some occasional stops for more stones, I’d have a lot more fun overall. The look and concept is cool, and it does have a great “pick up and play” feel for the Switch, plus it’s got a very intuitive nature combined with some skill scaling based on raw physics and the level shuffle. However, I abhor the grind, and there’s no reason for me to keep playing it unless I am fully invested to see all the nightmares and characters. It gets boring needing to grind in any game, and one where the appearance of the gems isn’t guaranteed on any level can feel hopeless and boring. Maybe wait to see if anything else tops your list before you get tricked by this treat.

This creepy mobile port is interesting at first, but the revelation of grinding to get beyond the first stage instantly turns it from a frightfest into a chore.