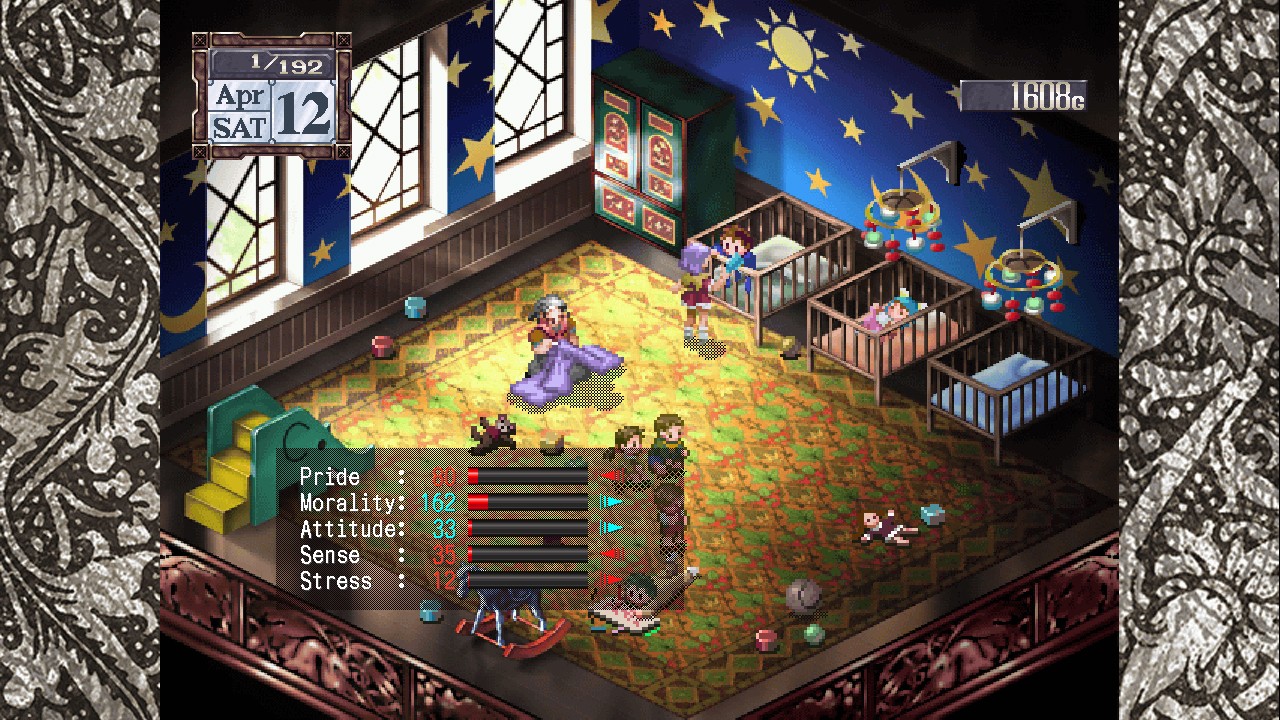 When it comes to simulation games, I often give a pass to a vast majority of theoretical jobs and creations I could be working on. I don’t like to invest time in building cities, working farms, driving vehicles or meticulously torturing Sims over a period of time. The Kairosoft games are good in small doses, but I turned a blind eye and purposely avoided many of them because they didn’t suit my tastes. I still don’t even know why I loved getting into Princess Maker, but it was something that really grabbed my attention. Maybe it was the purposely absurd notion (at the time) that I would break traditional roles and work on being a single father to a supernatural being and see them through adolescence and puberty. Maybe it was the idea that I could help a girl grow up to actually be a badass instead of just a princess, thus wilfully defying what the game had intended in the title. In any case, my memories of Princess Maker 2 are so fond that, when I found out CFK was releasing Princess Maker 3 (aka Faery Tales Come True) on the Switch, I simply had to give it a go. After several runs through, I found that my memories may have been a bit rosier than I realized, but that wasn’t due to the content, but more the presentation.

The Princess Maker series has always put you in the role of a man deemed worthy of accepting the responsibility to raise a young girl from the age of 10 all the way to 18. In every version of the game, the girl you take under your wing comes from some mystical origin, such as born from a falling star or coming from a Faery kingdom. In this case, you are tasked with raising a Faery who was reborn as a human, and you’re simply picking her up from age 10 like it’s no big thing, and the Faery Queen erases your memory to make sure this is alright. You have say over what your daughter does over those eight years, but, much like a real parent, there’s a strong chance that your daughter can and will decide her own path depending on what happens over this period of time. All you can do is help give her guidance and direction and, hopefully, the world she chooses to step into when she turns 18 is the right one for her. Attend a variety of classes, work part time jobs, find a vocation and calling that’s right for her to make her happy. Or you happy. Seriously, whatever your overall tone is, just do it and be satisfied. 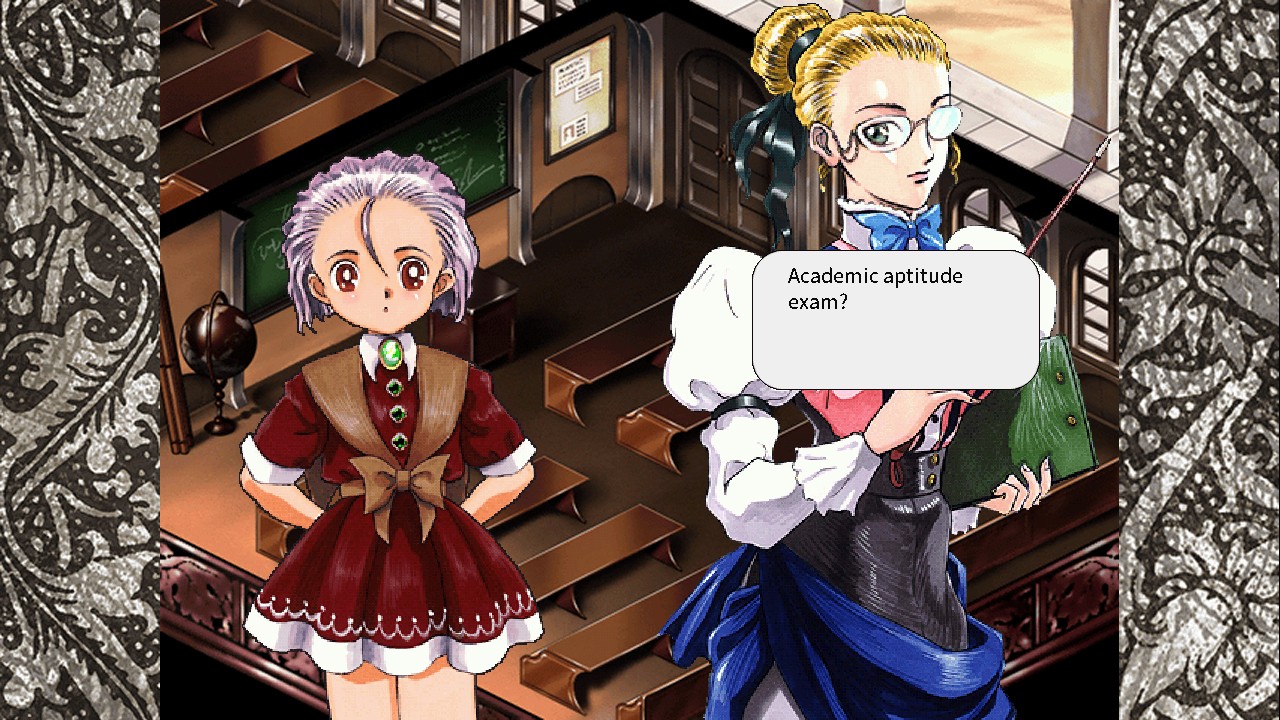 The game plays from the overview perspective in which you basically decide what your daughter will and will not do over a set period of time. If you’re fairly confident, or just want to get to an ending as quickly as possible, you can seriously decide all eight years of her life from the very first turn, set the thing loose, and then watch the magic (?) happen. I honestly do not recommend this because it is fantastically boring, and you don’t have a good chance to course correct if something goes wrong. For example, being forced to do jobs that your daughter doesn’t enjoy (most of mind hated maid work) can turn them quite rebellious and result in them being delinquent and skiving off their duties. If you keep sending them to do hard training work over and over, it’s a very real chance she’ll get sick and not be able to do anything for weeks on end. Instead, it’s usually better to pick a couple of classes or jobs at a time, see how that affects her different stats, and go from there. Over time, as you get more confident, you may decide to give your daughter longer streaks because you know her better, but remember: life is what happens when you make plans.

Princess Maker: Faery Tales Come True is full of surprises when you least expect it, which is what makes it such a satisfying simulation game. Your daughter will hear about different contests, such as the Health or Beauty contests, and may consider entering in order to prove to herself how much she’s improved. But if you haven’t bought a dress for her to wear that shows off her loveliness, she’ll surely come in last place and straight up hate the fact that you urged her to do it. Some of these surprises may not be surprises if you consider your own starting condition when you set up the game. Besides deciding things like her birthday and blood type (which can be indicators to her lucky days and mood swings), you also choose your own background, whether you were a retired knight, a rich merchant, or a simple street bard. If you know you were kind of a street rat prior to becoming a father, there’s a good chance your daughter will learn your shrewdness and perhaps be great at being a bar waitress, but not so much a nursery worker. Then again, cajoling her into taking care of kids might curb her attitude and remind her about the morality of life. And it’s all worthwhile when your daughter eagerly reports that she’s made a rival at her Etiquette Class and now she’s going head to head to prove she’s MORE high society than this other chick. Marvellous!

Princess Maker thrives on replay, which is why some of the runs you do can be well under two hours (and even faster once you get the hang of the patterns you want to run). Not only is it essential for players to want to see all the different events that crop up (I wanna buy the Fruit of Knowledge!), it’s how you see all of the bananas endings that exist within the game. Sure, maybe you can end up becoming a princess, that’s cool, but who will you be princess to? The King? Pft, he’s just a human! Why not become the Cat Princess? Or the Princess of Darkness? Hell, you might become Queen of the Faeries! You can forsake marriage altogether and become a great dancer, or writer, or even boss of the mines. I got to be a cultist once, which tells me what a terrible job I did as a father! It’s fascinating to see how the chips fall, and Princess Maker: Faery Tales Come True has a wide variety of endings that come from careful selection of classes and vacations, vocations and events, and whether or not I keep buying the smiles from the shop because they’re free and I blew all our money on delicious meals. 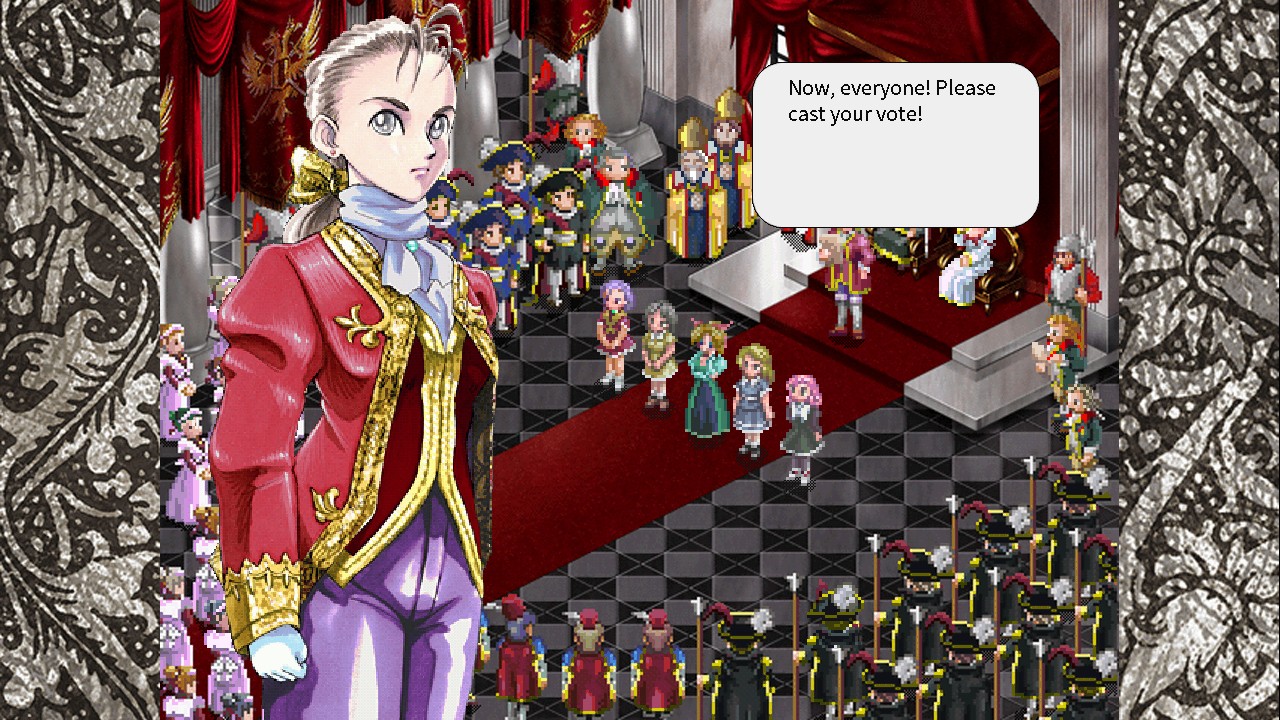 The shortcoming complaints of the game are ones that are mostly technical, but they can get annoying very quickly. First and foremost, the plus and minus buttons on the Switch are worthless in the dumbest way. If you are trying to open up a menu option, it’s not these buttons. Pushing – or + results in the game confirming a controller pairing. While this might be good for the very slim time when you’re playing Princess Maker: Faery Tales Come True and you’re moving from handheld to tabletop gameplay but also want to change to your Bluetooth controller, I guess it’s convenient. For the other 99% of the time, it’s worthless and feels like a super strange choice of permanent button mapping. Additionally, for reasons that only the localizers know, the signs indicating events haven’t been properly translated. I don’t mean they’re in wonky English or still in Japanese, I mean they’re written in Hangul, which is such an odd place to slip. When this game came out on the Switch, there was a cornucopia of broken sentences, game crippling bugs and general misery that the Steam score still hasn’t recovered. Now, this game has a lot of fixes and properly set text, and yet I can’t read Korean, so I’m missing some minor things.

Those two areas, thankfully, can be patched with a quick fix from CFK, so players need not worry. However, my other complaint that’s a bit more weighty is that this is less like the Princess Maker I remember and a bit more in a visual novel direction. Princess Maker 2 offered a lot to do in terms of autonomy for the daughter, such as control of dungeon questing and things like that. Princess Maker 3 is more “fire and forget” in terms of setting your daughter loose, which is slightly disappointing. I suppose there’s a bit of subtext there that shows how much we can try and coax our children into going down the right path but we ultimately can’t do the work for them, but this is a video game and I reject that justification. If I can send my daughter to work in the mines at the age of 11 and ignore her complaints because I think she needs more money (also, she’s mining clean coal) then I should be able to control her mining like a mini game of some kind. It’s a silly complaint, but it’s one I wouldn’t have if I didn’t know an older game in the series had better mechanics.

Still, Princess Maker: Faery Tales Come True is a good starting spot for the series on the Switch. It’s got good visual and aural presentation (and some fairly decent voice work), and it’s easy enough to jump into without needing to get up to your eyeballs in the lore. You can play the whole run in one sitting, or quickly save and drop out to reconsider your life before sending your girl back to hit the books and try to become the next Archbishop of the Kingdom. Also, just remember, there’s still a weird chance she might marry you: that never chances and it’s always a bizarre and difficult ending to get. If you’re interested in a very different simulation that is charming, enthralling and just a bit too strange for some tastes, then this is still a unique path to go down. Just keep in mind that these sales may help bring Princess Maker Refine 1&2 to the Switch, and that’s the fairy tale ending I’m most excited to achieve.

Find out if your the kind of parent who raises a Princess, a Soldier, a Concubine or any other number of endings when parenthood is thrust upon you.