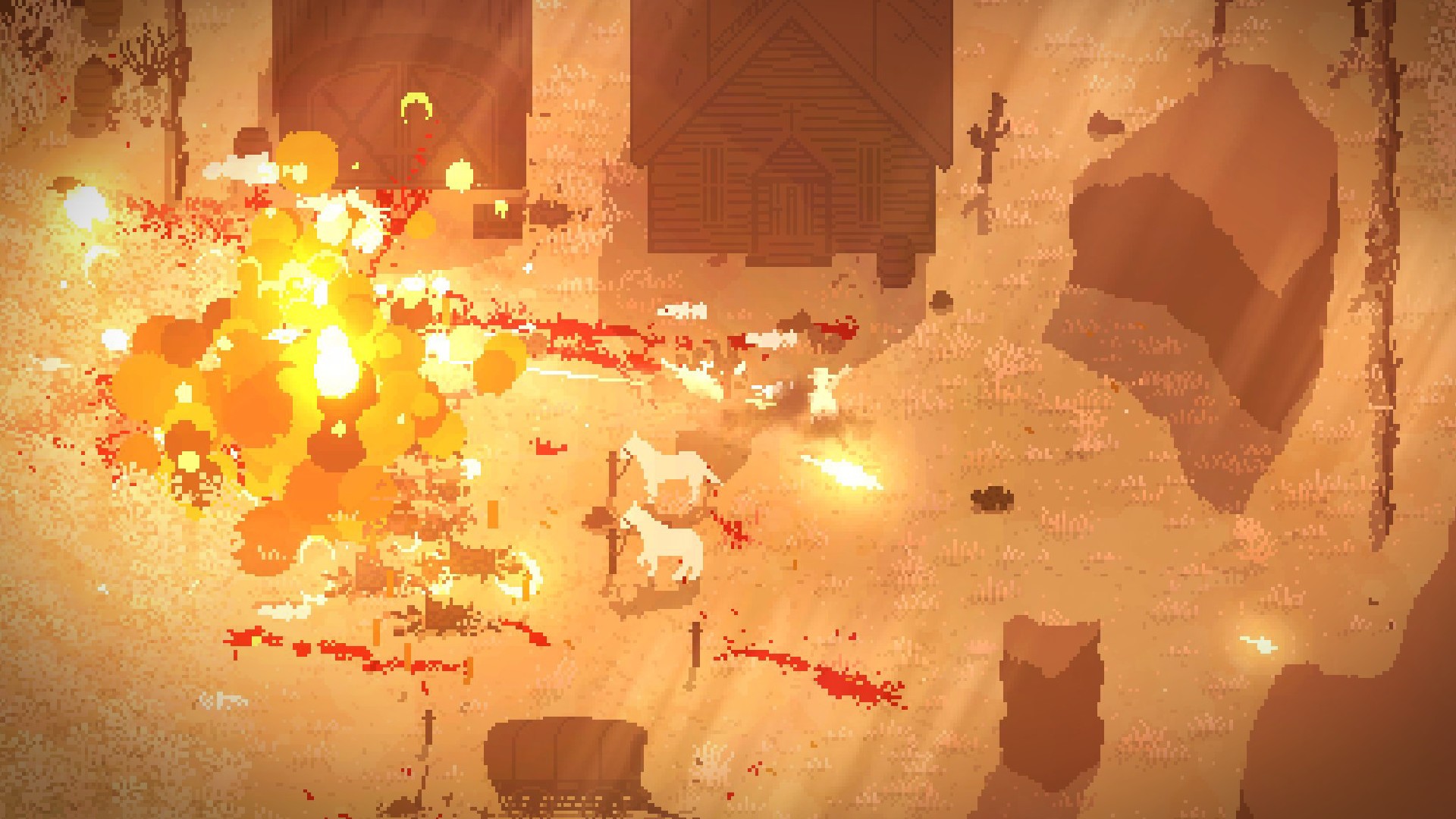 There are only a handful of western games I found influential in my progress with video games. Gun, Sunset Riders, and Red Dead Redemption were the staples I looked to when comparing the western genre. Colt Canyon has the feeling of a retro game, but the allure of a new experience every time I loaded up. It kept me interested enough to see what else I could try before everything on the screen tried to kill me.

Colt Canyon doesn’t hold back on being a challenge. From the start menu, it feels more like an action arcade shooter vs. the roguelite genre’s brutal nature of no save points and permadeath. If you can get past the idea of everything trying to kill you and defend yourself, Colt Canyon is a rewarding experience, even with its unexpected twists and turns, such as a scorpion randomly spawning and taking you down before you can scavenge barrels for health.

The game is arranged in a basic structure. After I picked my current gunslinger for my current play through, I was thrown into a randomly generated area, riddled with dogs, other cowboys defending their territory, and horses that accented the area. The horses didn’t offer any purpose other than you can either release them or if you stand behind them, they may kick you and you’ll take damage from it.

The most interesting variant enemy was the rope wrangler. Their ability cancelled out my attacks and made me drop all of my ammo and gear I gathered throughout the level. The only way I dealt with them was quickly and decisively and then moved on. Hesitation led to me restarting the game a lot, as the idea of everyone wanting you dead was passive throughout each area.

The controller is something I had to look up and memorize. The more times I died, the more each button made sense to me. Right bumper would toss dynamite, which can be used to clear crowds of enemies or free hostages, which I’ll explain a little later in this review. Your gunslinger can hold up to two weapons, which you can switch on the fly with the Y button. The good thing about ammo was you can find as much as you can through fallen enemies or rolling through a bunch of barrels. You’re able to upgrade your ammo capacity as well as your health, as long as you find a hostage in an area that you freed. Of course, another option, depending on your play style, is to free a hostage and slap a weapon in their hands. Thankfully, they have unlimited ammo and will help you out sufficiently as long as you are close by to them.

Freeing hostages play a vital role in your adventures surviving the west. As soon as you clear the area of enemies, or do your best to secure the area, you’re able to walk up to a tied up hostage with a word bubble of, “HELP ME!” and free them. From there, they give you various upgrades to make the game easier for your gunslinger, or you can enlist them to help you out. I never got far with enlisting over two other helpers, but the extra needed firepower came in handy against surprise attacks or even distracting the main boss while I switched out weapons on the fly to take them down. 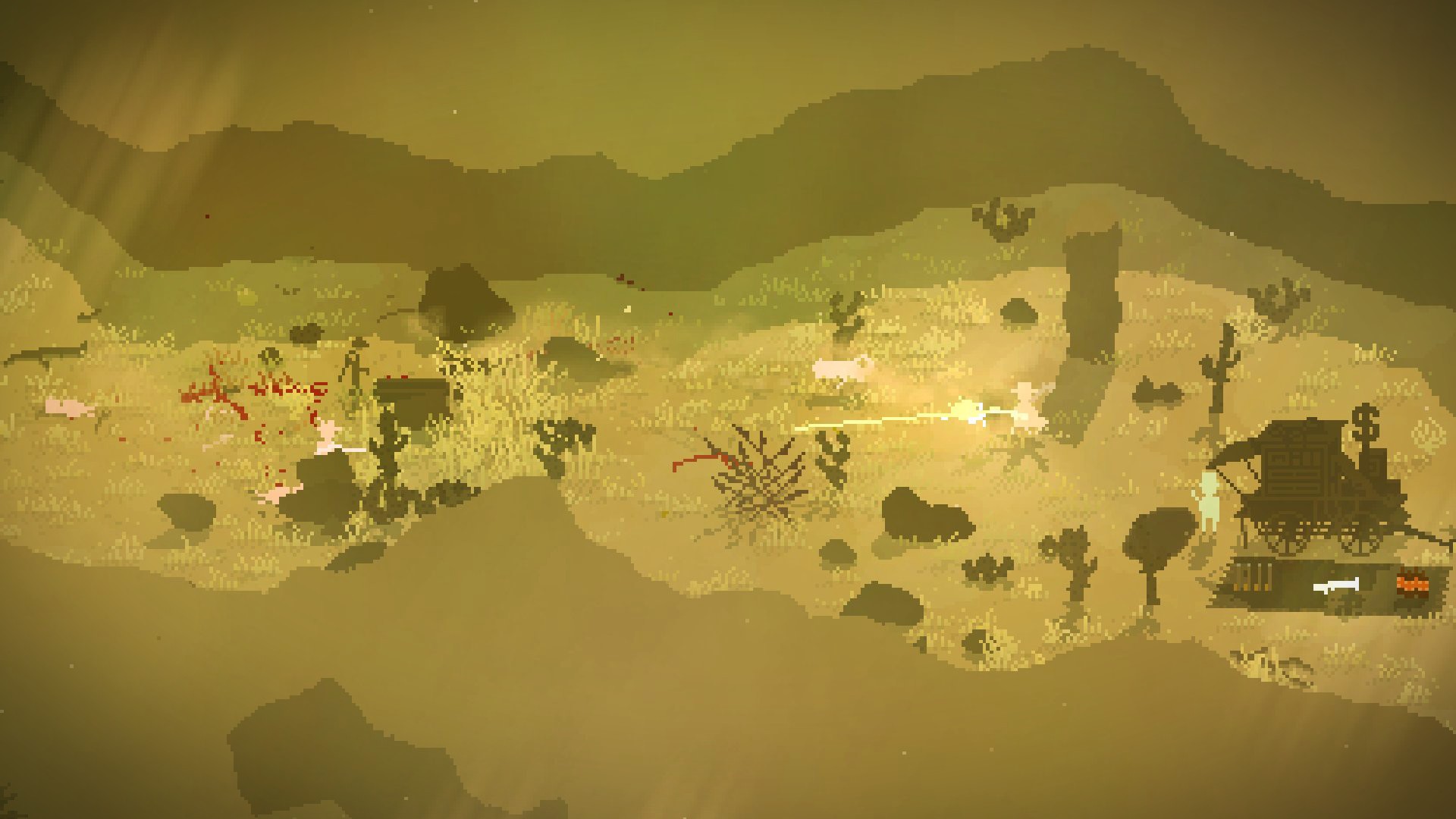 The other upgrades you’re able to get are to increase your damage with each weapon, increase the amount of supplies each enemy drops, and along with the basic controls as listed above, you must reload your weapons and monitor your health bar. Shotguns do the most damage and are comparable to being blasted by a pixelated popcorn cloud. I usually avoided them based on the slow speed, but if I wasn’t lucky enough to dodge, they took a chunk of my health down. An important resource in this game was enemies. As long as you find bandits and other western inhabitants trying to hunt you down, you will have a better chance of restocking on supplies.

A particularly fun function of your gunslinger, as mentioned briefly earlier, is the dodge roll action. This was a fun, yet comical ability of your gunslinger to dodge any attacks as well as break everything in your way, but mainly a random assortment of barrels or crates that may hold important supplies to keep going in your play through.

During my many runs in this game, I came across a variety of weapons. All of them ranged from long-barreled pistols, all the way to a personal favourite of mine, the TNT launcher. The great thing about each weapon I picked up is they all had different enough stats to be balanced. For example, the long barrel pistol may do more damage, but it takes five seconds extra to fully reload. The TNT launcher was a lot of fun to use, but it held only 3 rounds and was slow to detonate.

Death was a big presence in this game. This game was designed around trying more than one time to see how far you can make it. It’s a game of endurance, pushing you to explore the areas more thoroughly, preparing yourself for the danger ahead. I would tread through the basic set of three areas, then there would be a boss fight. It was one overpowered character, along with a decent sized group of eight to ten people that were constantly shooting at me. I also want to mention I was better prepared for the boss fights because of the surprise attacks that would happen to me. What I mean by this is as I entered a new area, a group of ten to twelve people would start firing at me, for no reason other than I showed up in their territory. Being a pacifist didn’t help me out, as I went for a no shooting run, but eventually all the random enemies would pop up with a “!” and immediately chase me down.

Tying back to the freed hostages, depending on how far you got into the game, you could unlock new characters for a brand new play through. These characters ranged from the bow and arrow specialist, but they were bad with any guns, a heavy weapons specialist, but they moved slower to traverse the level area, and someone that specialized in a solid rifle load out when they started. I love how the game offered a variety of choices to start the game off, but it also made it play differently enough where each unlocked character didn’t play the exact same.

The soundtrack was another great highlight of this game. Even in chip tune form, Colt Canyon did a great job at creating the perfect ambience of roaming the western landscape. It changed in tempo as I was gun slinging at enemies and slowed down while I was just exploring each area trying to stock up on loot. 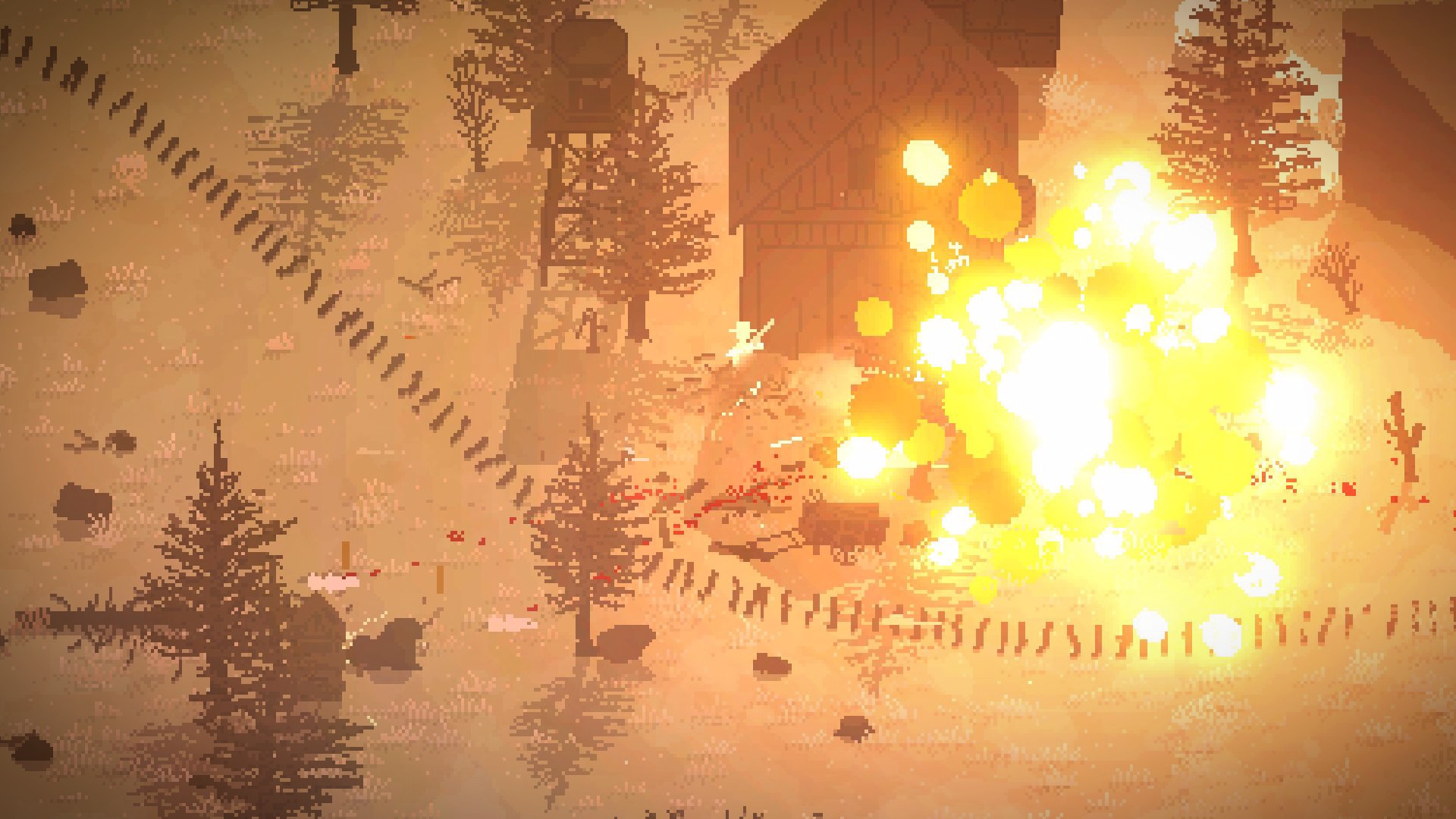 One of the strongest highlights of Colt Canyon was the graphics. It has roots to the Atari based games that video games began with, but the details in the atmosphere and the animations are what carries it to success. I admired the scenery when I wasn’t being chased off by outlaws and other cowboys. As pixelated as the environment was, the detail in how everything interacted with each other told the story and I wasn’t left guessing how it factored into the western setting. Instead of being static elements that populated the screen for aesthetic purposes, you have tied up horses in motion on their posts, random inhabitants near the barn picking through the tall grass, and even the animals (who haven’t made eye contact with you yet) rummaging around the area, looking for anything to chase at.

Colt Canyon brought a lot of interesting ideas to the playing field to make it fun, but it also had some small problems that held it back. First, it would have been nice to have some sort of checkpoint system after traversing X amount of levels. I understand it would defeat the purpose of “challenging the player” in the rogue-lite setting, but going through three to four areas, then getting taken down by a scorpion in the wild is frustrating to say in the least. The next thing I wish this game had was more variety in ammo types. The only other upgrade for weapons I found was an incendiary based ammo, but I’d like to see other things such as poison dipped bullets or arrows.

Next, the game lacks a direct story. You can interact with the characters in each area, but there isn’t a narrative dialogue to tell you why you’re roaming the landscape. What is your purpose? I understand you’re freeing hostages that get themselves in sticky situations, but there has to be more than that as an objective.

The last thing I’d like to see them improve in a future sequel or expansion is more commands for the helpers you get. As of now, you’re able to give them basic attack or move here commands, but it would be great if you could tell them to scavenge for ammo, clear a path, or even provide a distraction, in which I imagine them throwing anything they had to draw aggro away from you.

This game had a lot of fresh ideas to a game genre that is often overlooked for its simplistic nature. I enjoyed roaming around the old west, collecting everything I could and trying to avoid fights when it was necessary. It was interesting how after each time I died, it listed how many “innocents were killed” as a stat to my gunslinger adventure. There aren’t a lot of western games that I know of nor have played that have drawn my attention for more than a couple hours, but Colt Canyon is a solid entry in the western games field.

Colt Canyon runs for the price of $14.99. I can confidently recommend this game to anyone that wants a quick arcade twin stick shooter to play and not have to think about much. Yes, you will die a lot, but if you can get over the adaptable learning curve, you will have a great time. If you can keep an eye out for seasonal sales on Steam or the platform of your choice, this is something to keep on your radar. And what’s also great is the Co-op feature, which a friend can drop in seamlessly to help you out.

Survive the old west in this frantic, yet intriguing twin stick shooter!